'Super Mario Odyssey' reminds us why we love Mario

The first Mario game on the Switch has the makings of a new classic.

Super Mario Odyssey is the most exciting Mario game in years. Sure, the two Galaxy entries on the Wii were inventive, but Nintendo's first Switch game in the series goes a step further and completely changes the way you've come to know Mario. It introduces entirely new powers and customizable outfits, and it brings Mario into strange new worlds. Simply put, it's precisely the Mario entry Nintendo needs right now -- one that'll satisfy longtime fans and entice new Switch owners.

Super Mario Odyssey continues the legacy of Mario 64, a game that will forever be remembered as a pioneering 3D platform. This time around, though, the environments are much bigger than before, with plenty of nooks and crannies to explore. Unlike the round, self-contained worlds from the Galaxy games, every world in Odyssey feels rich and expansive.

Cappy, a magical hat who replaces the plumber's battered old hat, is the co-star of Super Mario Odyssey. Mario can throw it to attack enemies, but what's truly new is that it also lets you "capture" enemies to control their bodies. That opens up entirely new types of scenarios: Possessing a Goomba lets you create towering stacks of them, while capturing a fire monster lets you easily swim through molten lava. The cap system is reminiscent of the suits we first saw in Mario 3, except this time you're ripping power directly from your enemies. It's the sort of thing that makes Mario Odyssey feel completely fresh. 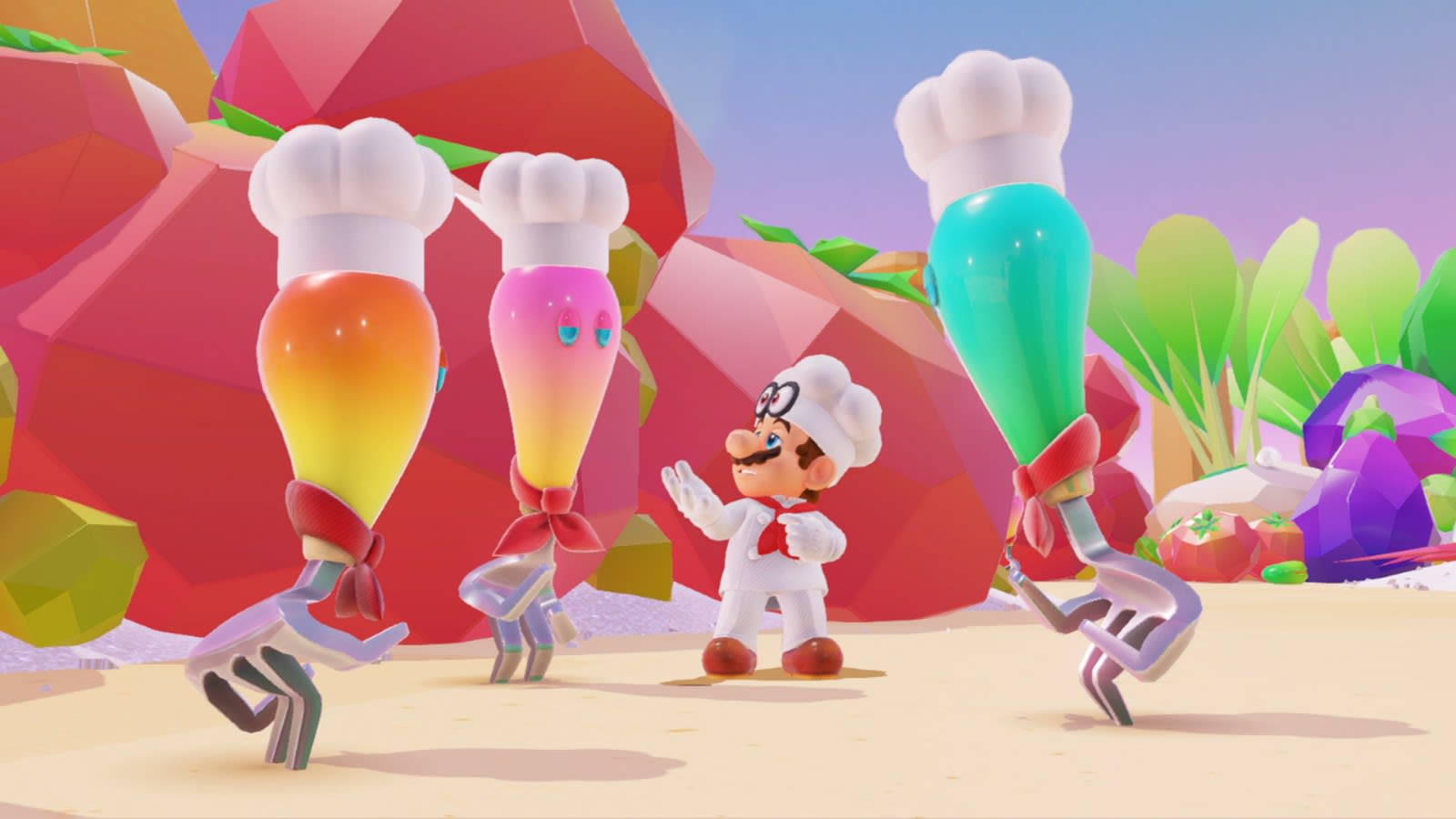 During my hands-on time with the game, I was always curious to see what sort of power a new enemy could give me, as well as how it fits into the puzzles that you need to complete to finish every level. Of course, such a new mechanic has a bit of a learning curve. I spent my first few minutes with the game learning how to accurately throw Cappy around. By holding down the attack button, you can also make Cappy spin in place, which lets you jump on him as a makeshift platform. It wasn't long before I was throwing Cappy at everything.

Super Mario Odyssey brings over all the 3D controls that you're used to: Running and jumping felt as smooth and accurate as in Galaxy. And yes, the butt stomp is an essential part of the game. But now Mario can also roll to get around the world a bit faster as well as to knock down enemies. (It definitely looks like he learned a thing or two from Sonic.) There's also a spinning attack that lets you hit several objects or enemies at once.

When you're not running around and fighting off bad guys, Mario can also interact with non-playable characters in every stage. They usually offer some help and context for what you actually need to do. But I also appreciated how they made the two levels I saw feel truly alive. Their presence makes Odyssey almost seem like a Zelda adventure that happens to star Mario. 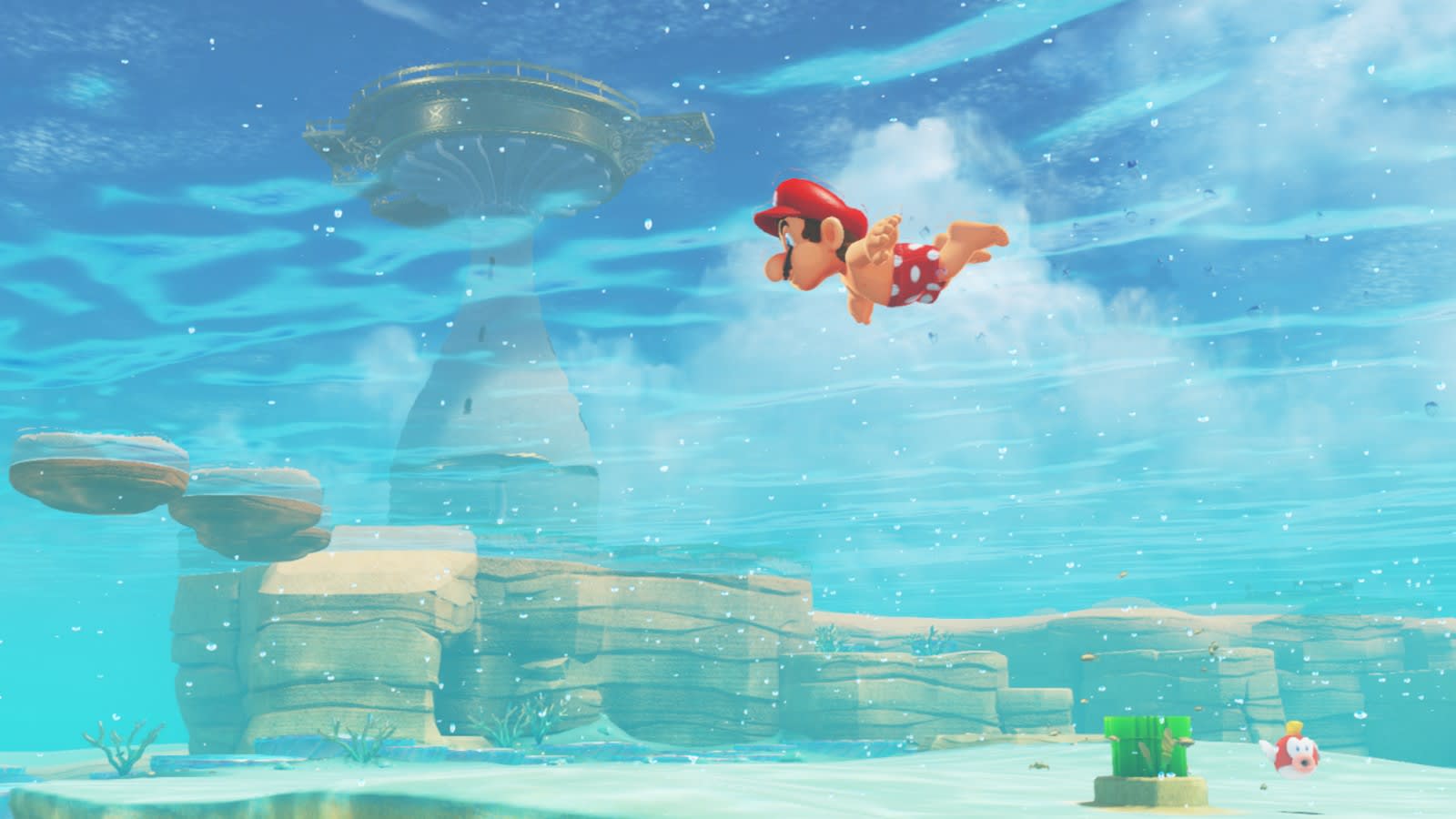 I had around an hour of time with the game, and it didn't take long for me to fall in love with it. That's a bit surprising, since I wasn't impressed with what I saw from early footage, especially Mario running around "normal" humans in New Donk City. Perhaps it was just the aesthetic of that stage that bothered me -- if that's the "real world," does that mean Mario isn't even human? (Nintendo says he is, for the record.)

Super Mario Odyssey looked great on the Switch when it was both docked and handheld. It's the sort of game where extra precision would be helpful, so I definitely preferred using the Pro Controller when playing it on a couch. It also supports motion controls for jumping and throwing Cappy directionally, but I preferred doing all of those things with the normal controller buttons.

As usual, there is a plethora of things for you to find throughout the game. There are mysterious moon pieces scattered throughout every level, which help to power the Odyssey, Mario's airship. Coin collection is a big part of the game too, but this time around coins also let you purchase new outfits for Mario. In addition to being simply adorable, they also unlock new areas. In one stage, I couldn't enter a door until I was dressed as a chef.

There's also a photo mode, which allows you to freeze time, reposition the camera and apply filters to snap your perfect Mario Odyssey moment. It's the sort of thing we're seeing in plenty of games these days, but that doesn't make it any less fun. And given just how expressive Mario is now, I expect to spend a big chunk of my Odyssey playthrough collecting photos. 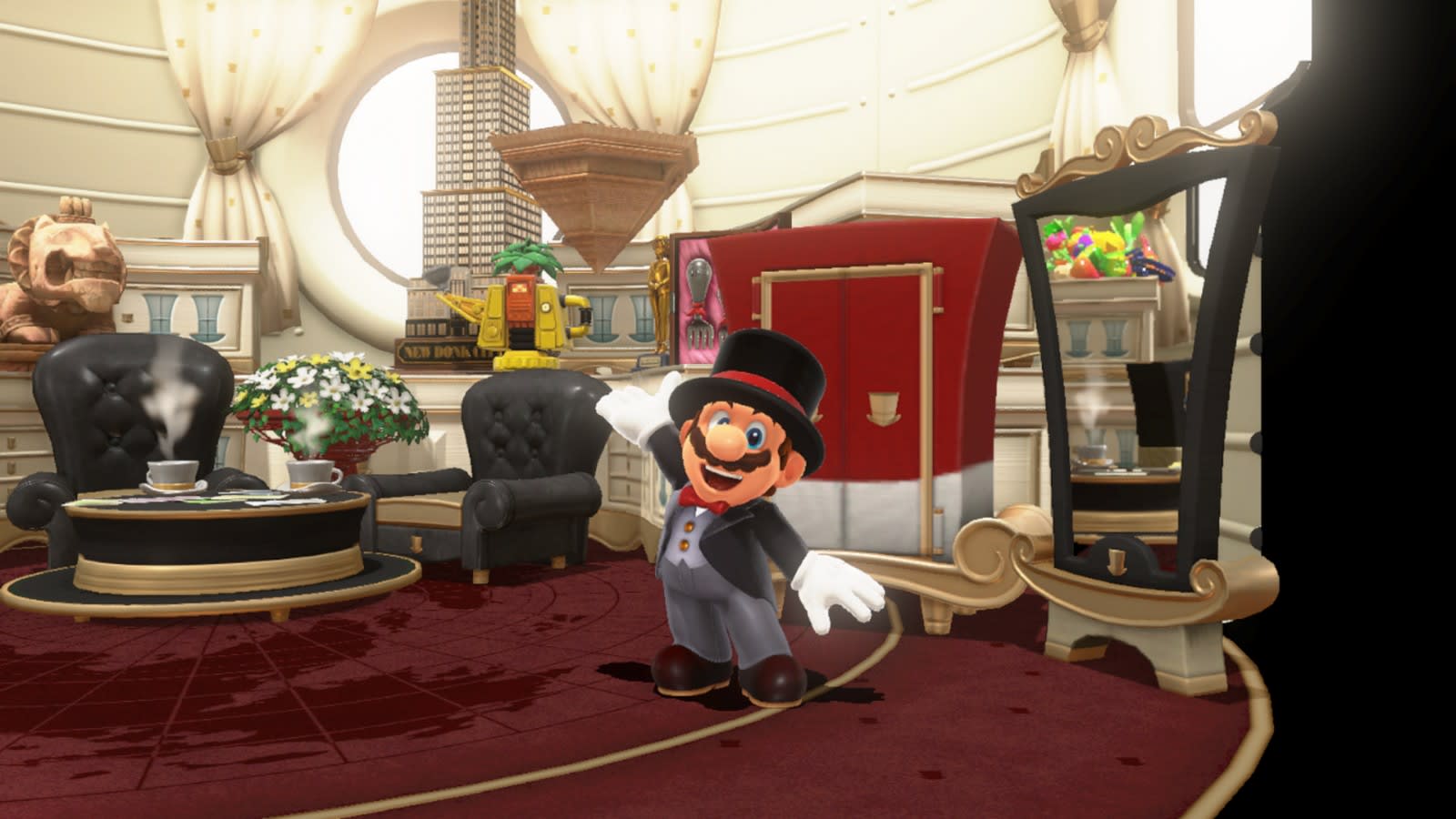 The few boss battles I encountered were a blast, as usual. They typically build on the powers you find throughout each stage, and I got a thrill out of figuring out just what I needed to stomp out the bosses. I can't say too much about specifics yet, but they'll surely bring a smile to your face. (And I can't wait until everyone sees the glory of Meat Mario.)

My short time with Super Mario Odyssey left me eager for more. Thankfully its Oct. 27th release isn't too far away. It brought back the joys of playing Mario when I was a kid -- like the thrill of learning how to use pipes for the first time in Super Mario Brothers, discovering new suits in Mario 3 and diving into the sheer perfection of Mario World on SNES. From what we've seen so far, Odyssey could shape up to be another classic Nintendo experience.

All products recommended by Engadget are selected by our editorial team, independent of our parent company. Some of our stories include affiliate links. If you buy something through one of these links, we may earn an affiliate commission. All prices are correct at the time of publishing.
'Super Mario Odyssey' reminds us why we love Mario
art
av
entertainment
gaming
Mario
nintendo
SuperMarioOdyssey
Switch