Virtual reality has made a lot of progress lately toward looking and sounding better, but we're still in the early stages of making it feel better on a tactile level. Standalone headsets like the upcoming Oculus Go and the just-announced HTC Vive Focus will definitely improve the experience by eliminating that pesky umbilical cord that connects you to a computer. However, the realism of many of these simulated worlds is still hamstrung by the need to handle a controller in order to interact with anything. HTC's Vive Tracker, available for pre-order today, goes a long way toward making VR feel more true to the experience it's meant to be simulating, replacing the usual plastic wand with accessories that can emulate the weight and feel of real-world tools like sports equipment and projectile weapons.

We first saw the Vive Tracker at this year's CES, where my colleague Devindra Hardawar got to handle a full-sized rifle to shoot virtual baddies. The initial crop of tracker accessories doesn't include anything even close to that size and heft. Instead, the Hyper Blaster is a handgun that aims to replicate the look and feel of the classic NES Zapper down to its clicky trigger and garish grey-and-orange color scheme. The tracker screws onto the barrel of the gun, with a row of gold connector pins allowing signals from the gun to reach the tracker with no discernible lag. To accompany the retro look HTC is bundling the blaster with the game Duck Season, a horror game that resembles an updated version of Nintendo's classic Duck Hunt. The game still requires usage of a standard Vive controller in your non-dominant hand, asking you to put the two peripherals together like you were holding a real shotgun. Unfortunately, just as Devindra experienced back in January, the game lost sync with the tracker for a bit, causing me to miss at least two targets. Otherwise, the experience was enjoyable, with the trigger satisfyingly clicky and the in-game responses instantaneous.

The other major peripherals available at launch are a tennis racket and a ping pong paddle, packaged together in a bundle with the tracker and the game Virtual Sports. The two accessories gave me flashbacks to a decade ago, when you couldn't walk into a game store without seeing a pile of cheap plastic tennis racket and golf club shells for your Wiimote. Thankfully, the Vive Tracker peripherals are solid and hefty, and once I put on the Vive headset I couldn't tell the difference between a real paddle and the accessory I held in my hand. I played a quick round of table tennis and found myself turning and flipping it in my hand to get spin on the ball. The experience was immersive enough that once I finished playing, I tried to put the "paddle" down on the "table," forgetting that there was nothing actually there. But if I had actually dropped it on the floor, the build of both the accessory and the tracker itself seem sturdy enough to survive the fall.

HTC also has plans to make your body into a game peripheral, selling a pair of straps that will allow you to place the tracker on your arms or feet. Each TrackStrap set comes packaged with the game Redfoot Bluefoot Dancing, which I didn't get to try. I instead kicked dinosaurs in the shooter Island 359, which was ineffective in defeating them but still deeply satisfying. Full-body tracking for that title will be available starting in December, while games like Climbey, Holodance and High Fidelity are already compatible. 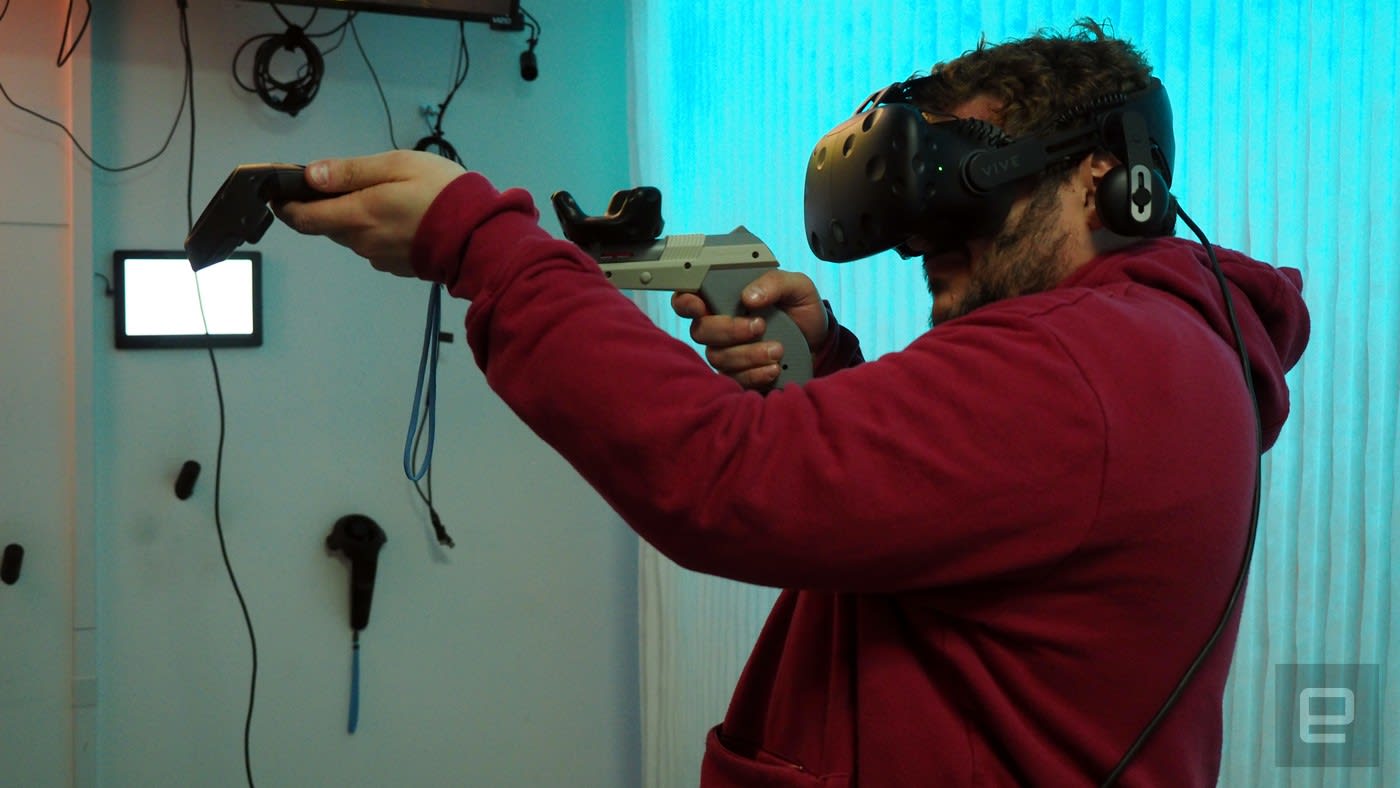 The biggest issue for the Vive Tracker is that the selection of compatible games is still rather small. At the device's launch next month there will be six titles for the blaster and six for the racket peripherals. However, HTC is committed to adding at least five more games by the end of December with another 10 coming early next year.

The basic tracker ships in December and runs $100, while the two bundles will cost $150 each. The TrackStrap sets go for $25 a pair plus the dance game, but don't include a tracker. It's a bit pricey, but if you've already invested in a Vive and a computer good enough to run it you might be willing to part with the cash needed to further optimize your VR experience.

In this article: av, gaming, gear, htc, htcvive, hyperblaster, hyperkin, personal computing, personalcomputing, video, vive, vivetracker, vr
All products recommended by Engadget are selected by our editorial team, independent of our parent company. Some of our stories include affiliate links. If you buy something through one of these links, we may earn an affiliate commission.