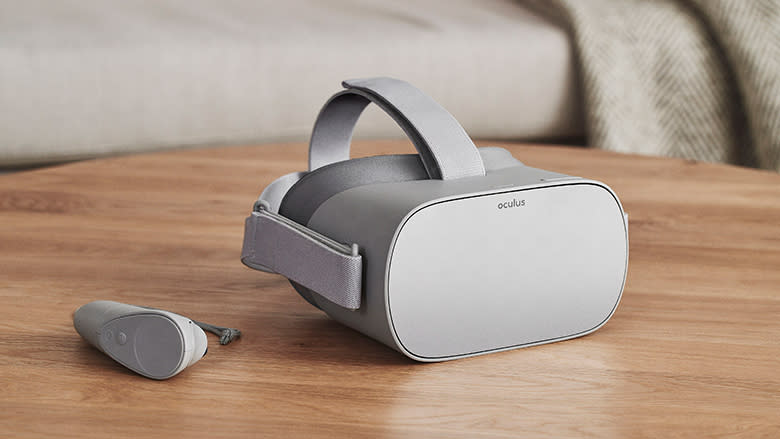 While Oculus has pioneered the modern consumer VR industry with the Oculus Rift and Samsung's Gear VR, it's been working hard on a truly wireless VR solution as well. Last year, Oculus teased that it was planning on a powerful standalone VR headset called "Project Santa Cruz," and earlier this year, there was news that Oculus was working on yet another tether-free headset codenamed "Pacific." Now, the company is finally ready to unveil its first standalone headset, that's a little more accessible than the Santa Cruz. This is the Oculus Go.

Again, to be clear, this is not the same as Project Santa Cruz -- that still exists as a separate product. The Go is positioned as a VR headset that's in between the Rift and the Gear VR. Unlike the Oculus Rift, which needs to be tethered to a PC, or Samsung's Gear VR, which requires a phone, the new Oculus Go is entirely self-contained. CEO Mark Zuckerberg says this is the "most accessible VR headset ever." It has cameras on the headset and uses computer vision tech to figure out orientational tracking. It will sell for $199 and will ship early next year.

The Oculus Go has a new mesh fabric that conforms to your face. According to VP of VR, Hugo Barra, the headset has a soft elastic strap and comes equipped with next-generation VR optics. It ships with all new optical design, with lenses that are the next generation of the ones on the Oculus Rift. It has the same wide field of view as the Rift and promises significantly reduced glare.

As for its display, it's a "fast-switch LCD" with WQHD 2560X1440 resolution. According to Barra, it has a higher pixel fill factor than OLEDs, with a "dramatic effect on visual clarity" that "reduces the screendoor effect."

What's more, it even has an integrated spatial audio experience. That means the audio drivers are built into the headset, and you don't need headphones to listen to the sound. That means that the people around you can listen in on the game or experience as well.

As for the apps, Barra says that they are binary compatible and it shares the same controller input set as the Samsung Gear VR. This means that apps that are built for the Gear VR will also be compatible with the Oculus Go. It features orientation tracking and will ship with a controller similar to the one for the Gear VR. Dev kits will ship in November.

In this article: av, facebook, gear, go, oc4, oculus, oculusconnect4, oculusgo, personal computing, personalcomputing
All products recommended by Engadget are selected by our editorial team, independent of our parent company. Some of our stories include affiliate links. If you buy something through one of these links, we may earn an affiliate commission.