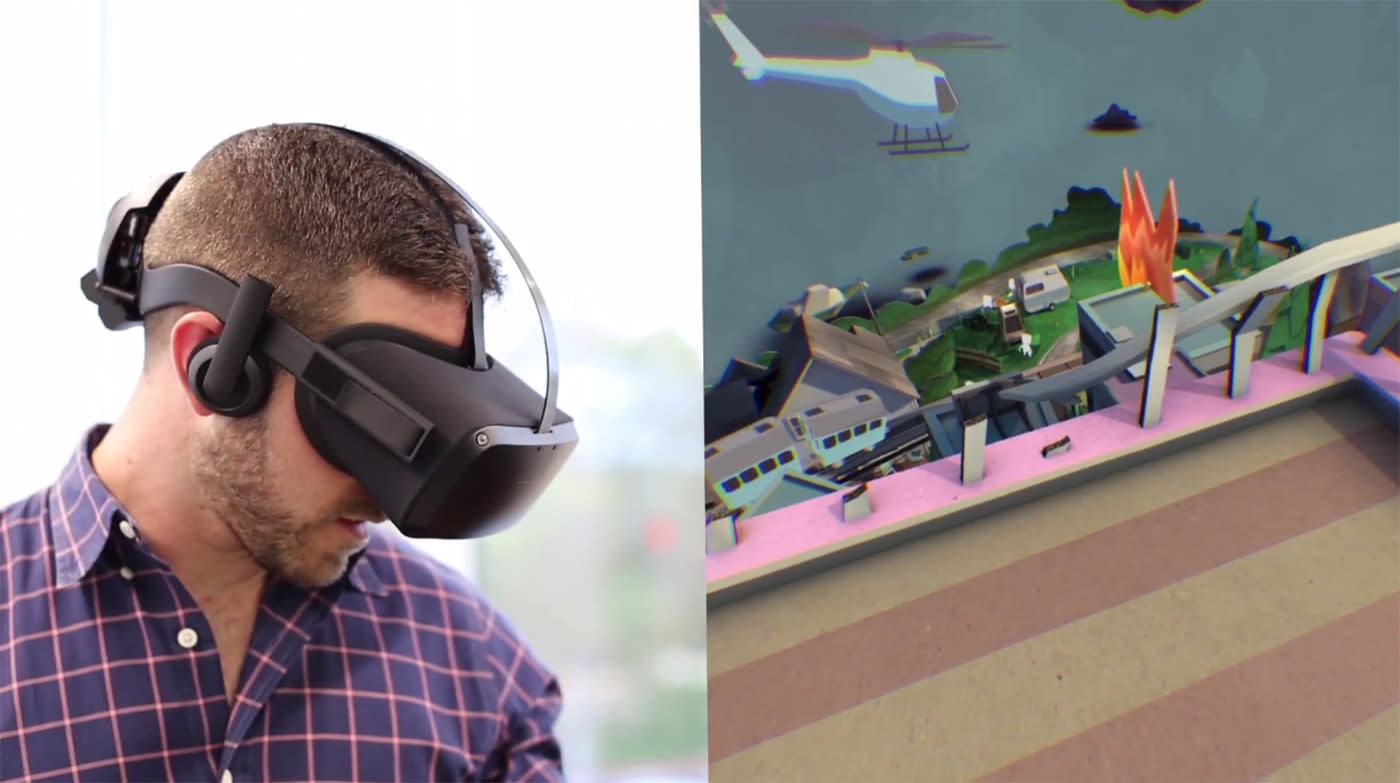 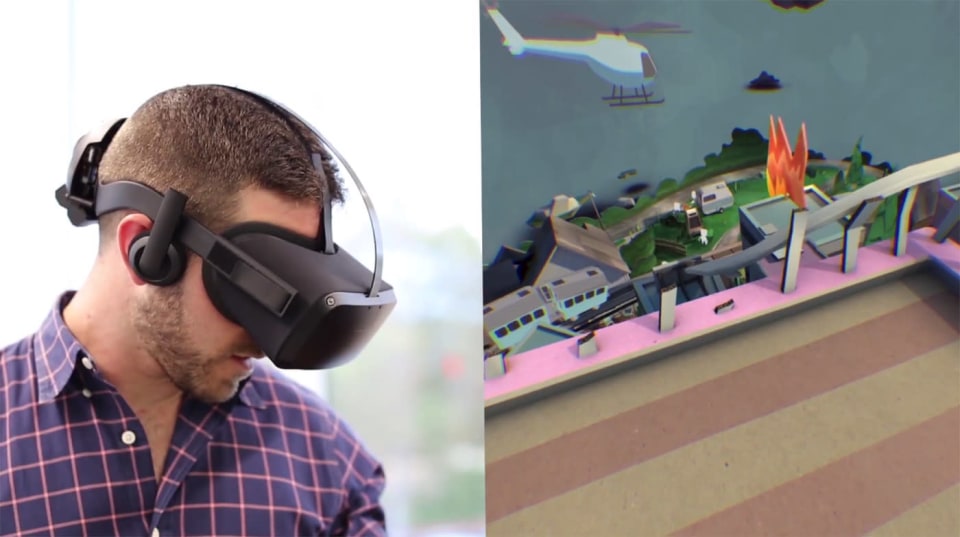 Tucked away inside the dark hallways of the San Jose Convention Center is a meeting room with signs that read "No photos" and "No food or drink." I shook the hands of the Oculus spokespeople who were there to greet me and proceeded to try to get in the door. But before I could do that, I was instructed to leave my backpack, my purse and my phone behind. When I was finally allowed in, I was surprised to see that the room was decorated to look like a giant living space, with a large sofa and chaise in one corner and pillows, books and paintings placed throughout. But I wasn't there to judge the interior design. No, I was there to try the prototype of Oculus' newly announced standalone VR headset. Its name is Santa Cruz.

The hardware, which was announced at the Oculus Connect 3 keynote, sits somewhere between the Rift and the Gear VR. It doesn't require a PC like the Rift, yet it's more powerful than Gear VR. Oh, and it's wireless. What's particularly interesting about the Santa Cruz is that Oculus is using it to show off something called "inside-out tracking," a technology that uses cameras on the headset for positional movement -- so that the game can know if you're crouching or leaning to one side, for example. The Rift requires external sensors for this and the Gear VR doesn't have this feature at all. So to have this functionality simply built-in to a standalone headset is a big deal.

Because the Santa Cruz is strictly a prototype, I wasn't allowed to put my hands on the headset. But I did get a good look at it before testing it. The entire thing looks almost exactly like a Rift, but instead of being attached to a PC, the wires are connected to what appears to be a miniature computer attached to the rear of the headset (the part that hits the back of your head). On the front, there are four tiny cameras, which provide that "inside-out tracking" magic. The prototype was pretty rough; the wires were held with what looked like tape and the internals were exposed. But there was indeed no PC or smartphone in sight. All that's powering my VR experience was that tiny PC.

Before I could wear the headset, I was told to look around the room to get my bearings of where the different objects in the room were located. The idea here is to get a mental boundary, so that I don't run into the couch, for example. Since I wasn't allowed to touch the Santa Cruz, Oculus "helpers" in the room had to put the headset on for me. It was a little awkward, but after some futzing and adjusting, they finally had it on my head.

The first scene I was in was that of an empty space station. I walked all around the stark interior, making my way from one end to the next. It was cool to be able to walk around this virtual space without having wires encumber my movement. But as I approached the edge of the physical room, I saw a blue grid show up, indicating that I was at the edge of the world and could go no further. I asked the spokesperson if they needed to map out the room ahead of time in order to mark out the perimeters for the headset, but was told that no, it wasn't necessary. It's unclear if the Santa Cruz is nimble enough to figure out boundaries on the fly, but at least in the case of this demo room, it seemed to be doing a good job.

Next, I was transported to "Paper Town," which is a fairly common Oculus demo. In it, you're in a city made out of paper -- of course. People are yelling, there's a house burning and oh, there's a UFO too. I crouched around, leaned from side to side, and could even peer over balcony railings and look behind objects. It was a lot more interactive than most Gear VR experiences and was on par with how I've felt in Rift games.

And, well, that was it. The Santa Cruz demo lasted for only a few minutes. I asked if it would eventually support Oculus' Touch controllers or if it would be compatible with the same titles as the Rift, but all Oculus could say was that it's far too early to tell. Right now, the Santa Cruz prototype is simply a proof-of-concept that its "inside-out tracking" works. It could very well develop into a separate, standalone VR product. But the company could also use that same technology and integrate it into the Gear VR or a future Rift, perhaps transforming those into standalone headsets themselves.

The experience was short, but it was pretty great. There are no sensors and wires to worry about. You can just put on the headset and get started, no PC or phone required. There are other standalone headsets out there -- Alcatel has one and Intel's working on its own version too -- but it could very well be Oculus that gets it done right.

In this article: av, facebook, gaming, gear, inside-out tracking, insideouttracking, oc3, oculus, oculusconnect3, oculusrift, prototype, santacruz, virtualreality, vr
All products recommended by Engadget are selected by our editorial team, independent of our parent company. Some of our stories include affiliate links. If you buy something through one of these links, we may earn an affiliate commission.