Just a few months after hitting the market, there's already a new model of the first smart mirror you can actually buy. The HiMirror Plus boasts incremental upgrades that make it a better companion for selfie and beauty lovers. It costs $259 -- that's $70 more than the original -- and has a new ambient light to simulate different lighting conditions so you can better apply your makeup (and, let's be real, take fantastic selfies). The company also unveiled an accessory called the HiSkin -- a handheld scanner with optical sensors that you can place on your face (or any part of your body, really) to get a better read on your complexion. I used a HiMirror Plus for a few days ahead of CES and then checked out the HiSkin here at the show, and I'm skeptical that they could help improve my skin.

Gallery: Hands-on with the HiMirror Plus and HiSkin | 12 Photos You might have read my hands-on with the original HiMirror, which I saw at a briefing in November. Since then, the company has added a few software updates that integrate playlists of how-to videos on YouTube. But the most obvious difference between the two generations is the addition of what the company calls ambient lights to the long sides of the device. You can press a button to scroll through different scenes, such as daylight, restaurant and sunset, and the lights change color to simulate the selected setting. The idea here is that if you know what your face will look like in the place you're going, you'll be able to better tailor your makeup for the situation.

During my time with the Plus, I never found this tool all that useful for adjusting my makeup, since the different lights in my bathroom, bedroom and living room did a good enough job of giving me an idea of what my face would look like in all of my anticipated environments. I did, however, get a huge kick out of taking a ton of selfies in front of the mirror, playing with the lighting until I achieved the most Instagram-worthy effect. Basically, then, there's no real utility here other than goofing around and growing an Instagram following. 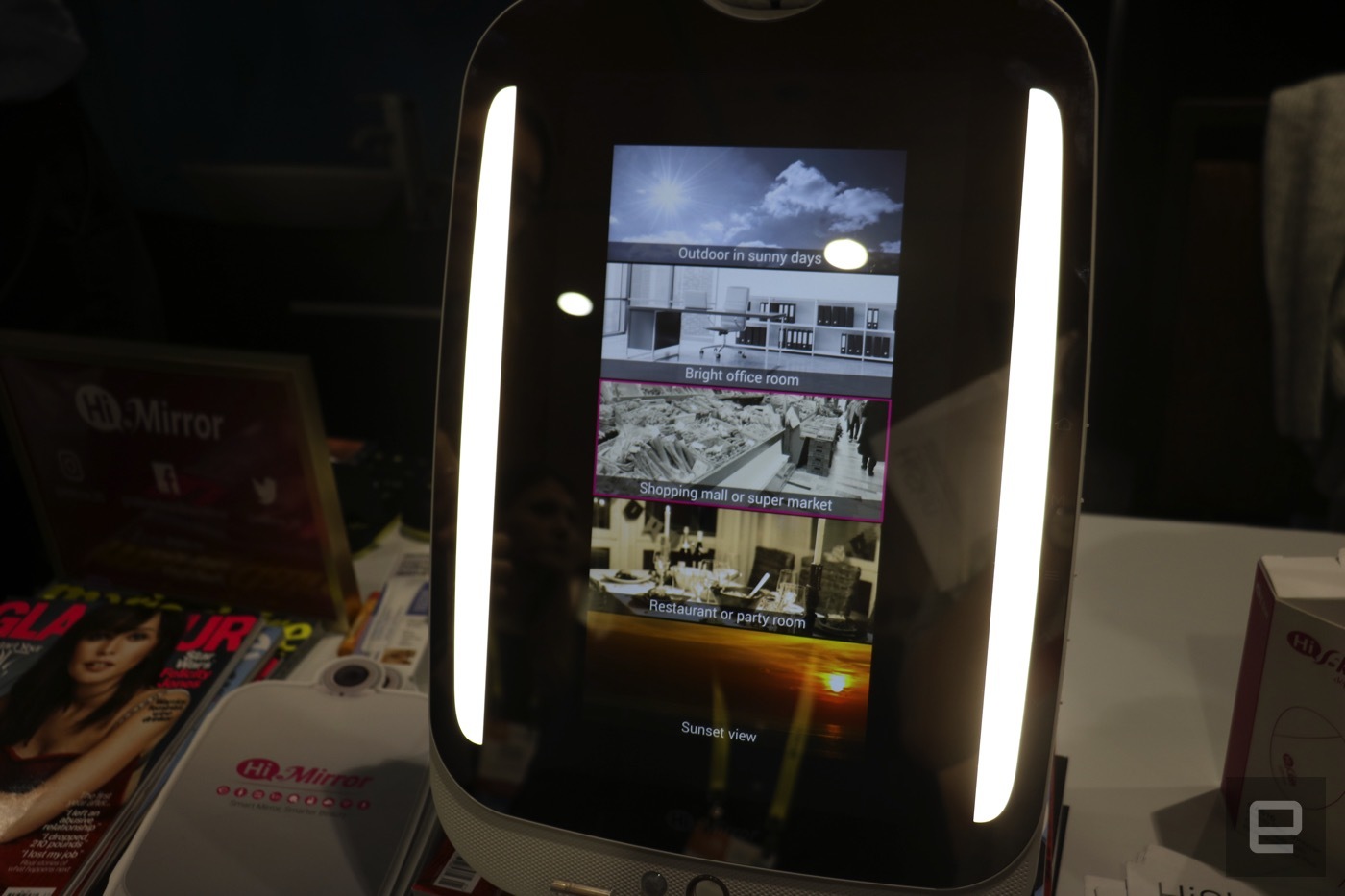 Those who are that dedicated to their social media careers may find it worthwhile to get the Plus over the original mirror. What's more, someone who's choosing between the first HiMirror and the new one is most probably as narcissistic as I am and just as likely to enjoy this feature.

Aside from the new ambient lights, the HiMirror Plus is basically the same as its predecessor. Its voice-control capabilities are still limited, and its well-meaning words of encouragement, such as "You can do better!" continue to be funny. Having had one in my apartment for a few days this time around, I can more easily see the device's appeal. I actually wanted to stand in front of the mirror and take a picture every day to see how my skin fared compared to the day before.

Taking a picture for the analysis is fast enough: You hold your hand in front of the infrared sensor that detects your movements, which triggers a three-second countdown before snapping your photo. Getting my results took close to a minute, though, during which I tended to walk away from the mirror to attend to other tasks. It's a testament to HiMirror's appeal that I always came back to check out my results and look at how I did in specific areas such as clarity, dark spots, red spots, firmness and fine lines. HiMirror's target audience is obvious. Put bluntly, it's narcissists such as myself, plus the beauty-obsessed. The company's latest accessory is designed specifically for the latter, who would be more interested in knowing the finer and more accurate data on their skin's level of hydration and melatonin. The device can be paired with the HiMirror mobile app, so you don't actually need to get the mirror to get a read on your complexion. Given the stiflingly dry hotel room I've been staying in the past few days, I can see why someone would want to track how moist her skin is. But it's a niche product that doesn't seem useful on a daily basis.

it's unlikely that the HiMirror Plus and HiSkin will find their way into every home, although they could appeal to a specific audience. Beauty lovers and the plethora of YouTube vloggers creating makeup tutorials will find the smart mirror a useful tool. Widespread adoption, on the other hand, will be elusive.

Click here to catch up on the latest news from CES 2017.
In this article: beauty, BeautyProducts, CES2017, gadgetry, gadgets, gear, hands-on, himirror, hiskin, home, personal computing, personalcomputing, smartmirror, TL17BEAU
All products recommended by Engadget are selected by our editorial team, independent of our parent company. Some of our stories include affiliate links. If you buy something through one of these links, we may earn an affiliate commission.