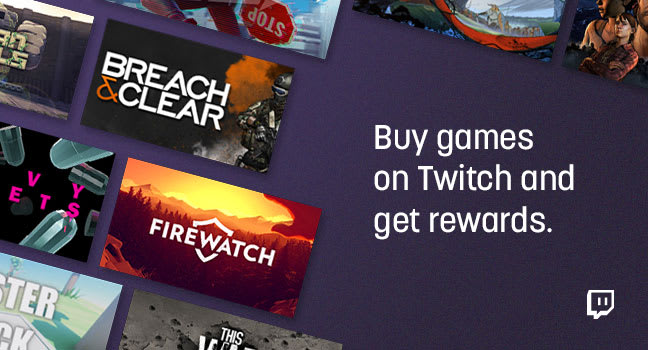 We already new Twitch planned to start selling its viewers a selection of PC games directly through the streaming site. Starting today, the service allows users to purchase a variety of different titles from the site while watching related streams. Over the next week, around 50 games and various add-ons will be available to purchase mid-stream, including Ubisoft's recent big hitters -- For Honor and Tom Clancy's Ghost Recon: Wildlands.

As well as simply selling their games at full price, developers can also use the service to award fans with special offers for watching streams at certain times. It's not just developers who will benefit from selling games, however, with partnered Twitch streamers also set to earn 5% of sales generated through their channels.

Opting to bypass Steam completely, games bought through the site can be downloaded and played through the Twitch Desktop App. Alternatively, users can opt to load games through existing publisher specific game launchers like Uplay. In a bid to get viewers to choose Twitch over the competition, the streaming site is rewarding buyers with free Twitch Crates. These digital boxes will award recipients with a randomized drop of items, including exclusive emotes, chat badges and Bits for Cheering. To entice initial purchases, until the end of April buyers will be entered into a raffle -- giving them the chance to win $500 worth of pro streaming gear.

While the move certainly makes sense, having streamers take a cut of game sales arguably blurs the line between genuine content and paid advertisements. With partnered streamers more likely to make more from the big releases, this could see many content creators streaming games purely to make a buck rather than to entertain viewers. With many YouTubers caught up in similarly shady practices, Twitch will have to moderate partner streams carefully if they want to keep content feeling genuine.

Source: Twitch
In this article: amazon, av, gaming, streaming, twitch
All products recommended by Engadget are selected by our editorial team, independent of our parent company. Some of our stories include affiliate links. If you buy something through one of these links, we may earn an affiliate commission.