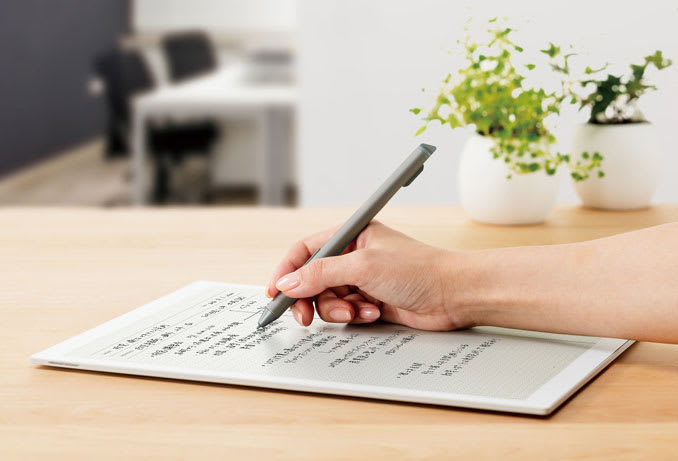 Despite being the only horse in the niche race, Sony continues to develop E Ink devices. The company has tried to sell higher-end professionals on edit-friendly displays since it released the 13.3-inch Digital Paper in 2014, which cost a whopping $1,100. The latest version, DPT-RP1, incrementally improves on its predecessors. But its $700 price tag might still be hard to stomach for a device ultimately trying to out-value regular paper.

The new Digital Paper keeps the 13.3-inch size but boosts the resolution from 1200 x 1600 dots to 1650 x 2200 dots. It's also lighter and thinner, with new quirks like using NFC to unlock. Unfortunately, the model still only reads PDFs. But Sony is also pairing it with a Digital Paper App for desktop that converts websites and documents to PDF form and sends them wirelessly to the DPT-RP1. You'll have to ping the edited documents back to the hub computer to upload them to the cloud, though, as the device doesn't appear to have that capability.

While Sony's slowly driven the price down, knocking $100 off later in 2014 before reaching its current $700 price point, it's still an expensive way to mark up PDFs. And it's no longer the only E Ink-editing game in town, with startup reMarkable's E Ink device launching last fall. But with the latter still honing its prototypes, at least the latest Digital Paper will almost certainly come out soon. It's scheduled to go on sale in Japan on June 5th.

Via: The Verge
Source: Sony
In this article: DigitalPaper, eink, gadgetry, gadgets, gear, sony
All products recommended by Engadget are selected by our editorial team, independent of our parent company. Some of our stories include affiliate links. If you buy something through one of these links, we may earn an affiliate commission.