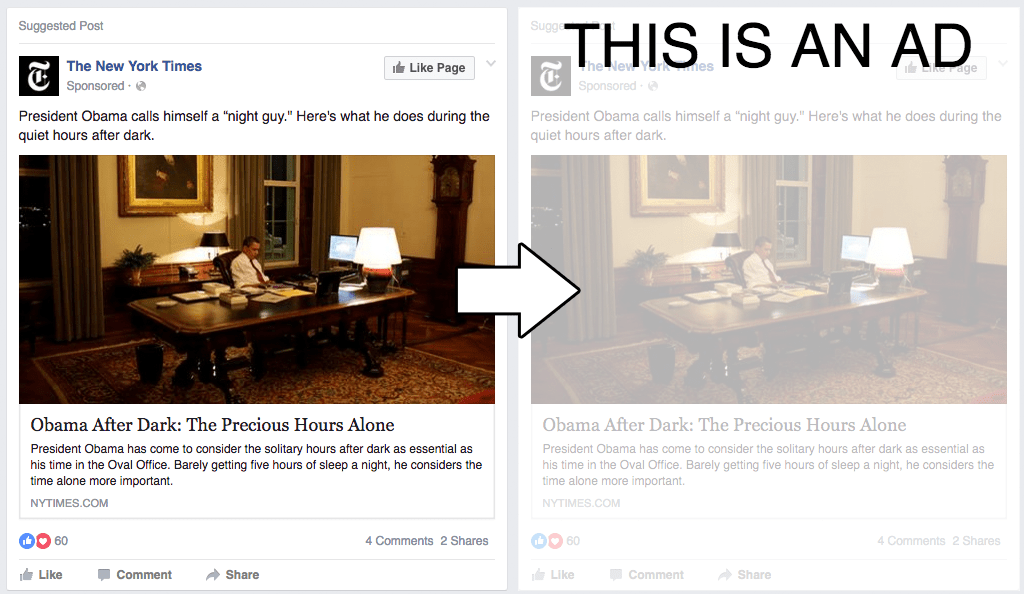 Facebook may have just lost its war on ad blockers. That is, if a new method developed by Princeton and Stanford researchers is implemented into a widely available blocker. Computer scientist Arvind Narayanan and his colleagues detailed unveiled a tool that detects ads the same way humans would, by looking at things like container sizes, icon graphics and words like "Sponsored." It's called Perceptual Ad Blocker, and is already available as a Chrome extension for you to test out yourself. But in an attempt to avoid getting into the ethics around ad-blocking, the system only covers detected ads with words like "This is an ad," instead of removing them altogether.

Existing blockers scour a webpage's source code for signs that they are ads, but those can easily be disguised by anti ad-blocking sites. Narayanan's team designed Perceptual to ignore hidden HTML markup (or tags) and look instead at the actual content (i.e., words and pictures on the page).

Narayanan and Princeton undergraduate Grant Storey already released a Facebook-specific version of its ad-highlighting extension in November, after the social network announced it would make its ads look like regular posts to thwart blockers. That extension already supports several thousand users, said Narayanan. Today's release extends that ability to the rest of the Internet, targeting AdChoice displays.

"We don't claim to have created an undefeatable ad blocker, but we identify an evolving combination of technical and legal factors that will determine the "end game" of the arms race," Narayanan wrote in a blog post. Out of the 50 known anti-ad-blocking sites his team tested, the perceptual ad blocker was able to highlight ads on all of them without being detected.

Because there are laws around ads being labeled clearly so as not to mislead consumers, there will always be some form of identifier around sponsored content that the perceptual ad blocker is supposed to be able to suss out. This means it has a very good chance of continued success, that is, unless companies find a way to serve you ads without you knowing at all.

Via: Motherboard
Source: Future of Ad Blocking (paper)
Coverage: Arvind Narayanan (creator) blog
In this article: adblock, AdBlocking, ads, advertising, facebook, gear, internet, services
All products recommended by Engadget are selected by our editorial team, independent of our parent company. Some of our stories include affiliate links. If you buy something through one of these links, we may earn an affiliate commission.