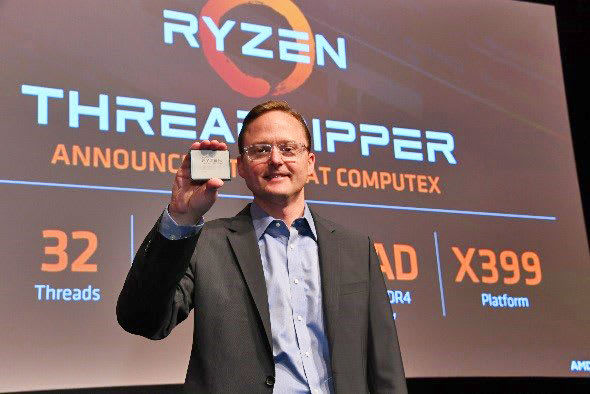 AMD didn't have many details to share about its 16-core Ryzen Threadripper CPU when it was announced back in May, but now it's ready to spill the beans. The chip, officially known as the Threadripper 1950X, will sell for $999, the company announced today. It'll feature a base speed of 3.4GHz with a boost clock of 4GHz. But that's not all: AMD also revealed a $799 12-core Threadripper 1920X CPU, for extreme PC users looking to save a couple hundred bucks. Both chips, along with new motherboards, should be available in August.

While the 16-core Threadripper seemed like the fastest chip on the block when it was first announced, Intel quickly one-upped AMD at Computex with its 18-core i9 Extreme Edition. As usual, though, AMD holds the price advantage. That Intel CPU will run you $1,999, while its 16-core version is a slightly less crazy $1,799. Intel's chips sport base speeds of 3.3Ghz, with boost clocks up to 4.3GHz. If you're looking to get the most multi-threaded computing bang for your buck, AMD still looks like your best option.

Switching from extreme high-end to low-end computing, AMD also offered up a few details about its upcoming Ryzen 3 chips. Both models will be quad-core/quad-threaded processors based on their Zen architecture. The Ryzen 3 1300X will sport speeds between 3.5Ghz and 3.7Ghz, while the Ryzen 3 1200 will clock between 3.1Ghz and 3.4Ghz. The company isn't talking about pricing details yet, but you can expect the new chips to be cheaper than the mid-range Ryzen 5 and high-end Ryzen 7 CPUs.

Source: AMD
In this article: amd, gadgetry, gadgets, gear, personal computing, personalcomputing, Ryzen, Threadripper
All products recommended by Engadget are selected by our editorial team, independent of our parent company. Some of our stories include affiliate links. If you buy something through one of these links, we may earn an affiliate commission.