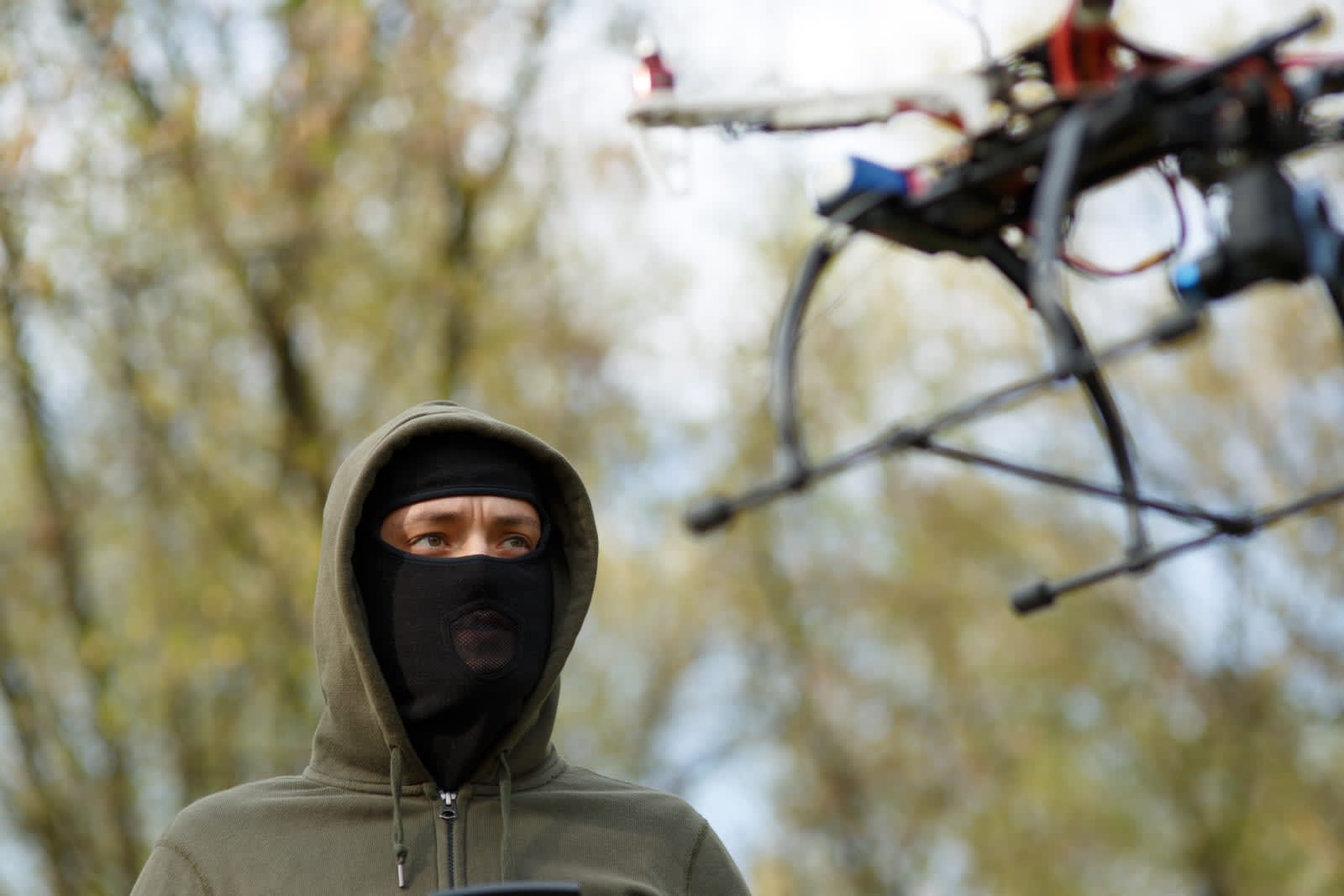 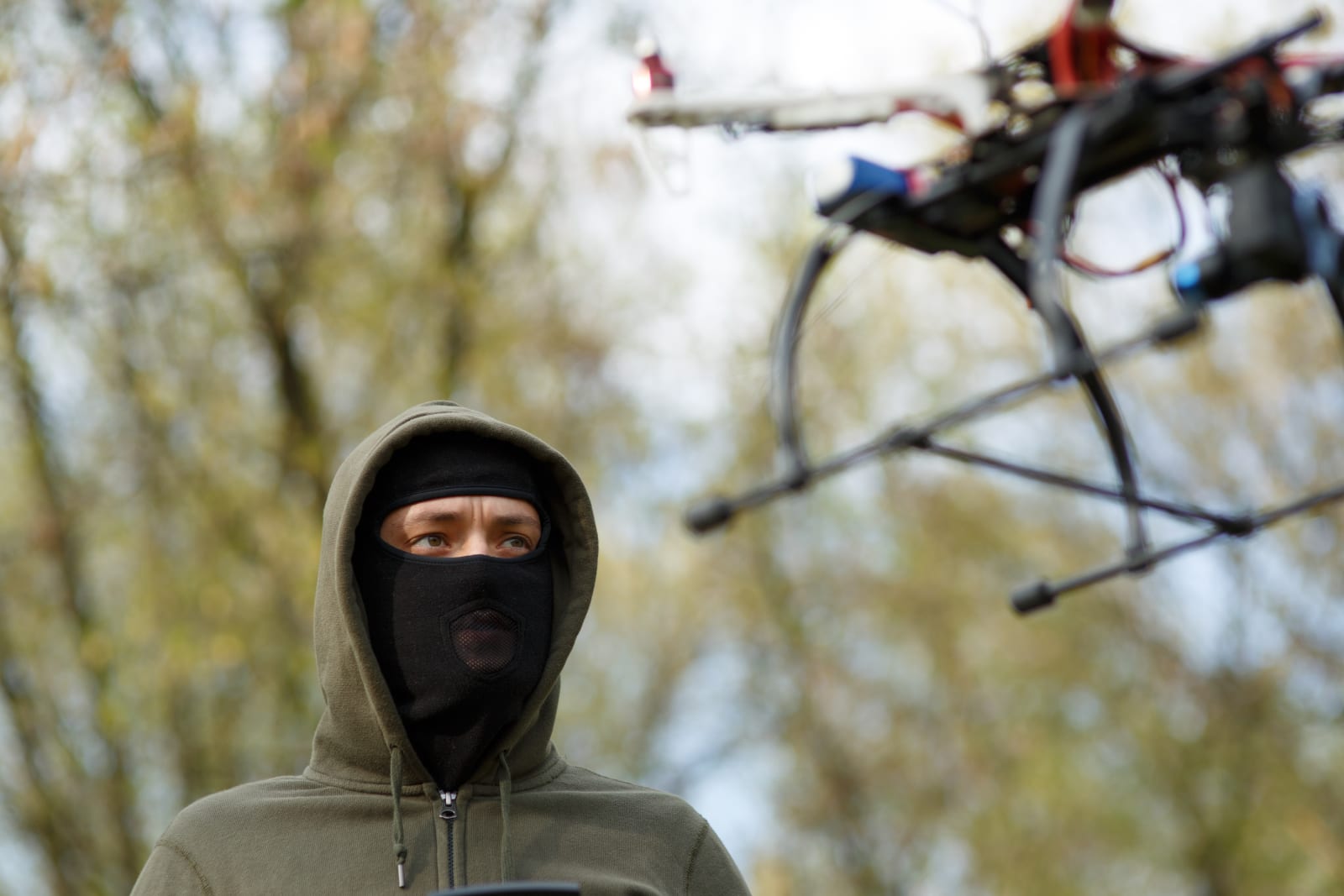 It was supposed to be an easy $1,000 job. All 25-year-old Jorge Edwin Rivera had to do was pilot a drone carrying a lunchbox filled with 13 pounds of methamphetamine, from one side of the US-Mexico border to the other where an accomplice could retrieve the smuggled cargo. What he didn't count on was Border Patrol agents spotting the UAV in flight and tracking it back to his hiding spot, 2,000 yards from the national divide.

This isn't the first time that smugglers have used commercially-available drones to carry contraband. In 2015, the Border Patrol caught two people dropping off 28 pounds of heroin in Calexico, California, and, in the same year, caught another drug ring delivering 30 pounds of cannabis to San Luis, Arizona. Drones -- easy to fly, difficult to spot and far more practical than catapults -- are quickly gaining favor among criminals for everything from smuggling and snooping to actively countering police actions and intimidating the locals. But as criminals become more tech-savvy, so too must law enforcement.

"Use of drones appears to be on the horizon," U.S. District Court Judge Gonzalo Curiel noted while sentencing Brayan Valle in 2016 to three years for heroin smuggling. "The court needs to be clear these cases present considerable danger to our community."

The criminal UAV issue is not limited to America by any means. Police in the UK received 3,456 incident reports of drones behaving badly in 2016, a threefold jump from 2015, a 12-fold increase since 2014 and equivalent to 10 complaints a day. The incidents ranged from minor spats between neighbors to covertly dropping drugs and firearms into prisons. A photographer even managed to set his camera drone down aboard Britain's biggest warship, the HMS Queen Elizabeth, with nary a consequence. As the photographer told the BBC:

I could have been anybody. It was like a ghost ship. I would say my mistake should open their eyes to a glaring gap in security. This was a bit of tomfoolery, but it could have been something terrible, not just for the ship and its crew but for the people of Invergordon...

The situation isn't much better in Australia, either. Earlier this year, Australian law enforcement nabbed seven suspects for their attempt to smuggle 92 kilos (worth $30 million dollars) of cocaine into the country. But the criminal ring wasn't using the drone to mule the drugs ashore from the Port of Melbourne-bound container ship -- they used the drones to counter-surveil the police who were monitoring them. It didn't work out quite as well as they had initially hoped.

"We haven't seen a lot of [using drones to spy on police], it has been used before but this time this syndicate did deploy it quite often and it did cause the surveillance staff to initiate procedures and methods to defeat it," AFP Commander John Beveridge told The Age.

UAVs have also proved quite useful to some of the most ruthless and powerful crime syndicates in South America. Last November, Colombian law enforcement discovered 287 pounds of cocaine as well as a disassembled UAV, possibly belonging to the Clan del Golfo criminal organization, buried on a beach in the coastal town of Bahía Solano.

"The drone was used to carry cocaine to Panama, it had the capacity to transport 10 kilos [22 pounds] on each trip and to travel a distance of 100 kilometers [62 miles]," José Acevedo, the regional police commander, told El Siglo. While the police did not specify what kind of drone was hidden, the fact that it can carry 22 pounds a trip strongly suggests this was a more robust device than the typical commercially available UAV.

Gangs are even using drones -- or at least the threat of being observed by one -- to intimidate local populations against helping law enforcement. A 2016 report by the Brookings Institution found that the Comando Vermelho, a street gang operating in the slums of Rio de Janeiro, successfully foiled a police-outreach program by claiming to "deploy remote-sensor cameras in the Complexo do Alemão slum to identify police collaborators, defined as those who went into a newly-established police station." These claims were never officially verified but were nonetheless sufficient to keep residents away from the stations.

However, law enforcement is far from helpless in countering these incidents. Michael Blades, research director at market-research firm Frost & Sullivan, recently told Air and Space Magazine that the anti-drone business is worth "between $500 million and a billion dollars right now" and could grow to $1.3 billion by 2023. "I think double-digit growth is a foregone conclusion," he said, "just because they're starting from almost zero right now."

Counter-drone systems are as varied as they are numerous, ranging from shotgun shells loaded with wire nets to eagles trained to snatch UAVs from midair. Snake River Shooting, an Idaho-based ammo manufacturer, has even come out with "dronemunition," ferromagnetic birdshot packed into 12-gauge shotgun shells. Many counter-drone technologies, however, are far less dramatic and instead rely on radio-frequency jamming to take out the offending UAV. The DoD's Navy Special Warfare Command in July signed a $1.5 million contract with SkySafe to develop a vehicle-mounted RF jammer that can identify, track and disable enemy UAVs before they can get close enough to do harm to friendly troops.

Unfortunately, RF-based countermeasures won't be coming to commercial retailers for the foreseeable future. Because these devices leverage RF, they can interfere with legal radio transmissions, which runs afoul of Federal Communication Commission rules. That said, products like the DroneGun, made by Australian manufacturer DroneShield, are being tested by the DoD for use by the US military. The DroneGun is an RF jammer shaped like a rifle that weighs 13 pounds. It blocks the drone's 2.4GHz control band at a range of up to 2 kilometers, forcing the drone to either land immediately or automatically return to its launch point (where, presumably, the operator will still be waiting).

The company has also developed the eponymous DroneShield, a passive-detection device that can detect approaching drones from a distance of 150 yards and send text or email-based warnings to authorities. It has already found use in numerous US prisons to prevent the smuggling of contraband and was deployed during the 2015 Boston Marathon, which had been designated a "drone-free zone."

In instances where RF jamming is either unavailable or prohibited, there's always the trusty laser. Boeing, for example, unveiled its Compact Laser Weapons System back in 2015. This portable laser generator runs on a 220V power supply and blasts out a 2Kw beam that can burn through drones in seconds. It's not as powerful as the 30Kw laser the Army has outfitted its HELMTT with, or the 150Kw version the Navy is currently testing aboard the USS Ponce, but is strong enough to knock UAVs out of the sky.

Of course, the US defense industry isn't the only one getting in on the laser-cannon game. Germany's Rheinmetall rolled out its Oerlikon Skyshield High Energy Laser at Eurosatory 2016. The 10Kw laser is part of a larger area-of-denial system that targets incoming threats with one of three weapons: missiles to take out attacking aircraft, 35mm rounds for helicopters and the laser for drones.

Security researchers have even gone so far as to develop anti-drone viruses. In 2015, Rahul Sasi announced that he had developed the first such malware, dubbed Maldrone, ahead of that year's Nullcon expo. The Python-based script is uploaded to the drone through the local WiFi network and, upon infection, overrides the drone's drivers and sensors. This effectively gives the attacker remote control over the UAV while locking out the drone's owner. Sasi's virus initially only worked against Parrot AR drones, which are Linux-based, though the technique can theoretically be applied to other brands of UAV.

This is similar to the SkyJack system developed by security researcher Samy Kamkar back in 2013. Kamkar also used a Parrot AR drone, this one equipped with a Raspberry Pi loaded with his SkyJack virus. The UAV seeks out nearby drones, forcefully disconnects their WiFi connection and then reauthenticates the attacker (making the drone think it's reconnected to its rightful owner). Once the drone is under the attacker's control, it can be used to further spread the virus.

This past April, the UK police and prison system agreed to a £3 million task force to curb contraband smuggling by UAVs, for example, while police departments roll out "drone forensics" teams to track down absconding operators. "Drone forensics are becoming increasingly important as more drones take to the air," James Mackler, an attorney at Mackler Law Firm in Nashville, Tennessee told the BBC. "Civilian commercial drones are now being used by terrorist organizations, and the fact that they are being weaponized makes forensics all the more critical."

We are likely seeing the start of a new kind of arms race -- one that pits limited law-enforcement resources against a growing armada of increasingly inexpensive UAVs. Counter-drone measures are still exceedingly expensive compared to the devices they're designed to detain and are often constrained by outdated regulations and rules. Don't expect that to last for much longer, however, as governments continue to incorporate the new measures into their existing enforcement apparatuses.

In this article: Aircraft hijacking, Bahía Solano, Boeing, Border Patrol, Boston Marathon, Federal Communications Commission, gear, HMS Queen Elizabeth, Mexico United States border, Nashville, Tennessee, Panama, Parrot AR.Drone, Raspberry Pi, robots, security, Skyshield, The Age, tomorrow, Wi-Fi
All products recommended by Engadget are selected by our editorial team, independent of our parent company. Some of our stories include affiliate links. If you buy something through one of these links, we may earn an affiliate commission.