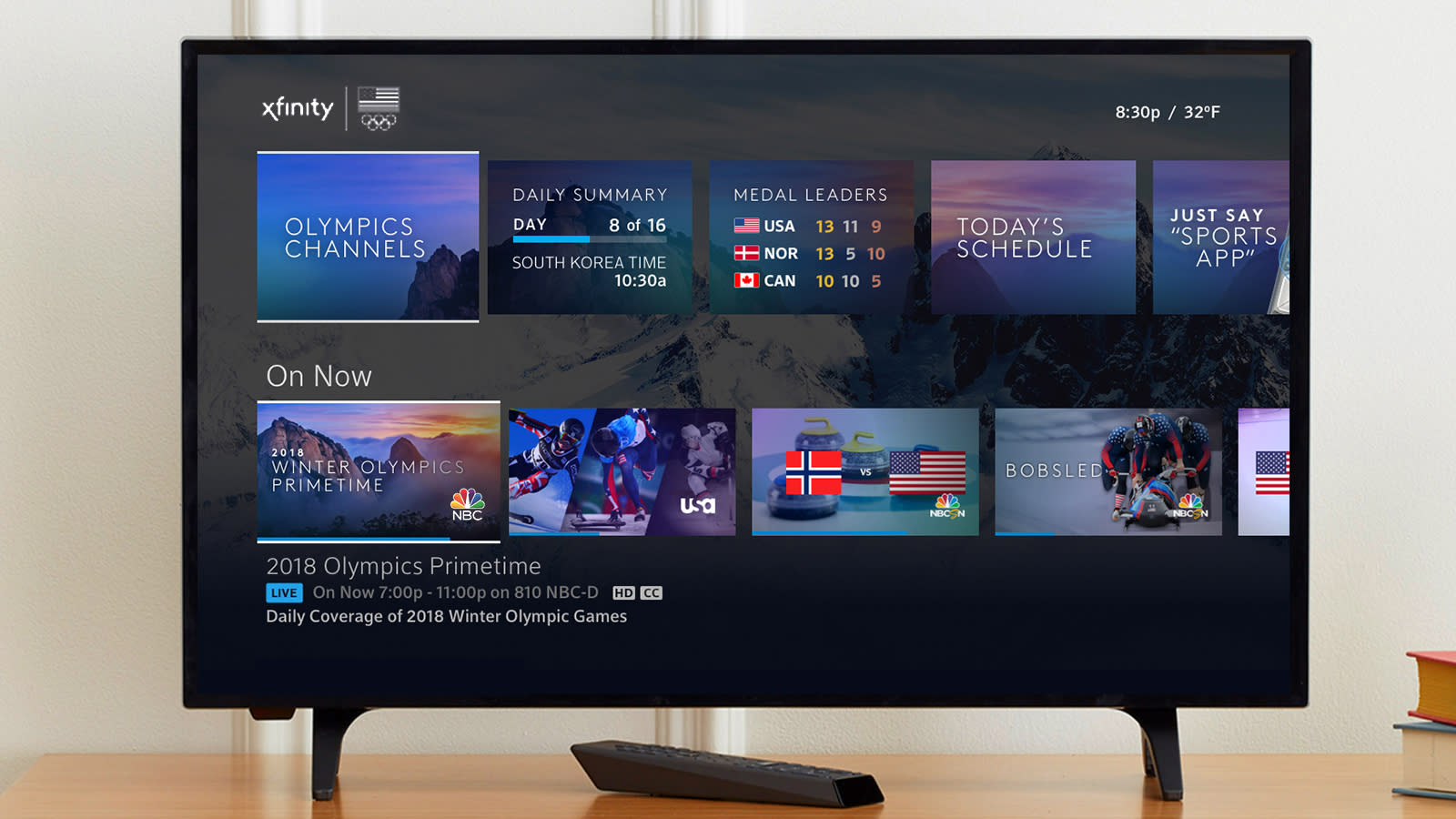 The Olympics offer a unique technical challenge for TV broadcasters and cable companies every few years. With the 2018 Winter Olympics just a few weeks away, Comcast has announced its plans to offer a pretty huge variety of coverage for its Xfinity TV subscribers. While other cable providers get access to the same content from NBC that Comcast does, the company is enabling some solid features and packaging it in ways that are exclusive to Xfinity subscribers.

For starters, it's worth noting that the Winter Olympics take place in Pyeongchang, South Korea; thanks to the time difference, many events will take place in prime time here in the US. NBC will broadcast its nightly Olympics prime-time coverage live, with no tape delay, so it should be a lot easier than in years past to see your favorite sports live. Xfinity's Olympics Home will show viewers everything that's airing live across various networks (including NBC proper, NBC Sports, USA and several others). From there, you'll also be able to quickly browse highlights, check out a daily summary, the current medal count and the day's schedule and jump into whatever particular video you want to view.

For live content, Xfinity is offering "instant on demand," which basically means you can tune in to any live broadcast and then tell it to start from the beginning. So if you're jumping into the day's coverage late, you can still start right from the beginning without having to save it to your DVR.

Another big part of Xfinity's Winter Olympics coverage is something they're calling "virtual channels." These aren't dissimilar to YouTube playlists focused around specific themes — they'll primarily be made up of shorter clips (around five minutes each, though that can vary). Naturally, there will be channels for individual sports, but there will also be themes like " biggest upsets," "fantastic finishes," "funniest moments" as well as daily recaps, the best moments from the previous night, profiles of teams and athletes and so forth. For people who don't want to sit down and just get a quick taste of the most popular trending stories or focus on specific sports, these channels should be helpful. Xfinity's editorial team will be curating these selections, and they will be exclusive to the company's subscribers. Xfinity customers get a handful of other niceties, as well. The voice-capable X1 remote will let you ask for a variety of content, like medal counts, sports and athletes. The company's X1 Sports companion app lets you pull up a sidebar of Olympics content on the TV to keep track of scores and standings for other events, and if you see something you want to watch in that sidebar, you can just scroll over and click it to launch. Finally, the Xfinity Stream app for iOS and Android will basically mirror the Olympics experience users get on their TV, so you'll get the same experience for keeping up on the games away from the big screen in your house.

And if your big screen is a 4K TV, NBC and Xfinity will have super high-definition content to check out. Unfortunately, it isn't live broadcasts, but a whole bunch of the bigger stuff events will be available on-demand the following day in 4K HDR with Dolby Atmos sound. The opening ceremony, closing ceremony, figure skating, ski jumping, snowboard "big air" and men's hockey are all getting this treatment, among a few other events. It's not the entire slate of coverage, but this will likely be the biggest sporting event to catch in 4K thus far. Maybe by the Summer 2020 games, we'll actually get some live 4K broadcasts.

As for who will get access to these features, Comcast says that almost anyone with a cable subscription beyond the bare-bones basic tier will get this coverage and features included with their subscription. Given how many people were unhappy with not being able to keep up with events live during the 2012 Winter Olympics in Sochi, Russia, Comcast's plan sounds a lot better — getting tons of coverage live is probably the most important thing here, and having easy ways to catch up on events that viewers miss should make the Olympics a lot more enjoyable for Xfinity customers.

In this article: 2018winterolympics, av, comcast, entertainment, nbc, nbcsports, olympics, winterolympics, xfinity
All products recommended by Engadget are selected by our editorial team, independent of our parent company. Some of our stories include affiliate links. If you buy something through one of these links, we may earn an affiliate commission.