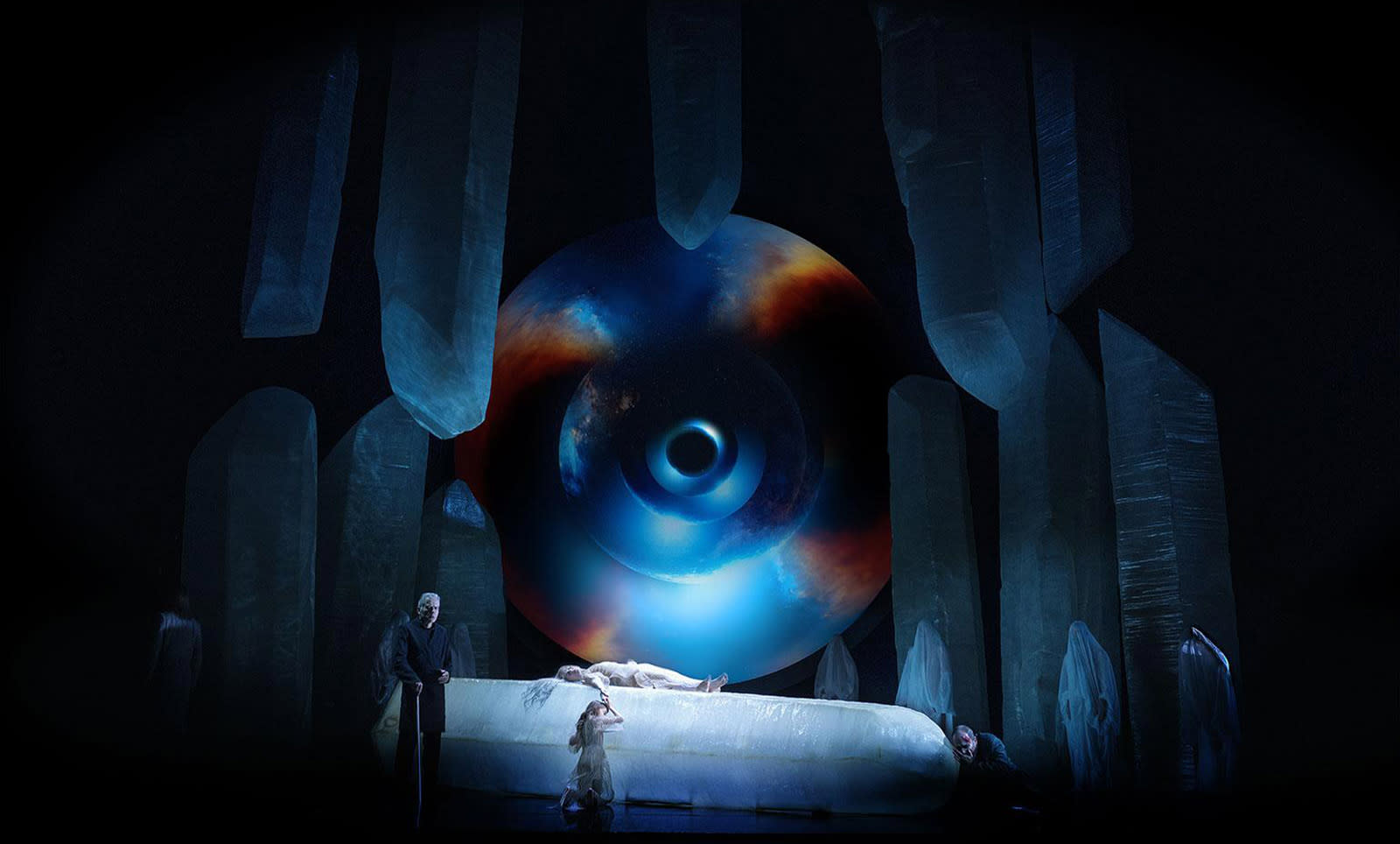 Grandiose space images from NASA's Hubble telescope might be the last thing you'd expect see in an early 20th century French opera. However, Marco Brambilla, the artist behind epic video art installations and Kanye West's "moving painting" music video for Power, has done just that. He created the video backdrop for a new production of Claude Debussy's Pelléas et Mélisande, currently running at the Opera Ballet Vlaanderen in Antwerp, Belgium.

Pelléas et Mélisande, based on the "libretto" play by Maurice Maeterlinck, is Debussy's only opera and regarded as one of the greatest ever. The story depicts Prince Golaud, who discovers the mysterious Melisandé lost in forest, setting up a love triangle with Golaud's half-brother. The set design by Marina Abramović features a giant, crystal-covered convex mirror that merges into the floor and act like an eye with Brambilla's video backdrop as the "iris" at the center.

Brambilla used collages of Hubble and NASA images to create the backdrop. "Both the libretto and the music have always screamed of the cosmos to me," Brambilla said. "Since the text deals with the recurring theme of the eyes and sight, Marina Abramovic's set design uses seven monolithic crystals and an onstage projection disc as the pupil of a symbolic eye. This becomes a portal into the subconscious where my videos unfold and heighten the tension and drama unfolding onstage."

The play, with its themes on the creation and destruction of relationships, is perfectly suited to other aspects of Hubble, too. Many of the telescope's most famous images, like Pillars of Creation and the Carina Nebula, depict the births and deaths of stars and galaxies.

Pelléas et Mélisande was already ahead of its time when it debuted in 1902, so naturally it was misunderstood by critics and cast alike. It has seen avant-garde interpretations before, perhaps most famously by French artist Jean Cocteau in the 1960s. By incorporating and reinterpreting modern space imagery, however, the latest version may be the most visually spectacular version yet.

In this article: art, Debussy, entertainment, Hubble, Opera, PelleasEtMelisande, TheBigPicture, thenewbigpicture, video
All products recommended by Engadget are selected by our editorial team, independent of our parent company. Some of our stories include affiliate links. If you buy something through one of these links, we may earn an affiliate commission.