It sounds great on paper, but the reality is far from perfect.

My backpack is a disaster. I've always been sort of a pack rat, and working at Engadget doesn't help. Every day I lug a laptop, a tablet, a few phones (for review purposes), an SLR, a huge power bank, chargers and cables for all of those things, and a book to the office. With MWC coming up, this seemed like a great time to reevaluate what I drag with me everywhere. And at the top of my list for reevaluation is my 15-inch MacBook Pro -- one of the heaviest things in my bag.

Enter Samsung's (awkwardly named) Notebook 9 Pen. For $1,399 you get one of the lightest Windows 10 ultraportables out there, and as the name suggests, it's one of just a few Samsung laptops that use the company's famous S Pen. After a week of testing, it's clear that the Notebook 9 Pen has its uses, but most people won't miss out by skipping it. 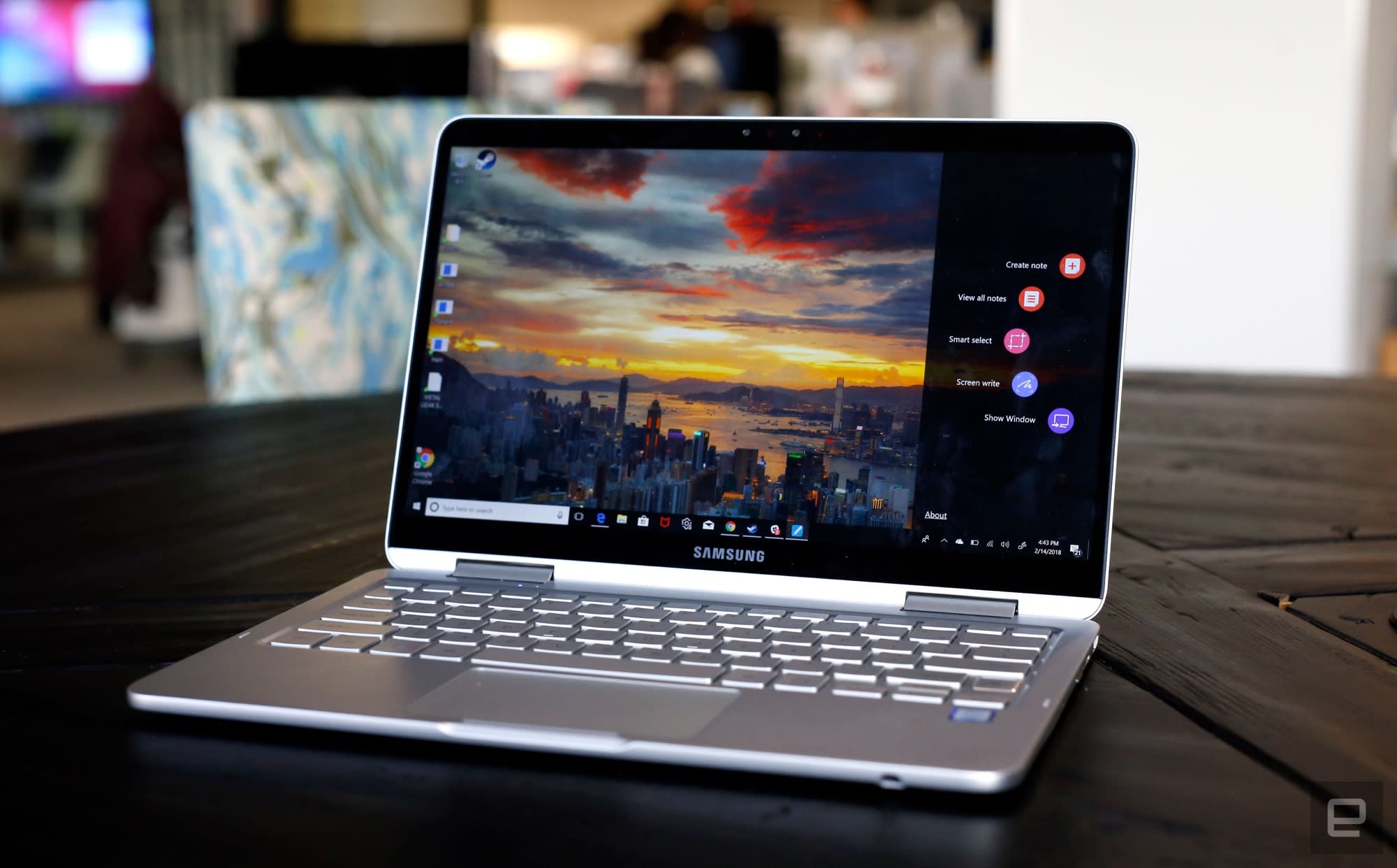 For me, the Notebook 9 Pen's biggest draw is its weight -- 2.2 lbs -- and that's largely a result of Samsung's clever metallurgical skills. It's easy to pick up the machine and assume it's made of plastic, but it's not. Samsung developed a magnesium-aluminum alloy called Metal 12 to make its new devices more durable and lighter. Samsung's choice worked: The N9 Pen handled a few cautious drops surprisingly well. The alloy has a bit more flex than expected, but it's nothing to get worked up over.

I'm less fine with the way the Notebook 9 Pen looks. I dig minimalist designs, I really do: Google's Chromebook Pixel is one of my favorite designs ever, and it was basically a flat, unadorned rectangle. Samsung's design is downright boring. It's just straight silver-gray, with only a shiny Samsung logo on the back to break up the monotony. This might be the single most unremarkable looking laptop I've ever seen.

And the port selection is even worse. There's one full-size USB 3.0 port, an HDMI-out, a USB-C port and a tiny slot for a microSD card. This limited selection means the Notebook 9 Pen isn't ideal for my usual workload. Honestly, it feels like Samsung simply went with the bare minimum. I got by, but there was nothing about the experience to relish. And while it's not exactly a new choice, I still hate that Samsung stuck the notebook's power button on the right side, just below the microSD slot. It takes almost no pressure to trigger. More than once, I've grabbed the N9 Pen off my desk only to accidentally put it to sleep because my finger grazed the power button.

The Notebook 9 Pen isn't all bad though. The built-in fingerprint sensor works well, and I quite like its placement directly beneath the Enter key. Samsung also gets credit for building one of the most pleasant keyboards I've used in a while. Bear in mind that I'm coming from the flat, mostly unsatisfying 2016 MacBook Pro keyboard, so most things feel like an improvement. Even so, the key travel and spacing feel great. And Samsung avoided a confusing nonstandard key layout. Even the Precision trackpad was mostly a pleasure. My only real qualm is that the keyboard's space bar isn't centered, so my hand occasionally caused some misclicks by grazing the trackpad.

The screen is quite good, too, with vibrant colors and surprising crispness for a 13-inch, 1080p panel. It was also more than bright enough for working outdoors (on the few days this week the sun popped out, anyway). The amount of bezel along the top and bottom of the screen is slightly off-putting, but it's a concession I'm all right with given the asking price. There are better screens in this price range, but Samsung's isn't far behind. 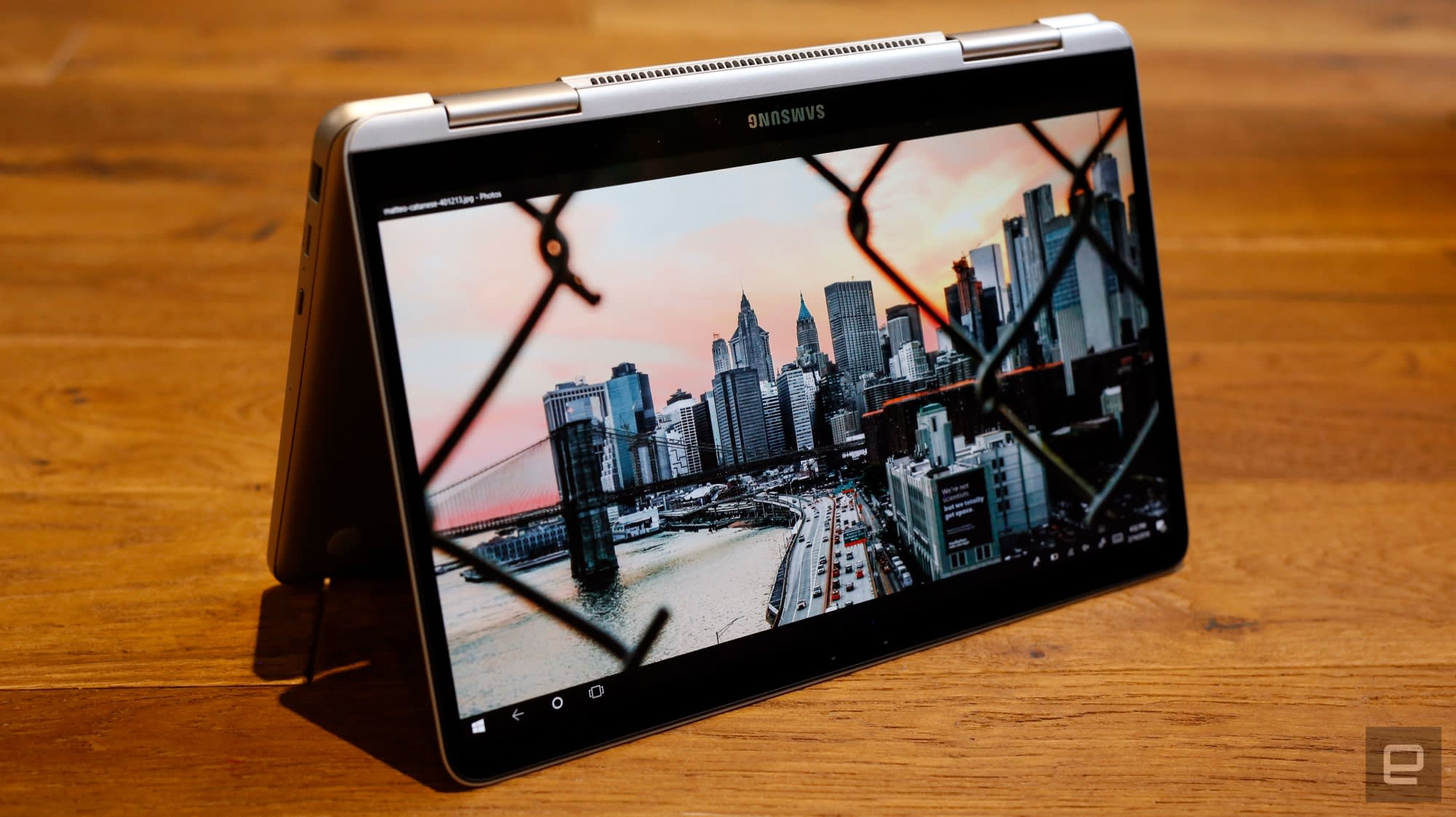 Our Notebook 9 Pen review unit is the entry-level model, which leans on an eighth-generation Intel Core i7-8550U processor, 8GB of RAM and a 256GB SSD. While the machine's port selection left me scrambling for dongles and USB hubs, the Notebook 9 Pen handled my daily workflow without hiccups or drama. Dozens of Chrome tabs, lots of Photoshop work, prolonged Spotify sessions and even a bit of light gaming -- the Notebook 9 Pen handled everything I threw at it with poise.

Just don't expect to game hard on this thing: Building large, unruly structures in Minecraft was no problem, but the machine's lack of dedicated graphics means you'll have to save your Overwatch matches for a different device. Battery life was unremarkable though. On a full charge, I could squeeze 10 hours of work from the Notebook 9 Pen if I managed things well -- otherwise, that figure tended to hover between five and six hours on days when I really need to get some work done.

In addition to all the niceties that come with Windows 10, Samsung's own add-on software was remarkably helpful. Recorder Plus serves as a one-stop shop for all of your voice recordings, and the ability to add time-coded "bookmark memos" made notating interviews a breeze. (As someone who has to transcribe such calls pretty frequently, thank you, Samsung.) Samsung Messages, meanwhile, is essentially a Windows-friendly take on iMessage for Galaxy phone owners. Ultimately, the most useful addition to the mix was the Samsung Settings app, which offered easy access to a number of options that would normally be a touch more difficult to find. You can, for instance, quickly change the punchiness of your display colors, enable HDR for videos, fire up battery-saver mode and even toggle a face-smoothing Beauty Mode for the laptop's front-facing camera. 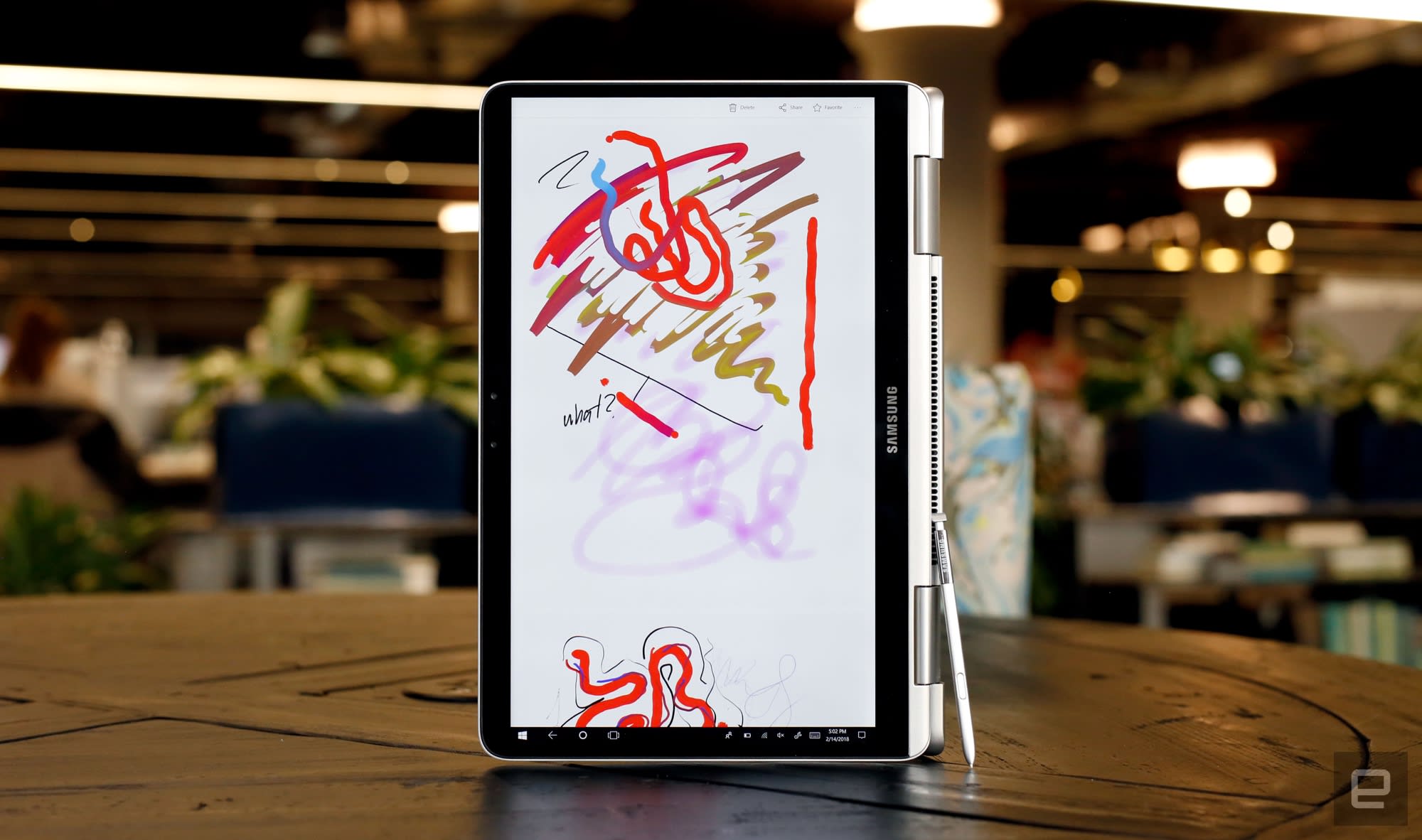 The name says it all. The Notebook 9 Pen is sort of pointless unless you plan to use the built-in S Pen. Unfortunately, that's sometimes easier said than done. If the Notebook 9 Pen is sitting on top of a desk -- which isn't an unreasonable possibility -- it's basically impossible to remove the S Pen without lifting the machine up. More absurd than the problem is how easy the fix is: All the pen needs is a notch near its clicky end to make it easier to grab. This isn't rocket science, guys. 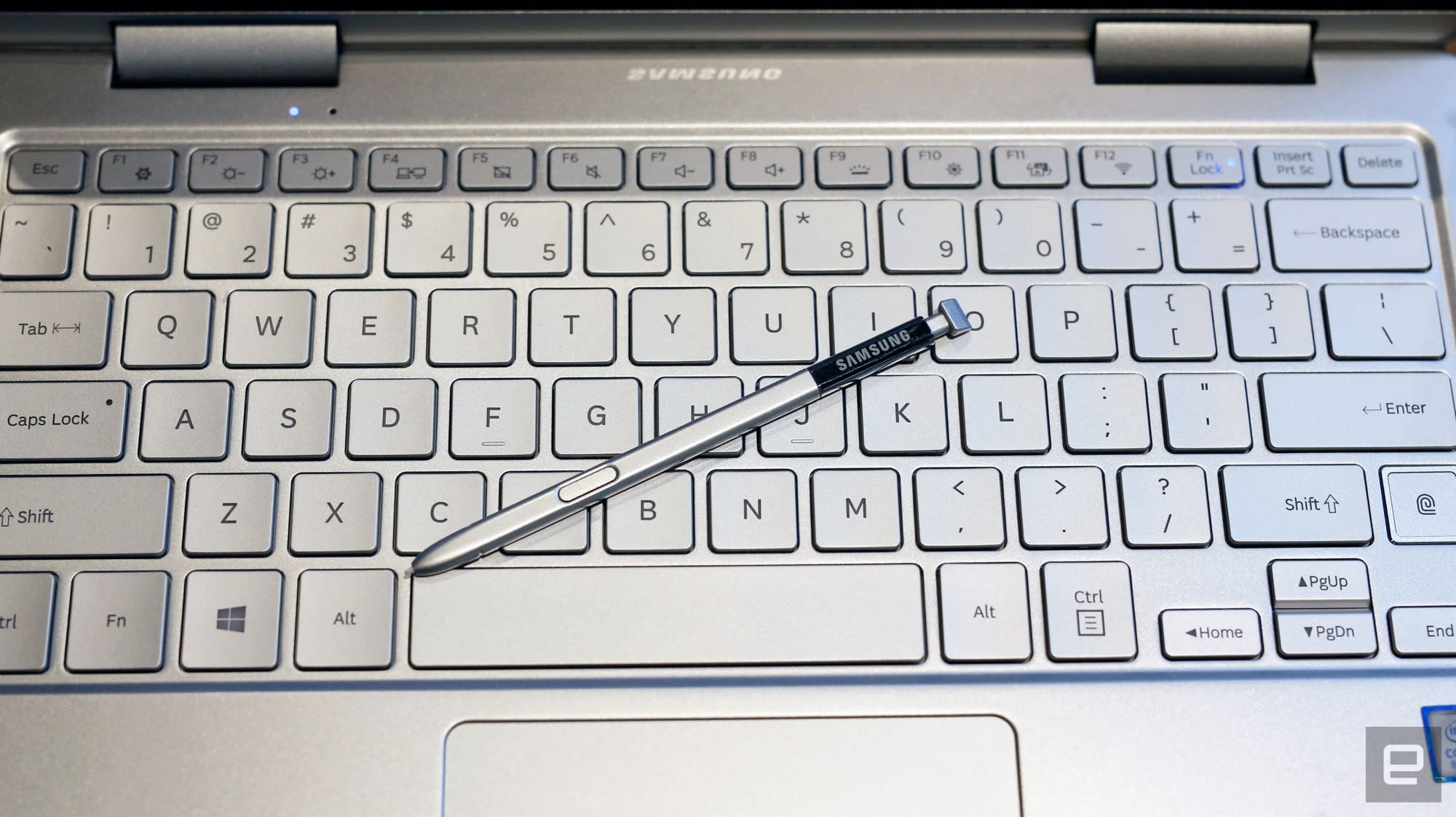 Once I managed to free the pen, things started looking up pretty quickly. If you've used a Galaxy Note within the past few years, Samsung's Air Command interface will look pretty familiar: Once you remove the pen, a panel slides onto the screen to offer shortcuts for note-taking, doodling on top of screenshots and extending your desktop across other displays you want to hook up. You're also able to use the S Pen to capture areas of the screen and turn them into GIFs. It's easily the most fun addition to the mix, and I'll admit to using it much, much more than I expected. And as always, if you need to access the Air Command control panel, a quick click on the S Pen's button does the trick. However, the Pen has to be within millimeters of the screen.

While the S Pen seems to lack the precision of something like Microsoft's active Surface Pen, it's perfectly suited for jotting down notes and quick sketches, be they in OneNote or Samsung's own Notes app. It was also surprisingly solid for editing photos and whipping up images in Photoshop. More importantly, the pen itself is passive and never requires a charge. I'm liable to ditch accessories entirely once they become even a little inconvenient, but the S Pen is always there and ready to be used. That goes a long way in my book. 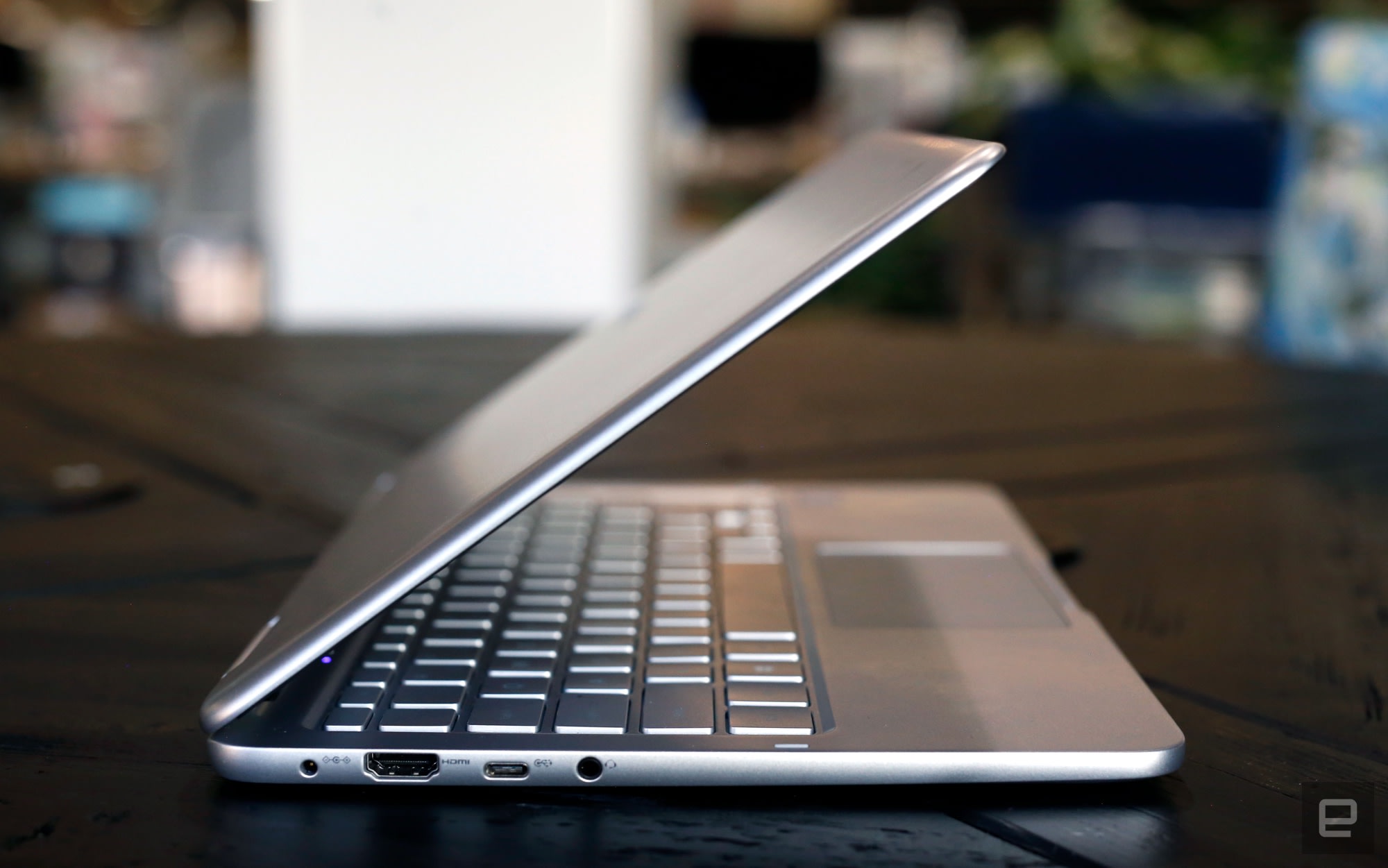 Ultimately, Samsung's Notebook 9 Pen is a solid little machine with perhaps too many quirks. I have few complaints about its performance and battery life, and in general it has been a reliable little workhorse. It does, however, feature a handful of puzzling design decisions that could've been avoided had Samsung approached this machine more thoughtfully. And the S Pen, while surprisingly effective on a laptop, just won't be worth the premium for a lot of people. Samsung's penless 13-inch Notebook 9m -- also recently announced -- offers nearly everything this pen-packing model does for $100 less. Still, the Notebook 9 Pen has its niches: Students in need of an excellent note-taking machine will find a lot to appreciate here, as will folks who crave sheer portability. If that's not you, well, you can do better elsewhere.

All products recommended by Engadget are selected by our editorial team, independent of our parent company. Some of our stories include affiliate links. If you buy something through one of these links, we may earn an affiliate commission. All prices are correct at the time of publishing.
View All Comments
Samsung Notebook 9 Pen review: Solid stylus, so many compromises