A special magnesium alloy helps keep this 2-in-1's weight down.

Samsung announced a handful of laptops before CES even started, but only one of the was really new: the Notebook 9 Pen. It isn't Samsung's first attempt at blending a laptop and a Galaxy Note, but after a little hands-on time, we can say it's shaping up to be one of the most polished.

As you might expect from Samsung, the Notebook 9 Pen is pretty understated in terms of design. Some may prefer the adjective "boring," and I can't really argue with that: It's a nondescript silver machine with rounded edges and very little in the way of personality. As far as Samsung was concerned, though, building an incredibly light machine was more important than impactful design. Thanks to the use of a magnesium alloy called Metal-12, the Notebook 9 Pen weighs in at a paltry 2.2 pounds. That's a little more than half of what the MacBook Pro I'm lugging around Las Vegas weighs.

Of course, the device's name really says it all: There's no point in picking up a Notebook 9 Pen unless you want to live that S Pen life. This isn't the first Samsung device to use that trademark stylus, but it's nonetheless a handy thing to have around. Samsung is positioning the Notebook 9 Pen as a tool for artists, and the S Pen -- with its 4,096 pressure levels and 0.7mm nib -- is indeed quite good for sketching, especially when you have the screen folded back into tablet mode.

After using the thing for a while, the Notebook 9 Pen seems like a better tool for students: You'll be able to jot down lecture notes in either OneNote or Samsung's included Notes app, and invoking Air Command (as you would on a Galaxy Note) reveals shortcuts for marking up whatever you happen to be looking at. A new Voice Note feature uses a far-field microphone to capture conversations and lectures as they unfold around you, and you have to option to jot down written notes as the app records audio. And what better way to while away those precious moments between classes than using the S Pen to make GIFs by capturing snippets of video on-screen. (Pro tip: If you happen to lose the laptop's included S Pen, the one bundled with the Galaxy Note works just fine.) Take it from me, someone who didn't expect to fall this hard for the Galaxy Note 8: Being able to pull off some of the same tricks on an ultraportable notebook is highly gratifying. 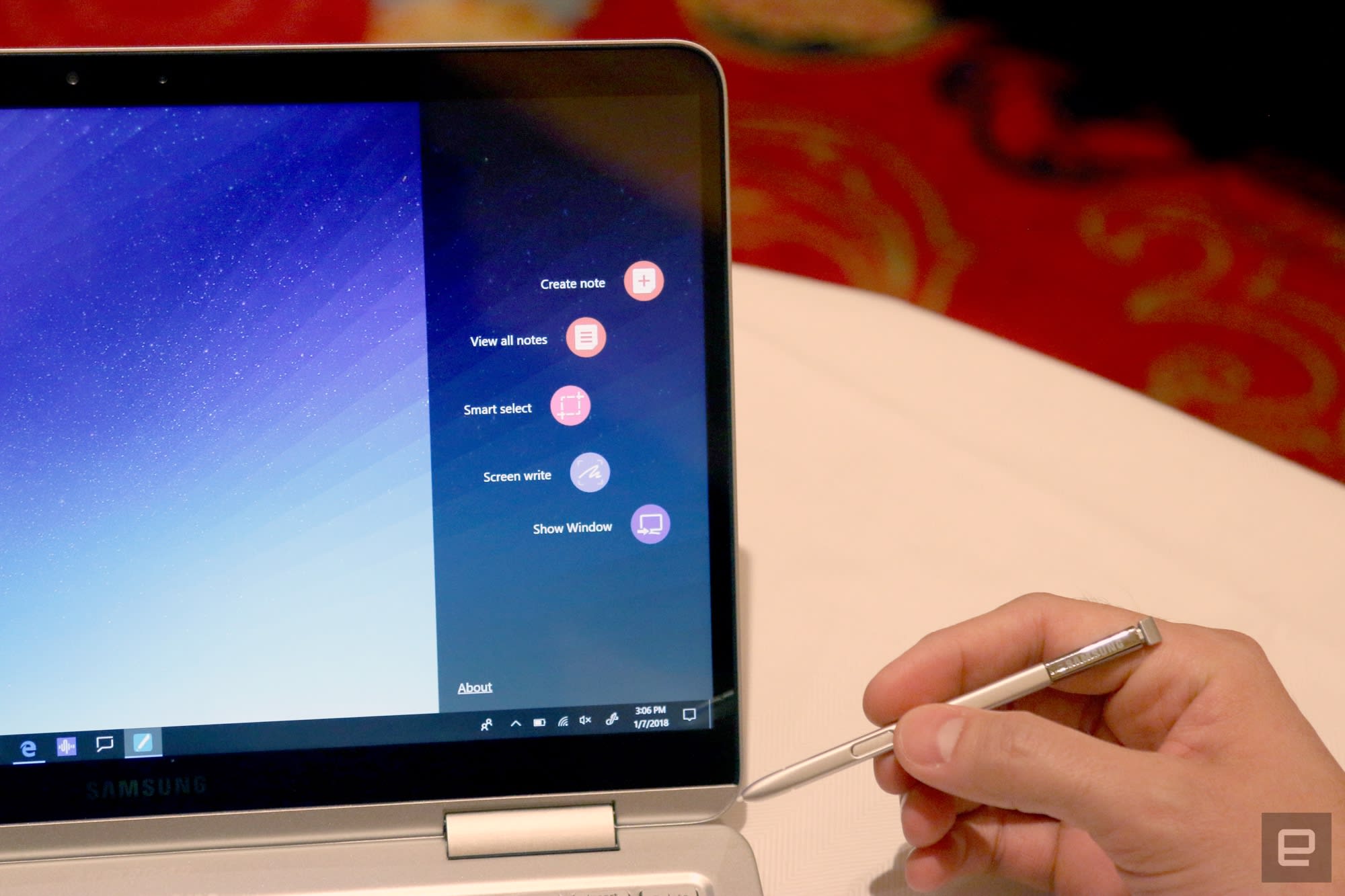 Other than the the S Pen, the Notebook 9 Pen is a pretty standard machine. There's an eighth-generation Intel Core i7 chipset under the hood, and you'll be able to pick up models with up to 16GB of DDR4 RAM and a 512GB SSD, though Samsung is still keeping quiet on pricing. In the time I spent with the Notebook 9 Pen, the performance felt snappy, but since this is still non-final hardware, you'll have to wait for a complete verdict. Similarly, I had no real issues with the 13.3-inch, 1080p display -- my only real concern is that at max brightness, it's not quite as bright as either of the other Notebook 9 models Samsung talked up ahead of the show. I also would've preferred a more robust selection of ports -- there's one USB-C port, one USB 3.0 socket, a microSD slot and an HDMI-out -- but here's hoping the final price reflects this.

The Notebook 9 Pen might be lacking in style, but so far it seems like a solid blend of power and pen-based productivity tools. Whether it fulfills a need that actually exists is another story, and it shouldn't be too long before we can take home the final hardware and find out for ourselves.