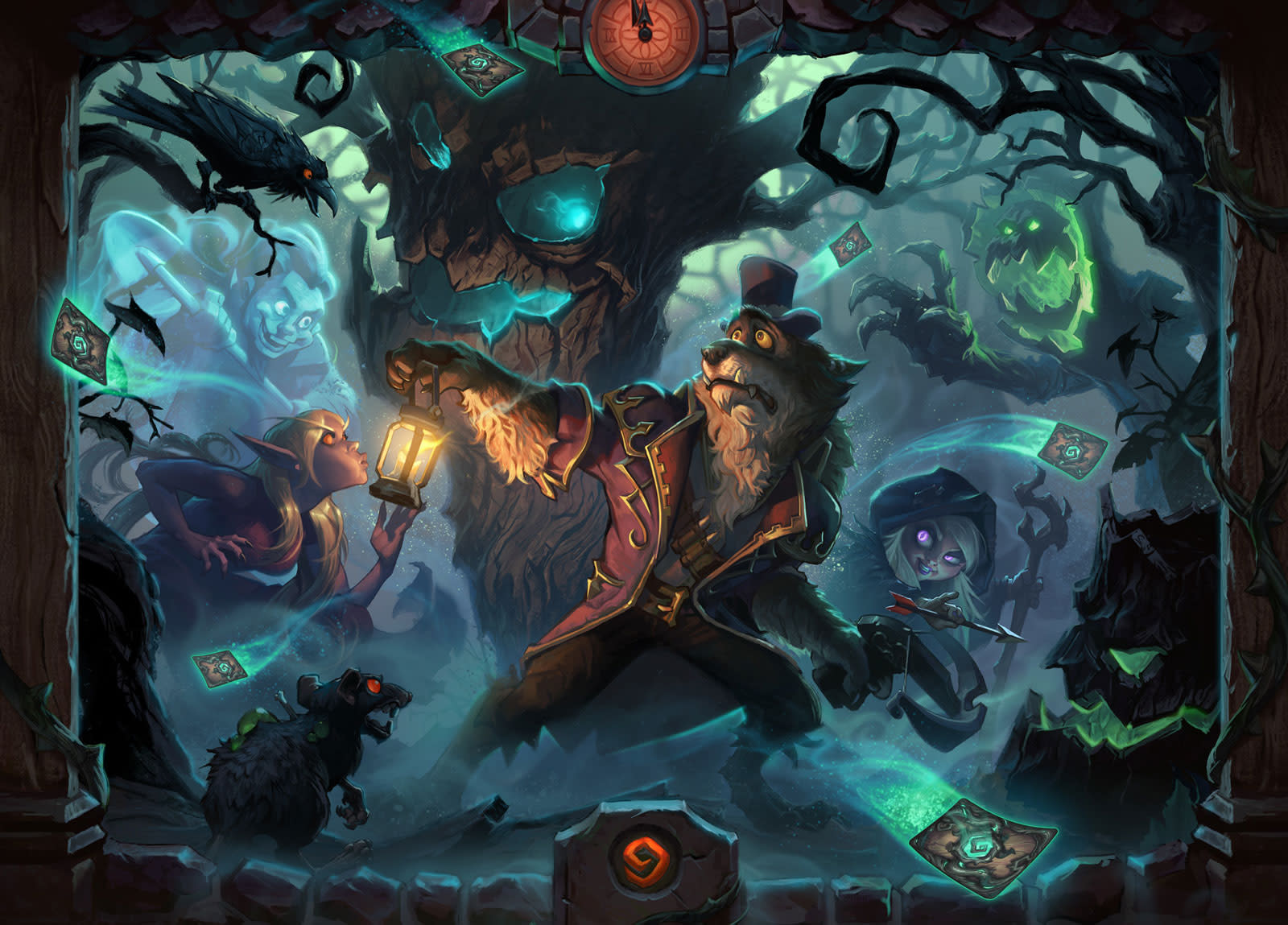 Weeks after laying out this year's plan for Hearthstone, Blizzard has announced the first expansion of 2018: The Witchwood. Once it lands, the Year of the Raven will begin -- and all of 2016's cards will be retired from the main Standard format. The haunted forest-themed set will introduce 135 cards and several card types that introduce new styles of play. And like the last two content additions, players will get solo content for free. The announcement didn't give a release date, but if the last two years are any indication, The Witchwood will likely drop next month.

As in every expansion, the set's big additions are the new card types. The first, Echo, allows you to play as many copies of a card as you have the mana for. In their example, the Hearthstone team presented a 3-mana minion with the ability, which would make it useful later in the game, allowing you to drop an extra one on turn six or two on turn nine. The second new card type, Rush, allows minions to attack on the same turn like the existing ability Charge, but only other minions. Finally, there are some Worgen (read: werewolf) cards that shift while they're in your hand.

In the Hearthstone team's adorable lost-in-the-woods promo video, they also showed off a couple of the new legendary-rarity cards that promote innovative deck archetypes. One reduces your hero power to cost one mana if you've only included even-numbered cost cards in your deck, while another upgrades your heroic ability if you've only got odd-priced ones. In other words, these will enable new gimmicky decks that may or may not pan out, but people similarly underestimated cards like Razakus that ended up dominating the meta for awhile.

As the Hearthstone team promised while outlining the 2018 schedule, The Witchwood will come with its own single-player content: Monster Hunt. This first debuted with last year's second set, Knights of the Frozen Throne, but the most recent expansion Kobolds and Catacombs kicked solo adventuring into high gear with the Dungeon Run. Much like that adventure, Monster Hunt will have players defeating bosses and drafting decks as they go, though they'll have to wait two weeks after the set launches before this mode goes live. If you're really keen to learn the cards, the Hearthstone team will host a livestream on its Twitch channel at 11am PT on March 26th where it will start revealing them.

In this article: av, blizzard, BlizzardEntertainment, CardGames, ccg, expansion, gaming, hearthstone
All products recommended by Engadget are selected by our editorial team, independent of our parent company. Some of our stories include affiliate links. If you buy something through one of these links, we may earn an affiliate commission.