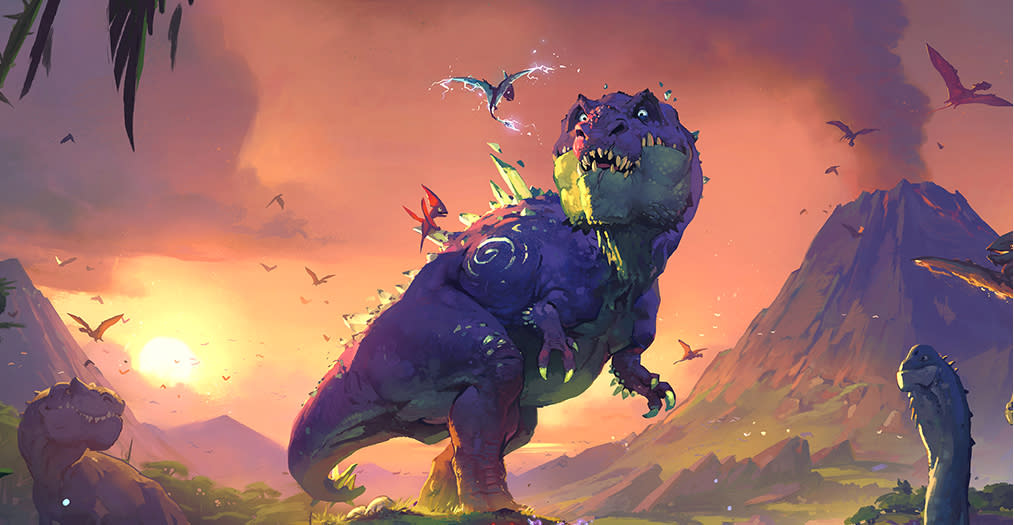 The long-awaited first expansion of 2017 for Blizzard's Hearthstone is finally here. Journey To Un'Goro adds 135 cards (gallery here) to the game with fun new functions, but the first content of the year will also retire all of 2015's cards out of the main Standard format. That means saying goodbye to some old frenemies (adios, Ragnaros) and hello to a refreshed meta, a Wild West of untested deck concepts and synergies. A digital cardscape where dinosaurs rule.

First thing's first. The new set is a promising collection with two major additions: The "Adapt" mechanic, which allows players to choose between three options to buff a creature, and the new "Elementals" group, which has tribe synergy akin to pirates and murlocs. (Some old creature cards have been retroactively rebranded and included in the new gang.) The expansion also introduces a new type of card, called "Quests," which give players a powerful reward for fulfilling requirements ("play X number of Y cards/creatures," etc).

The first expansion of the year ends Hearthstone's Year of the Kraken and begins its Year of the Mammoth. This is the game's way of designating when certain sets rotate out of Standard format, which is restricted to only the latest cards. This isn't just great news for players eager to see some powerful decks lose their key dominant cards -- it's also dropping all cards from 2015 and replacing them with just the new cards from Un'Goro (along with a few too-popular cards from the original Classic expansion). This majorly shakes up the game balance, ushering in a refreshing period of uncertainty where players have more breathing room to try out new deck lineups and card combinations.

But Year of the Mammoth isn't just cycling out old cards for new ones: As Blizzard announced in February, Hearthstone will be ditching its prior schedule alternating between 135-card expansions and small-release Adventures in favor of releasing three full-size content blocks in 2017. That's a lot more cards, meaning a lot more gameplay possibilities. But it'll also be the most expensive year for collectors yet, so completionists beware: It'll cost you about $670 to get 90 percent of this year's content if you're paying up front.

That said, who knows how generous the studio plans to be for players who can't spend big bucks to enjoy all this year's fun new toys (like the brand-new Quests, which are all legendary-rarity, costing 1600 in-game dust apiece. Ahem). Blizzard also promised free Adventure-style PvE content to come, starting with the as-yet unnamed next expansion. And as indicated by the most recent patch notes and the latest designer insights video, the game's team will be increasing support for the local get-togethers, known as Fireside Gatherings, including an upcoming closed beta testing out the mysterious custom Taverns. For now, enjoy your dinosaurs.

In this article: av, blizzard, CardGames, dlc, expansion, gaming, hearthstone
All products recommended by Engadget are selected by our editorial team, independent of our parent company. Some of our stories include affiliate links. If you buy something through one of these links, we may earn an affiliate commission.