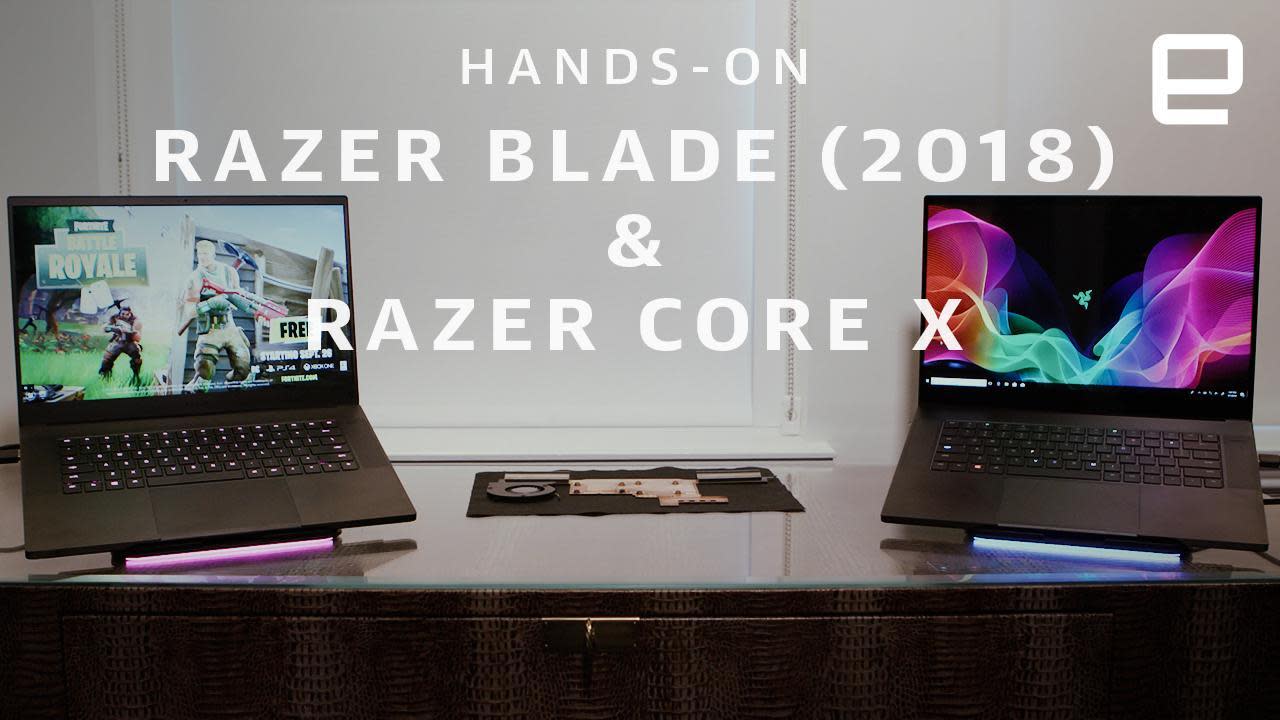 The Razer Blade is back, and it has pretty much all of the features you'd expect from a gaming notebook in 2018. Notably, the company has refined the laptop's design significantly. Gone are the bulky bezels around the last Blade's 14-inch screen. Now there's a 15.6-inch display with incredibly thin borders. With that, the new Razer Blade is ready to face off with the plethora of lighting gaming laptops this year, like the Gigabyte Aero 15X and MSI's GS65 Stealth Thin.

As you'd expect, Razer stuffed in a six-core 8th generation Core i7-8750H CPU, and your choice of NVIDIA GTX 1060 or 1070 Max-Q GPUs. That 15.6-inch screen is available with either a 1080p 60Hz or 144Hz panel, or a 4K multi-touch offering. For the first time, Razer is also color calibrating its displays as they leave the factory. Given the larger screen, the new Blade is also a bit heavier than before, weighing in at 4.56 pounds for the 1080p version and 4.73 pounds for the 4K.

Razer developed a new vapor chamber cooler design to help manage heat across the CPU and GPU, as well as some other hardware that's prone to warming up. It also features low-noise fans with dual exhausts. If they work as advertised, they'd give the Blade a leg up over MSI's otherwise excellent Stealth Thin, which suffered from loud fans.

Based on some brief hands-on time with the Blade, it feels as sturdy as ever thanks to it unibody aluminum frame. The new screen is also a significant step forward from the last model, which just felt a bit dated with its chunky bezels. It's bright and colorful with 100 percent Adobe RGB support. I didn't have a chance to run any games, unfortunately. But I'm looking forward to seeing how they play with the Blade's anti-ghosting keyboard, which helps avoid lost keystrokes. Razer also went the extra mile with its latest trackpad, which is incredibly smooth and expansive. It's not nearly as stiff as touchpads we've seen on other gaming machines.

The Blade is available today starting at $1,899 from Razer's website and select retailers. That model just includes a 60Hz 1080p screen and GTX 1060 GPU, so be prepared to spend a bit more for that 144Hz display and faster graphics.

In this article: gadgetry, gadgets, gaming, gear, hands-on, personal computing, personalcomputing, Razer, RazerBlade, video
All products recommended by Engadget are selected by our editorial team, independent of our parent company. Some of our stories include affiliate links. If you buy something through one of these links, we may earn an affiliate commission.