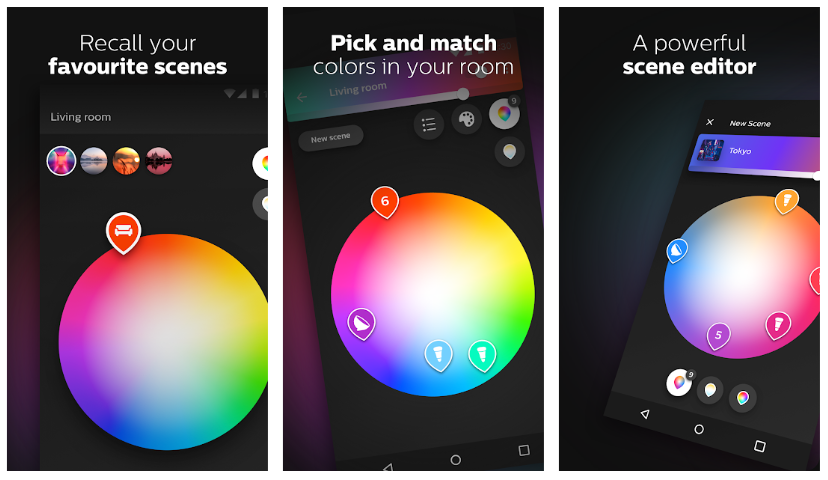 At this year's CES Philips announced a forthcoming update for its Hue smart lights app. The company kept details to a minimum, but now we know exactly what the promised improvements look like, as v3.0 rolls out on the Play Store today. Alongside a raft of feature additions, it's had a complete makeover.

The typography and iconography has had a total overhaul, and its colors pop harder compared to the previous version. Navigation has been tightened up to make it more intuitive to use, and there are now a bunch of helpful shortcuts at hand. For example, you can access the settings of a single light or room with one tap, while tapping and holding on a room or light lets you quickly cycle to one of your last four used scenes.

There's also a new scene editor, 30 new scenes and cleaner color pickers, plus a feature that lets you extract colours from pictures to create a scene around them. Its existing features such as routines, location awareness and sleep scheduling remain largely the same, so you won't need to worry about any unexpected changes following the update.

Previous iterations of the Hue app have been clunky and restrictive, with many users relying on third-party apps to get any real sense of control. Plus, for an app focused on the business of light and color, its interface was pretty uninspiring. So the update is long overdue, and Hue has finally evolved into the app it should have been all along.

In this article: app, color, gear, home, Hue, interiors, lighting, Philips, PlayStore, scenes, smartlights, update
All products recommended by Engadget are selected by our editorial team, independent of our parent company. Some of our stories include affiliate links. If you buy something through one of these links, we may earn an affiliate commission.