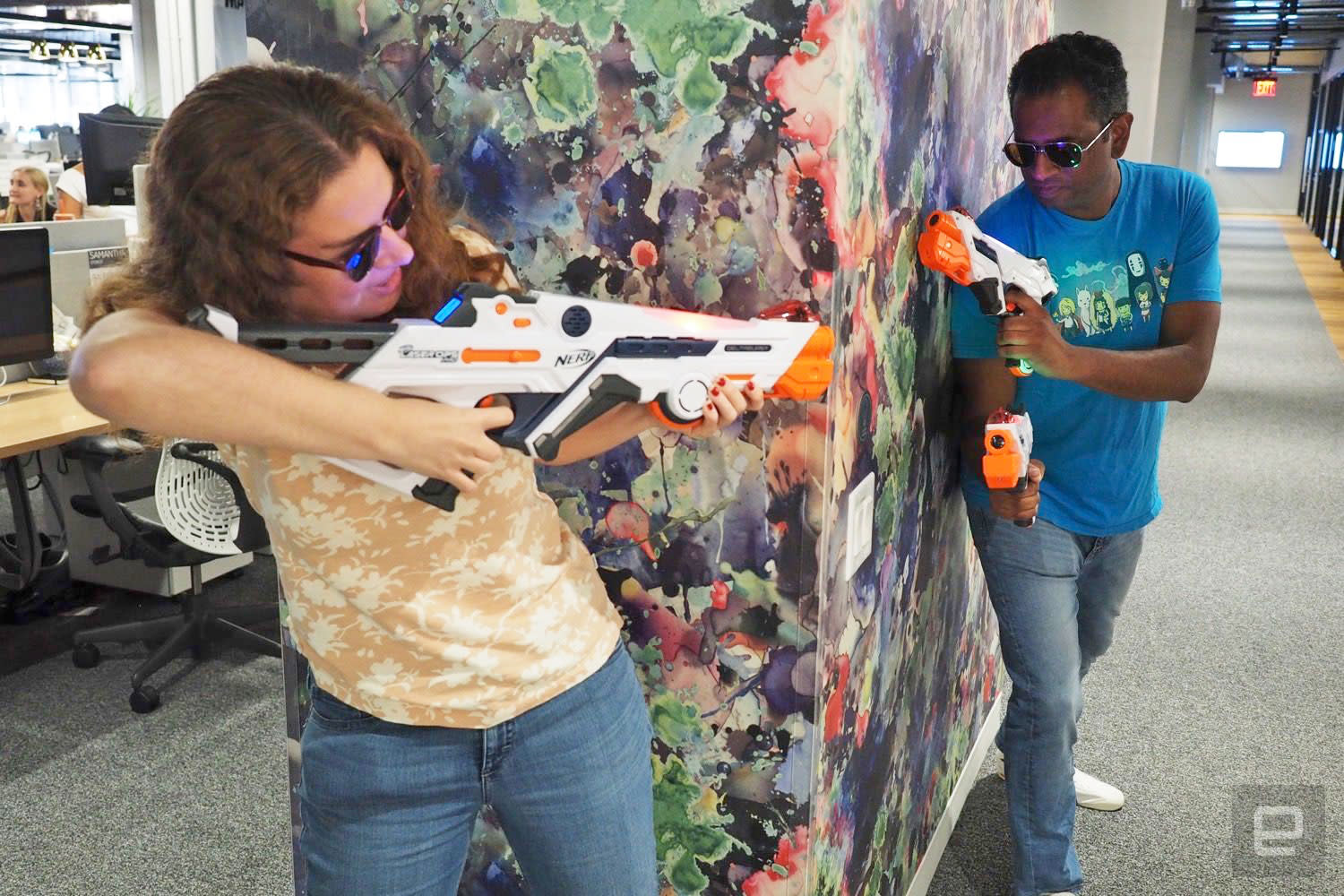 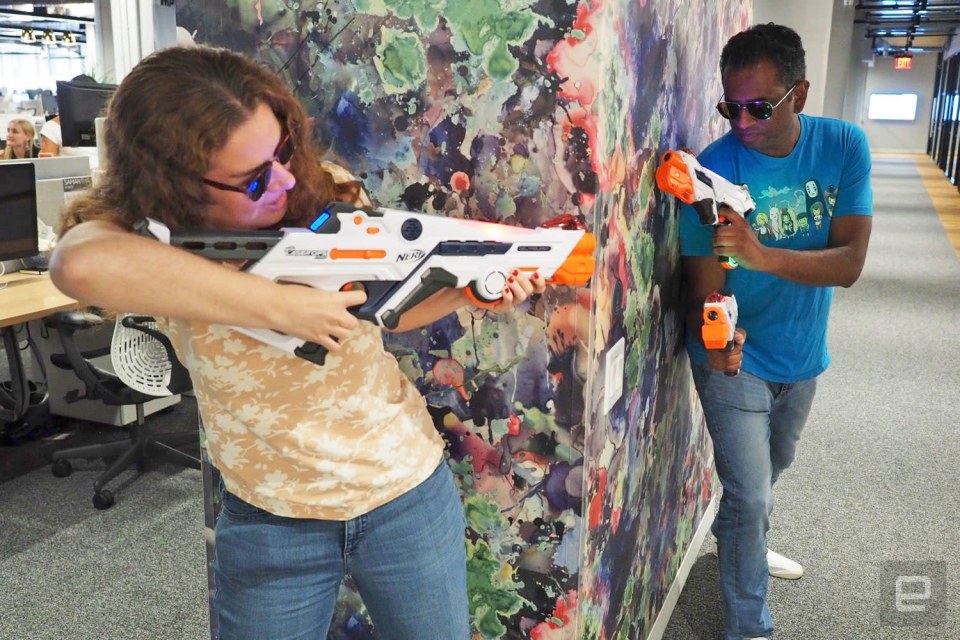 Nerf guns are a lot of fun. But the arguments over whether someone got hit and picking up all those darts when you're done? Not so much. Laser tag has a huge advantage there. Nerf even made its own laser tag guns a few years ago, and this week it updates the line with a video-game-influenced augmented reality upgrade. Now you can track your stats and target virtual opponents — things that fans of foam-dart-based weapons can only dream about. The new Laser Ops Pro line is launching with two models. There's the $30 one-handed Alphapoint blaster (also available in a set of two for $45) and the larger $50 Deltaburst rifle. The designs are reminiscent of weapons you'd find in a game like Mass Effect or Gears of War, except for their white and grey color schemes with orange safety tips. They still look like toys, but not in an embarrassing way. 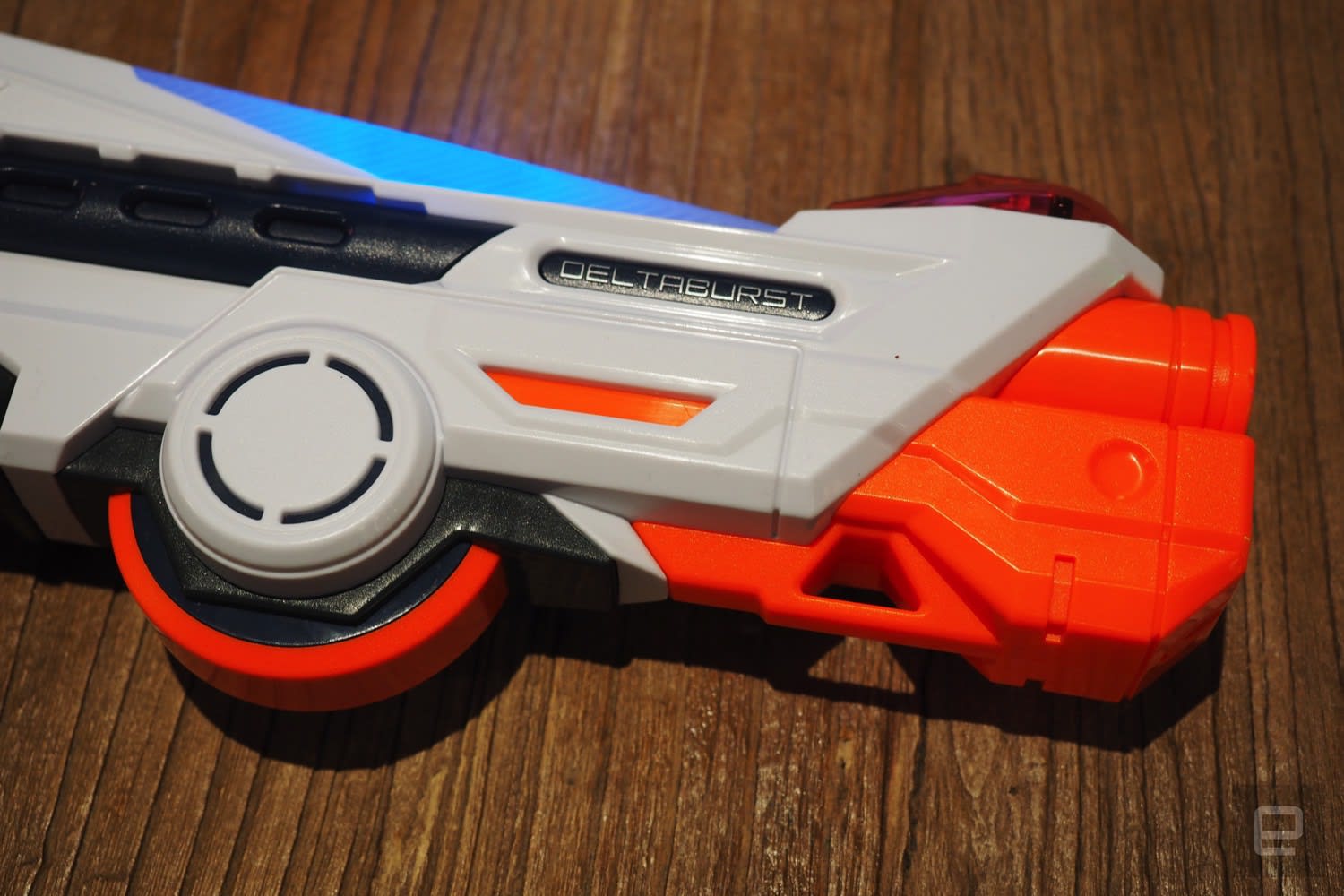 Both function as basic laser tag guns on their own, with the infrared sensor located in the tip of each weapon; no vest is required. Nerf actually thinks this makes the game more fair. Sure a player could cover up the sensor so they can't be shot, but this means they won't be able to fire at other players either. There's a switch on each side that lets you choose between indoor and outdoor use, so the sensor can compensate for the amount of ambient light. You can assign yourself to a team or aim for a free-for-all. Each gun has a "limited" number of shots, with the small Alphapoint firing 12 to the Deltaburst's 18. Of course, it's only a virtual setback: Hitting the orange button on the bottom of each weapon reloads it in a second. The same goes for health: If you lose all of it you're not dropped out of the game for good. It's just a time out and the gun will let you know when you can jump back in. The real point, though, is to connect them to a phone via Bluetooth for some video game flair. The Laser Ops Pro app allows you to sync multiple weapons to a single device so it can keep track of each gun's kill records, status and even dole out power-ups like stronger shots or a health boost. The app adds more game options as well, like how long you want the game to run and whether you want to use power-ups at all.

There's also a mode that lets every player use their phone, which gives them all access to information about the game in real time. You can see a list of players, if they're reloading or out of health and even their location. It's super useful when the other players are hiding, but keep in mind they know where you are too. 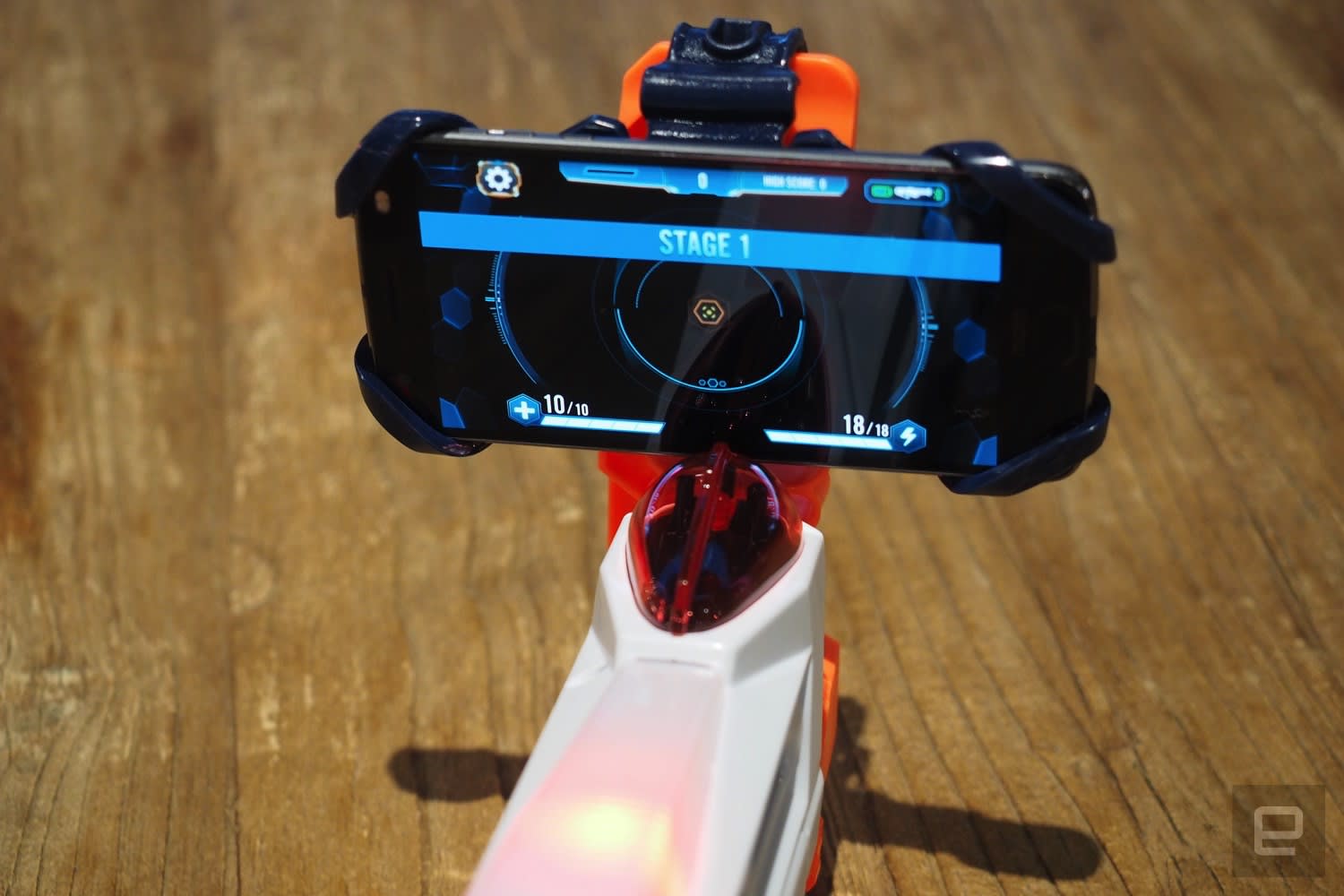 Each phone is meant to be attached to the underside of your arm with a rubber holster. The rubber is slightly tacky and doesn't feel as good as a cloth band would. However, the stretchy nature of it means it can fit many larger phones like a Galaxy Note. It's not perfect for every device: Even if they fit inside the holster, some phones may find their cameras blocked by the rubber straps. In the single player mode, this actually ruins the AR experience. (The designers said they're working on a software fix, though it's unclear how this would function.)

Yes, there is a single player mode for those nights when your friends have things to do besides play. (Something you can't say of many other Nerf products.) It's an AR experience for the Deltaburst where you attach a phone to the end of the rifle and look at the screen. It'll show you your surroundings with enemy drones superimposed on top, attacking you from all sides. It sort of reminded me of Hasbro's Iron Man AR helmet from earlier this year, but without Thanos jumping out of a portal to threaten you. It also this wasn't a 360 degree experience: Most of the enemies appeared in my front field of vision, and I rarely had to turn to find them. The whole experience was a little bland. Unfortunately, you still need to play it a bit to unlock upgrades for the multiplayer laser tag mode. 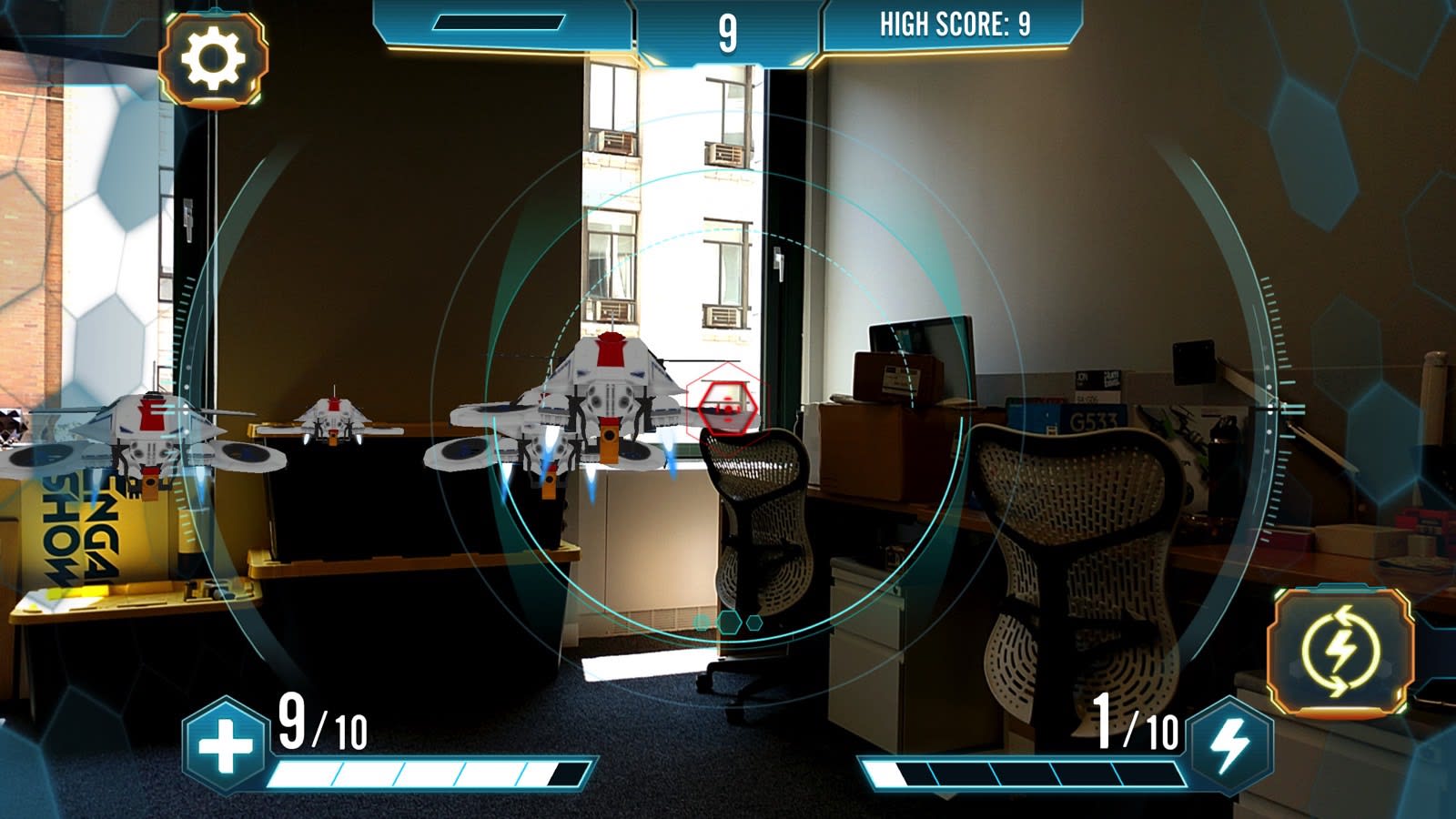 Laser tag is definitely where it's at. There's something to be said for dodging behind furniture to avoid taking damage and making that one perfect shot to knock your opponent out of the game. The battery cost isn't bad: The Alphapoint takes four while the Deltaburst eats six AA batteries, with about 10 hours of life before you need to swap out. Parents will also appreciate not having to buy more darts where they inevitably go missing. The best part of all is that it'll definitely eliminate arguments between kids (and adults) over which one is "out" of the game. Granted, the tip of a laser tag blaster is a much smaller target than an entire body, but you're just gonna have to become a better shot.

David Lumb and Devindra Hardawar both contributed to this post.

In this article: gadgetry, gadgets, gaming, gear, hands-on, hasbro, laseropspro, lasertag, mobile, nerf, toys
All products recommended by Engadget are selected by our editorial team, independent of our parent company. Some of our stories include affiliate links. If you buy something through one of these links, we may earn an affiliate commission.