You'll have to provide your own mid-battle snark, though.

Children love to role play, whether it's pretending to cook in a toy kitchen or swinging plastic swords at each other in the backyard. But lately, more than just about anything else, kids want to be superheroes. To help, toy companies like Hasbro sell costumes, weapons and other props so kids can live out their Captain America and Iron Man fantasies.

But a plastic shield will only take you so far: It can't give you super strength or speed, and you certainly can't throw it at bad guys and have it return to your hands afterward. But Iron Man's a little different, since so much of his power is tied up in the suit. His armor enables him to fly, blast enemies and view the world through its informative heads-up display. The latter element is what Hasbro's new Hero Vision Iron Man AR helmet aims to imitate, using a phone to display its own custom HUD so kids can feel like they're really wearing the armored Avenger's suit.

Disappointingly, the AR app isn't an overlay that feeds you information about the world around you, a la Tony Stark's J.A.R.V.I.S. (or F.R.I.D.A.Y. in the later films). Instead, it's a basic action game, based partially on the upcoming Infinity War movie and developed with input from Marvel Studios. The main villain is Thanos, who pops out of a portal to growl and gesticulate menacingly before sending waves and waves of generic drones to attack you. You aim by looking at the enemies, locking on to your target and raise your hand to fire.

It'd be a fairly generic shooter if it were just a phone game; the magic is unlocked when you're fully kitted out in Iron Man's helmet and gauntlet. The helmet is a standard plastic costume piece on the outside, but inside it has a slot for your device and a fully adjustable eyepiece that should accommodate most children's faces. Adults can wear the helmet too, but the eyepiece will be a bit snug. I was forced to remove my glasses when I put it on. 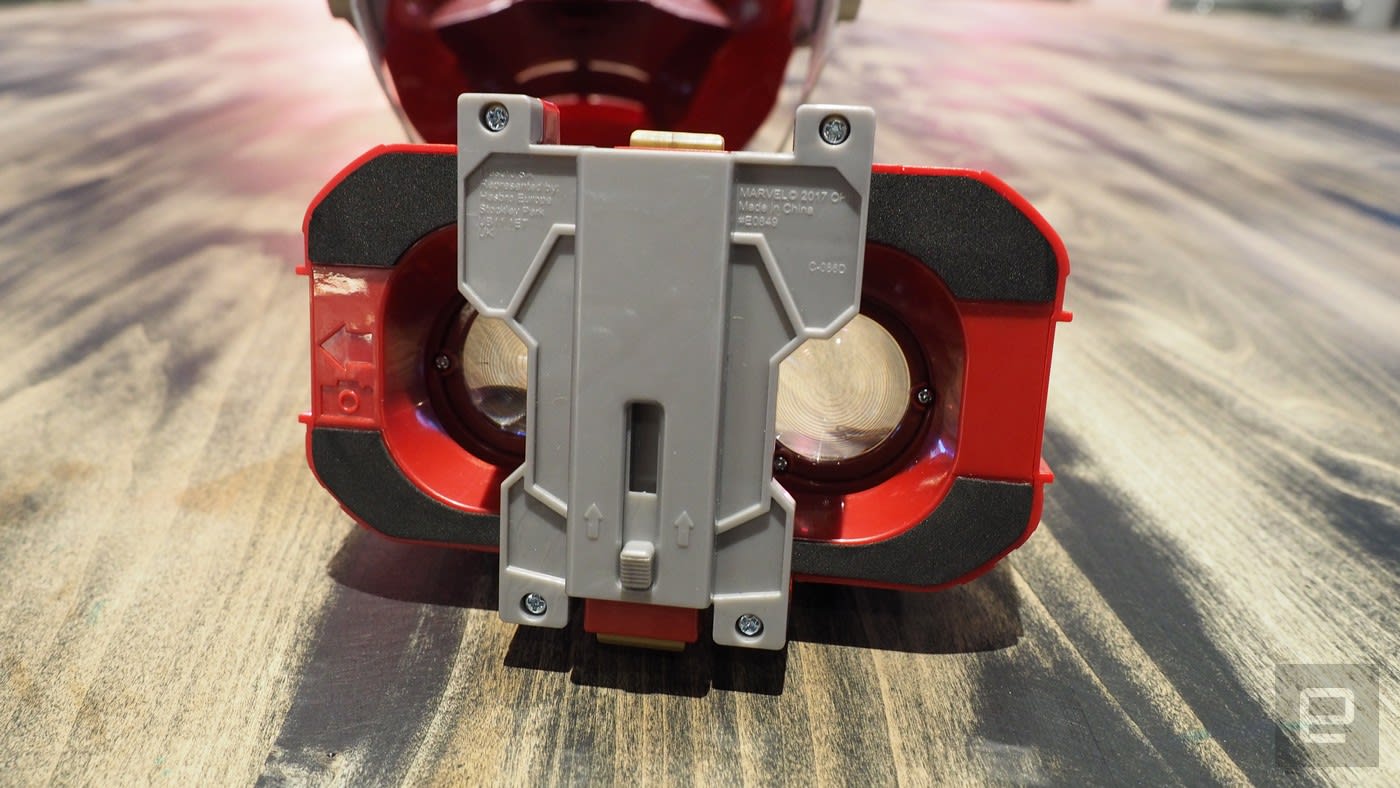 There are no headphones inside the helmet, which relies entirely on your handset for sound. It's fairly low-tech in general: The front of the visor doesn't glow in any way and in fact, you can see the phone through the eye holes. It's a bit of a let down visually, but it's a necessary evil so the phone's camera can see your surroundings. The helmet does an excellent job of blocking out light: I was completely blind when the phone wasn't actually on. However, the phone and goggles can also be removed from the helmet so the kids can just pretend to be Iron Man the old-fashioned way, sans game.

There's a small red gauntlet with markings on it that allows the app to track your hand movements. It also has pegs to place "Infinity Stones" on, which function as power-ups in the game. 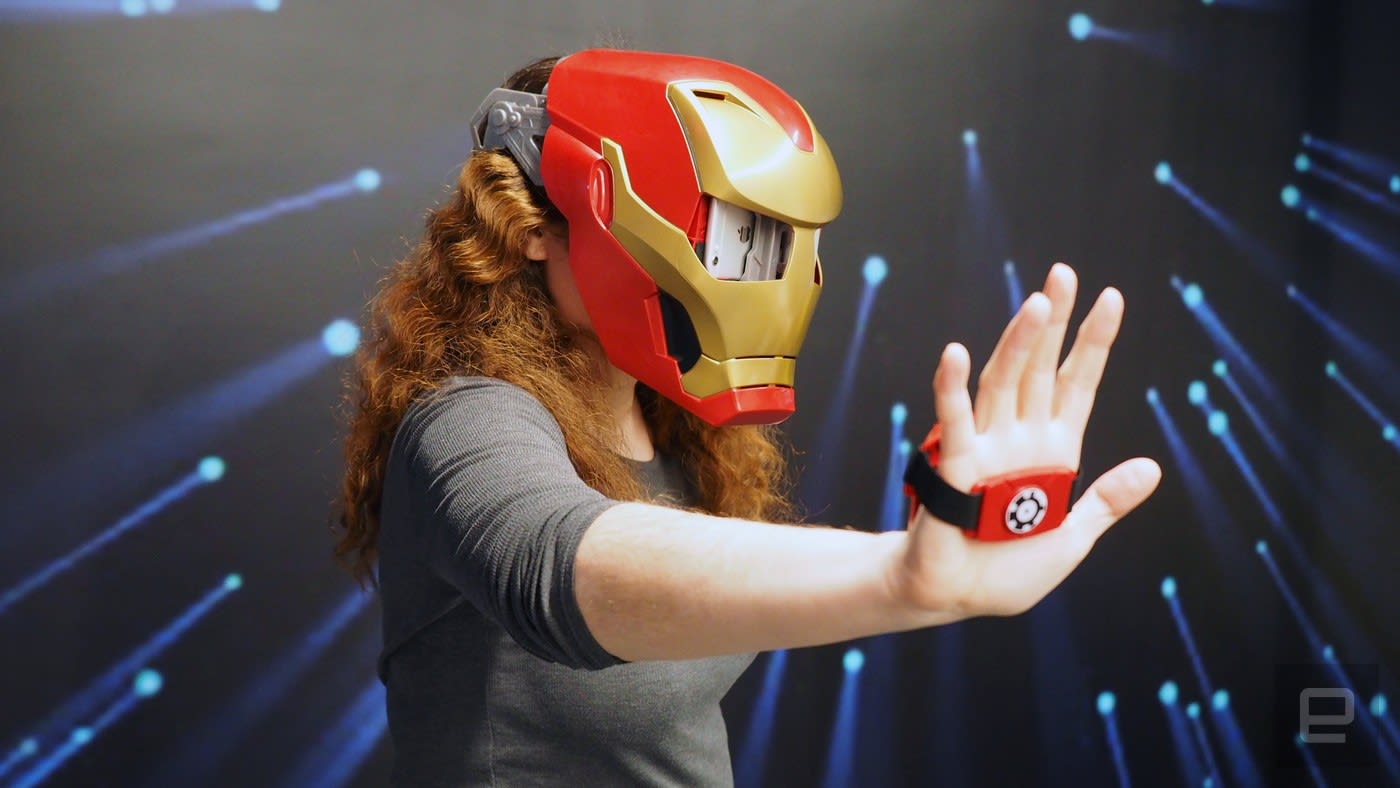 I put the helmet on sans glasses, and tried my hand at a few rounds of fighting Thanos' minions and protecting an unnamed city. The first few levels were a little dull and served as a tutorial, but eventually it started to get a little frantic. I was turning in every direction to take out enemies before they hit me, putting up my hand to block incoming fire and listening to the cacophony of sound effects and voices reverberating in the helmet.

The conference room I was playing in at the time wasn't terribly exciting, but I could see a backyard making for a more interesting backdrop. There's also a freeplay mode planned, which would allow a kid run around with the HUD on, firing at their friends and pets but not having to worry about refilling ammo or taking down galactic villains.

Each round doles out in-game currency that allows you to purchase better weapons and armor, but there's no real-world cash involved, so parents won't have to give out their credit card info here. The game is completely self-contained and doesn't rely on an internet connection. Everything's stored on the device, so Hasbro doesn't need to collect kids' personal data and the game stays COPPA-compliant. Instead, the function of traditional in-app purchases have been replaced by the physical Infinity Stone toys, which Hasbro plans to make and sell more of later this year. As for the main set, it'll be released this spring for $50, and includes the helmet, gauntlet and one Infinity Stone, just in time for kids to act out their favorite scenes from the new Marvel movie.