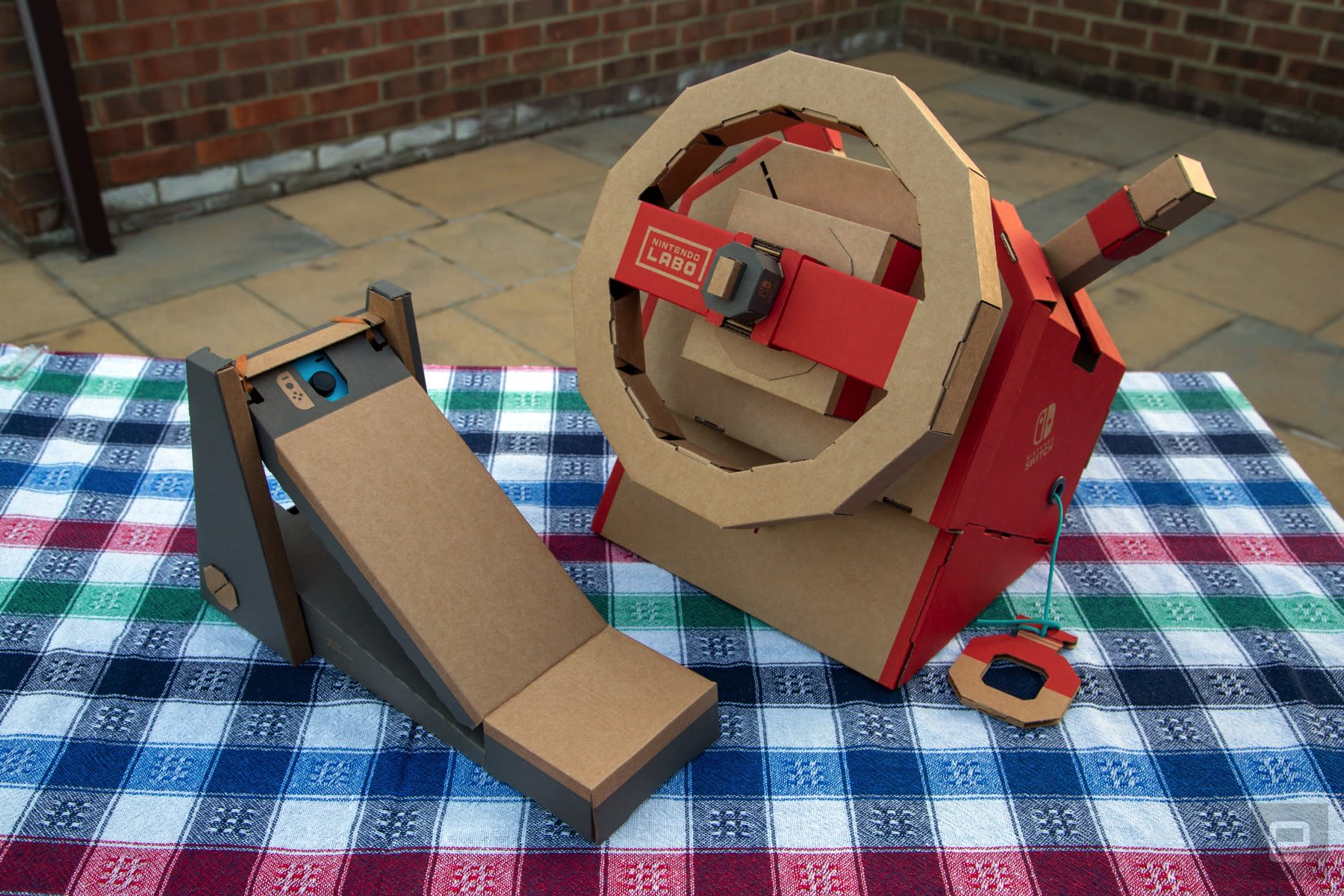 Nintendo Labo has been out for a while now. We've been charmed by the company's inventive designs and the way they fuse cardboard with the Switch's powerful Joy-Con controllers. The product line hasn't been a runaway success, though. In its last quarterly earnings, Nintendo revealed that 1.39 million Labo sets were sold between their debut in April and the end of June 2018. That's by no means a disaster, and not a huge surprise given Labo is more education focused than Nintendo's usual wares. The kits are also a tad more expensive than a typical Switch game like ARMS.

Tomorrow, Nintendo is releasing a third Labo set called the Vehicle Kit. I doubt it will sell 10 million copies, or rival the popularity of PlayStation 4 exclusives like Spider-Man and God of War. I do believe, though, that it's the best Labo kit yet, with satisfying builds and a robust suite of gameplay modes. Together, they stand a decent chance of tempting skeptical parents who worry their little ones will grow tired of the concept after a few days. 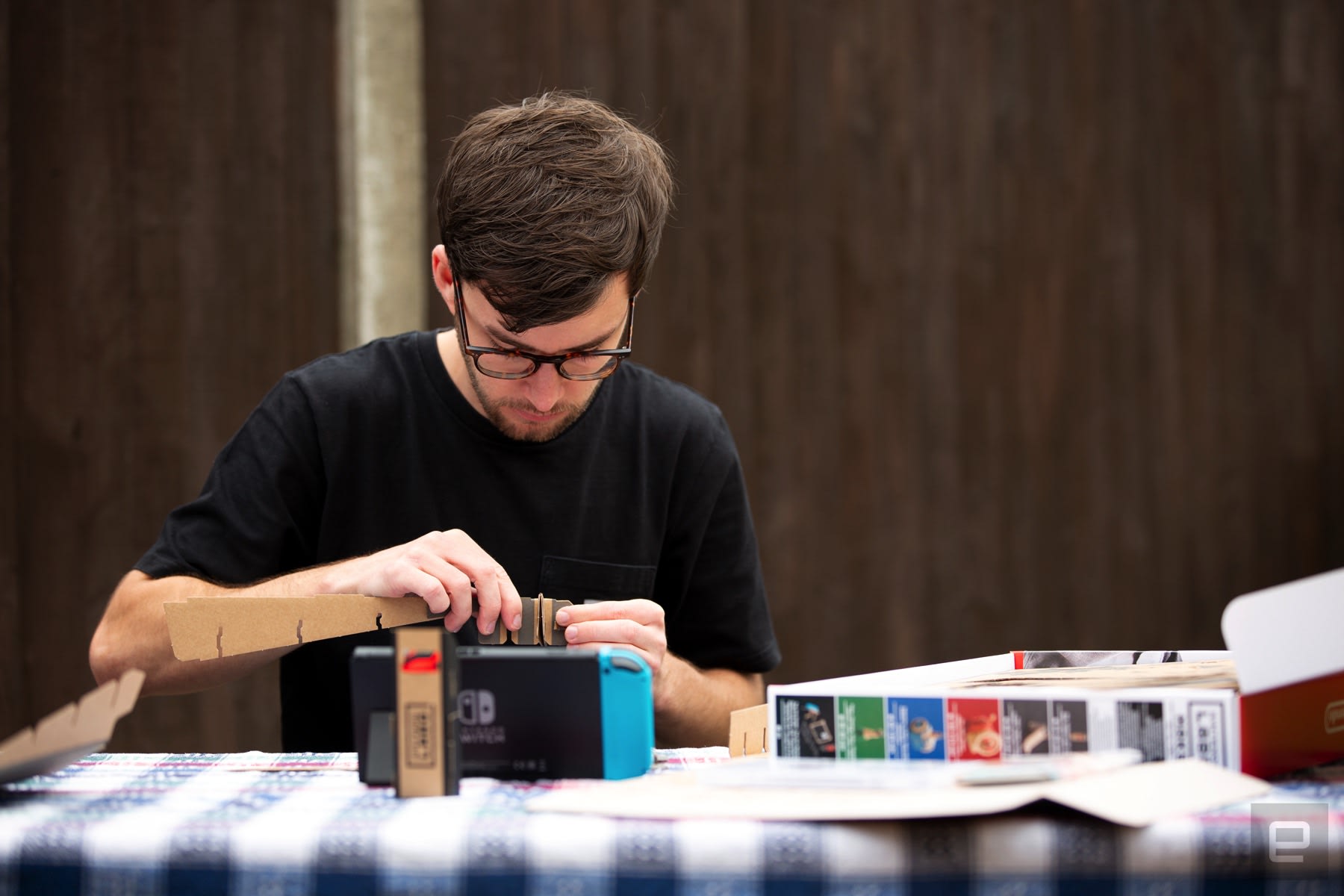 Some Toy-Cons can take three hours to build.

Before you can pilot a virtual monster truck, you have to build some physical props. As with previous Labo kits, these are constructed from large, rectangular sheets with clearly defined pop-out pieces. The new set comes with a Switch game card that contains detailed instructions for each one. Individual steps are conveyed with short videos that you can rewind and rotate at any time. The solution is a huge improvement over the paper pamphlets that ship with LEGO sets and Ikea flat-pack furniture. I also appreciated the child-friendly jokes that Nintendo peppered into each step.

Everything slots and folds together in an elegant way. Even now, five months after Labo's debut, I'm impressed that none of the kits require a pair of scissors or pot of glue. It keeps your Nintendo Switch safe and ensures that your little one can open the box and get stuck in right away. Occasionally, you'll have to dig into an included bag that contains an assortment of string, plastic washers and elastic bands. These parts are a fraction of the final kit though, and rarely feel like a design cop-out.

The Vehicle Kit offers five major Toy-Cons: a wheel, an acceleration pedal, a flight joystick and a spray can. There's also enough cardboard to build a Joy-Con holder, a wheel-mounted Switch stand, and two small Joy-Con "keys" that are required to operate all of the Toy-Cons except for the pedal. They all take a long time to complete. Like, seriously long. Nintendo estimates that the wheel alone will take you three hours to finish. Thankfully, each build is broken down into stages, with helpful reminders to take a breather after each one. I constructed everything over a weekend and was mentally drained at the end. If you're making the kits with children, I highly recommend spreading them out over a fortnight or two.

You'll need a lot of space to store your finished Toy-Cons.

Thankfully, you're rewarded with a game after building every Toy-Con. The pedal, for instance, can be used on its own to play a slot car-inspired racer. Once you've inserted the left Joy-Con, you can sit down and press the pedal to send a tiny racer whizzing around the track. It's not much, but you can play against up to three other people holding single Joy-Cons.

The best game on the card, by far, is called Adventure. It's an open-world affair with 80 distinct challenges spread across 10 regional zones. You play with the pedal, which has the left Joy-Con inside, and either the wheel, joystick or submarine cranks, that require the right Joy-Con key. Inserting this small, oblong piece of cardboard will summon the corresponding vehicle in game. You're then free to roam around the world, which is fairly large, and tackle the missions in any order. Most require a specific mode of transportation, however, so you'll need to regularly swap between the four-wheeler, plane and submarine.

The objectives are simply an excuse to pilot each vehicle and test your mastery of the corresponding Toy-Cons.

None of the missions are particularly challenging. Labo is designed, after all, to be accessible for anyone aged six and above. You might need to knock a large golf ball into an equally enormous hole, find a hidden flag in the middle of a Stonehenge-inspired rock formation, or round up some brightly colored cows whohave wandered away from their paddock.

The objectives are simply an excuse to pilot each vehicle and test your mastery of the corresponding Toy-Cons. The red wheel, for example, has two levers at the back (where your turn signals would usually be) that activate tools on the right and left-hand side of the vehicle. You can also rotate the cubes at the end of each shaft to change items. These include bombs, which you can throw farther by holding down the correct lever, radio antennas and windscreen wipers. The most important tool, though, is the nozzle that's required to refuel your truck at gas stations. If you overshoot a turn or point of interest, you can select reverse gear with a handle on the left-hand side of the wheel. There's also a handle attached to a piece of string that you can pull for a speed boost. Early in adventure mode, I had a blast navigating up a tall, rocky mountainside. I gripped the wheel with my left hand, rocking it from side to side as the path snaked upward. My right hand was poised on the boost handle, ready to give it a quick tug whenever the incline became too great for my plucky truck.

The sub is trickier to pilot. The vehicle has two propellers that you control with the wheels on the blue Toy-Con. Point the engines up and your craft will slowly descend to the ocean floor, and vice versa. To turn, you have to keep one set of propellers flat and the other facing up or down. It can be surprisingly difficult to make a beeline for mission-critical objects when you're deep underwater. Thankfully, you can press a rectangular button on the sub's Toy-Con to deploy an anchor that acts like a grappling hook.

Finally, there's the plane, which leverages the green joystick Toy-Con. It controls as you would expect and has a trigger button on the back for firing rockets. None of the Toy-Cons are going to rival a serious gaming wheel or flight stick, but they're simple to use and responsive enough for most of the challenges. Occasionally the car would move in a way I didn't expect, but as none of the tasks have a hard time limit, it rarely bothered me. If you struggle for long enough you might run out of fuel, but that's about it.

All of the Toy-Cons are sturdily built, however I did begin to notice some flex and creaking.

Tackling missions will slowly unlock rally tracks. These have a set time limit and reward you with extra seconds every time you pass through a gate. Some of the courses are genuinely tricky, which made me grip the wheel more tightly than usual. All of the Toy-Cons are sturdily built, however I did begin to notice some flex and creaking. It was never concerning but it made me wonder how long each prop would last, especially if they were being used by a hyperactive six-year-old. (Unfortunately, I don't have a small child to test this durability question.)

Customizing your vehicles in Paint Studio is a blast.

If you fancy a break from Adventure mode, there's also a straightforward circuit racer and a competitive battle mode that uses the levers on the wheel to launch mechanical punches. They're enjoyable distractions, but after a few hours I began to tire of both. Instead, I found myself drawn to the Paint Studio, which lets you customize the various vehicles in Adventure mode. The aerosol Toy-Con, combined with the Joy-Con key, allows you to select different colors and spray just like a regular graffiti artist. I had a blast coloring my car, plane and submarine so that they looked like something out of Nintendo's Splatoon shooter.

If you want to learn something, you should delve into the Discover section of the game card. Here, Nintendo offers a number of educational lessons about each Toy-Con and the parts inside both the left and right Joy-Con. They're presented through lively text conversations with a trio of fictional characters, led by Professor Jerry Riggs. While they're well written, the lack of voice acting means they quickly become stale. I read a dozen or so lessons before giving up and heading back to the game's Adventure mode.

Rounding out the package is the advanced Toy-Con Garage mode. Here, you can create new inventions, like a rubber-band guitar, using a node-based programming language. The feature can be daunting for newcomers, myself included, but opens up potentially limitless projects based around the Switch and cardboard Toy-Cons. 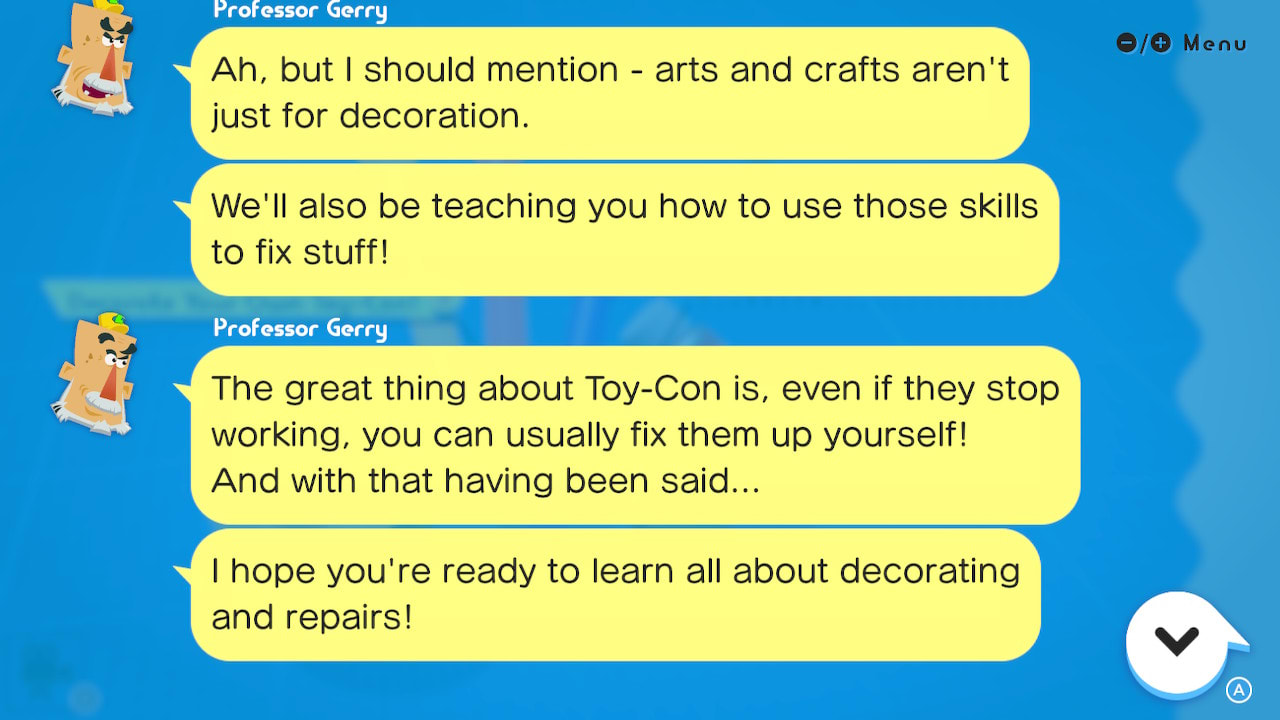 I quickly tired of the lessons in Discover mode.

Nintendo's latest Labo kit offers some excellent Toy-Cons and a large number of games to play them with. Most of these are fun, but shallow experiences that you'll probably tire of after a few sessions. Adventure mode isn't as expansive as something like The Crew 2, which offers racing by land, sea and air on the PlayStation 4, Xbox One and PC, but its missions are entertaining and gave my limbs a good excuse to grapple with the steering wheel, joystick and submarine controls.

As a whole, I think the kit represents good value for money. In the future, I hope Nintendo expands on Adventure mode and bundles digital experiences that match the depth and complexity of blockbuster Switch games like The Legend of Zelda: Breath of the Wild and Super Mario Odyssey. These would extend the value of Labo and give players a reason to keep booting up their cardboard controllers. The Toy-Con Garage is fantastic for creative types, but Nintendo needs to appeal more to people who value entertainment as much, if not more than educational content.

All products recommended by Engadget are selected by our editorial team, independent of our parent company. Some of our stories include affiliate links. If you buy something through one of these links, we may earn an affiliate commission. All prices are correct at the time of publishing.
View All Comments
Nintendo Labo Vehicle Kit: Rewarding builds with better games