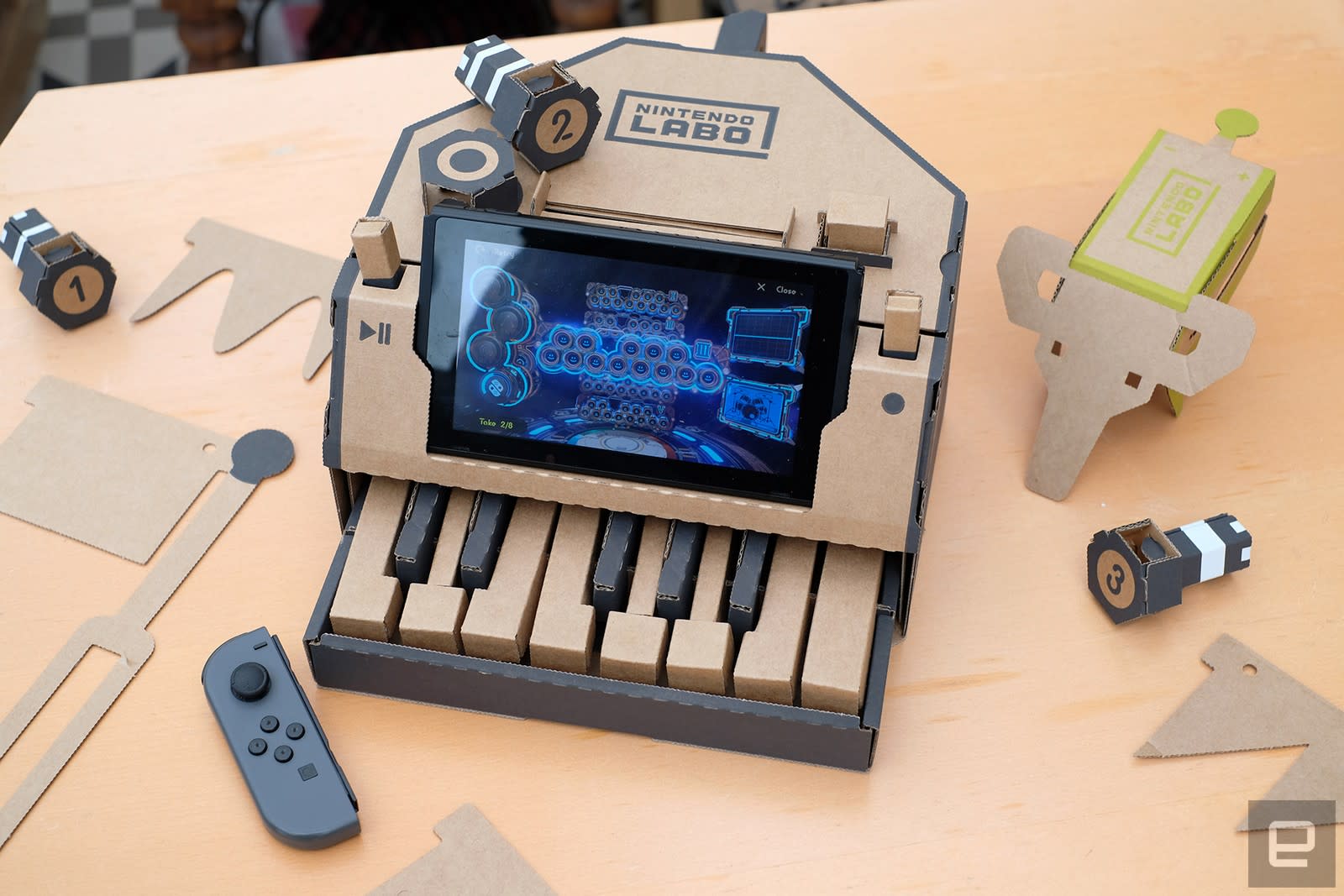 Over the last week, I've spent more than 20 hours folding and assembling cardboard, and I've learned a few things. One: You don't want to follow exactly in my footsteps. And two: Nintendo's Labo is ingenious. It's something few other companies could have produced and turns the Switch into so much more than a game console: With Labo, it's an engine powering a whole new world of DIY creations. The only downside? Building Labo kits can be a pretty huge time sink. But for some, that might be a good thing.

Nintendo is launching Labo with two offerings: A $70 Variety Pack, which includes the piano, motorbike, fishing rod, RC car and house Toy-Cons; and an $80 kit that lets you step into the shoes of a giant robot. At the most basic level, Labo kits are just cardboard shells. Inside each box, you'll find stacks of thick sheets, along with a handful of other components like stickers and string. These really are do-it-yourself toys -- you won't actually be able to play anything until you put in the build time. 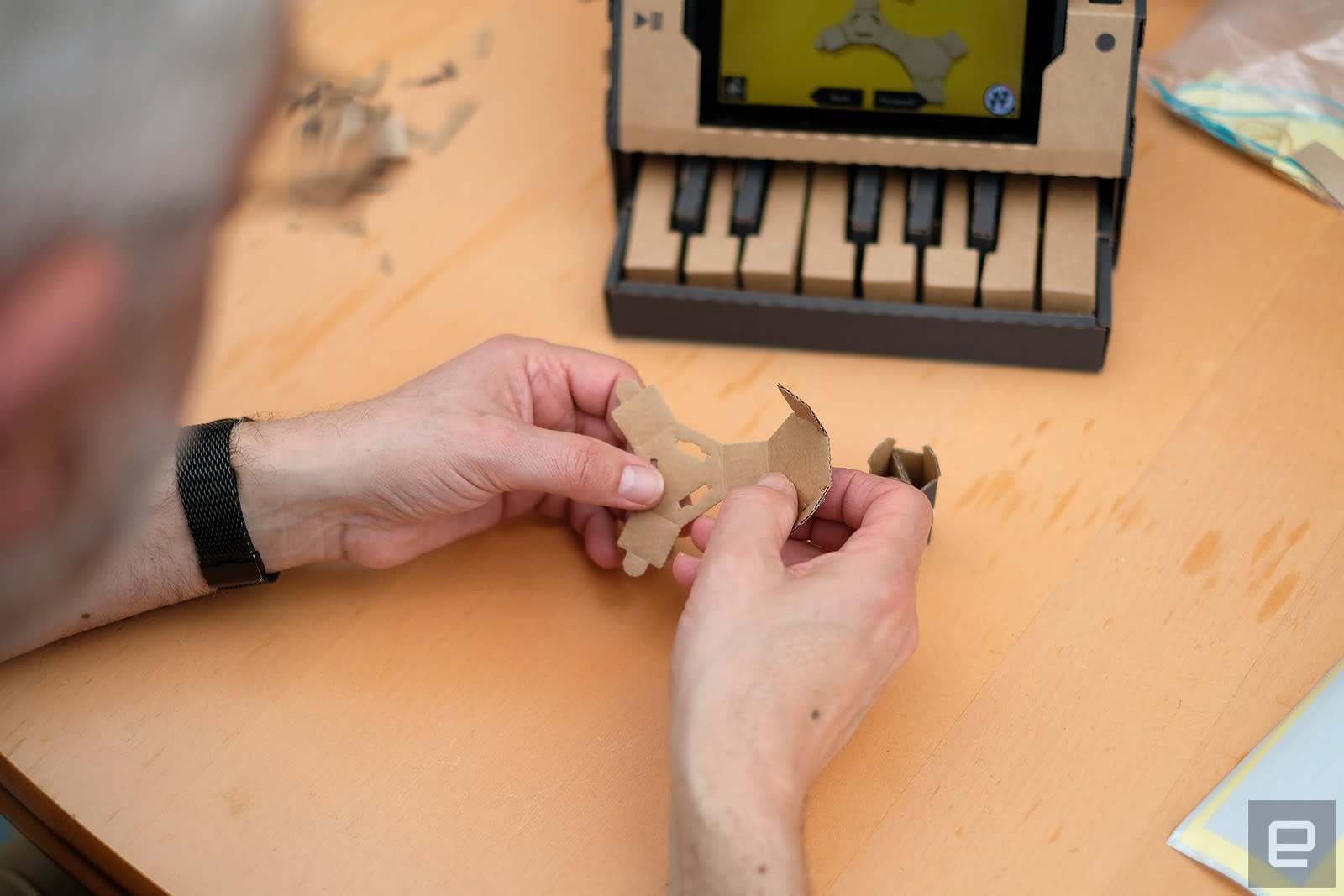 Like any good Nintendo game, you start out by learning the basics: You get instructions from your Switch, punch out the required pieces, crease them just so and connect notches. That's the vast majority of the Labo experience. Of course, things get more complicated for larger kits, but you'll never stray too far from those core skills. It's the same principle at work in a Mario game. Things may get harder, but ultimately you can beat them with what you learn in the first few levels.

While you could just jump straight into the Labo Robot Kit, the Variety package is the smarter choice, because it offers more to do and a gentler learning curve. It also features the simplest Labo project, the RC Car Toy-Con, which should take you around 10 minutes to build. It's nothing more than a piece of cardboard folded to accommodate two Joy-Cons. You can move it around remotely from the Switch using the HD rumble vibration feature.

Sure, that might not seem exciting, but it gives you a glimpse at Labo's real secret: unlocking crazy new uses for the Switch's hardware. Plenty of kits use HD rumble in some form, but they also take advantage of the accelerometers and gyroscopes in the controllers. Most interestingly, Labo finally puts the right Joy-Con's infrared sensor to good use. It can track motion, gestures and distance, and it's something almost every Labo kit relies on. With the piano, for example, it tracks the movement of white stickers behind the keys to figure out what you're pressing. And with the robot, the IR sensor measures the placement of the backpack's pistons, which is how it moves your giant robot arms and legs on the Switch's screen. 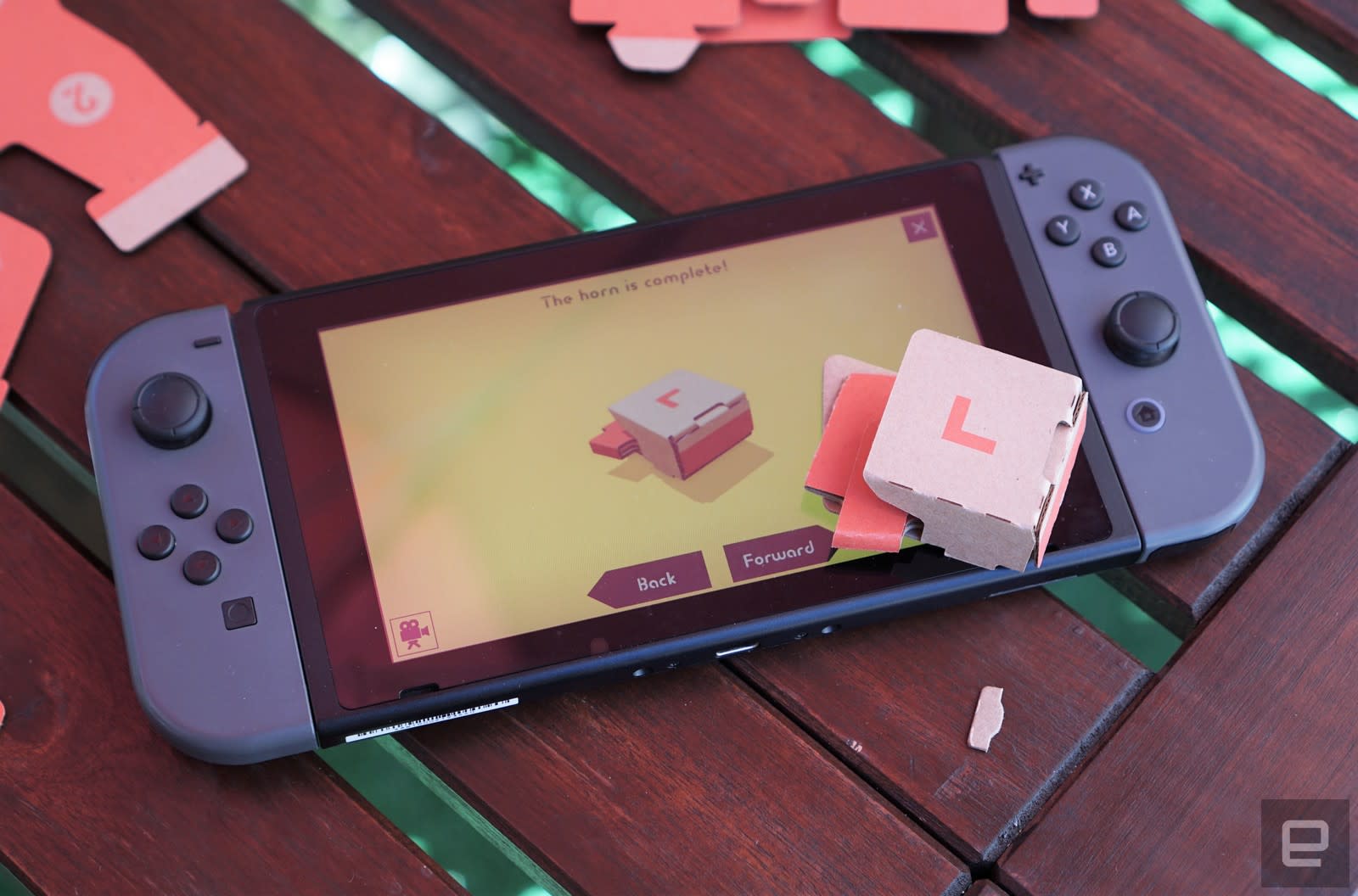 That all might sound complex, but Nintendo makes the process of building Labo kits relatively painless. The Switch's on-screen instructions are clear and precise, and it's also pretty obvious that Nintendo's copywriters are having a lot of fun. The tone of their language is breezy and approachable -- at one point while building the motorbike Toy-Con, the instructions reminded me to fold in one obscure notch by saying "don't forget about this guy." That goes a long way toward making the build experience less of a slog. You can use the touchscreen to get a better view every step of the way, by either panning around the 3D models of the pieces or zooming into a specific section. Both are helpful if you're having trouble getting some pieces to connect.

The actual construction process is straightforward, but I quickly learned that the main obstacle with Labo is time. You'll have to devote at least two hours to every kit, and more if you're helping a kid along. It took me three-and-a-half hours to put the bike together, and that's not particularly complex. The fishing rod, which features a unique crank-and-string mechanism, took around four hours, and the piano another three. 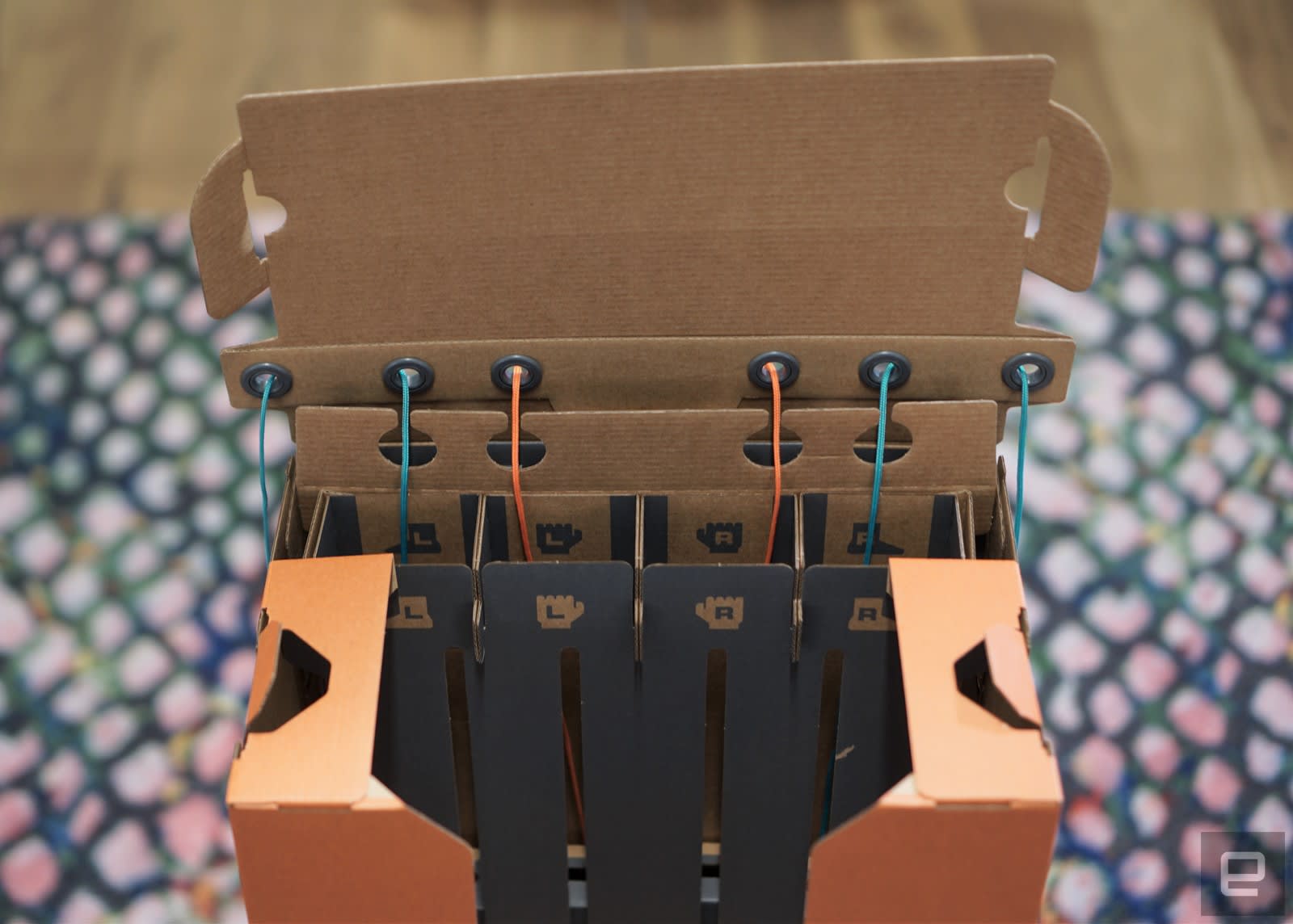 The Labo robot kit feels like a boss battle -- it's incredibly complicated and took close to five hours to finish. Of course, I wasn't diving into Labo in an ideal way. I was pushing myself to complete as many kits as I could for this review. I'd imagine many consumers would treat Labo like a huge jigsaw puzzle or model kit -- an ongoing project that you enjoy at your leisure. I could see parents and kids devoting a weekend to a single Labo kit, giving them ample time to actually play with it later in the week.

I found something almost meditative about the Labo building process. There's something relaxing about sitting in a comfy spot and creasing cardboard for hours on end. And once you're done, you have a creation you can be proud of. 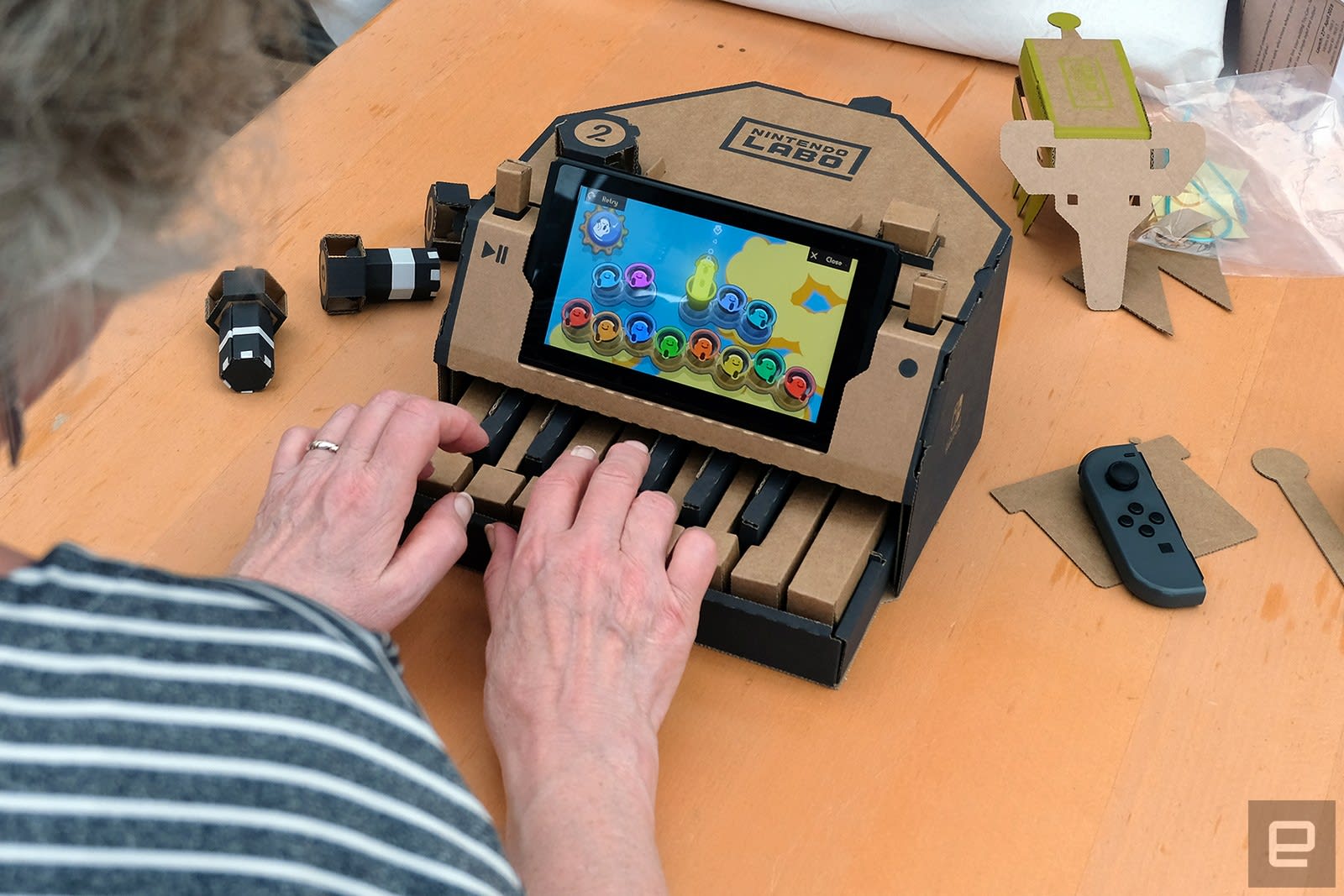 Your reward for completing each Labo kit are small games tailored to the cardboard hardware. Some are relatively simple, like the virtual race track you can play with the Motorbike. It's a fun proof of concept, thanks to accurate motion controls, but it didn't hold my attention for too long. The track is pretty simple, and your only goal is to collect as many balloons as you can. You can also build your own tracks, which is where I think most Labo owners will spend more of their time.

I had a lot more fun with the Labo fishing game. The rod is a joy to use, and it's one of the few games to use the Switch in a vertical orientation. It all goes a long way toward making you feel like you're actually fishing. Once again, the motion controls shine, letting you adjust your virtual reel by moving physically. It does a surprisingly good job of re-creating the feeling of sitting on a dock and waiting for a bite to come in. And you'll know when you get one, thanks to the HD rumble Feedback.

I'm no musician, but I was impressed by the versatility of the Toy-Con piano. It has only 13 keys, yet it's enough for you to create a few tunes. The "Toy Piano" mode technically offers 1½ octaves, allowing you to reach 10 notes with the pitch toggle. A few accessories also let you turn the piano notes into a gleeful chorus, a bunch of meowing cats or groaning old men. It's weird, but kids will love it. (I imagine parents might get annoyed, but that's easily solved with a pair of headphones.)

The more advanced "Studio Piano" mode covers five octaves, but they're even tougher to access with the flimsy toggle button. You can also record tunes there, but since I'm not even a piano novice, I didn't spend much time in that mode. I was surprised Nintendo didn't have any piano tutorials available with the Toy-Con -- it's the perfect way to teach first-timers the basics. (Engadget's Aaron Souppouris disagrees since even basic child keyboards let you use multiple octaves easily.) 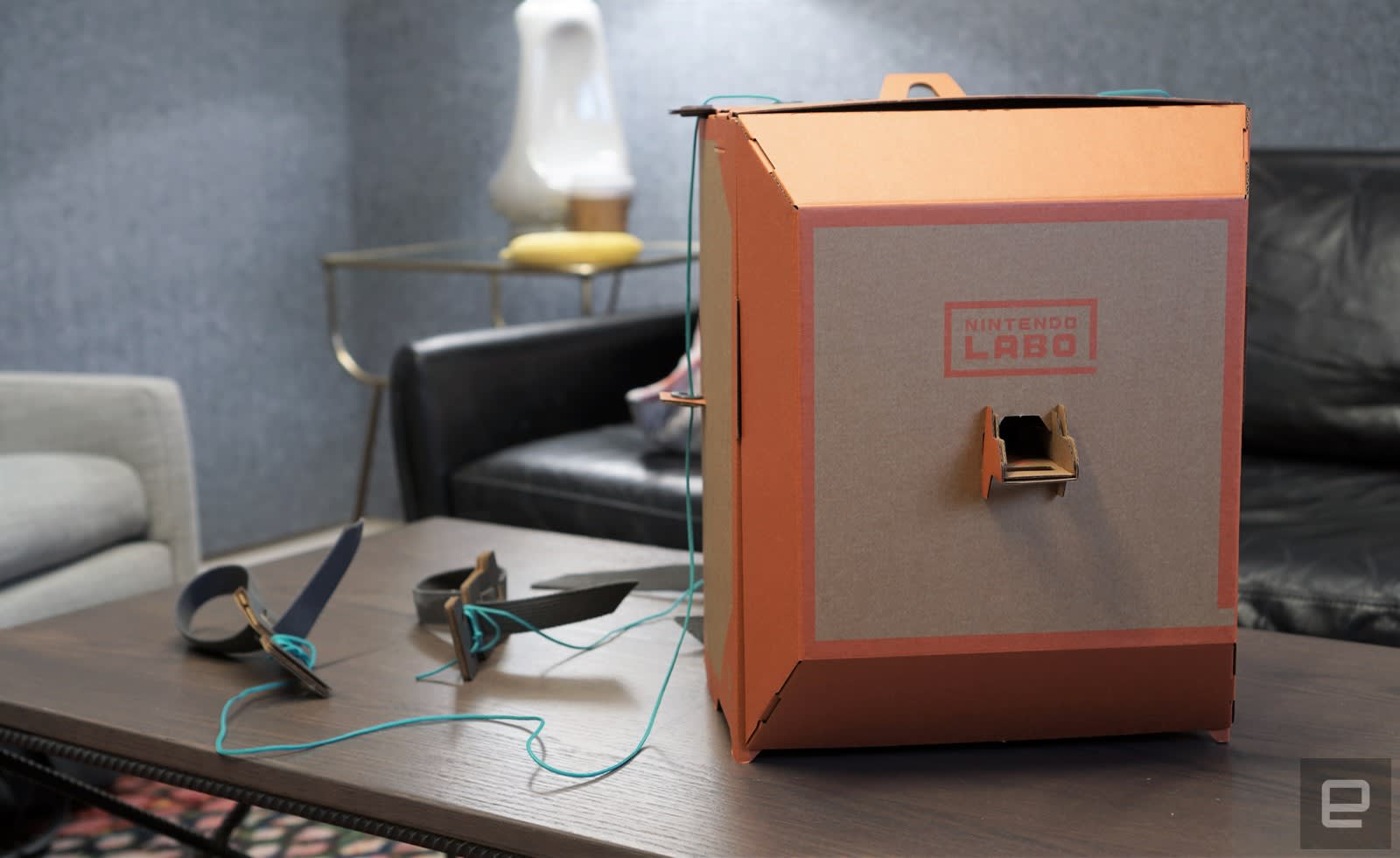 I also had a blast with the Robot Toy-Con, which is really more of an exo-suit. It's made up of a large backpack, two foot straps, two arm-control straps (which you simply grip onto) and a visor for head-tracking. The backpack is the real brains of the kit: It houses the pistons and strings that are used to track your virtual robot's movement. Once I got everything no (which, admittedly, was a bit of a struggle), I was able to virtually traverse a city as a giant machine, smash buildings and punch enemies into oblivion. You move by taking large steps and punch by pulling the arm straps forward.

It's the one Toy-Con that works best with the Switch docked, because you'll want to see your carnage on a big screen. You can also customize your robot, as well as battle a friend in a versus mode. Just a word of warning: If you're very tall or have wide shoulders, there's a chance the backpack might not fit. 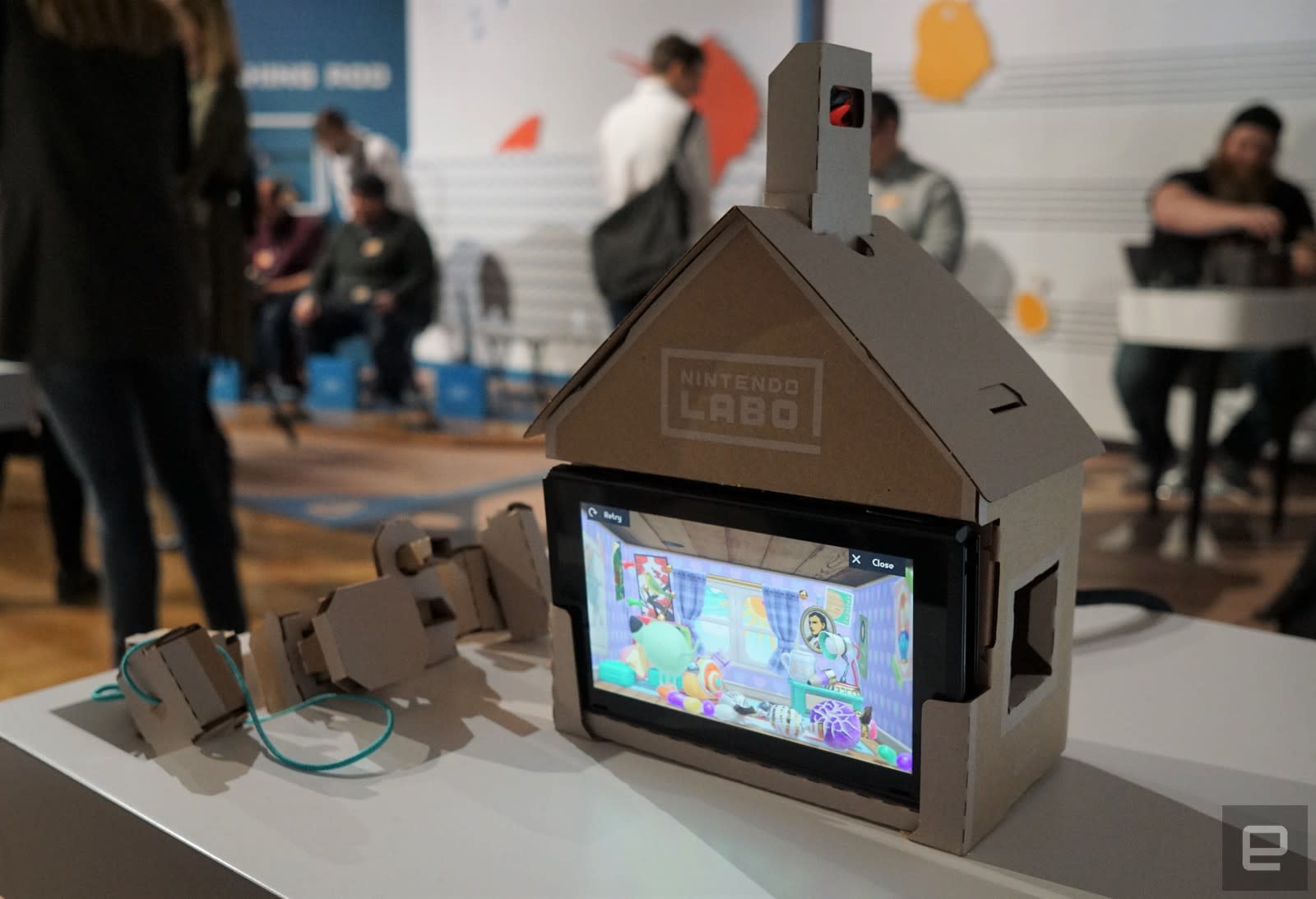 Unfortunately, I didn't have a chance to complete the Toy-Con house. It's basically Nintendo's modern spin on a dollhouse, with the Switch at the center. Inside lives a virtual pet that you can feed and interact with (and if you're feeling mischievous, you can lift the house up and watch them bounce off the walls). You can also change the time of day, fill the house with water, and lull your pet to sleep using a few blocks, which plug into the side of the Toy-Con. By mixing and matching those accessories, you also unlock a few mini-games to play with your pet, like bowling and jump rope. Based on my time with it at the Labo preview event, it seems less intriguing than the other Toy-Cons, but it could be fun for kids who can't handle complex motion controls.

Labo has tons of untapped potential hiding in the Toy-Con Garage, an advanced area that lets you build your own fun. You could, for example, create a makeshift electric guitar using the Joy-Cons, or change how the existing Toy-Cons work, using a simple interface. I didn't have much time to explore the Garage, but it seems genuinely useful, especially once you get bored of the built-in Labo games. It could also be a useful tool for schools to teach rudimentary programming concepts. 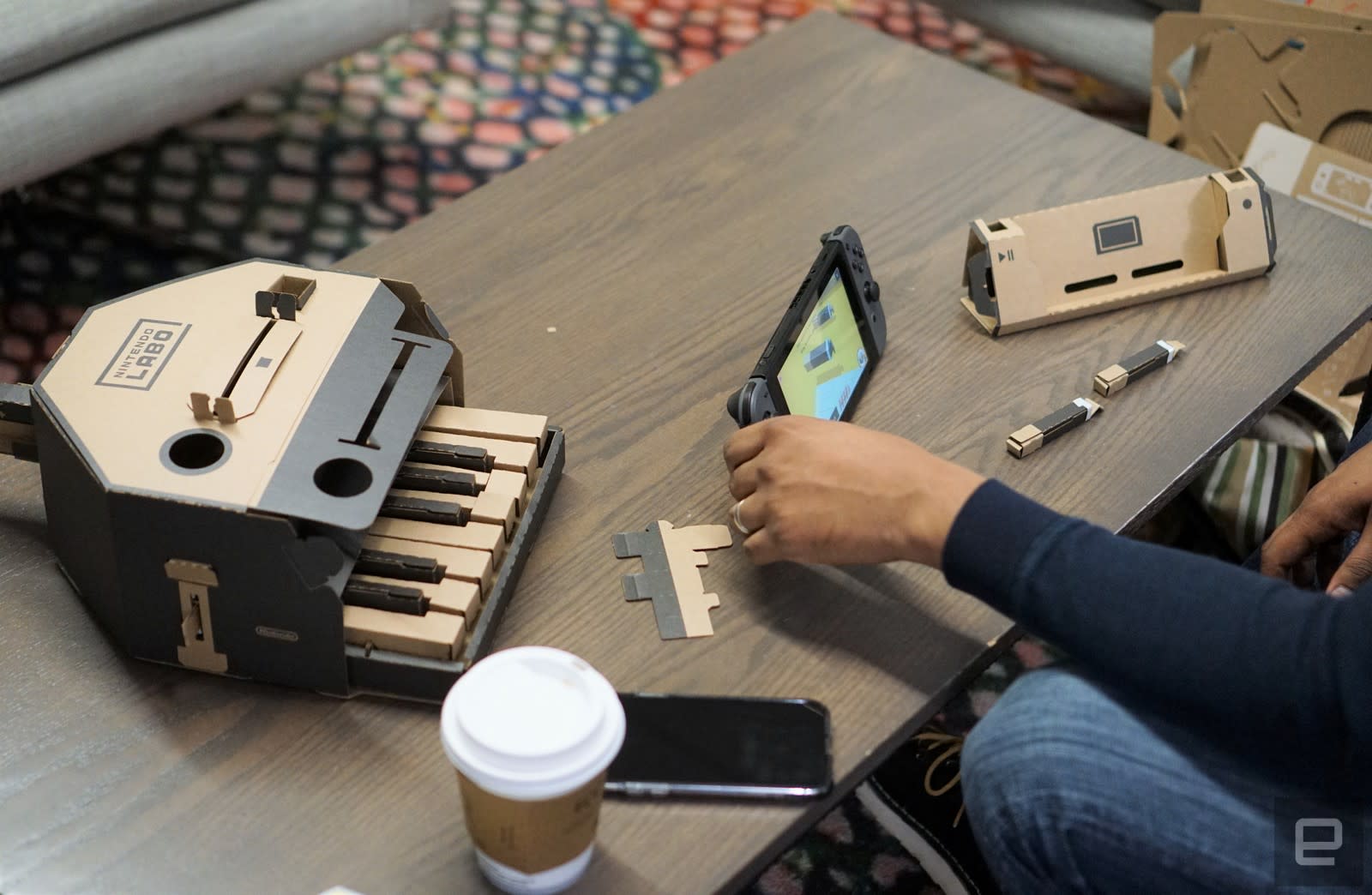 I wouldn't be too surprised to see Nintendo make more Labo games for these Toy-Cons eventually. It only makes sense, since owners will eventually be hungry for more content. The company has also given us a glimpse at a few other Toy-Cons in Labo's launch video, including a racing wheel, shotgun and camera. There's no word on when those will arrive, but they'd clearly be a great way to rekindle interest during the holidays.

Since I've had less than a week with the kits, I don't have a sense of their durability. But I was surprised by how sturdy they felt. Who knows what they'll look like after a few months of heavy use, though. Nintendo has wisely made Labo sheets and accessories available at its online store, so you've got an option when you inevitably step on a Toy-Con. At $70 and $80, the Labo kits aren't exactly cheap, but they're in line with similar DIY toys, like Mattel's Kamigami. 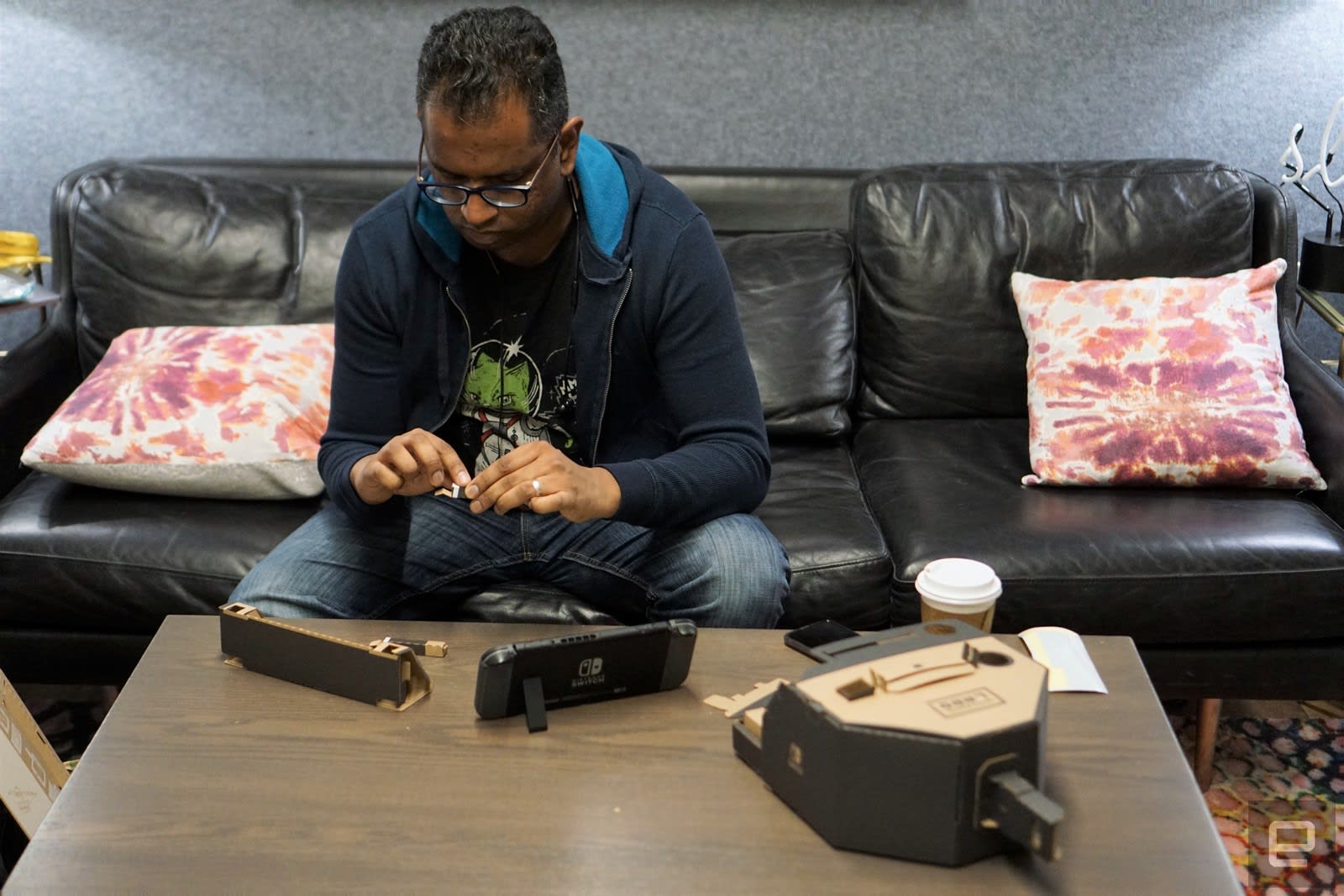 While I had my doubts early on, Nintendo managed to deliver something truly unique with Labo. After getting us off our couches with the Wii, and bringing the power of console gaming anywhere with the Switch, Nintendo has now given us the tools to build our own gaming experiences.

All products recommended by Engadget are selected by our editorial team, independent of our parent company. Some of our stories include affiliate links. If you buy something through one of these links, we may earn an affiliate commission. All prices are correct at the time of publishing.
View All Comments
Nintendo Labo review: A labor of love