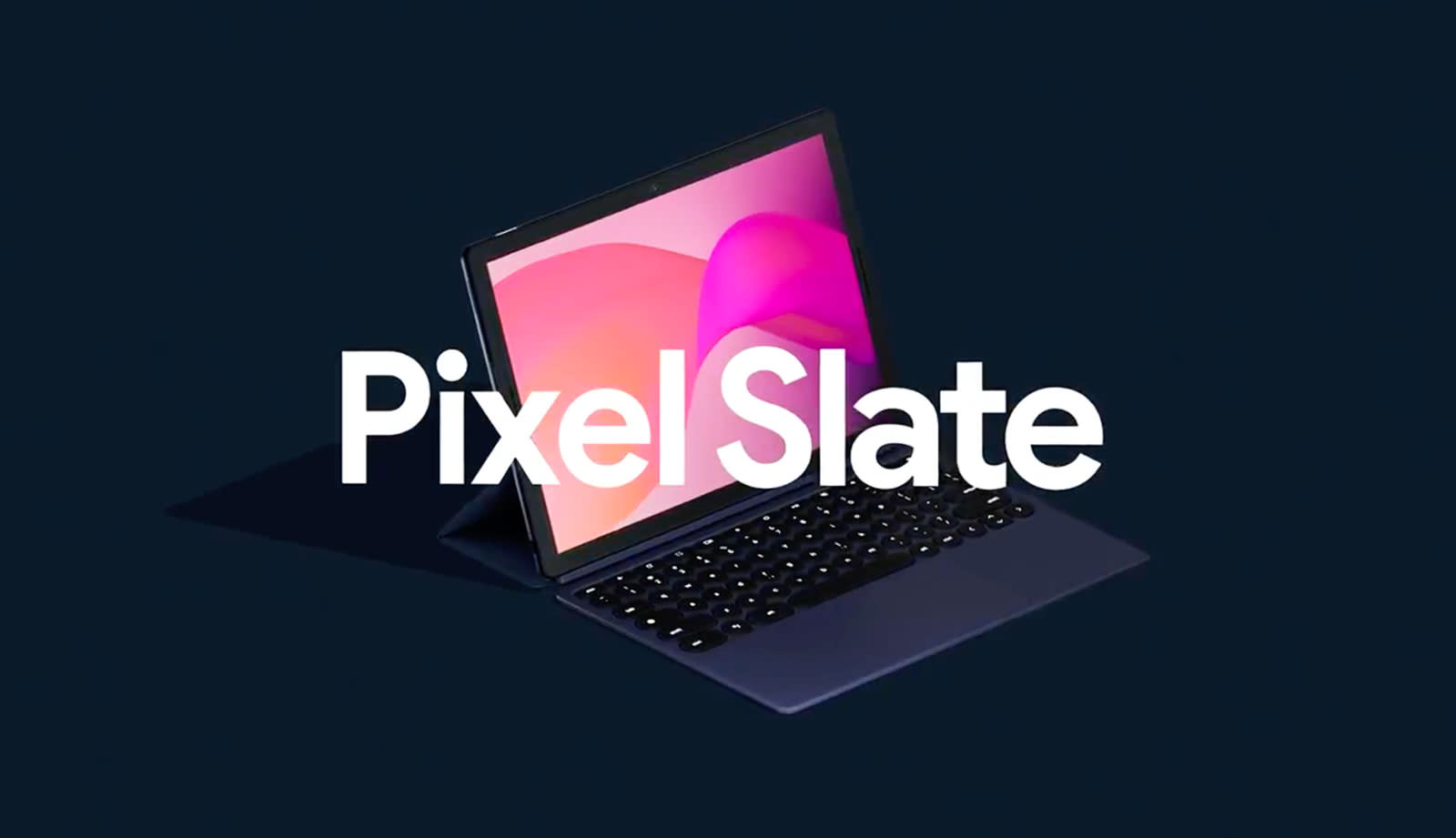 Looks like the leaks were right after all. In addition to announcing new flagship phones today, Google took the wraps off a new premium tablet called the Pixel Slate. It's a Chrome OS-powered slate with a 12.3-inch display that's supposed to be the sharpest in its class. Google claims this isn't just a laptop pretending to be a tablet or a phone pretending to be a computer.

Google was able to make the screen so sharp because of an energy-efficient LCD technology called Low Temperature PolySilicon (LTPS), which let the company pack in more pixels without sacrificing size or battery. In fact, the Pixel Slate is supposed to last up to 12 hours on a charge, which is impressive for its skinny 7mm profile. And like Apple did with the iPhone Xr's LCD "Liquid Retina" screen, Google is calling this the Molecular Display. Sure. What stands out about the Pixel Slate is the version of Chrome OS it runs. When docked to a mouse or a keyboard accessory with a trackpad, it runs the regular desktop interface most people are familiar with by now. Disconnect peripherals, though, and it switches automatically to tablet mode, which is optimized for touch.

In this profile, the home screen features icons for installed apps, much like the app drawer on Android phones. You can split the screen between up to two apps or drag and drop browser tabs to place them side by side.

Other Android-like features in this mobile-friendly mode include Night Light to reduce the blue light emitting from the screen and Do Not Disturb to silence your notifications. You'll also find Assistant baked more deeply into this redesigned Chrome OS, and it's supposed to answer your questions more quickly than before.

The Pixel Slate will be available with an Intel Celeron or Core M3, i5 or i7 processor, and 4GB to 16GB of RAM at a starting price of $599. You'll have to shell out an extra $200 for the Google-made keyboard accessory, which looks like it uses strong magnets to prop the Slate up, similarly to the way it did with the Pixel C.

The folio comes with a trackpad, circular keys and a dedicated Assistant button, and it connects to the tablet via pogo pins, which should hopefully be more reliable than the Bluetooth connection on the Pixel C's keyboard.

And of course there's the Pixel Pen, which you use to scribble on the screen, take notes, et cetera... It's definitely a must have if you want to make the most of the Slate in tablet mode. But sadly Google is selling it separately for $99.

It looks like the world of 2-in-1s just got some strong competition from Google, but we'll have to put it through our battery of tests to see if it's worth the money. The company hasn't shared exactly when the Pixel Slate will be available, except that it should be ready later this year.

In this article: ChromeOs, gadgetry, gadgets, gear, google, googlepixelslate, mobile, pixel3event, pixelslate, tablet, tablets
All products recommended by Engadget are selected by our editorial team, independent of our parent company. Some of our stories include affiliate links. If you buy something through one of these links, we may earn an affiliate commission.