Google improves Assistant with a slew of home-friendly features

From merging with Nest to creating its own line of smart-home products, Google's spreading the word that it doesn't just belong in your phone or computer, but in your everyday life as well. Central to that experience is Google Assistant, the company's AI-powered voice helper that ties the whole ecosystem together. Today, Google is ready to unveil a whole new set of smart-home features for the Assistant -- everything from recommended recipes to Ninja Turtle alarms -- that the company hopes will make its ecosystem more compelling. All of these new features should be rolling out to Google Assistant in the coming weeks.

Google showed off the new features to select members of the press in a specially set up home in San Francisco, outfitted with several Google Home speakers and smart displays. As you might expect, the theme of the event was the upcoming holidays, and many of the new features were demonstrated with that in mind.

For example, Google is adding reply back functionality to broadcast, which is the ability to send a message to all of your home's smart speakers and smart displays with a single action. With reply back, however, those on the other end can finally respond to you.

Google demonstrated this with a spokesman pretending he was out and about with his phone. He broadcasted to the Google Home speaker, asking if his co-worker needed anything from the store. The co-worker responded, asking him to pick up some cranberry sauce on the way home (very theme-appropriate). The spokesperson then got a notification on his phone, which leads not only to a voice recording, but also the transcribed text. In the demo, Google used a smart display, which shows the name of the caller, but it will work with smart speakers too.

Perhaps my favorite new feature, however, is to do with cooking. One of my personal highlights of Google's Smart Display is its step-by-step recipe instructions, and Google wanted a chance to show them off more. Therefore, it's introducing Recommended Recipes, which you can access simply by swiping right on the home screen.

What's more, you can now save your favorite recipes for later in a personal cookbook and retrieve them with Google Assistant. Right now, this works only with recipes from content partners, but Google says it's working on letting you input your own recipes too. 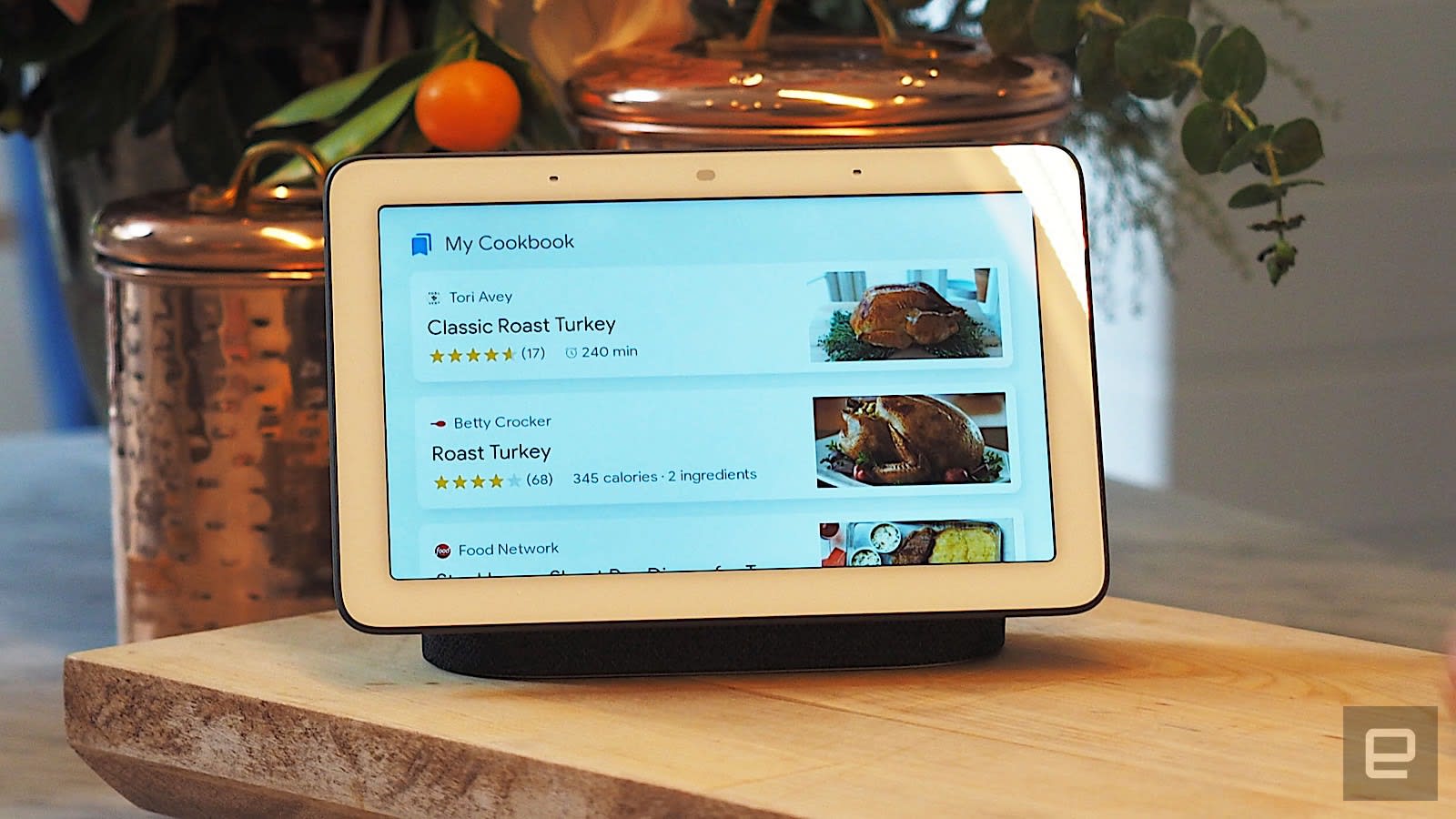 One more feature coming to Google's smart-home lineup is the ability to adjust playback speed of your favorite podcasts and audiobooks, which you can enable by saying "Hey Google, play at twice the speed," for example. Unfortunately, this appears to work only with Google Podcasts and Google's own audiobooks right now.

Moving on to family entertainment, Google is also introducing more kid-friendly content. Thanks to a partnership with Nickelodeon, it's adding a set of alarms from Nickelodeon's Rise of the Teenage Mutant Ninja Turtles. It'll not only wake your little (or not so little) ones with the signature theme song, but you can even set the voice of either Leonardo, Michelangelo, Raphael, Donatello or April O'Neill (No Splinter, unfortunately) to offer up jokes and words of wisdom. To activate it, just say "Hey Google, set a Ninja Turtle alarm for 4PM," for example, and then pick your favorite character. Other alarms include characters from Lego City, Lego Life and Lego Friends, with more from Spin Master's Hatchimals coming later this year. I'm obviously not a kid, but I did think the feature was fun during the demonstrations.

Just a few weeks ago, Google announced it was partnering with Disney to bring storybooks to life with a new "read along" feature that adds sound effects and music while reading a book to your child. To add to that, Google is announcing that it's introducing its very own children's book entitled Ara the Star Engineer, which was written by a Google employee.

If you need a little more, Google is adding 25 family-friendly storytime titles that don't require you to have a book at all. Those stories are a result of that aforementioned Nickelodeon partnership and include titles from properties such as Dora the Explorer, PAW Patrol and more.

To end it all, Google brought us into the bedroom for a couple nighttime features. One of them is the ability to activate silent or do-not-disturb mode on your phone with Google Assistant, (either via your phone or a Google-powered smart speaker or display). Just say "Hey, Google, silence my phone" to do that. Google demonstrated this feature with a Home Hub, which also showed the names of the phones on the screen. Right now, this feature only appears to work with Pixels, but Google says it's working to bring that functionality to all Android phones.

Google is also introducing a new type of alarm. When the Android update arrives, you'll see a setting for "Google Assistant Routines" in the alarms section of the clock app. When enabled, this will set into motion a series of actions when you dismiss the alarm. In our demo, after the spokesman shut the alarm off, Google Assistant told him the weather and turned on the nearby coffee maker.

With all of these improvements, Google is clearly going after the likes of Amazon, which had a pretty good head start in the smart-home space thanks to Echo and Alexa. Google, however, has countered in recent years with its own line of Echo rivals, partnerships with several third-party manufacturers and, most importantly, the increasingly-intelligent Google Assistant. Google may not have won the smart-home wars just yet, but thanks to its ubiquity in everyday devices, it's definitely leveling the playing field.

All products recommended by Engadget are selected by our editorial team, independent of our parent company. Some of our stories include affiliate links. If you buy something through one of these links, we may earn an affiliate commission. All prices are correct at the time of publishing.
View All Comments
Google improves Assistant with a slew of home-friendly features
gear
google
googleassistant
home
mobile