The company blamed the error on a "miscommunication."

OnePlus was thrust into the limelight earlier this week when CEO Pete Lau announced on-stage that one of its 2019 flagship phones would be the first device to launch with Qualcomm's Snapdragon 855 chipset. As it turns out, what seemed like a major coup for the upstart hardware maker was actually a huge mistake.

Chinese versions of the slide deck Pete Lau used to make the announcement at Qualcomm's Tech Summit in Hawaii said that the phone in question would be "among the first" smartphones to use the 855 — the problem is, the slides used for the presentation in Hawaii definitively said it would be the first. Needless to say, that's a serious blunder for a company enjoying a moment under the spotlight, not to mention a disappointment to the many fans who took that slide at face value.

A OnePlus spokesperson confirmed the mistake to Engadget, and said that the person who wrote the slide was not a native English speaker. As a result, our original report was mistaken (we've since updated the story), but the issues here run deep. On multiple occasions on Wednesday — including in an interview conducted with CEO Pete Lau — OnePlus spokespeople confirmed to Engadget that its phone would indeed be the first device with a Snapdragon 855 chipset. It wasn't until we informed the company of the discrepancy between its different slide decks that any of its employees even noticed the problem.

"We appreciate the opportunity to clarify that we will be one of the first to have access to, and use, the Qualcomm Snapdragon 855, and apologise for the miscommunication," a spokesperson said in a statement.

The confusion appears to center around the use of the word "feature" — some inside the company apparently believed that by saying the phone in question would be the "first to feature" the 855, it was actually saying that the company was the first to get access to the chipset from Qualcomm. While that may be true, the language used in the slide presented to an international audience of journalists clearly suggested otherwise. The confusion ran so deep that members of the OnePlus social media team trumpeted the announcement on Twitter, apparently unaware of the miscommunication. 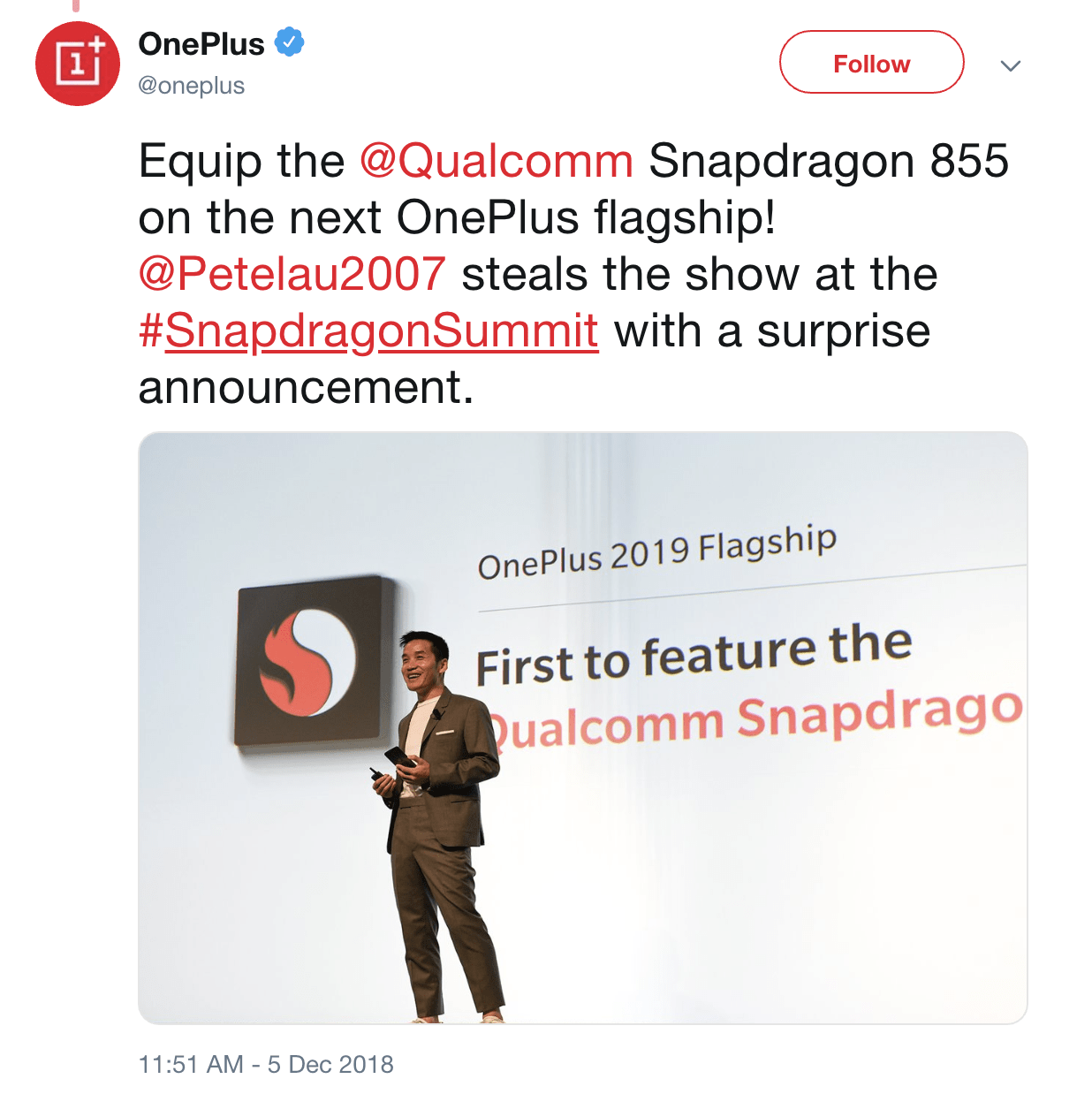 At least Qualcomm doesn't appear to be concerned about the mistake. When asked for comment, a spokesperson told Engadget that "it's not on us to claim which partner is going to be first to do anything." Even with that being the case, the very public nature of the error also calls into question OnePlus's overall maturity as a company.

OnePlus shipped its first smartphone in 2014, and has succeeded in growing a devoted base of users around the world, but the progress hasn't come without its perils: The credit card details of up to 40,000 OnePlus users were intercepted between November 2017 and January 2018, and before that, the company inadvertently left a backdoor open in certain devices that allowed root access to the device without having to unlock its bootloader first. And less than a month before that, the company drew the ire of users and privacy advocates when it was revealed that OnePlus devices relayed personally identifiable device information to the company without specific user permission.

OnePlus's on-stage mistake is one of the company's more public (and likely most embarrassing) errors, but it's only one of a handful of notable missteps made in the past two years. As OnePlus's profile continues to rise, we can only hope that it more consistently tries to address issues like these (and others) before they begin to seriously impact the company's business.

All products recommended by Engadget are selected by our editorial team, independent of our parent company. Some of our stories include affiliate links. If you buy something through one of these links, we may earn an affiliate commission. All prices are correct at the time of publishing.
On-stage mistake means OnePlus won't have the first Snapdragon 855 phone
gear
mobile
oneplus
qualcomm
snapdragon
snapdragon855