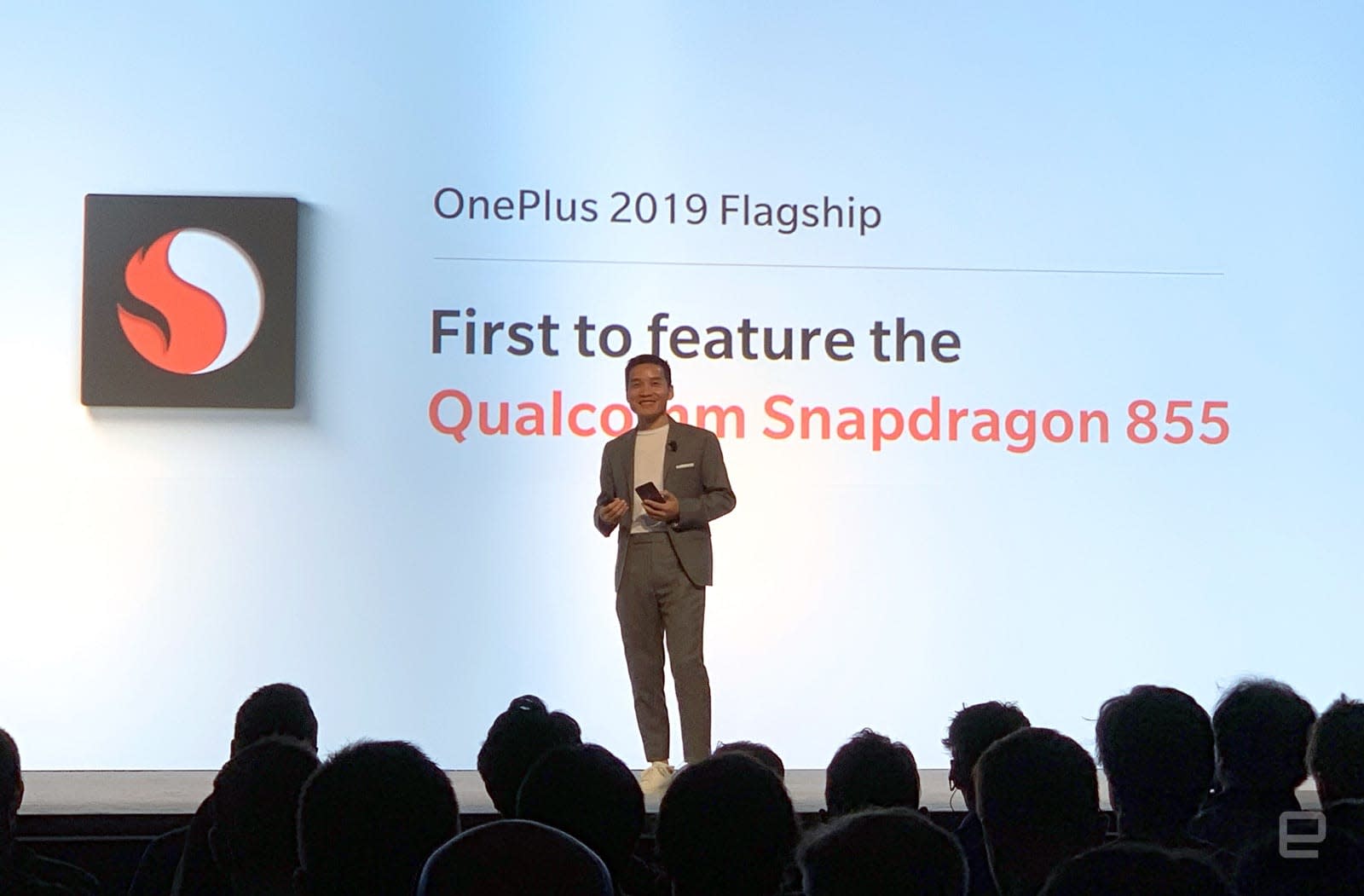 OnePlus's flagship 6T smartphone isn't even all that old yet, but CEO Pete Lau just gave everyone a big reason to hold off on upgrading. In remarks delivered in Qualcomm's Tech Summit in Hawaii, Lau said that an upcoming 2019 flagship will be the first smartphone one of the first smartphones to use the new Snapdragon 855 chipset and that, with help from UK-based carrier EE, it would also be Europe's first 5G phone.

We've previously heard that OnePlus had access to the Snapdragon 855 before any other smartphone maker, and today's news bears that out. The thing is, we all expected the next OnePlus phone to use Qualcomm's latest chipset -- the company exclusively makes affordable flagship-level devices -- but we didn't actually expect OnePlus to deliver an 855 device first. That's a pretty big coup for a company that released its first device only four years ago. Interestingly, it also seems likely that this 5G-enabled OnePlus be part of a separate product line; in other words, this future device might not officially be the OnePlus 7.

Also interesting is the fact that OnePlus was given the responsibility for building Europe's first 5G device. When it came to build the first round of 5G smartphones for the United States, Verizon and AT&T leaned on Samsung, probably because of the company's strong background in 5G research and its long business relationships with both carriers. OnePlus doesn't have the same legacy, but it has been talking up its own work in 5G over the past few months: the company mentioning on Twitter that it had made phone calls and tweeted over those high-speed data connections.

The rough timing of OnePlus's intended European launch isn't exactly a surprise — Qualcomm president Cristiano Amon pointed out in his day one keynote address that wireless industry as a whole was moving "at the same pace for 2019 launches" for 5G. Even so, the message here is clear: 5G is coming, and Qualcomm wants to get as many partners and users on board as quickly as possible.

Update 12/6/18 4:57AM ET: Due to an internal miscommunication, OnePlus actually meant its 2019 flagship will be one of the first smartphones -- instead of being the very first -- to pack a Snapdragon 855 chipset. This article has been updated to reflect this correction.

In this article: 5g, europe, gear, mobile, oneplus, qualcomm
All products recommended by Engadget are selected by our editorial team, independent of our parent company. Some of our stories include affiliate links. If you buy something through one of these links, we may earn an affiliate commission.