The insane brakes you didn’t know you needed are here.

I'm driving up the Northern California coastline when a very happy, very overweight yellow dog runs into the road. Hours earlier a Porsche spokesperson had explained how well the new Porsche Surface Coated Brakes (PSCB) work, adding they would take a little time to get used to. This real-world canine test brings the SUV to a quick stop without much effort on my part. I would have been able to stop in time even with the regular Cayenne brakes. But sometimes it takes real life to show just how helpful new technology is.

In addition to impressive stopping power, the new Cayenne (starting at $65,700) is infused with technology borrowed from the 911. It's a reminder that, at its core, the automaker is still a sportscar company. The Cayenne now has rear-axle steering and staggered wheels. (The rear tires have a wider stance than the front ones.) Both of those originated on the 911 and the result is sporty SUV that doesn't skimp on performance or luxury.

The 2019 Cayenne comes with a turbocharged, 3.0-liter V6 engine that pushes the SUV with 335 horsepower and 332 foot-pounds of torque. It's brisk off the line with a zero to 60 time of 5.9 seconds. (That's 1.6 seconds faster than the previous-generation Cayenne.) It has plenty of power to spare when you need to pass on the highway or when you're stuck behind tourists staring at the vineyards in Northern California (they're just plants, guys).

For an SUV, the Cayenne handles impressively well. The vehicle plowed through the back-road switchbacks of Northern California with aplomb. In those sharp turns, the rear-axle steering made me feel like I was driving a much smaller vehicle. This is especially helpful in parking lots where a tight turning radius can mean the difference between pulling into a spot in one motion and having to resort to putting the Cayenne in reverse a few times to make it fit. 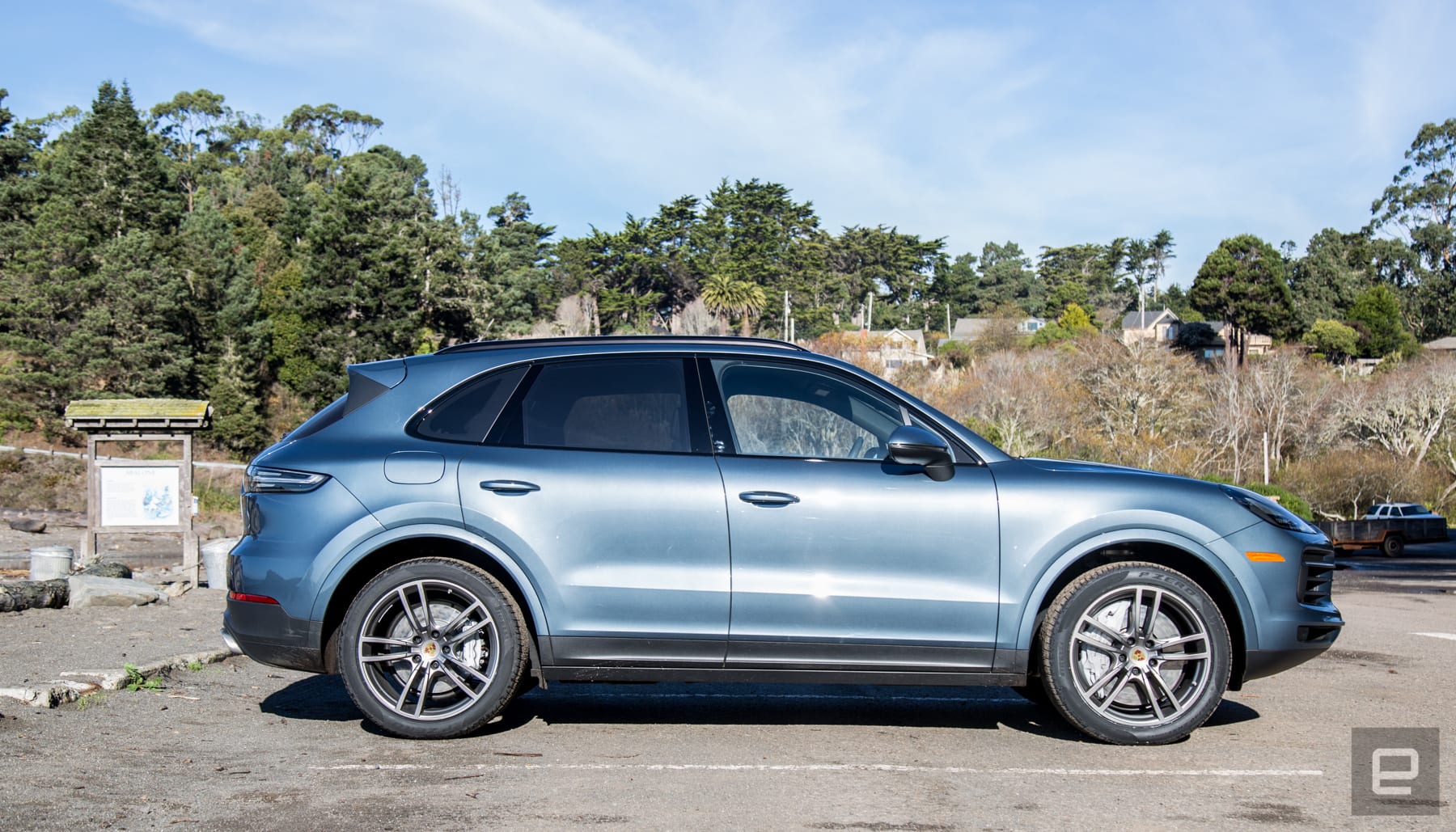 But all that tech and high-speed handling do nothing to diminish the Cayenne's smooth ride. Whoever owns this will likely spend the majority of their time on surface streets and highways, going to and from work, school, shopping or having a night out on the town. The vehicle provides a pleasant ride in almost every scenario.

While feeling pampered is wonderful, it's also important to think about safety. Which brings us back to those dog-saving brakes. The PSCB system is impressive in its stopping power and, according to Porsche, its ability to reduce brake dust by 90 percent. At high speeds, it's amazing how quickly you can stop. But if you take it into town, they can be touchy. There's definitely an adjustment period where you tap the brake too hard and you lurch forward in the driver's seat. That $3,490 upgrade price for the brakes will also give people some pause, especially since the standard brakes are more than adequate for most people.

Regardless of the braking system, the interior matches the vehicle's ride: It's plush, while still meeting the needs of the driver. Like the Panamera, many of the car's functions are laid out near the shift lever. All those light-up buttons offer quick access to a majority of the features people use, but it comes very close to being overkill. It's not there yet, but it's about two buttons away.

Meanwhile, the Porsche Connect Plus infotainment system continues to be surprisingly robust with the ability to customize home pages to your liking. The 12.3-inch screen is bright, easy to read and never looked washed out under direct sunlight. The system supports CarPlay but sadly not Android Auto. 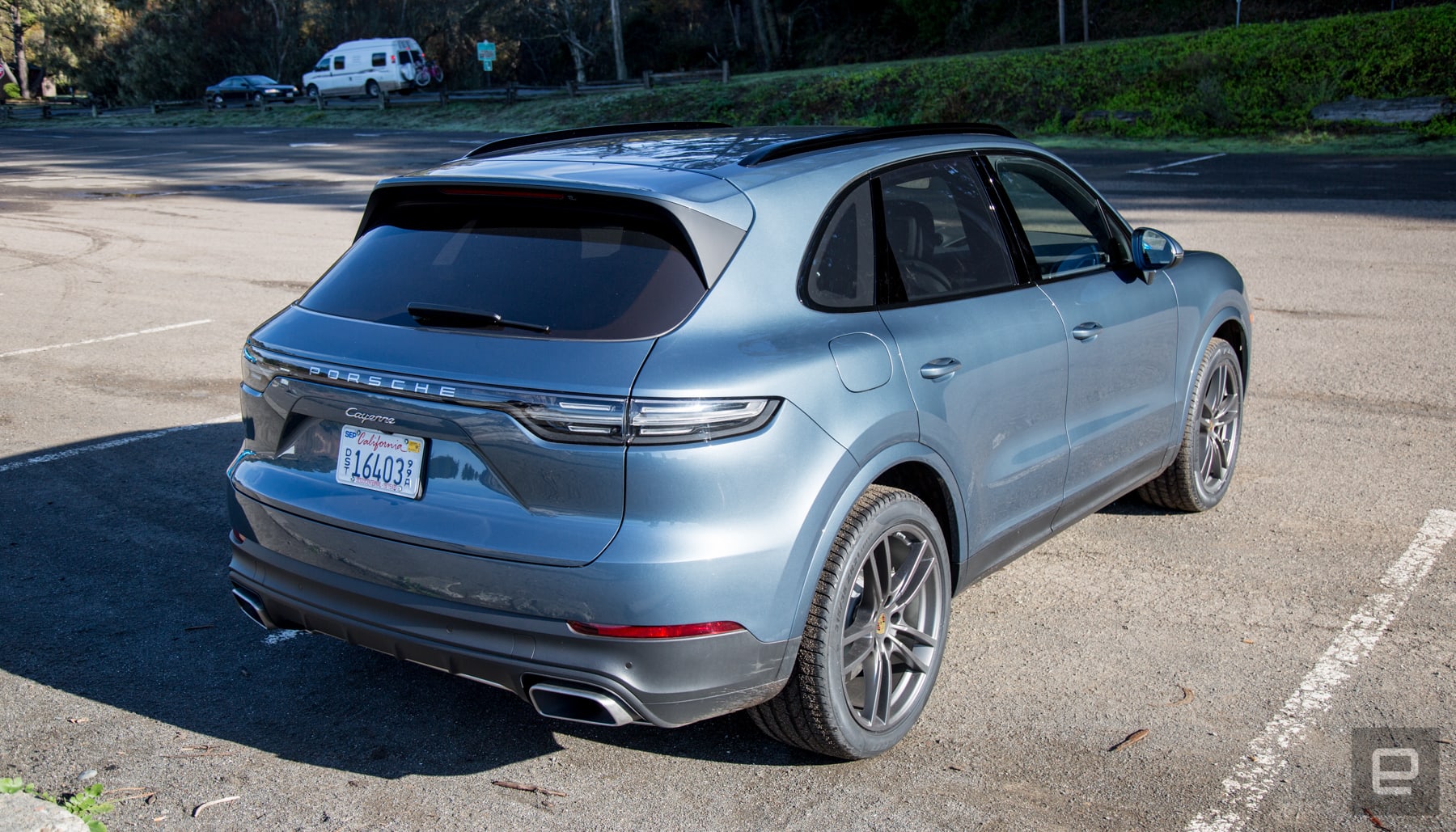 With the Cayenne, Porsche took what was already working in their 14-year-old SUV and added a mix of features people will likely expect, and also a few that give it a leg up on the competition. While the current vehicle is powered entirely by gasoline, a hybrid is coming sometime next year. If it's anything like the Panamera 4 E-Hybrid Sport Turismo, it should further improve on the Cayenne formula. Do you need super grippy brakes? Probably not, but Porsche gives you the option to add to your offset tires and rear-axle steering. Because sure it's an SUV, but it's also a Porsche.

All products recommended by Engadget are selected by our editorial team, independent of our parent company. Some of our stories include affiliate links. If you buy something through one of these links, we may earn an affiliate commission. All prices are correct at the time of publishing.
View All Comments
Porsche's sports car tech improves the new Cayenne SUV