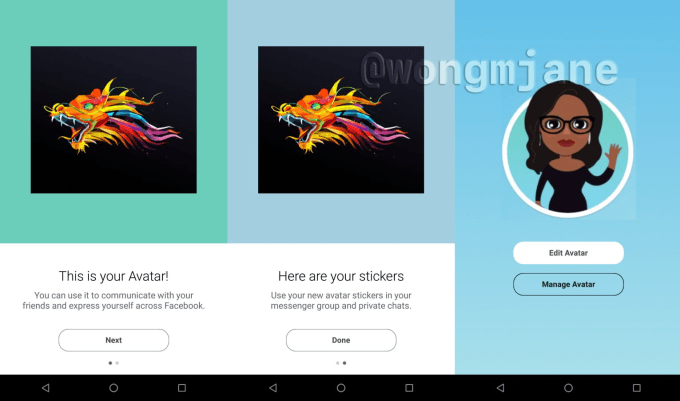 Mark Zuckerberg has repeatedly said that visual communication is replacing text, hence the arrival of Facbook Reactions in 2016, and GIF comments last year. Next on the agenda appears to be Facebook Avatars, which will let you build a personalized, illustrated version of yourself to use as a sticker in comments and Messenger.

The feature was found by developer Jane Manchun Wong, hidden in the code of Facebook's Android app. This means it's still in testing, but Jane's digging revealed that Facebook Avatars is basically Facebook's take on Snapchat's Bitmoji (no surprises there -- Facebook is a big fan of "borrowing" ideas from other platforms).

Facebook confirmed to TechCrunch that it's "looking into more ways to help people express themselves on Facebook", and that Avatars -- still in early development -- will be part of that. It's not yet clear exactly what these Avatars will look like, or how they'll work beyond stickers in comments. Will they be dynamic, with quickly changeable expressions? Will you build your Avatar from scratch, or will machine vision and AI get you started based on your photos? The latter isn't beyond the realms of possibility -- it's how Facebook Spaces VR avatars are created.

There's no denying personalized avatars are popular. Bitmoji's parent company Bitstrips started out as a comic strip creator back in 2008, but people mainly used the tool to create avatars which would then show up as Facebook profile pictures. Bitmoji -- acquired by Snapchat in 2016 -- is consistently in the top of app charts, sometimes even ahead of Snapchat and Facebook, so it's a surprise Facebook has waited so long to get in on the action. But in order to avoid simply being a clone of other offerings it'll have to take some time to make its own avatar feature something special.

Via: TechCrunch
Source: Jane Manchun Wong
In this article: AI, Avatar, Bitmoji, facebook, personalized, services, Snapchat, stickers, VR
All products recommended by Engadget are selected by our editorial team, independent of our parent company. Some of our stories include affiliate links. If you buy something through one of these links, we may earn an affiliate commission.