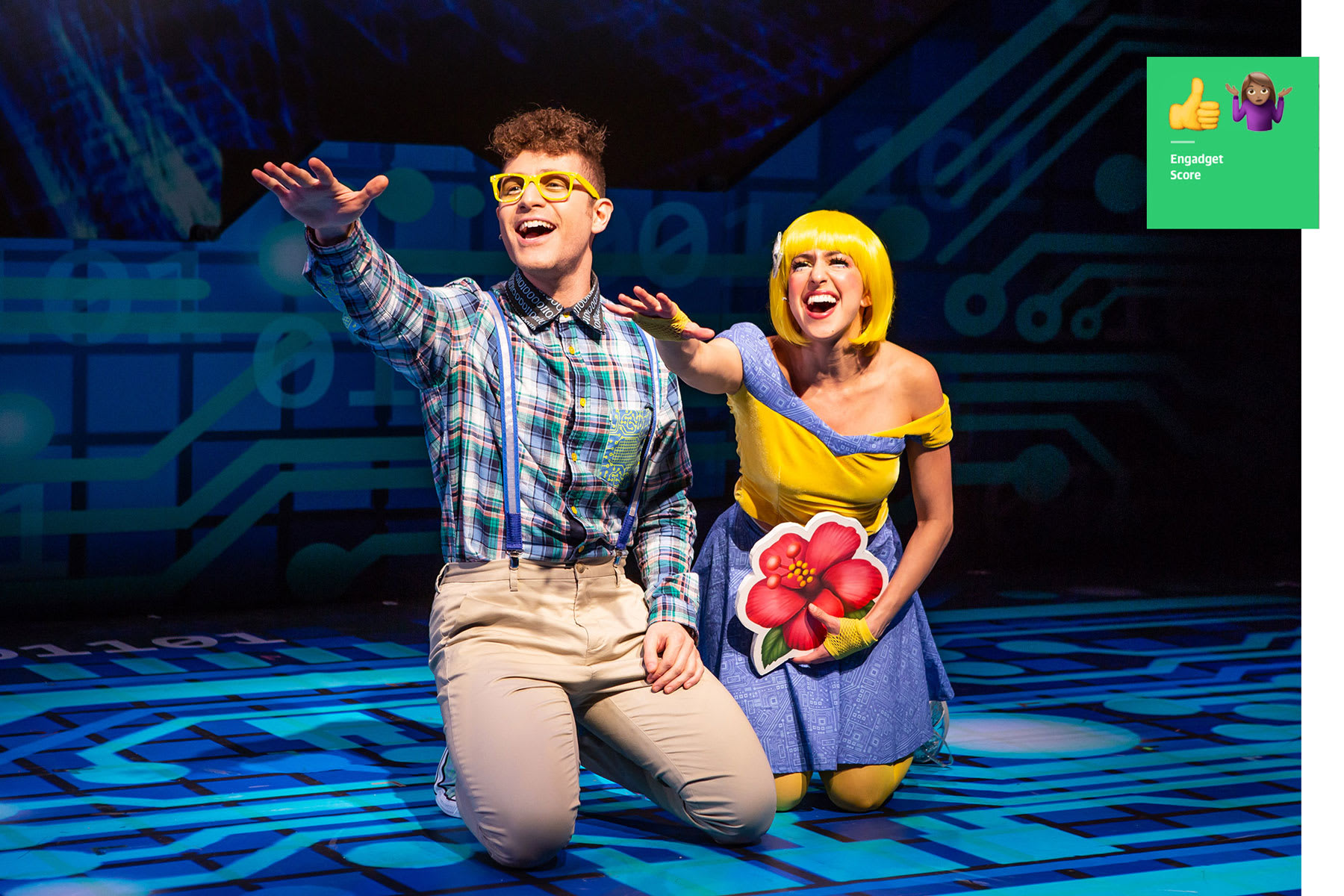 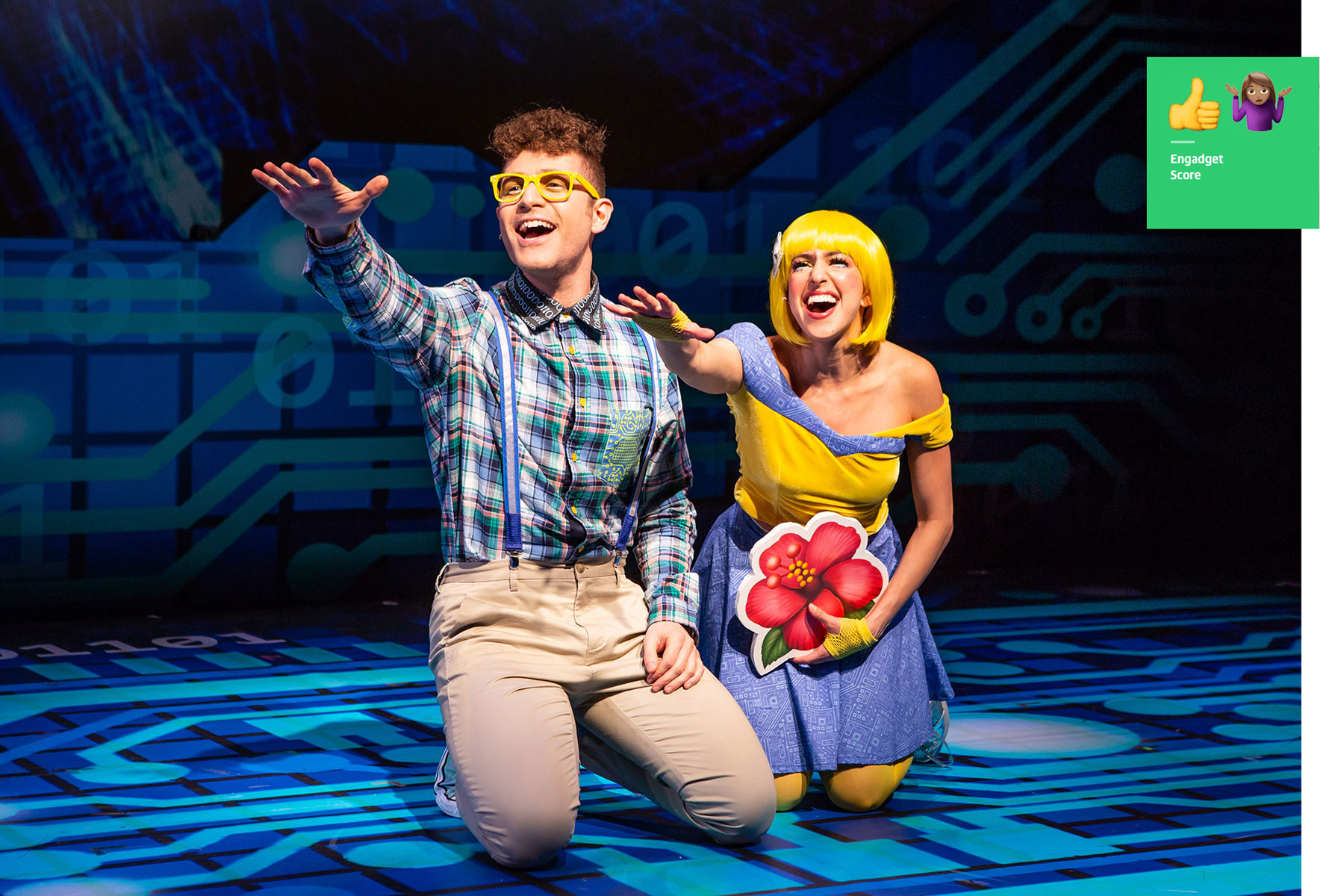 Spending two hours of my life watching emoji deal with existential crises isn't something I ever expected to do. That almost feels fitting considering that the show's creators, Keith and Laura Harrison, never expected they'd have the chance to stage their emoji musical off-Broadway. Emojiland runs through Sunday as part of the New York Musical Festival, and it endeavors to deal with weightier subjects than you might expect from a show in which a woman dressed as a 💩 brings the house down with a brassy, gospel-inspired number in a bathroom stall. But what is it like to actually sit through? Not bad, actually, as long as you're walking in with an open mind.

The narrative is, as you might expect, pretty thin. All is more or less well in this microcosmic kingdom until a software update arrives -- which obviously calls for a party at the Progress Bar -- bringing a handful of new emoji with it.

Packed with endearing characters and scene-stealing performances, Emojiland is a charming way to kill an evening off-Broadway. Just beware of the show's uneven pacing and scattershot character development -- it's been four years in the making, and the show still feels like it needs more focus.

The newcomers instantly give the cast a jolt of energy: The feckless, domineering Princess emoji (played with scene-stealing verve by Broadway vet Lesli Margherita) suddenly meets her match in a flamboyant Prince (Josh Lamon) who can belt just as well as she can. And Emojiland co-creator Keith Harrison soon appears as Nerd Face, the endearing, nasal pseudo-protagonist who quickly forms an emotional connection with the Smiling Face With Smiling Eyes emoji (also known as Smize) played by the show's other co-creator, Harrison's wife, Laura.

Given their years-long marriage, it's little surprise that the moments the Harrisons share onstage feel so substantial. Even though the circumstances of Nerd Face and Smize's meeting are somewhat trite, their affection embodies an earnest magnetism that's totally absent in the bond Smize shares with her douchebag boyfriend, Sunny. (You might know him better as 😎.) It's at this point that Emojiland reveals its true colors. Sure, you're there to see how emoji deal with a world-ending crisis in two hours, but it revels in fleshing out the relationships that the world is built around.

Especially affecting was the easy, natural romance between the female Police Officer emoji (Angela Wildflower) and female Construction Worker emoji (Megan Kane), which provided a satisfying contrast to the show's other love story. While Nerd Face and Smize spend the show sorting out their feelings for each other, PoPo and CoWo, as they refer to each other, have an established, caring relationship between two working women devoted to their careers and each other.

Theirs is the most mature and functional relationship in Emojiland, and the fact that the show portrays a gay, interracial love story without so much as batting an eye suggests Emojiland is in some ways more progressive than our own world. It makes the fact that the two later find their relationship strained by ideological differences over a wall -- well, a firewall -- that Prince and Princess want built all the more bittersweet. If nothing else, Emojiland is a show with a lot of heart.

That's not to say it's perfect -- uneven pacing and some rushed character development prevent the show from striking with maximum impact. Lots of time is spent sketching out the rough mythos of Emojiland, but our verbose friend Nerd Face doesn't show up until halfway through the first act. The main story is often shunted to the backburner in favor of fun musical asides that, while genuinely enjoyable, dampen the show's momentum. And Skull, a disaffected emoji with theatrical, almost emo tendencies, gets little attention despite being directly responsible for the mortal peril Emojiland soon faces.

Actually, I need to take a minute to talk about Skull, played with sultry self-importance by Jordon Bolden. He's not necessarily the most complex character in the show -- that honor arguably belongs to Harrison's Smize, with her undercurrent of existential anguish. Still, Skull is the one that most directly grapples with the absurdity of his world, and as the embodiment of death, he occupies a singularly driven role. He's brooding, self-obsessed and ultimately over everything, including himself.

Skull's raison d'être is to not have a raison d'être at all, and in Nerd Face he sees an inquisitive soul with the insight and resourcefulness needed to help him die -- sorry, I mean "be deleted." Once Nerd Face's research yields a virus that can delete not only Skull but also everyone, however, Skull all too quickly turns the corner. Within moments, he goes from disaffected loner to engineer of emoji-nocide. That deep-rooted nihilism at times felt too heavy in a world largely characterized by humor and big personalities. I can forgive that, mostly. As nuanced as the emoji the Harrisons envisioned were, they were still bound by the archetypes of their design. Of course Skull was going to be gloomy to a fault.

In an interview prior to the show's premiere, though, the Harrisons told me Skull was meant on some level to embody the dark drives that manifest all too readily in a certain generation of angry young people, for whom a dissatisfaction with the world around them can lead to tragic consequences. Knowing that, Skull and his connection with Nerd Face needed much more time to percolate onstage, to reveal its layers and to make Skull's eventual desire to erase all life in Emojiland more meaningful than the plot-mandated twist it actually was.

The upside to this is that just about every one of the show's 12 cast members gets a moment to shine, be it in a big number or a scene-stealing deletion or a moment of pained selflessness. This egalitarianism isn't necessarily ideal though: Honing in on some of the show's more crucial relationships would've given it a more meaningful sense of focus and direction.

I don't know how harshly I can judge the Harrisons for these shortcomings: This is the first time the show has ever been fully staged like this, and as a producer later told me over a beer, the co-creators had been poking and tweaking the script basically until the moment they took the stage. Even after four years in development, Emojiland is still very much a work in progress.

That feels most apparent when Nerd Face and Skull are eventually reunited on the far side of a cataclysm. I won't spoil the climax for you, but it lands with an unsatisfying thud late in the second act and left me wondering about the point of everything I had seen before that. Then again, this is a show about emoji, and one that openly winks at its own significance -- or lack thereof. Maybe that was the whole point.

All told, Emojiland isn't the hardest-hitting musical you'll ever see, and its considerable strengths aren't evenly distributed. What it is, however, is a surprisingly fun way to spend an evening. For a show dedicated to the trials of glyphs inside a phone, I don't know that anyone could've expected more than that.

In this article: art, emoji, emojiland, emojimovie, entertainment, existentialism, musical, review, theater, unicode
All products recommended by Engadget are selected by our editorial team, independent of our parent company. Some of our stories include affiliate links. If you buy something through one of these links, we may earn an affiliate commission.