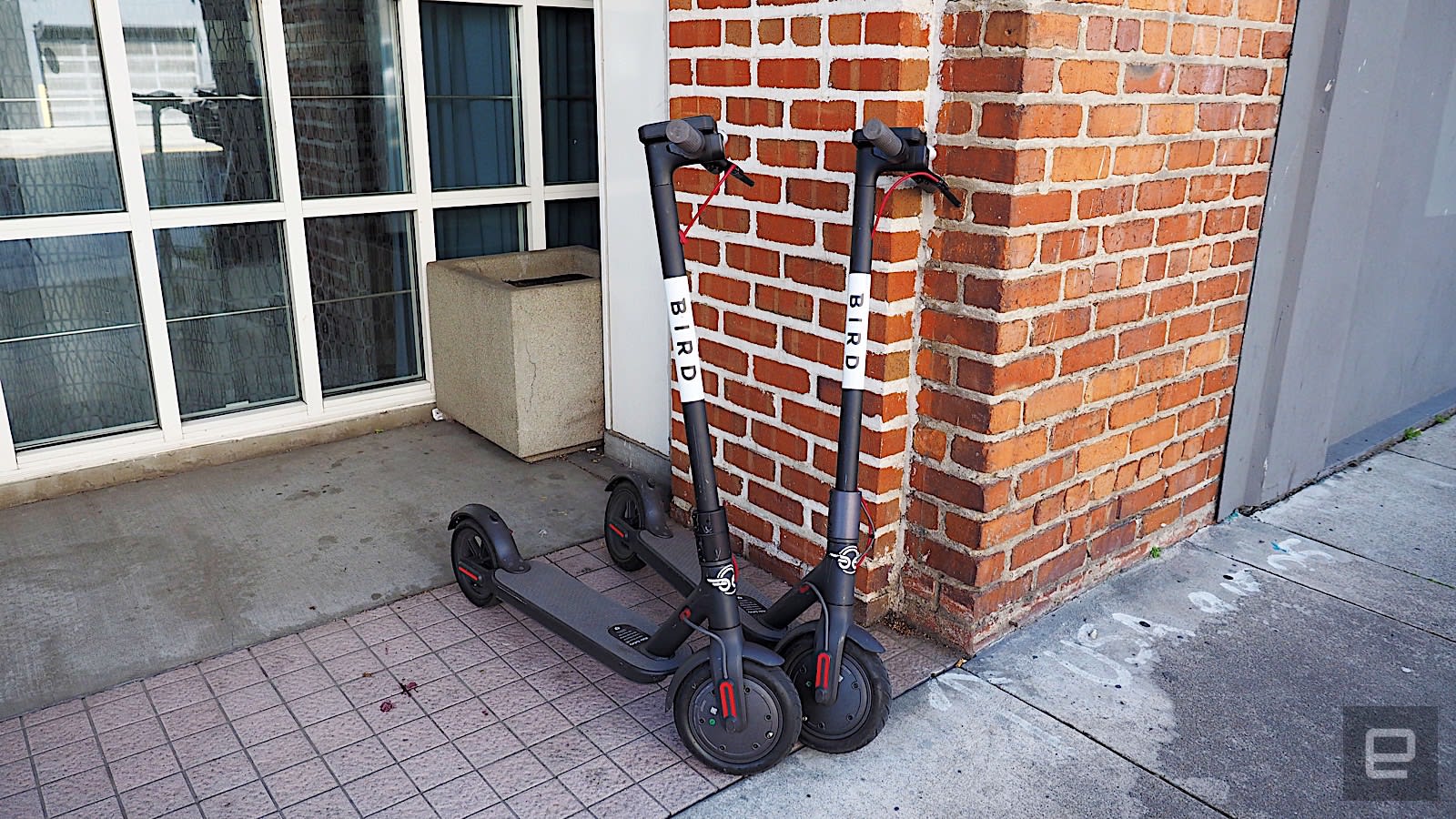 After months of deliberation, San Francisco's Municipal Transportation Agency has finally awarded scooter permits to two companies, and not to the ones you might expect. While Bird, Lime and Spin were the first to roll into the city earlier this year, their applications for scooter permits were denied. Permit applications from other big players like Uber and Lyft were denied as well. The only companies to have been awarded permits for a one-year powered scooter pilot program are Skip and Scoot, which are relatively smaller in size.

The city's relationship with these electric scooters have been quite a contentious one. When Bird, LimeBike and Spin debuted in San Francisco a few months ago, many residents complained that users left them lying around carelessly, obstructing pedestrian paths and walkways. Users of these scooters were also using them on sidewalks without helmets, which is both dangerous and illegal. One particular point of contention is that these companies did not provide the city of San Francisco sufficient notice that they were going to start rolling their scooters out en masse. Some have accused them of asking for forgiveness, rather than asking for permission.

As a result of citizen feedback -- SFMTA reportedly received nearly 1,900 complaints regarding scooters in less than a month -- the city passed a law on April 24, 2018 that required all scooter companies to have a permit in order to operate in San Francisco. Bird, Lime and Spin removed their scooters in compliance with the law.

Hard work and good communication pays off! Thank you to @sfmta_muni for awarding Scoot a permit to operate kick scooters in San Francisco! https://t.co/pPafeaOfi0 pic.twitter.com/FP4XOqrh0h

The city then created an official permitting process in late May, with a submission deadline of June 7th, for a one-year scooter pilot program. The program has several requirements, such as a reminder for customers to wear helmets and to not obstruct the public right-of-way, and to also provide a plan for low-income users. No more than five companies would be allowed to operate within the pilot period, and they would have to pay the SFMTA $5,000 to apply, $25,000 a year to maintain their permits, and $10,000 into a fund to cover city costs related to property repair and maintenance.

12 companies applied for these scooter permits. They are Lyft, Bird, Spin, Lime, Scoot, Skip, Hopr, Jump (Uber is the parent company), Ofo, Razor, Ridecell and Uscooter. According to the SFMTA, though no one application was perfect, Scoot and Skip put forward the strongest applications out of all 12. Skip is a relatively new company created by the founder of the Boosted Board skateboards, and has so far only deployed in cities where it's received permission. Scoot, on the other hand, has been operating full-sized scooters in San Francisco for almost six years, and has a long, well-established relationship with city officials.

"Taken as a whole, their applications demonstrated not only a commitment to meet the terms of the permit, but a high level of capability to operating a safe, equitable and accountable scooter share service," said the SFMTA in a statement. 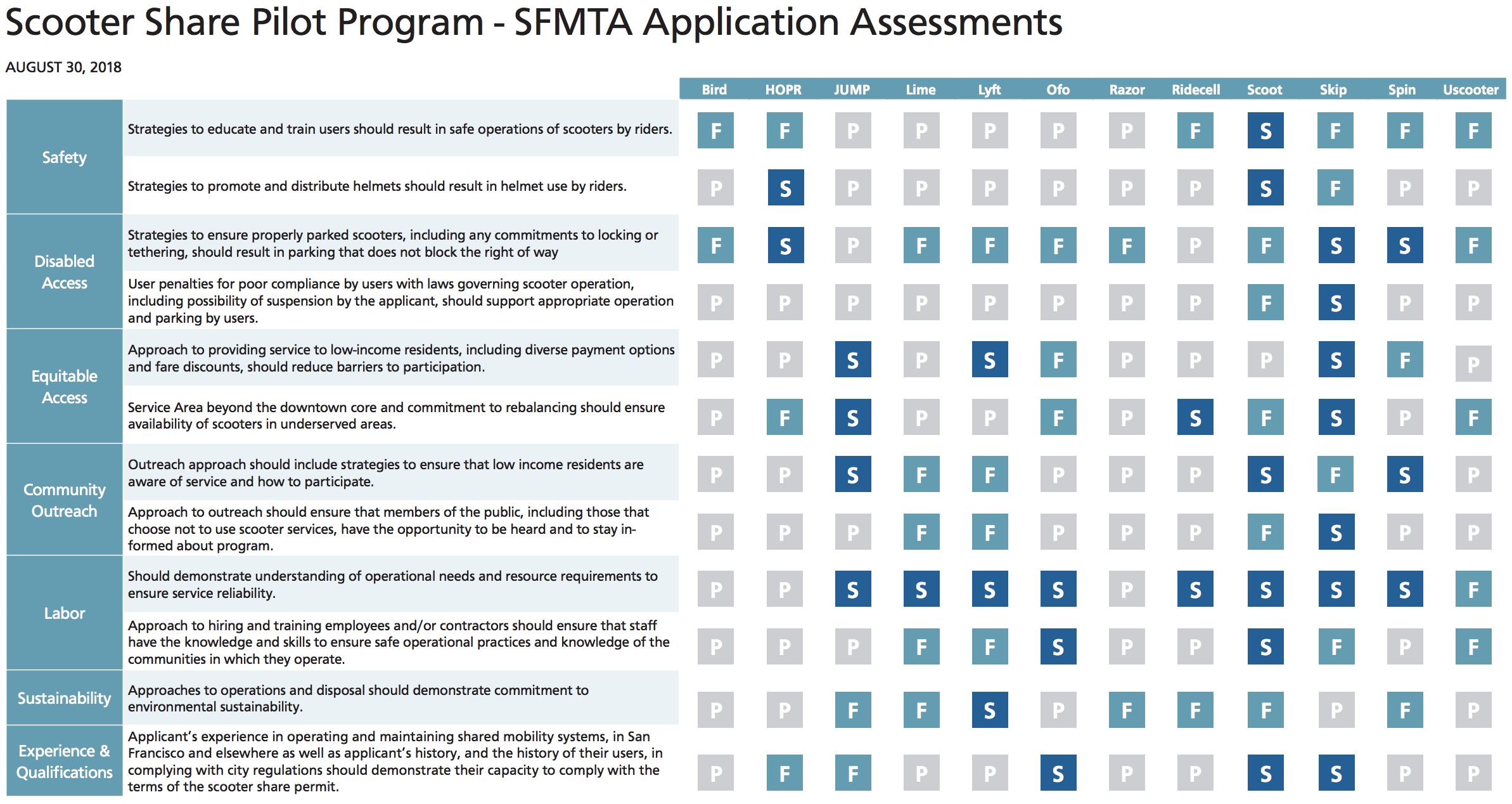 S is Strong, F is Fair, P is Poor. Click to embiggen.

The SFMTA has provided evaluation summaries of all the company applications on its website. Bird fared very poorly, and though Lime and Spin received better assessments, they still weren't quite good enough. When it came to helmet requirements, for example, Bird said it would provide a free helmet upon request and that field staff encourages helmet use, which SFMTA said was insufficient. Scoot, on the other hand, would incorporate a lockbox to provide a helmet with the rental, as well as offer free helmet giveaways. SFMTA said providing a helmet with the scooter is the "surest way to ensure consistent helmet use." Interestingly, even though Jump (whose parent company is Uber) has an existing bike sharing permit in San Francisco, it was denied a scooter permit.

The permits will be issued to Scoot and Skip on October 15th, which will in turn allow each company to release 625 scooters for the first six months. SFMTA might allow the two companies to increase the number of scooters to 2,500 in the future.

Source: SFMTA
In this article: bird, gear, lime, lyft, scoot, scooters, skip, transportation, uber
All products recommended by Engadget are selected by our editorial team, independent of our parent company. Some of our stories include affiliate links. If you buy something through one of these links, we may earn an affiliate commission.