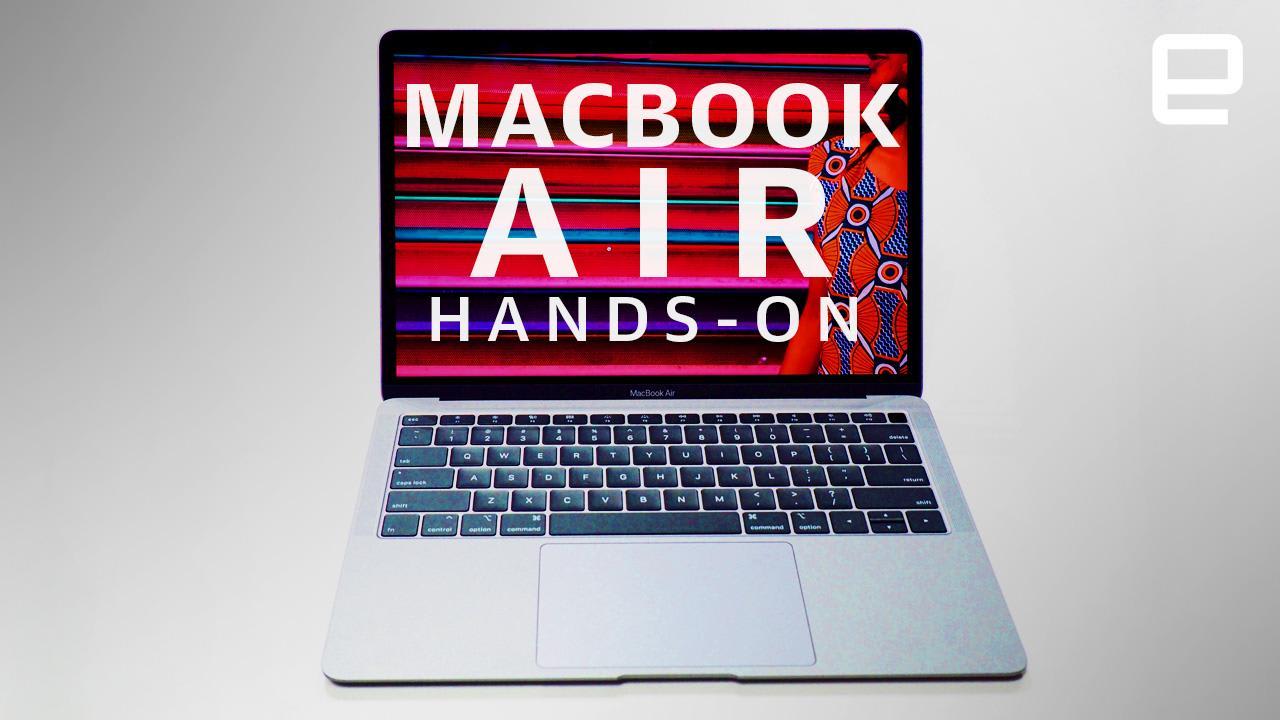 Finally. Here at a Mac-and-iPad event in Brooklyn, Apple just unveiled the long-overdue successor to the 13-inch MacBook Air, with upgrades that include a lighter and more compact design; a Retina display; faster performance; louder, bassier audio; and a new (but not necessarily improved) keyboard. As you'd expect, the company has a demo area set up at the venue, so I made my way up to a test machine to get some hands-on time. Before you guys slide into my mentions, an acknowledgment: This might not necessarily be the MacBook Air you all wanted, but it is the one that most of us predicted Apple would one day make. The new Air is basically a mash-up between the 12-inch MacBook and the larger MacBook Pros: It's constructed from smooth aluminum and is available in three colors. It's closer in size to the MacBook and even looks the same at a glance, but the addition of Touch ID and that extra Thunderbolt 3 port feel reminiscent of the higher-end Pro line.

Though the Air is not as light as the MacBook -- it weighs 2.75 pounds, compared with about two for the smaller edition -- both machines feel lightweight and easy to hold in one hand. And yes, the new machine is noticeably lighter than the older Air, which I'm using to write this story.

Both the Air and its 12-inch cousin have Retina displays that extend nearly edge to edge, with thin, perfunctory bezels at the edges. The screen is indeed sharp, and I enjoyed zooming in on photos to examine the details. (Find a few examples of this in the gallery above.) The colors are vibrant, too, with a color gamut that's been expanded by 48 percent over the previous generation. That said, if you were expecting the P3 color gamut that Apple implemented on some of its other Macs, you'll be disappointed. This is the sRGB color spectrum, a far more common spec in laptops in this size and price range.

I'll add that the glossy LCD display is no more immune to screen glare than others in its class. With a movie playing, I tried dipping the screen forward as well as watching from the side, as if I were crowded around for some group viewing. The color fidelity remained decent, but depending on your ambient lighting, reflections could be an issue. In my case, I found myself in a brightly lit demo area with some harsh, unforgiving lighting. In your dimly lit living room, your mileage might vary.

The keyboard is a familiar affair as well, featuring the same third-gen Butterfly design you'll find on the most recent MacBook Pros. (The 12-inch MacBook is still on gen two.) I type this wistfully from my work machine, a MacBook Air with pillowy keys, which I will miss dearly. As I've said in all of my recent MacBook and MacBook Pro reviews: The flat Butterfly design is usable, but I can't imagine it's anyone's favorite. Almost immediately into my hands-on demo, I made a typo -- on my own name, you guys. This is a keyboard you will learn to use, though I can't promise you will learn to love it. 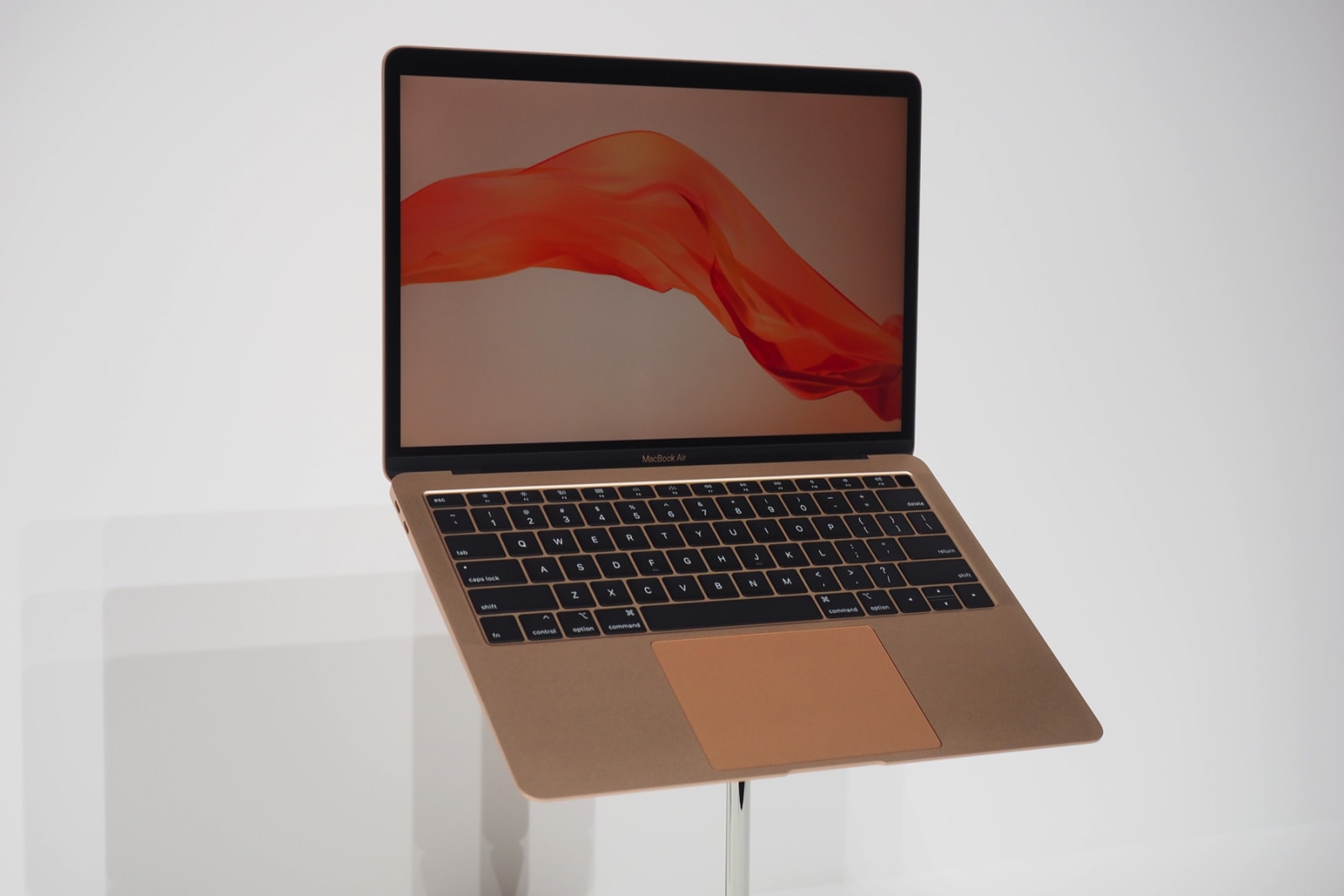 Also new is the audio setup, with Apple promising 25 percent higher speaker volume and twice the bass. It was awfully difficult to assess the bass in this hands-on area, with a competing soundtrack blaring through nearby speakers, but the volume -- now, that I could test. I was able to hear both Ready Player One and The Greatest Showman over that ambient music and people chattering at the neighboring demo stations. I wouldn't say I heard these movies well, but the fact that I was able to hear them at all feels notable, given the circumstances: This was one measly laptop competing against cavernous ceilings, a lively crowd and who-knows-how-many floor speakers.

I left the MacBook demo area with two conclusions. One, I will probably buy one. I have been waiting for a new MacBook Air, or equivalent thereof, and this is it.

Second, I'm having trouble understanding who would buy the 12-inch MacBook instead. They're similar in price, with the Air starting at $1,199 and the 12-inch MacBook at $1,299. The Air is heavier but still lightweight. In exchange for that heft, you get an extra port and a Touch ID sensor, which, unlike on the MacBook Pro, comes standard. The Air has a more powerful processor -- an eighth-gen Intel Core i5 processor to start as opposed to a lower-powered M-series chip. The 12-inch MacBook does start with 256GB of storage, compared with 128GB for the Air. That's fixable (with money) and probably not a dealbreaker for everyone anyway.

I know which machine I would buy. I would rather have the fingerprint sensor, faster processor, extra screen real estate and second port. This machine isn't the lightest in Apple's lineup, but it's light enough.

The MacBook Air is up for pre-order today, with shipments beginning next week, on November 7th. We hope to publish a full review by then, one that will examine how the Air stacks up against the competition. We'll also use that time to do a deeper dive on performance and, of course, battery life. Stay tuned.

In this article: apple, gear, hands-on, macbookair, macbookair2018, macevent2018, personal computing, personalcomputing
All products recommended by Engadget are selected by our editorial team, independent of our parent company. Some of our stories include affiliate links. If you buy something through one of these links, we may earn an affiliate commission.