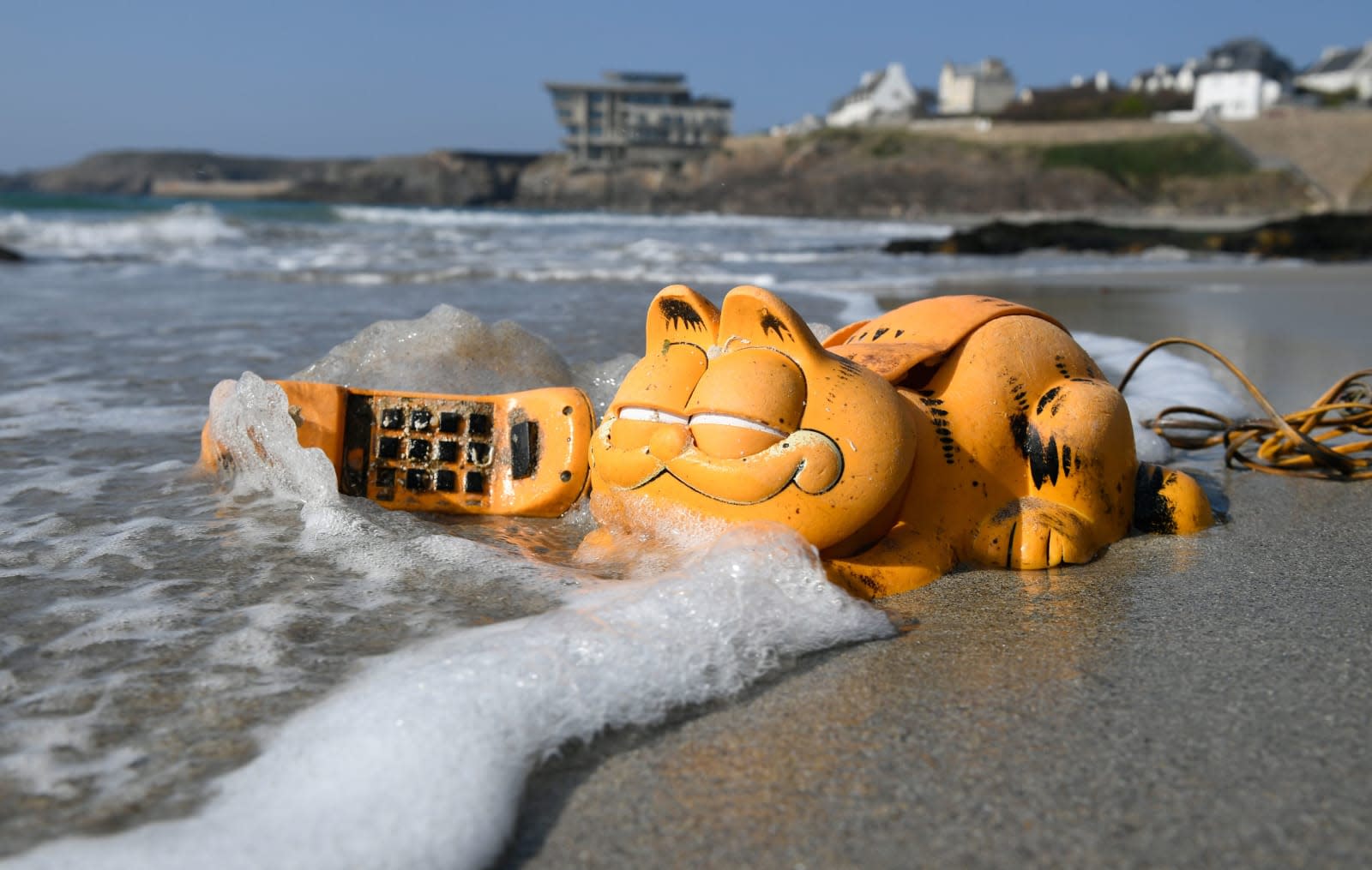 There's no better symbol of plastic ocean pollution and '80s consumerism gone wild than the Garfield phones of Brittany. The handsets, in the form of the aggressively unfunny cat, have been washing up on French beaches for decades. However, the novelty has long since worn off for residents who have been picking them up since the '80s. Now, a local anti-litter group called Ar Vilantsou has finally found the source: a lost shipping container.

Creator Jim Davis made no bones that he created Garfield with merchandising in mind, saying the strip was "a conscious effort to come up with a good, marketable character." The phones were one of many, many items commercialized during the fat cat's heyday, and are still considered a collector's item. The gimmick is that a sleeping Garfield "wakes up" by opening his eyes when you pick up the phone.

As such, they had lots of small parts, including the plastic shell, eyes, cords and electronic parts. It has been such a problem over the years that it became a symbol of washed-up junk for the group, Ar Vilantsou, that eventually discovered the source. "The problem of plastic pollution in the ocean is not comical at all," association president Claire Simonin-Le Meur told France 3.

Since 2008, around 12,000 shipping containers have been lost due to capsizing and other accidents at sea, according to the World Shipping Council. Extrapolating back to 1985, that makes a lot of plastic crap that has been accidentally dumped into the ocean.

The group has suspected for a long time that the source of the phones was a container that had washed or been blown overboard. After searching fruitlessly for decades to find the source, the beach-cleaning members of Ar Vilantsou finally caught a break. A local farmer remembered seeing the beached phones in the early '80s. "At the time, I was between 19 and 20 years old," he told France Info. "There was a big storm. With my brother, we saw phones everywhere on the beach. We're people of the coast, so we decided to go find them."

They discovered the container in a sea cave, only visible at times of very low tides. Unfortunately, it's buried beneath rocks and, due to the difficult access, will likely remain that way forever. "Behind this nice figure of Garfield, there is a plastic pollution which does not deteriorate in the ocean and that will continue to plague us for years", said Simonin-Le Meur.