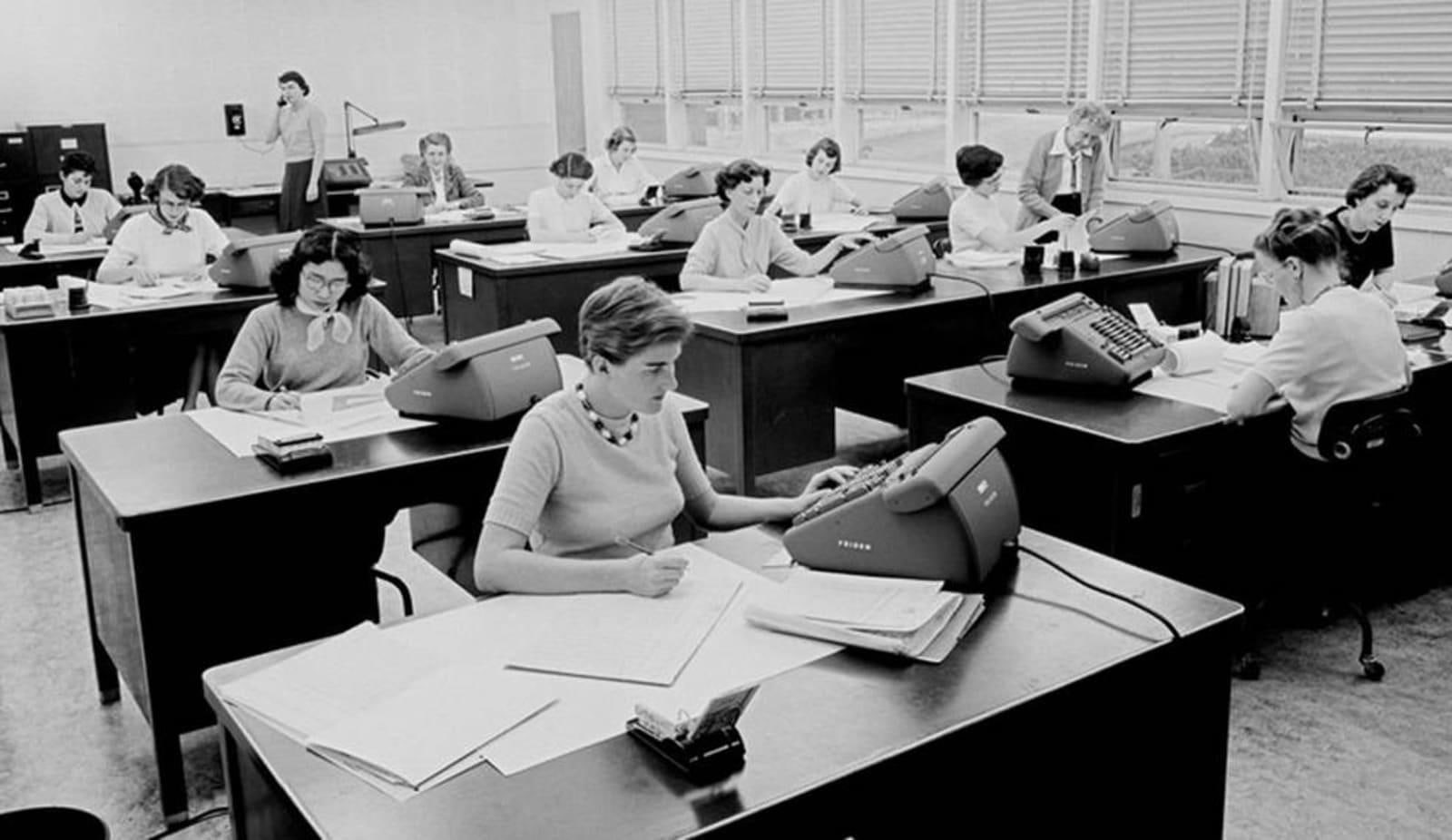 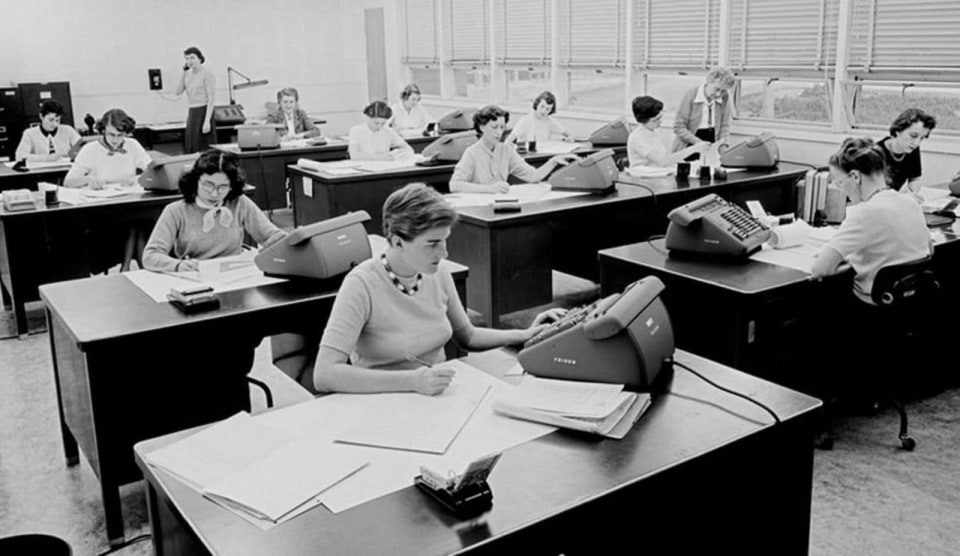 Welcome to Hitting the Books. With less than one in five Americans reading just for fun these days, we've done the hard work for you by scouring the internet for the most interesting, thought-provoking books on science and technology we can find and delivering an easily digestible nugget of their stories.

Ghost Work: How to Stop Silicon Valley from Building a New Global Underclass
by Mary L. Gray and Siddharth Suri In Ghost Work: How to Stop Silicon Valley from Building a New Global Underclass, Anthropologist Mary L. Gray and computer scientist Siddharth Suri, examine the re-emergence of unregulated day labor in the digital era -- this time with a fancy new family-friendly moniker: the gig economy. And in the excerpt below, we see that none of this is new. The practice of exploiting workers has a long and storied history. It once even helped NASA achieve its dream of reaching the stars.

Temporary Computers Sent Us to the Moon

The erosion of labor protections for workers seen as "unskilled" but working outside of unionized manual jobs moved like water through cracks, exploiting and capitalizing on society's assumptions about whose work needed protection and who was worth protecting. Buried within the exemptions of the FLSA and the Taft-Hartley Act are clues about mid-20th-century assumptions about which workforces needed protection from unemployment and what -- or who -- seemed safe from automation.

For example, the FLSA excluded volunteering, what we might think of today as the ubiquitous unpaid college internship. Volunteering was considered apprenticing, core to building one's professional identity. Since medieval times, divinity, medicine, and law, the so-called "learned professions," were seen as the exclusive paths of the educated classes. These skilled vocations needed no workplace protections. Their advanced degrees insulated them from economic insecurity. That is how a college education came to be seen as a gateway to the middle class for anyone who wanted to leave behind the mines or factories.

Most doctors, lawyers, and clergy operated as small businesses, typically self-employed, non-unionized professionals pooling resources through private practice. The work conditions of the professions, at least
in the early days of modern industrial capitalism, did not seem relevant to the debates over FLSA. And so, the Fair Labor Standards Act applied to "any individual employed by an employer" but not to independent
contractors or volunteers training to enter the professional class. Both types of workers were considered liminal characters. The contractor was treated like a hammer or mechanical pencil, there only to do an immediate task. Interns, by contrast, were being groomed to step into the corner office someday.

By the early 20th century, any occupation shaped by advanced training, certification, and professional codes of conduct was valued as a skilled profession. The de-skilled worker in a factory setting became
synonymous with the unionized worker able to protect their position and workplace through federal regulations. Anyone considered "non-exempt" from the Fair Labor Standards Act could expect to receive overtime for hours worked beyond the maximum workday. But tucked in the regulations were exceptions. Salaried clerical and administrative workers, though some of the lowest-paid employees, could be legally
required to work beyond 40 hours and were not eligible for overtime. Professionals doing creative or non-routine work in the office were also exempt. These exemptions help explain how independent, contingent workforces became a standing army of staffing and temp services, and its own lucrative industry. Much of the exempt contracted, temporary labor grew in the shadows, supporting professionals as they built out information services industries like accounting, scientific research, law, engineering, and finance at the close of World War II. Educations in law and medicine remained socially coveted and the only gateways to highly skilled white-collar professions. But the expansion of administrative services of all kinds meant that the "learned professions" were no longer the only ways to find economic opportunity and social respectability. They came with a price tag: job security.

Take, for example, the human computer pools at Langley Memorial Aeronautical Laboratory, in Langley, Virginia. Since the 1600s, the term "computer" has been used to describe a human doing hand calculations. By 1946, thousands of young women had been recruited and trained to work as "human computers" for the U.S. Civil Service Commission at research centers like Langley Field all across the country. They were the computational processors behind everything from deciphering coded messages sent by Nazi Germany to calculating how much thrust test rocket engines created and how to adjust their weights and heights to make them go faster. Langley's first female computing pool opened in 1935. Under the FLSA, the federal government's War Department was granted latitude to employ independent contractors as civil servants.

By 1946, Langley Field's campus had reorganized as the National Advisory Committee for Aeronautics (NACA), NASA's precursor, with only a handful of women holding the professional title "mathematician."
The majority remained designated as lower-paid "sub-professionals" for several years after the war, including African American engineer Katherine Johnson, featured in the 2016 hit movie Hidden Figures, who would go on to calculate the launch windows for Apollo 13. The lower wages and ranking attached to computers reduced lab costs. Directors could justify the entry-level, contract-based assignments because none of the women hired would be considered "professional" with no more than high school or vocational training. Johnson and fellow lead computer Dorothy Vaughan, who ran Langley's all-black "West Area Computers" wing, were hired at Grade P-1. This level guaranteed the women $2,000 per year, more than twice what they could hope to earn at their jobs as teachers in the segregated high schools of the South. But the terms of employment made it clear that they were not seen as the valued workers at Langley. They were hired "for such period of time as your service may be required, but not to extend beyond the duration of the present war and for six months thereafter."

For those first few years, time off for contract workers was not an option. Even holidays were considered workdays as long as the U.S. space race against the Soviet Union was on. Johnson and Vaughan eventually went on to professional rankings and full-time employee status. But the majority of computers were fired, as at-will contractors, once the predominantly male career engineers at Langley Field felt comfortable with the IBM 704. Still prone to overheating, the IBM 704 became the first computer able to reliably run calculations that had taken hundreds of women to confirm. It took nearly a decade after the arrival of the IBM mainframes at Langley for engineers to start fully turning over their work to the machines, keeping a pool of human computers on-site to double-check the machines' output. This made women like Johnson and Vaughan paradoxically contingent yet indispensable. Langley was not exceptional.

The human computers at NASA's Jet Propulsion Lab (JPL), in Pasadena, like the women at Langley Field, were recruited in the 1940s and '50s as contractors or temporary workers. They made all the calculations at JPL behind the country's earliest missile launches and bomber flights over the Pacific, as well as the United States' first satellite and guided lunar missions. They even gave the Mars rover, the planetary exploration vehicle sent to Mars, its first launch plan.34 The majority of women at JPL had a similarly limited career path as the contract workers at Langley. Most started out as paid temps through the Works Progress Administration during World War II. JPL posted ads for part-time help in the mathematics and physics departments of surrounding colleges, calling out, in all caps, "COMPUTERS URGENTLY NEEDED." Below the headline, the job description implied, clearly enough, that young women were its target audience: "Computers do not need advanced experience or degrees but should have an aptitude and interest in mathematics and computing machines." In those days, if an office job didn't require an advanced degree, that meant it was open to women. Typically, the expectation was that women, as much as their white-collar employers, would not want a job to last more than the intervening years between graduating from high school (or, more rarely, college) and getting married. This was made even easier because of the lack of laws that prevented discrimination based on marital status. It was perfectly legal for managers at JPL, like those on the other side of the country at Langley, to fire women once they shared their plans to marry or became pregnant. Workers hired on contract, like human computers paid through federal government contracts, were not seen as valuable employees to cultivate. They were considered interchangeable, adding little to no skill, expected to leave when their projects ended.

Early forms of ghost work continued to flourish throughout the 20th century. Fast-forward to the 1980s, when temporary staffing agencies like Kelly Girl Service and Manpower contracted out more workers than most companies retained as full-time workers. Manpower's temp pool surpassed GM's full-time employees in the 1990s.37 Sociologist Erin Hatton makes a compelling case that the wholesale swapping out of full-time employees for contingent staff was not just the fallout of technological change. She charts the staffing and temp agency sector's growth as its own service industry. What did it sell? The suggestion that young women and others, constrained by family care, limited educational opportunities, or geography, would reduce the companies' costs. Hatton argues that this "liability model," which treats workers as a drag on corporate profits, overtook the "asset model" of employment. It is possible that the asset model never made it out of the manufacturing sector after the passage of the Taft-Hartley Act in 1947. What is clear is that, by the time the internet was born, the U.S. was already moving quickly to a reliance on contract-driven services indefinitely staffed by contingent labor.

In this article: business, column, computers, hitting the books, hittingthebooks, human computation, Langly, NASA, space, tomorrow
All products recommended by Engadget are selected by our editorial team, independent of our parent company. Some of our stories include affiliate links. If you buy something through one of these links, we may earn an affiliate commission.