Roli has been making unconventional electronic music instruments for about a decade now. Its Seaboard series take the traditional keyboard design and infuse it with some notable tricks, like pressure-sensitive keys that allow for far more modulation effects than you can do on a piano. Its series of modular Blocks gadgets take that pressure-sensitive surface in another direction, combining the features of a synth and drum pad into a much more affordable device than the company had released before.

However, Roli has never made a traditional keyboard before, until now. At first glance, the 24-key Lumi looks very much like any other MIDI keyboard out there, albeit one without any bezel to speak of. But, as this is a Roli product, the Lumi isn't meant to just be another small keyboard. The Lumi's keys all light up via internal LEDs, and those lights match up with a Lumi app for iOS and Android that's meant to teach users how to play. The app, meanwhile, more than a hundred songs players can learn, including songs from big-name artists like Beyoncé and Pharrell.

As you might expect, the colored keys provide a guide to new players. But rather than start out doing scales, the Lumi app lets you dive right in to those pop songs as a way to provide some instant gratification. For example, I got to play a little of the indelible Europe classic "The Final Countdown." If you've watched any Arrested Development over the years, you'll know it kicks off with a prominent, memorable synth line -- a perfect and simple melody for someone new to a keyboard to play.

Lumi gets you right into it with a timeline of notes that float by on the display of your device. (You're best off using this with an iPad; the extra screen real estate makes the experience significantly better.) If you've ever played Guitar Hero, you'll be right at home. The colored notes correspond with the colors of the keys on the Lumi -- play them in time with the display, and you'll quickly be jamming along to the song. The closer you get to nailing the performance, the more "points" you'll get.

The Lumi app offers more than just these simple, one-note melody-style tracks, though. From what I saw when demoing the system, songs will have several modes to play along with, from easier melodies to more intricate chords (depending on the song, of course). The software also can teach players music -- while you can start with the simple, abstract Guitar Hero interface, other modes show a traditional music staff, but the notes will still be colored to give you a reference to the keys. From there, you can add in timing, as well, eventually transforming the experience to a standard musical notation system. 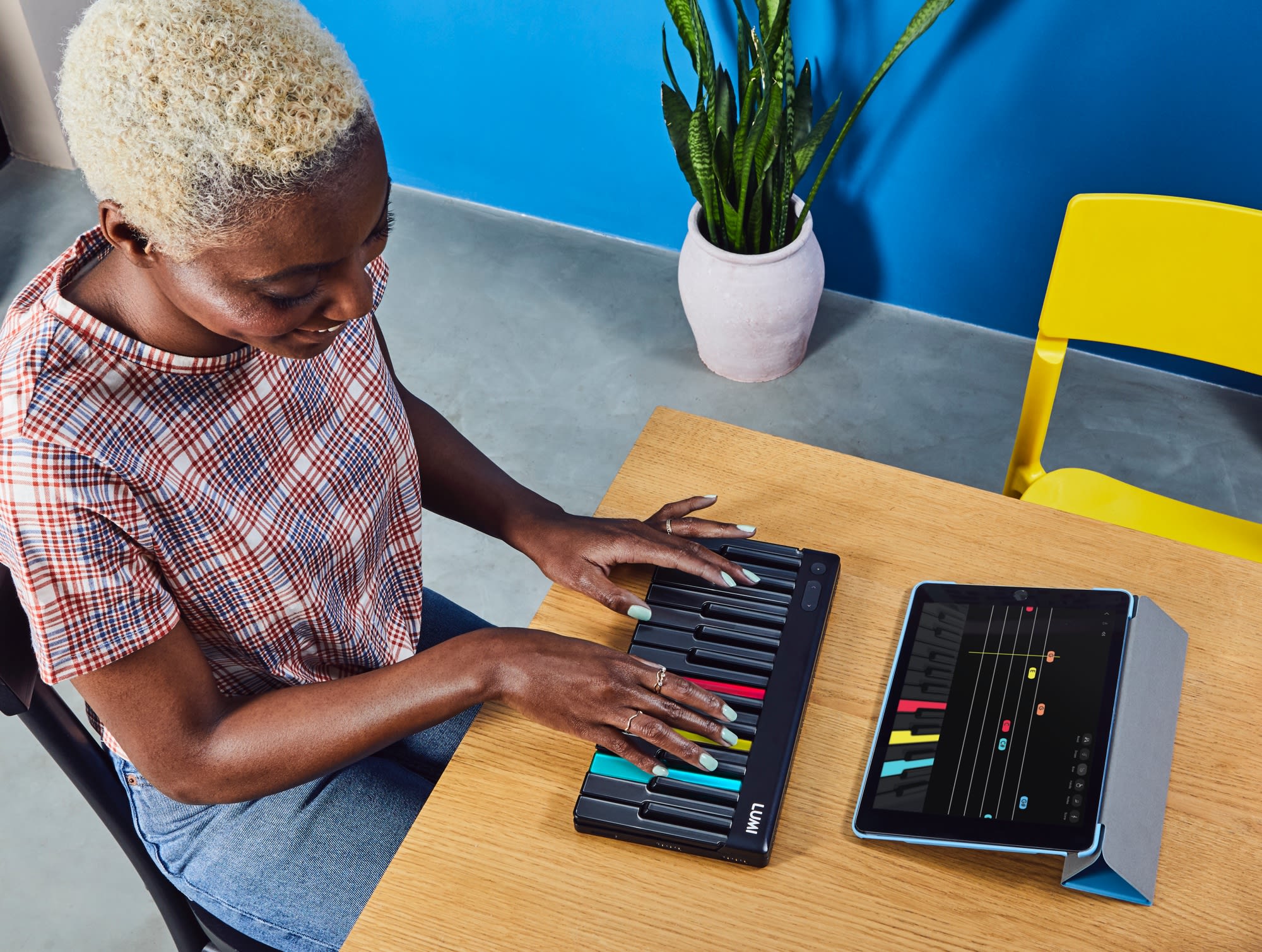 Beyond letting you play along with songs you'll recognize, the Lumi app will also mix in lessons in playing technique, scales, chords and so on. That'll be important if you want to take your keyboard skills to another level. When I was demoing the Lumi, I found myself not quite remembering exactly where my fingers should be -- fortunately, there's a lesson for that.

As for the hardware, the Lumi keyboard uses the same "DNA" connector found on Roli's Blocks lineup. This means you can link multiple Lumi keyboards together to give yourself a bigger performance space; the bezel-less design means that transitioning from one keyboard to the next should be a seamless process. You can also link other Roli Blocks up and use the Lumi as a straight MIDI keyboard with the Roli Studio Player app or DAWs including Garageband, Ableton and Logic Pro. Having some room to grow beyond the basics here certainly makes the Lumi more appealing. 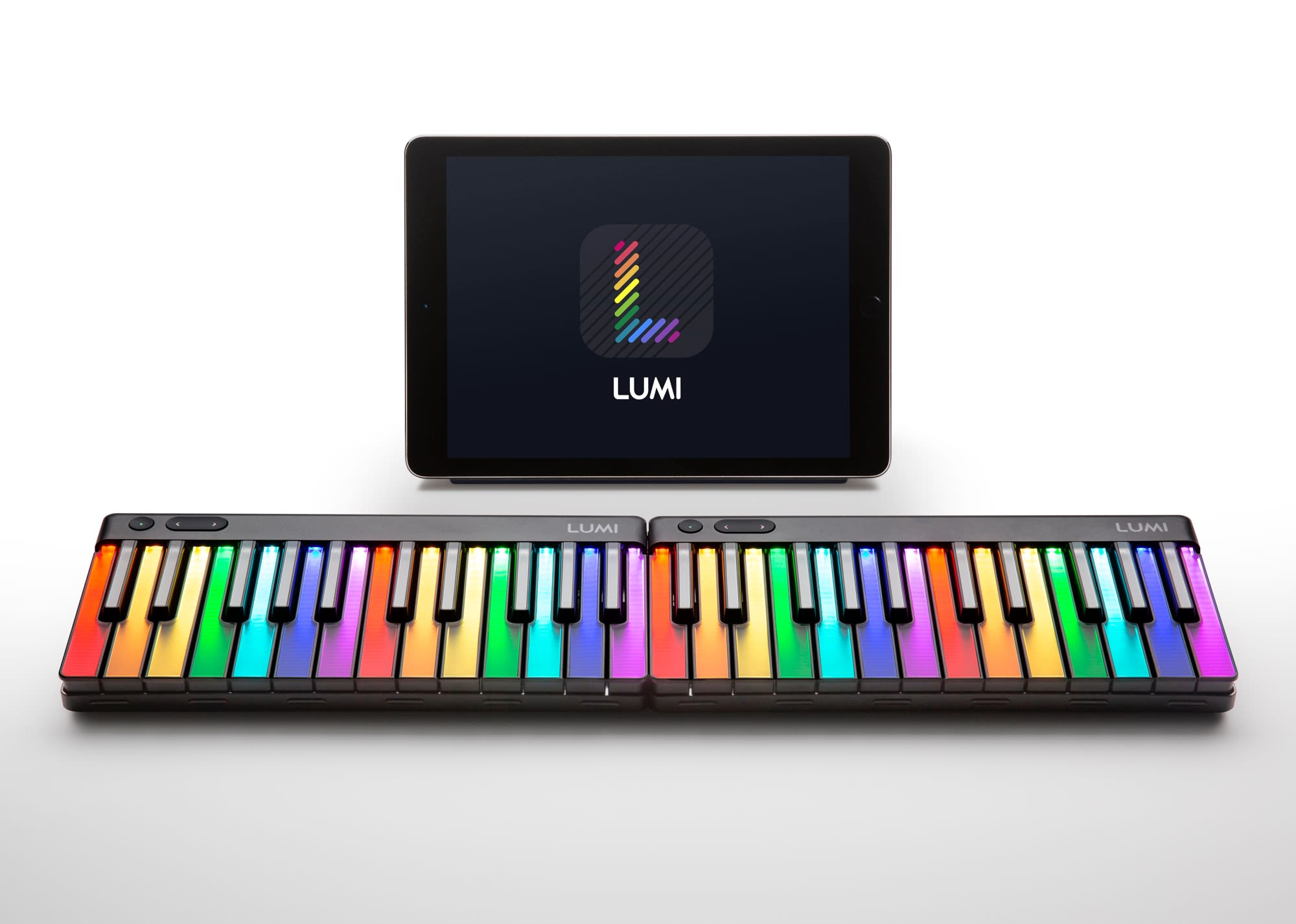 Of course, the Lumi hardware needs to feel good for players to want to keep using it. I can't vouch too strongly for that yet, as I was using pre-production hardware that just didn't quite feel ready for prime time. But from a spec perspective, the Lumi has a key plunge distance of 10mm, which Roli says is 92 percent of what you'll find on a grand piano. That should go a long way towards making the Lumi feel "right" when playing it. The keys themselves aren't full-size, but the DS5.5 size means they're about 7/8ths size; this helps to keep Lumi small and portable while offering a key size that should be comfortable for a large range of people.

As for the launch strategy, Roli is taking Lumi to Kickstarter today; the keyboard will start at $250. It's always a little odd to see an established company take the Kickstarter route, but Roli says that it's doing so to take advantage of the tech-savvy community that's often on the lookout for offbeat products. The company thinks it'll find a different audience than those that are already familiar with Roli's brand, and said that if it was doing the Blocks launch over again it might have picked Kickstarter as well. The Lumi is expected to ship to those who pre-order on Kickstarter by October, and Roli says it'll be available at more traditional retailers this fall as well.

All products recommended by Engadget are selected by our editorial team, independent of our parent company. Some of our stories include affiliate links. If you buy something through one of these links, we may earn an affiliate commission. All prices are correct at the time of publishing.
View All Comments
Roli's light-up Lumi keyboard teaches you how to play