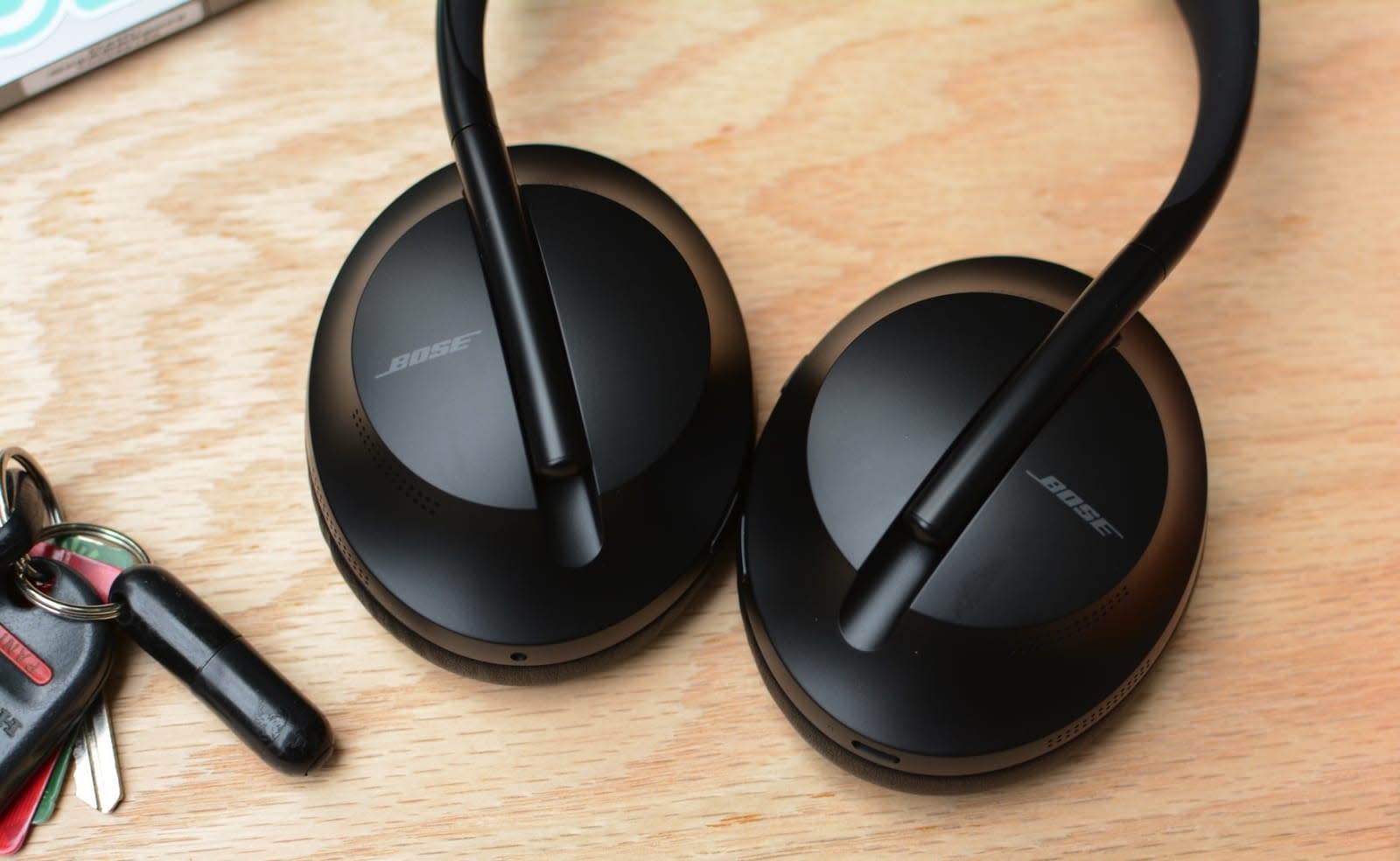 Bose once dominated the world of noise-canceling headphones. For years, the company's QuietComfort line was the industry standard, mostly due to it's best-in-class ANC (active noise cancellation). At the time, it was a game-changer for frequent fliers and people trying to block out noisy work environments. Enter Sony's WH-1000X line. Now in its third iteration, the WH-1000XM3 has taken over the top spot with a stellar blend of sound, features and the ability to block out the world. Bose is playing second fiddle, but its 700 headphones pack in a lot of features for $399 in a bid to retake the crown.

Let's get something out of the way from the jump: The Bose 700 isn't a successor to the QC35 II. The company has built a loyal following for the QuietComfort line, and understandably, it isn't going to drop that brand for the hot new thing. Instead, the 700 is a new direction for Bose headphones, one that blends the latest in voice, noise cancellation, touch controls and more in a modern-looking package.

I'll be honest, I'm not a fan of the QuietComfort design. Like it or not, they scream "dad on a business trip," and they've looked more-or-less the same for years. That's not the case with the 700. Sure, the earcups have a similar shape, but that's pretty much where the similarities end -- at least in terms of design. Bose revamped the headband, opting for a slimmed-down, stainless-steel version. The headband slides on the outside of the earcups to adjust the fit, instead of having a clunky clicking mechanism. There's no folding hinge this time, but the earcups do rotate flat for storage. Once these are stored in the case, the package is quite slim, so you probably won't miss the fact that these don't fold up like the QC 35. 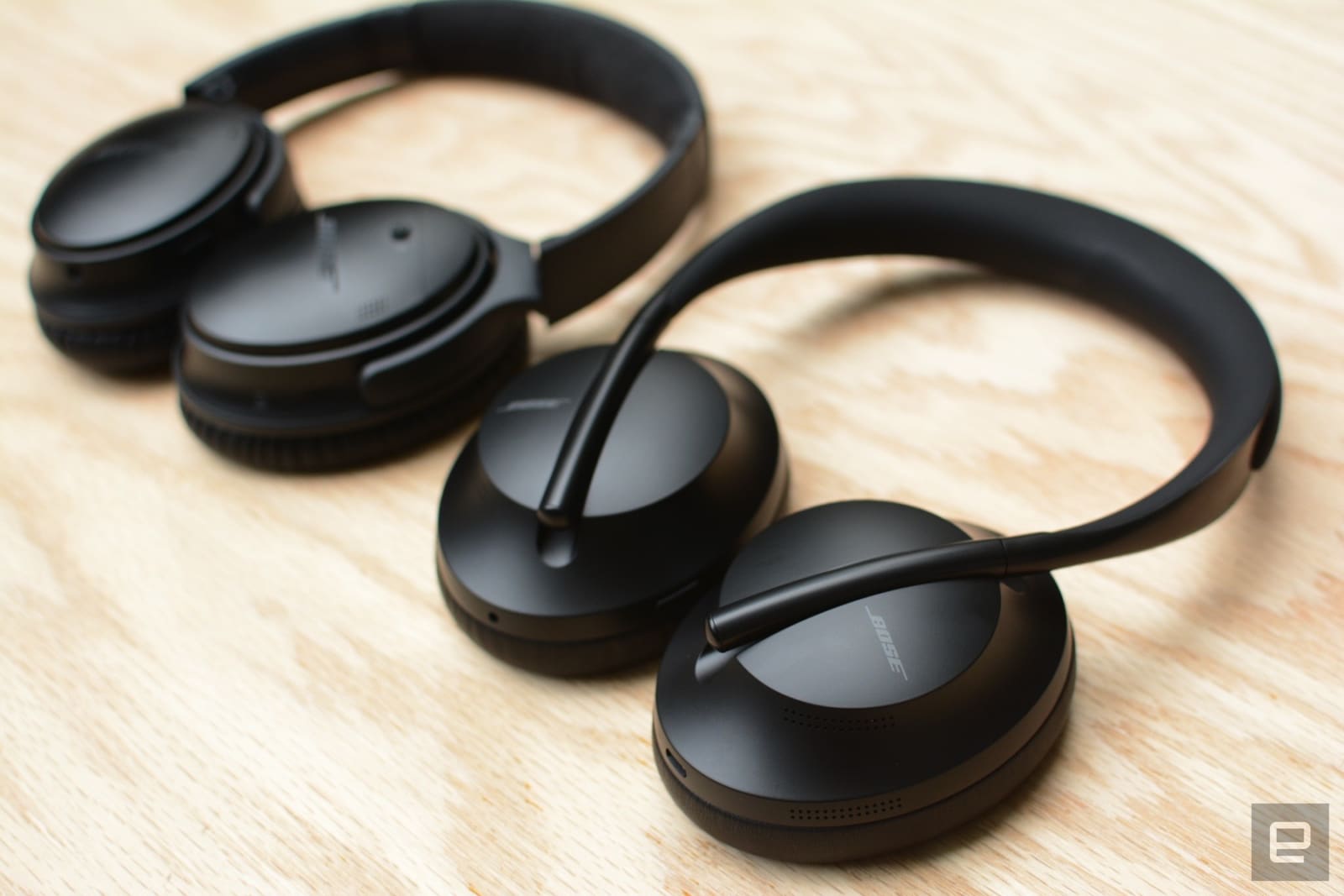 Yes, the 700 looks much better than its predecessors, but it also feels better too. The new headband has a soft padded underside that keeps the headphones feeling light on your dome. The leatherlike cushions on the earcups are also soft but sturdy. And even though the 700 is slightly heavier than the QC 35 II (about 0.6 ounces more), you can't tell. This new model feels so light that you can wear them for hours at a time with ease.

Bose also rethought its onboard controls for the 700. On the QC 35 II, there were physical buttons to wrangle settings, music and a virtual assistant. Nowadays touch controls are all the rage, so the company chose a mix of the two and the end result is great. On the right earcup, there's a touch-sensitive area where you can adjust volume (swipe up or down), skip tracks (swipe forward or backward) and play/pause (double tap). Hold your finger on the touchpad and the 700 will let you know how much battery is left (in hours). These touch controls are a breeze and didn't frustrate me as they have on other headphones. There's also a combination Bluetooth-pairing and -power button on the right alongside a dedicated button for Google Assistant, Alexa or Siri. You can choose to summon Alexa with a wake word as well, but you'll need to push the button to call on the other two.

The Bose QuietComfort 35 II and the Bose 700

On the left earcup, there's a physical button for cycling through your three favorite noise-canceling levels. By default, it's set to 0 (full awareness), 5 (some awareness) and 10 (full noise-cancellation), but you can change those in the Bose Music app. Press and hold that same button to active a Conversation Mode whenever you need to chat. This simultaneously pauses any audio and disables any noise-cancellation that's active. When you're done, you can press any button or tap the touch panel to resume both audio and noise-cancellation at their previous levels.

Speaking of noise-cancellation, Bose has really stepped up its game with customizable levels. Gone are the days when it was all or nothing. Now you can choose how much noise you want to let in at a level between 0 and 10. Of course, when you need to block out everything around you, the 700 does a stellar job with that. Noise-cancellation was never an issue for Bose headphones, and that's still true. However, adding the ability to tweak the level based on your surroundings or disable it quickly for a conversation, takes great ANC a step further. It's a lot more useful this way. 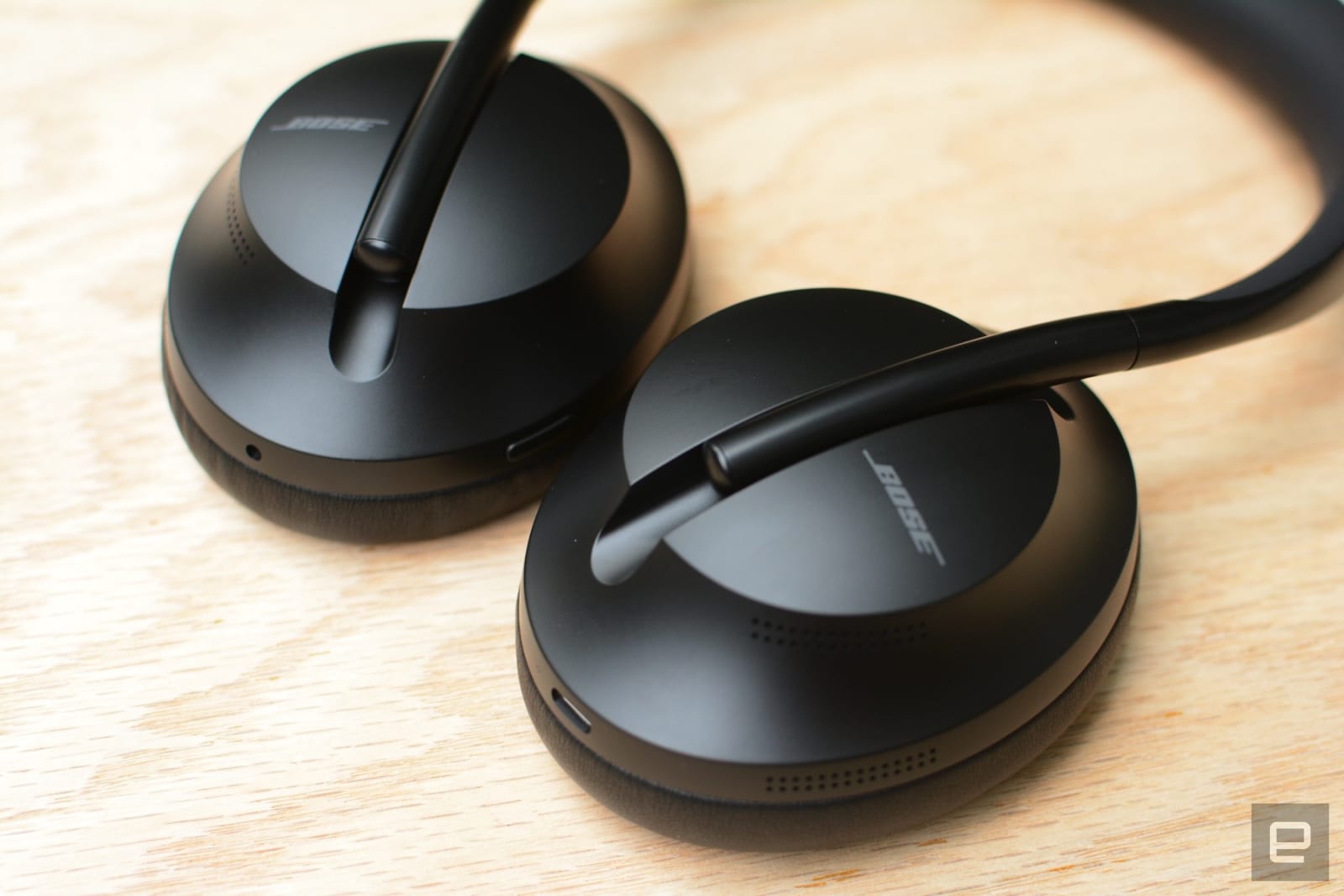 Voice calls are another area Bose has improved. On the 700, there are eight microphones total (four on each earcup) that work together to silence your surroundings and focus on your voice. The goal is for you to be able to take a call, use voice commands and more from the confines of a noisy coffee shop or busy city street. Usually making a call with headphones or earbuds ends up sounding like you're using speakerphone. But with the Bose 700, the person on the other end thought I was just talking into the phone as normal, even when I was near a loud TV. A lot of headphones promise better voice clarity -- Bose actually delivers.

Thanks to new drivers, the Bose 700 sounds noticeably better than the QC 35 II. The company's headphones already had a crisp clarity to their sound, and that's still true. Even at full volume, instruments stand on their own without becoming a muddy mess. That's quite a feat when you're listening to the likes of Tool, Gojira, August Burns Red and Oh, Sleeper -- metal bands with songs chock full of grungy guitar riffs, chaotic breakdowns and plenty of room for things to blend together. Throughout all of those, snare hits remain crisp, the bass drum stays punchy and guitars retain their detail.

Switch to a more mellow genre like jazz or bluegrass, and the clarity and depth really shines. The folky instruments of Punch Brothers, for example, sound like they're layered on top of each other rather than mixed together. The banjo winds in and out of a strumming acoustic guitar and the fiddle (violin). And the low hum of the upright bass is a constant, laying underneath it all as a backbone. The Bose 700 handles bass-heavy genres well too. The only downside is that highs can be harsh at times, especially if you like things loud. The hi-hat on Denzel Curry's "Ricky" is an example. And sadly, you can't adjust the EQ in Bose's app.

The 700 is also compatible with Bose AR, a series of apps for headphones and those weird Frames audio sunglasses. Being an audio company, Bose has taken a sound-first approach to augmented reality when almost everyone else is going visual. There are apps that tell interactive stories based on your movement, offer workout coaching, give info on points of interest and more. For now, though, the collection of apps is small, and the most interesting one to me -- Otocast, the points of interest guide -- is only available in one city. Like my colleague Cherlynn Low said when she reviewed the Bose Frames, Bose AR could be something great one day, but it still seems like it's in the early stages.

Bose promises up to 20 hours of listening time on the 700. With noise-cancellation turned up to 10, I managed just over that. The 700's voice prompts will also let you know how much time you have left when you power them on or when you hold your finger on the touchpad. Twenty hours isn't the best battery life available, but it's still decent -- Sony promises up to 30 on the WH-1000XM3, for example. However, the figure Bose offers here is plenty of time on a charge for most people, and it will get you through a few days before you'll need to plug them in. If you're in a hurry, a 15-minute charge will give you 3.5 hours of listening time. 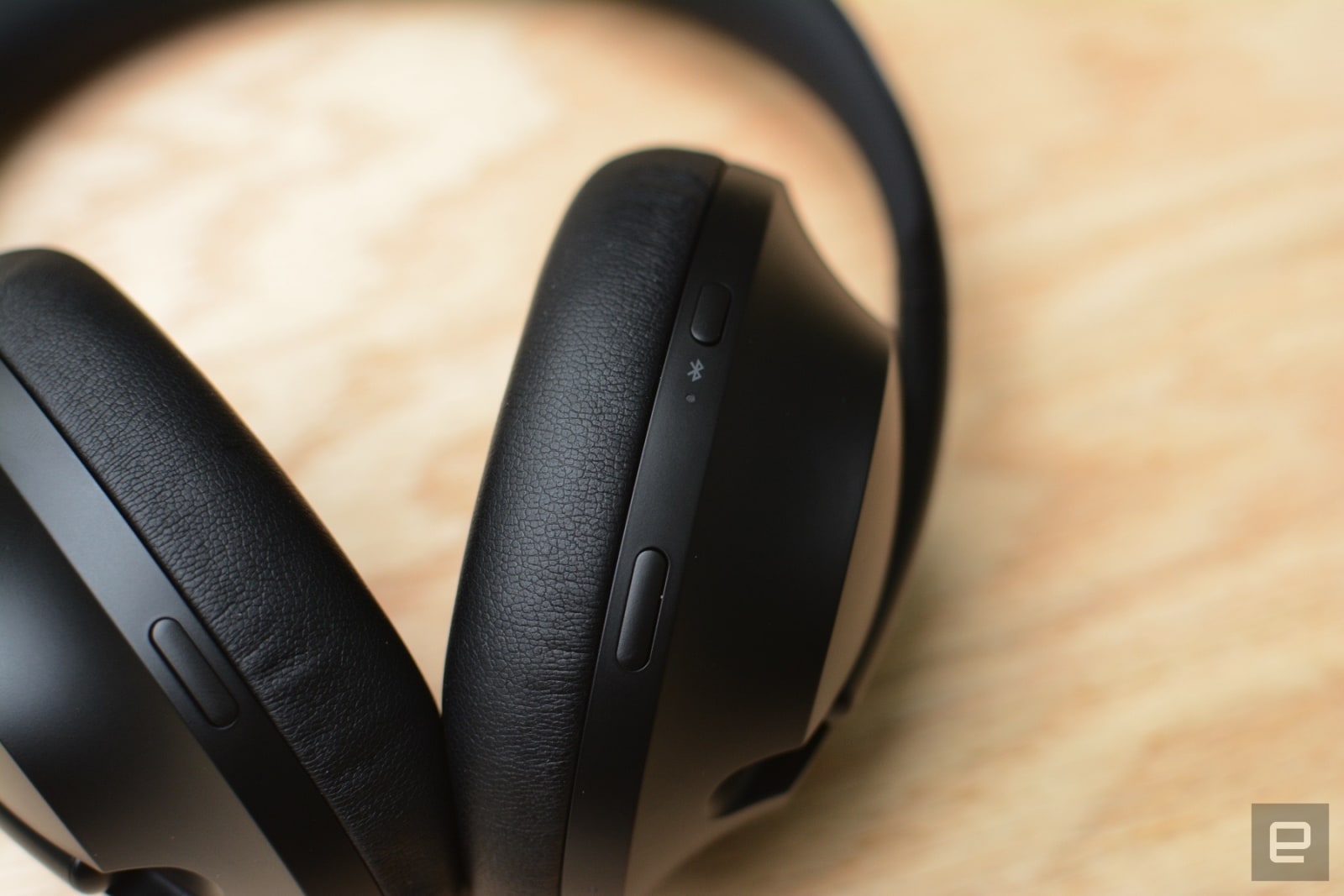 By now you're probably tired of hearing about the Sony WH-1000XM3, but they're still the best noise-canceling headphones available. They're almost a year old, so maybe we'll see a fourth version at IFA in a few weeks. That's around the time Sony has introduced new models in the past. Not only are they outstanding, but the WH-1000XM3 are also $300 -- $100 less than the Bose 700. The WH-1000XM3 has better sound quality, great features and powerful noise cancellation. And while the Bose 700 is very good, Sony is still the best.

Bose went back to the drawing board for its latest headphones, and that decision was a success. The 700 has better noise-cancellation thanks to customization, and thankfully, it looks much better than the company's previous models. Touch controls are reliable and the battery life is adequate to keep the music going for as long as you'll need. There's a lot to like here, but for $399, these needed to be perfect to dethrone Sony. That said, Sony needs to nail any future version of the WH-1000X to keep Bose from retaking the crown. The gap isn't as wide as it was a few months ago.