It's a great machine, but the price is a little steep.

This month, Senior Editor Dan Cooper tells us about his new (if gently used) rowing machine and what he likes, and dislikes, about it.

There are other, lesser rowing machines, but Concept2 has a justified reputation for being the best. They're well built, reliable and popular with elite athletes, which means they're totally out of my price range (think: $945 new).

Thankfully, my Facebook Marketplace obsession meant that I found a real bargain: a nearly-new Model D for just £650 (around $800).

Its previous owner had suffered a rather nasty knee injury early on in her rowing career and, sadly, it had languished in her conservatory for two years. Aside from needing a half-decent clean and some oil, it was in otherwise perfect condition. And, because it was new, it came with the latest Performance Monitor, the PM5, which was released in 2014.

A rowing machine (or ergometer, because the first ones were used to measure human exercise) commonly use an air fan, pulled by a chain. You can alter the resistance of the fan by opening or closing a side-mounted air vent, making them much harder to pull. The benefit is that you get a great upper-body workout without any pain, much like a spin bike will offer for your legs. 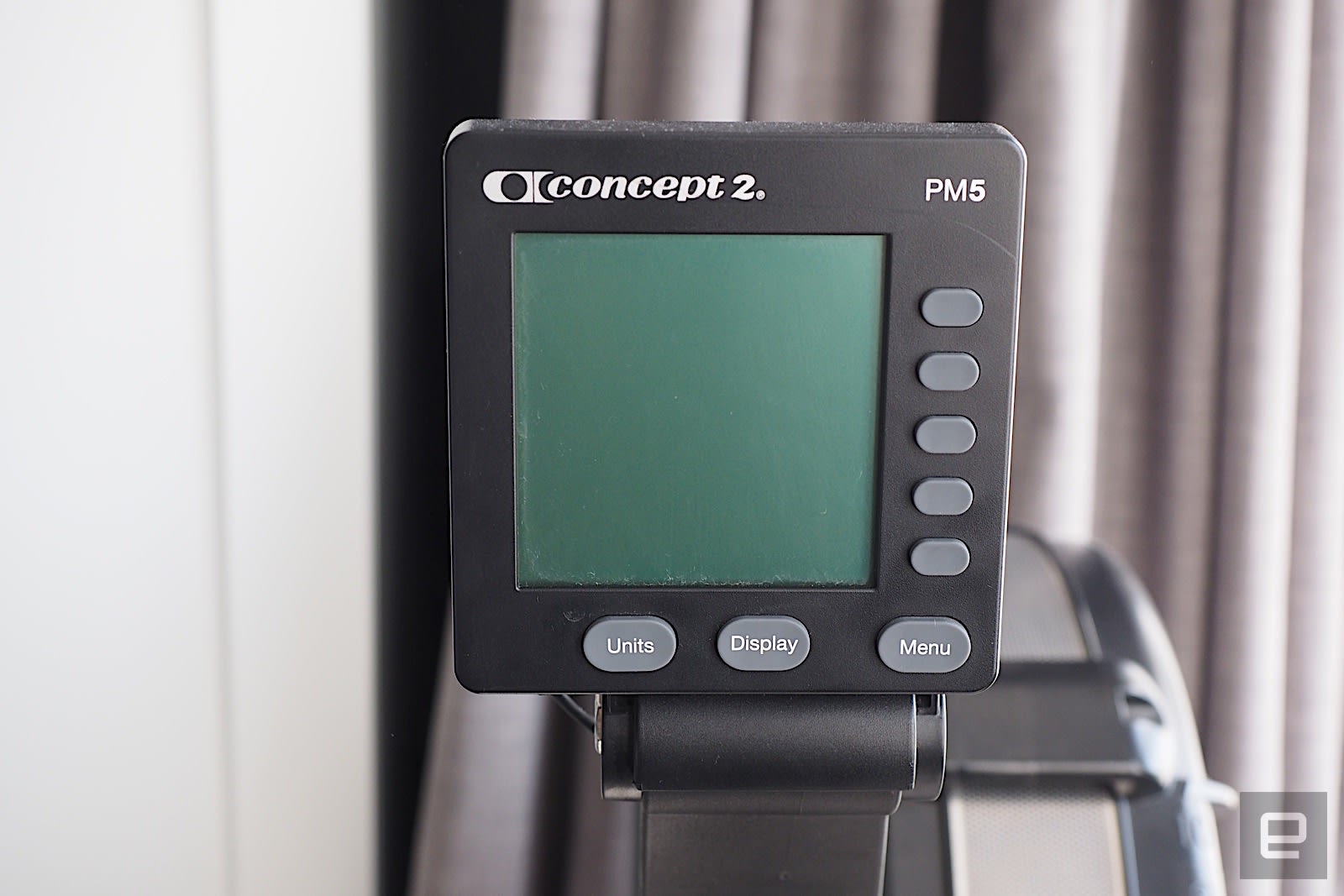 In order to keep me motivated to exercise, I've parked the rower in my bedroom with a good line of sight for the TV. Mostly because it gives me little excuse not to use it most days, since I can't just ignore it like many other pieces of equipment. Early on, I started doing 2,000-meter rows, but have since switched to doing a 24-minute set each day.

Twenty-four minutes is, alas, the duration of a single episode of classic Doctor Who, which I watch during each set. Since I don't enjoy exercise, per se, combining rowing with TV is, for me at least, one way to keep my interest going. If I know that I've got to watch a four-part serial, one episode a day, I'm more inclined to get on the rower to watch it, which helps my habit-forming.

Much as I love it, and much as I love owning one, the experience of using it on the regular highlights some of the issues with it. Like, the cradles that hold your feet in place are made of flimsy plastic that move as you row, pulling on the heel of your shoe. I'm almost always feeling a small friction burn on my heel at the end of a day's set. 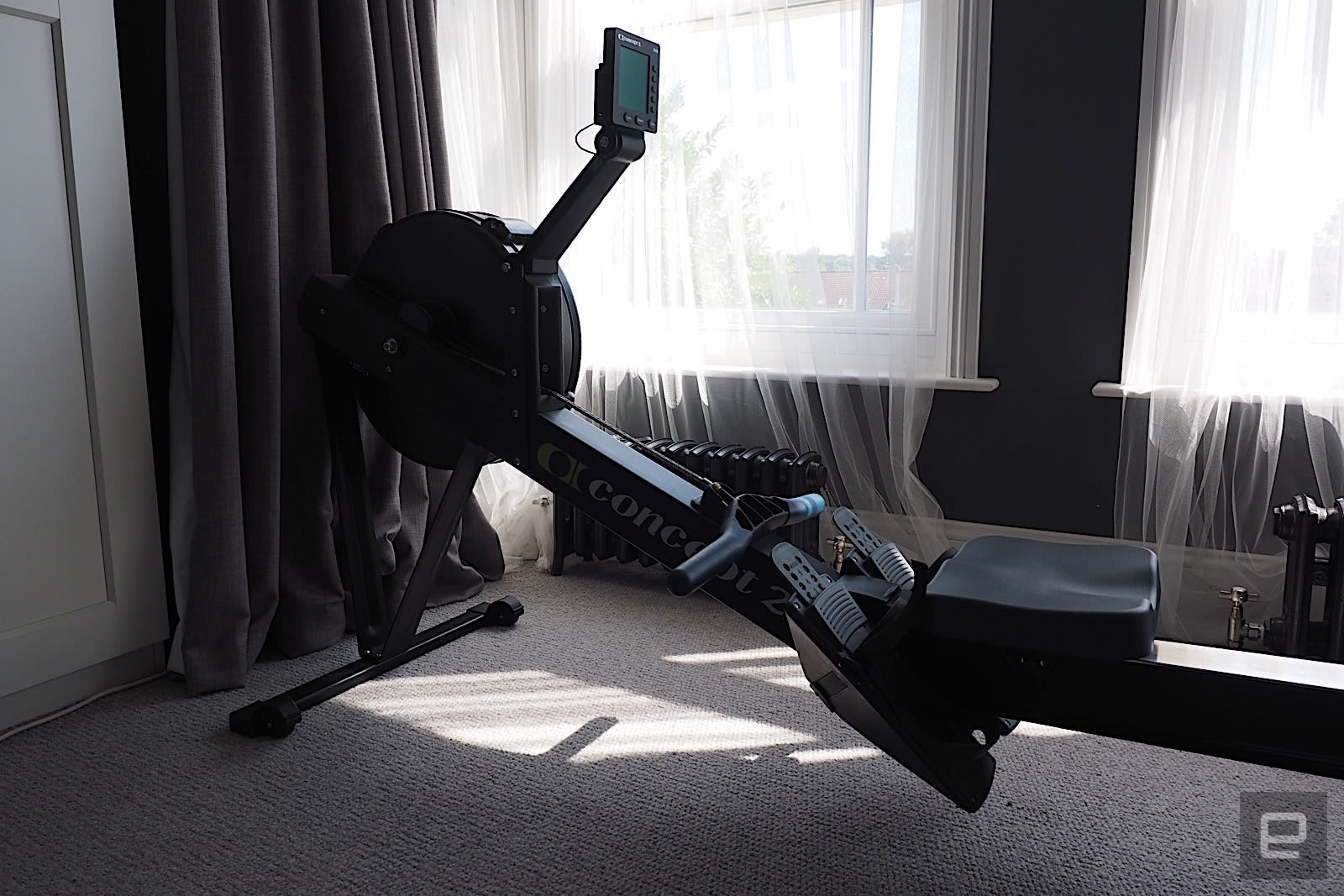 Similarly, the straps which sit over the top of your feet to hold them in aren't comfortable or secure enough for prolonged use. I've taken to wearing a very thick pair of running shoes with thick socks to cover for both, but it's annoying just how much my feet move during rowing.

I could moan about the calluses that are developing on my hands as a result of lots of rowing. I don't know if that's the sort of thing I should be boasting about, or if my milquetoast fingers need toughening up.

The Performance Monitor, too, is a little lacking -- unsurprising given the PM5 debuted in 2006. Its monochrome display and limited feature set gives me a serious case of Peloton envy, even if Peloton doesn't making a rowing machine yet.

Bluetooth sync is pretty bad, too. No matter how hard I tried, I can't get ergData (Concept2's iOS app) to sync my rows online. In fact, all of the rowing apps are pretty sucky, and I don't want to have to hook my PM5 up to my laptop, over USB, every time I want to upload data.

I don't regret buying the Concept2, because it really is a great workout and I'm using it pretty much every day. The aim is that I will, eventually, be able to crank out 6,000 miles in a set, something that I'm slowly working up to. But I can't help but feel as if the high price of this machine (as new) isn't necessarily justified by the tech on offer. It's not a bad piece of gear, but in a world where Hydrow exists, I feel like Concept2 needs to up its game.

All products recommended by Engadget are selected by our editorial team, independent of our parent company. Some of our stories include affiliate links. If you buy something through one of these links, we may earn an affiliate commission. All prices are correct at the time of publishing.
View All Comments
What we're buying: Concept2 Model D with PM5 rowing machine