The rumors both are, and aren't true. LG has built a dual-screen smartphone that drops around the same time as Samsung's Galaxy Fold and Huawei's Mate X. But it hasn't, because it's an upgraded G8 with a secondary display case similar to what we saw on the V50 ThinQ. Will this mix of flagship specs and a quirky screen case be enough to tempt you?

We all know the backstory. LG, struggling against the mobile competition and unwilling to burn cash on gimmicks, has stayed out of the race to make a folding phone. We also know it could do it (and likely has behind the scenes), since its TV division already makes flexible, rolling screens. Plus, LG Display makes plenty of mobile displays, so the knowledge is clearly there. But the official line has been that LG won't get involved unless it sees people buying them in large numbers.

Here, LG has opted for compromise, with a second screen case that connects to the G8X over USB-C (the V50 version was wireless). Slot the phone in to the case and activate the second display from settings, and you'll have one phone with two screens. The case also adds a 2.1-inch monochrome OLED cover display, much like the Active Covers of Android phones old. It'll show the time, and markers for notifications on the outside of the case. 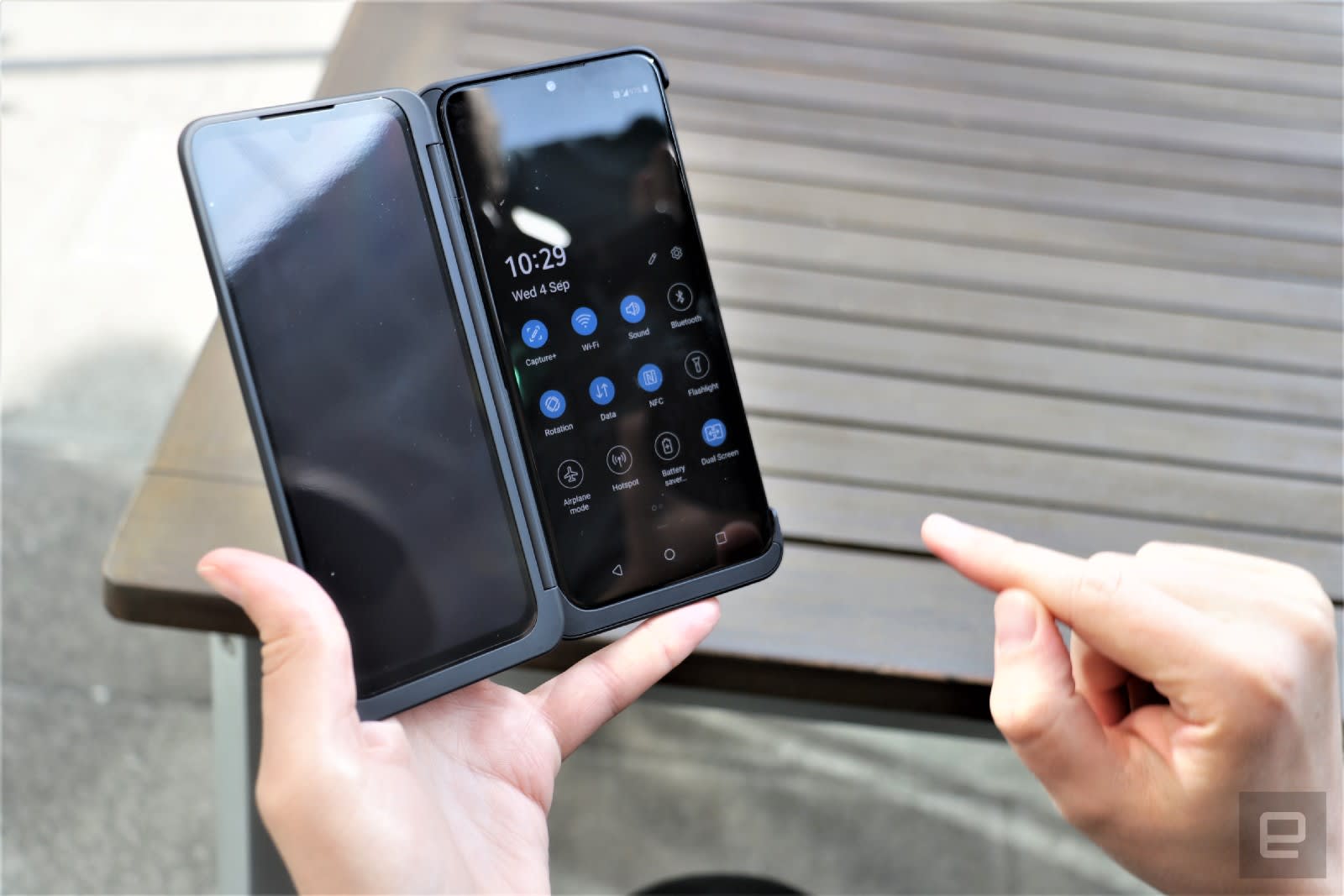 Unlike the V50's Dual-Screen cover, both displays here are the same: a 6.4-inch OLED FHD+ with an aspect ratio of 19.5:9. And they both have notches.

LG says this is for symmetry, but a cynic would think it's because the company didn't want to make two different production runs for the same screen. Both are, as you would expect from one of the world's best TV makers, gorgeous and bright with deep colors. And neither did at all well in the bright sunlight, which made photographing it more difficult than expected.

You may be wondering, given the expectation (and rumors) that this would be called the LG V60, why it's a G-series phone. It's because LG promised that all of its V-series devices would be 5G only in the future. Since the G8X will be available in both 5G and LTE variants, and is LTE-only in the US, it isn't entitled to use the V-series branding.

I tried a hand-built prototype that wasn't properly calibrated, and LG asked for patience when judging the early hardware. I want to mention, however, that because OLED displays run the risk of inconsistency, both screens had noticeably different color temperatures. I'm sure that LG will fix this before production begins, but it's something it will need to address. 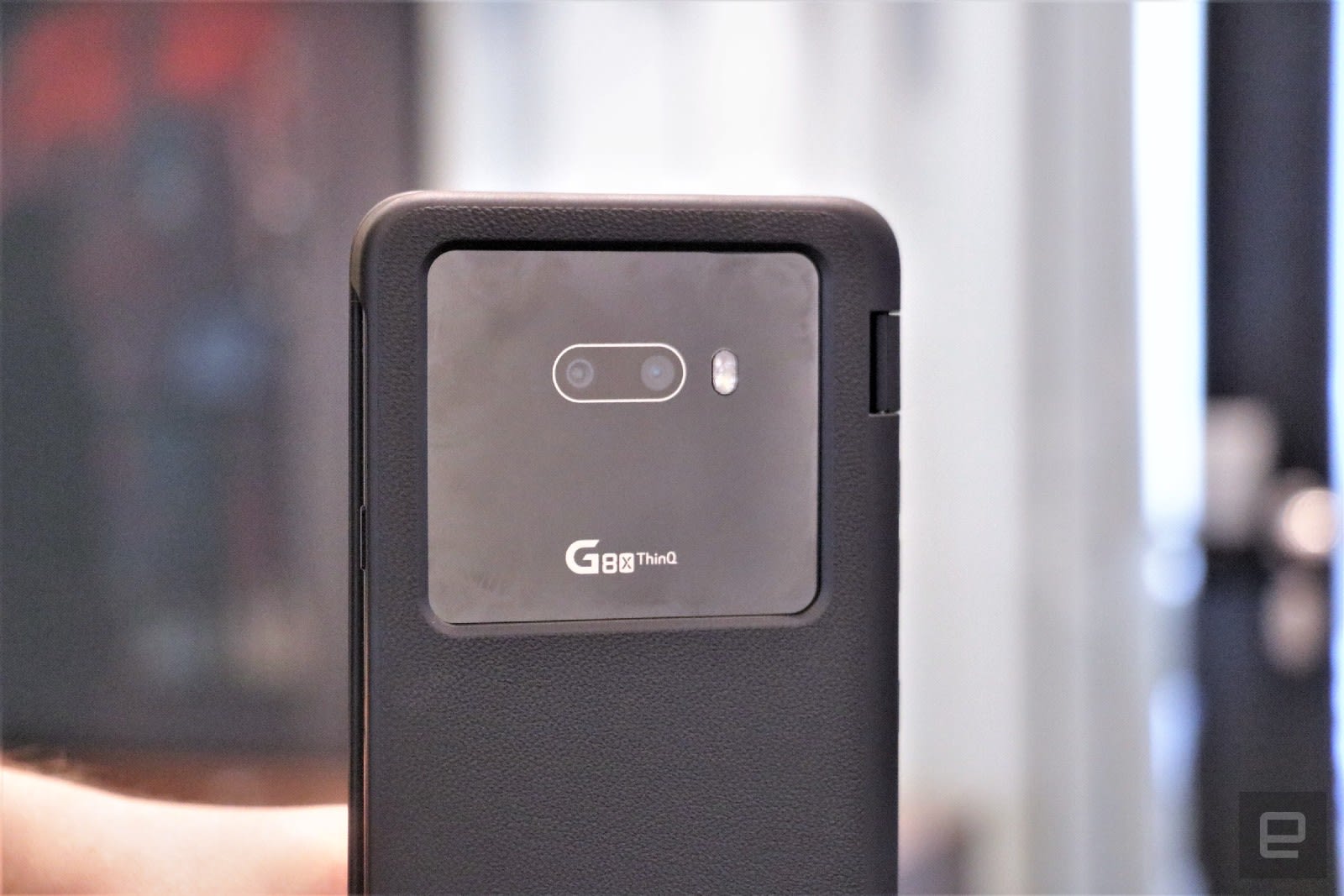 It's also worth mentioning that the mirrored case and the back are both piano gloss black -- the phone will only sell in black -- and are fingerprint magnets of the highest order.

The case has sturdy rubber bumpers and the phone is rated for both IP68 and MIL STD 810G. There's a 360-degree hinge that joins the second display to the first, and you can fold it over to any angle, including back-to-back. That hinge is versatile, but at the cost of making a thick line dividing both displays, meaning you'd never be able to use both screens as one. Sadly, it would be hard to use this as a viable alternative to a Galaxy Fold or Huawei Mate X, with a fold-out screen that's closer to tablet size.

LG isn't the first to flirt with this dual screen idea. You might remember 2011's Kyocera Echo, Sony's Tablet P or the more recent ZTE Axon M. The concept is simple enough to understand: something close to desktop-like multitasking in a smaller form. Instead of flipping between multiple apps, you can pin two open at once to, say, find movie times and message your date.

There are a few features that try to take advantage of the secondary screen With the G8X in landscape mode, you can turn one of the displays into a keyboard or custom gamepad, which you can design for yourself. It's hard to draw conclusions from such a short demo, but the keyboard was a little too large to use with two thumbs, but too small for full-handed typing. I'm sure, over time, you'd get used to it, but I'd probably never write long emails with it.

Web browsing with Whale, LG and Navver's custom Chromium browser that uses full use of both screens, makes a lot more sense. Open Google in one half, and you can click through individual links that are displayed on the other. You can do the same with Amazon, saving you the indignity of scrolling to find your place when you click in, and then back out of, an individual product listing.

There are plenty of other examples, like seeing a Google Map on one side, and Google Street View in the other. You can browse the web on one side while YouTube is open on the other -- which is one way of avoiding having to pay for YouTube Music. And you can flick through the gallery on one screen, with previews popping up on the other.

You can't watch video or browse across both screens, however, because it doesn't look good. LG had a version of Chrome which did render across both screens and the line between the two displays was so thick as to make it difficult to read. The company would much prefer you use the secondary screen as a companion to the first, rather than its missing half. 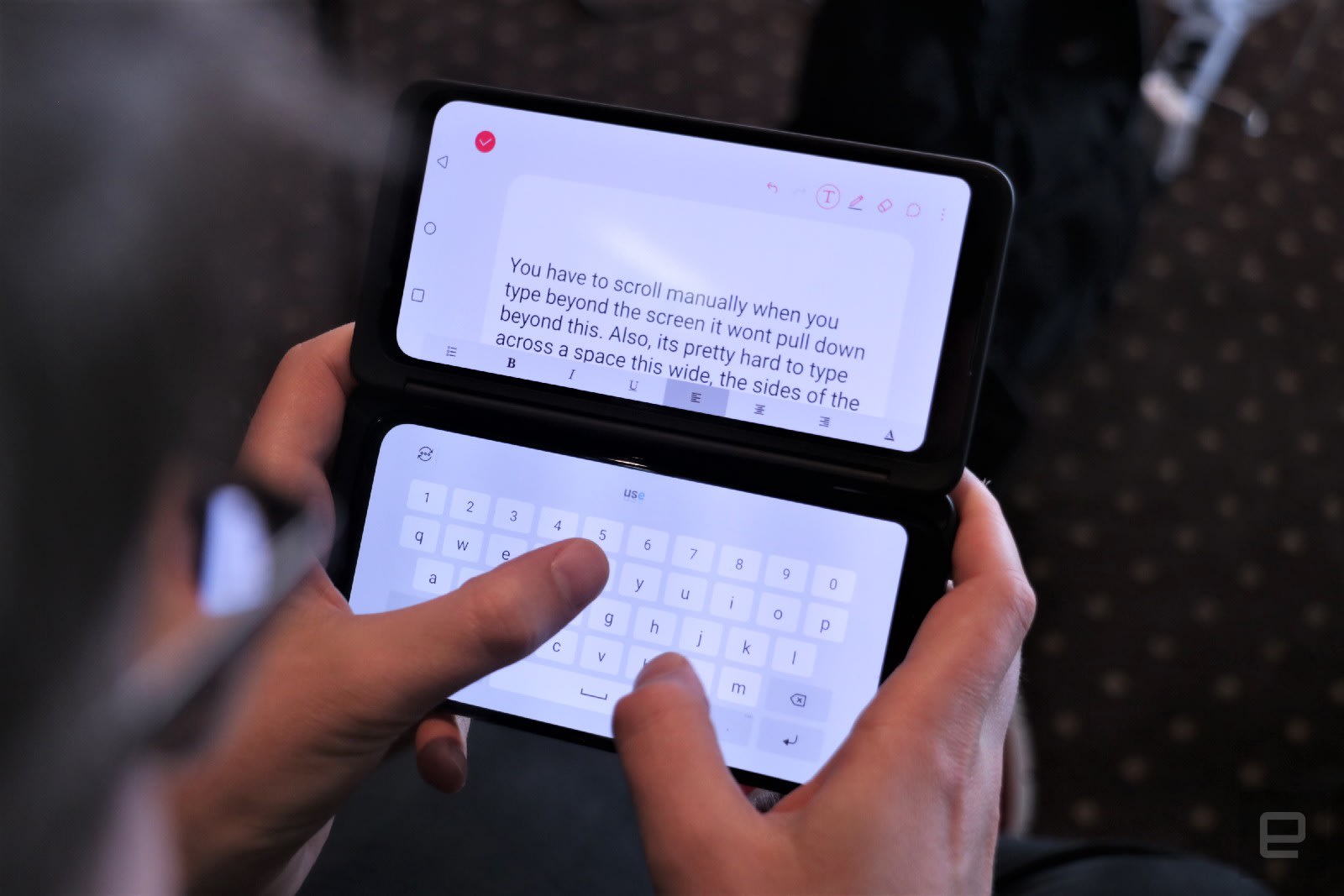 As for the rest of the phone, the G8X has the same Snapdragon 855 and 6GB RAM as its predecessor, but with some key tweaks. The rear fingerprint sensor has been ditched for an optical model that sits underneath the 6.4-inch OLED display, which itself is bigger than the 6.1-inch screen on the G8. Battery capacity has been pushed from 3,500mAh on the G8 to 4,000mAh here, and it'll ship with Android 9 and a new UI, too.

There's a pair of cameras around the back: a 12-megapixel standard angle lens with optical image stabilization (OIS), and a 13-megapixel wide-angle camera. Up front, there's a 32-megapixel selfie camera, but those shots will be compressed to 8-megapixel images for manageability. LG says a combination of optical and electronic image stabilization on the main camera will help eliminate blur and shake from both images and video.

The G8X also features a new video enhancement mode to help users avoid eye strain at night. Normally, when watching clips in a dark room, you just turn down the backlight, but that can image video clips look unusually dim. When you turn down the backlight on the G8X, the video gamma is turned up, so you can see more of the image. Thanks to the tweak, this meant that while the backlight was off, the picture (a clip from Game of Thrones, ha) was still pretty watchable.

LG also threw in an ASMR mode for YouTubers who want to trigger folks' shiver responses in their clips. Select it, and the microphones will be turned up by 10db for those clips you want to shoot of you whispering, rattling a paper bag or stroking a silken garment. I bet you just had a shiver run down your spine as you read that, didn't you? 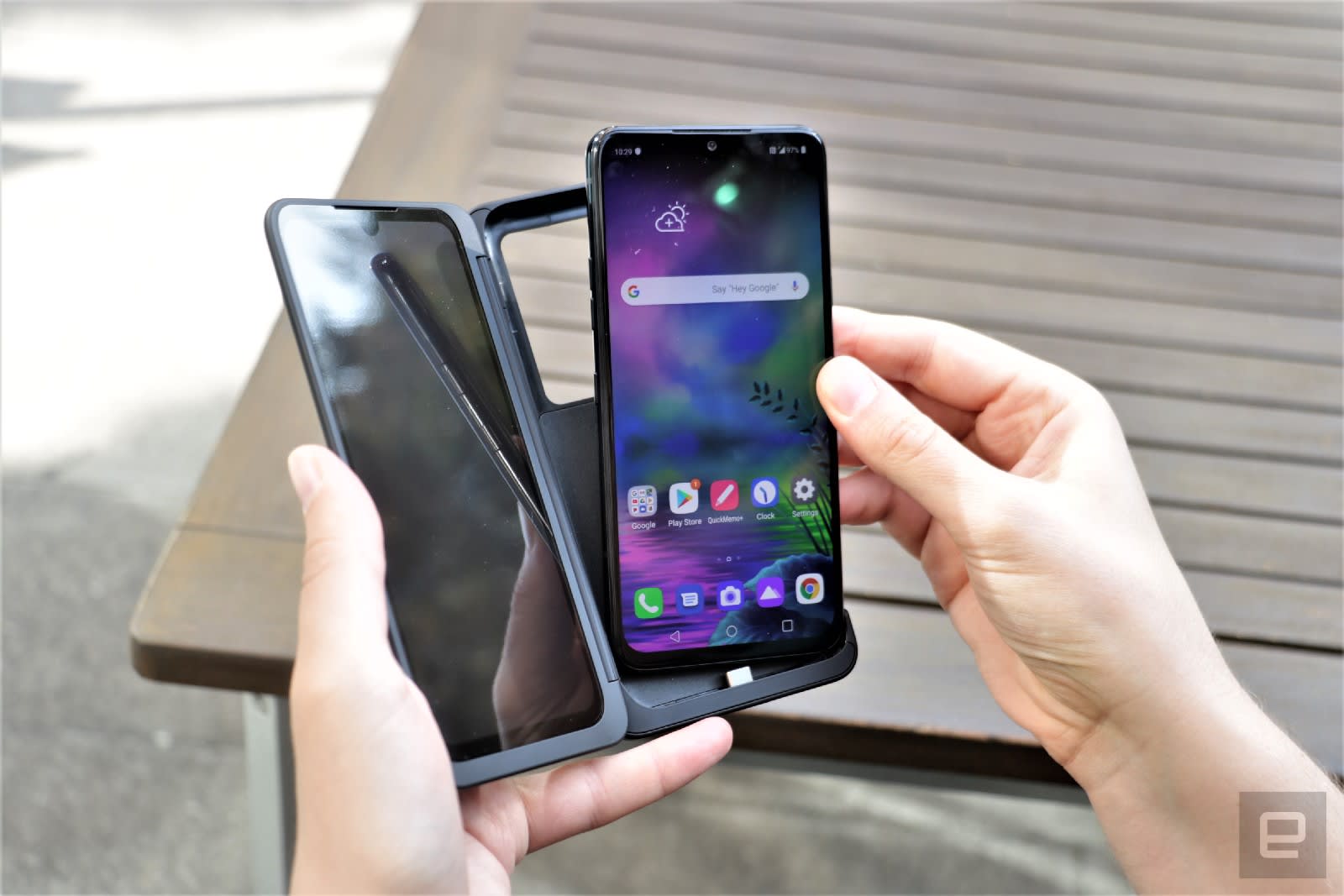 Soundwise, the G8X has the same 32-bit quad DAC as in its predecessor, and a 3.5mm headphone jack, rejoice. LG said that the handset has "perfectly balanced" stereo sound, with a 1.2W driver on both the top and the bottom of the device -- though it wasn't something we could test during our briefing.
The Dual-Screen case doesn't have its own battery, and is entirely reliant on the G8X for power and processing. LG says that the 4,000mAh battery will last 1.4 days with one screen, and 1.15 days running two, although that's dependent on use.

The path to a genuinely useful dual-screen phone is littered with a handful of not particularly good-looking corpses. Compared to the risky, expensive foldable phones, I wouldn't be surprised if LG wasn't a little nervous about building a phone with an integrated second display, and so stuck with this case as a half measure. But given the (relatively) low stakes here, a little daring might have made a big difference. You could forgive a line down the middle for reliability and a price that wasn't bananas.

Instead, the G8X ThinQ looks and behaves like two phones that have been glued together down the middle. It's certainly a useful idea, with plenty of practical use cases, like in-depth Google Maps directions, or messaging and browsing at the same time. But LG hasn't been able to explain, or justify, why this compromise is the right one for practicality. 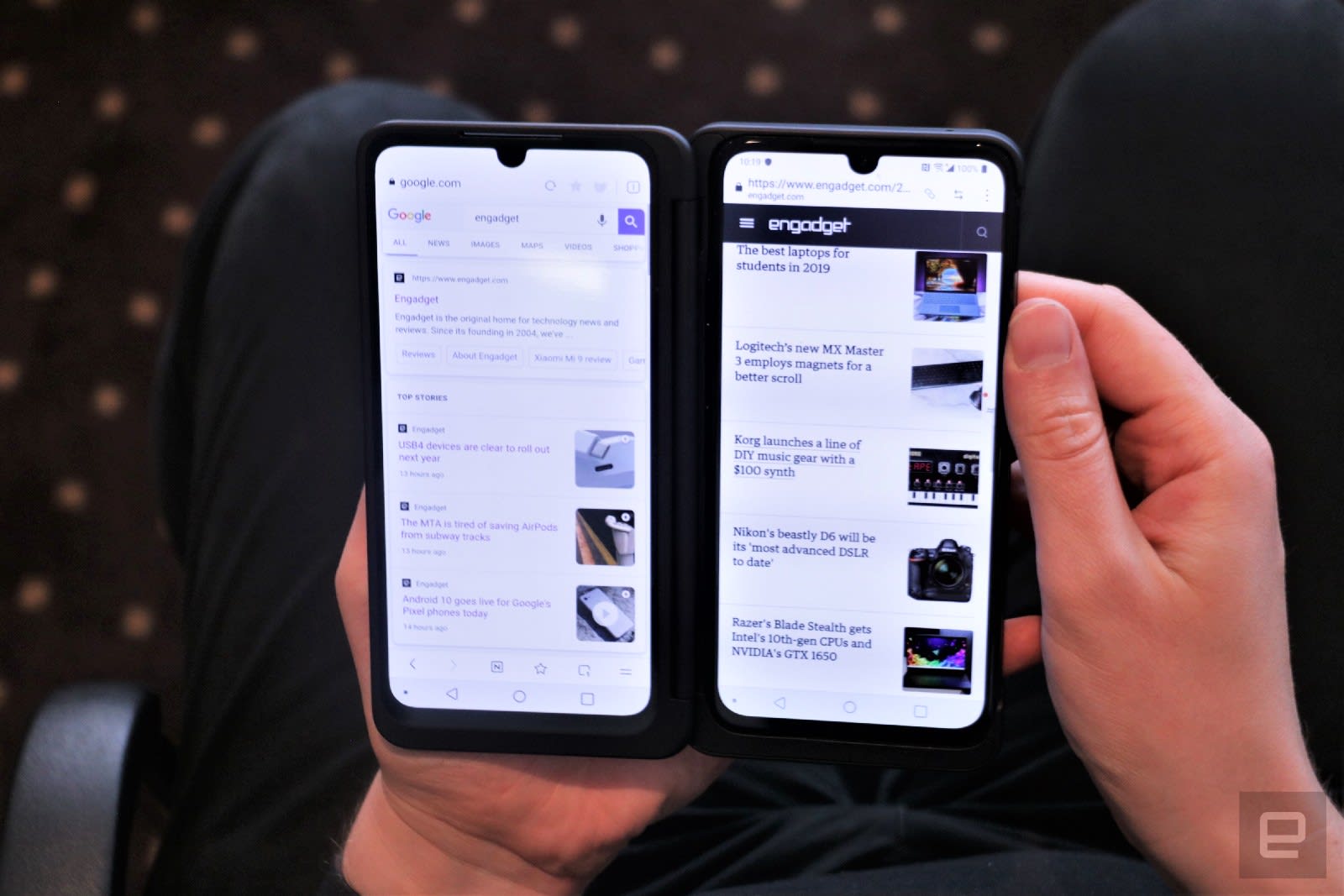 And we don't know how much this thing is going to cost. There's a risk that carriers will decide if it'll be sold as a bundle or split apart, and that's a problem. Make it too pricey and people won't buy it, but unbundle it and people may wonder what the point is of it at all. In an era of unusual phones, perhaps this phone's issue is that it isn't unusual enough.