That's just one of many products in Tile's new lineup.

Tile is so well-known for its Bluetooth trackers that it's practically synonymous with the category. But as useful as they are for finding your stuff, they can only be attached via a keychain or slipped into a pocket. Sure, you could stick them on with an adhesive, but that can be a little awkward and unwieldy, especially on smaller devices. Today, Tile has unveiled a potential solution to that with the Tile Sticker. It retails for $39.99 for a pack of two or $59.99 for a pack of four.

The Sticker is by far the smallest Tile yet. Measuring 27mm in diameter and 7.3mm thick, it's shaped like a tiny disc. That makes it a lot more versatile than the other Tile trackers, and more practical for items like cameras, headphones and remote controls. The Sticker is also waterproof, which makes it ideal for sticking onto outdoor gear like skateboards or coolers.

As its name suggests, you just peel the plastic off the back for it to adhere. Tile partnered with 3M to create the adhesive, which was designed to bond to most metal and plastic surfaces. According to Tile, if the Sticker is placed on a clean, flat surface, the bond should last three to five years. I placed a Sticker on my laptop, after which I tried to remove it by pushing and pulling on it a few times, and it didn't budge even the slightest. 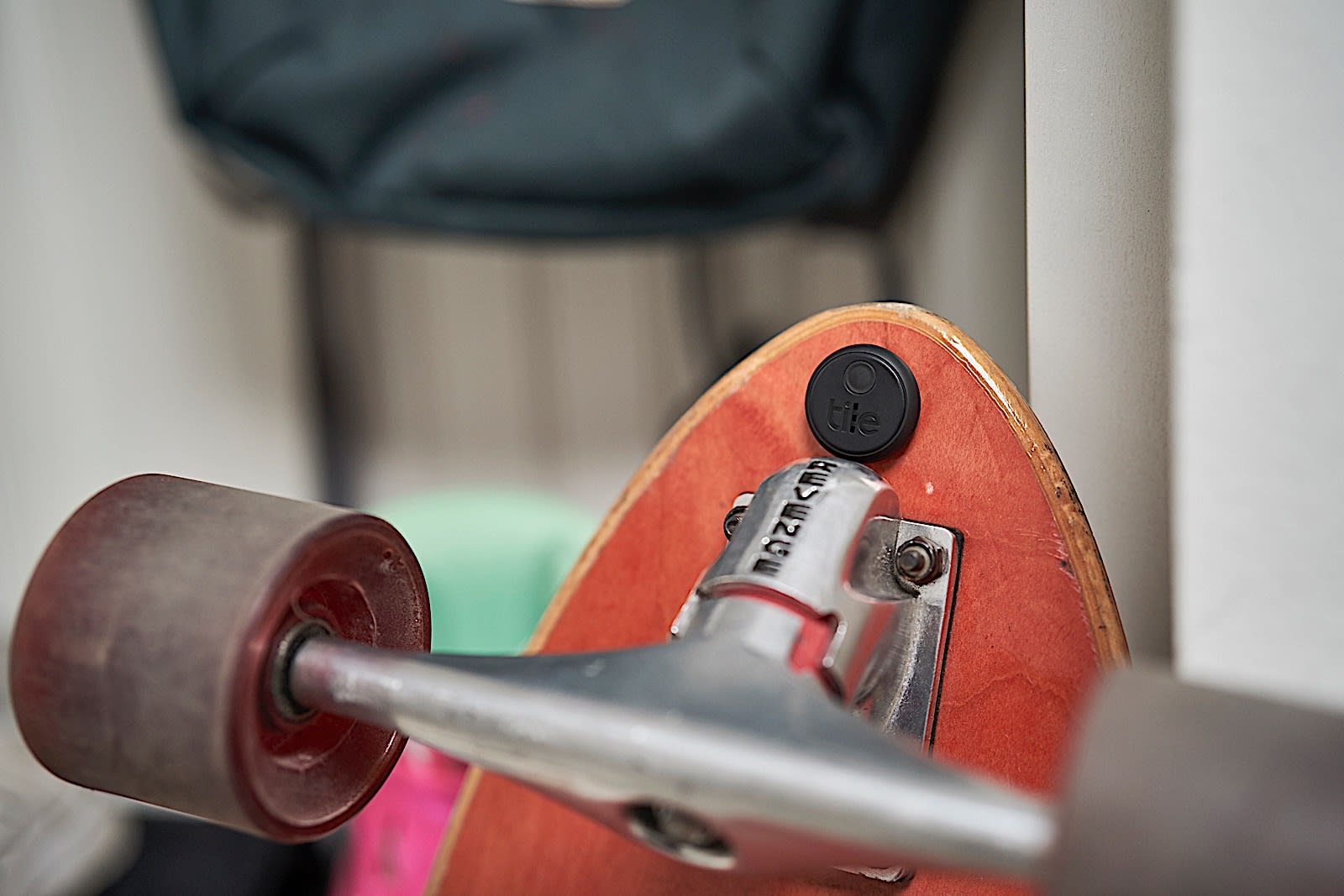 If you do want to remove it, Tile says you just have to yank on it really hard and it'll eventually come off (much like you would 3M hooks that you have on the wall). I decided to test this with the Sticker on my laptop. I dug my nails and fingers around the sides and pulled really hard several times, almost to the point where I was afraid I would damage my laptop. Finally, the Sticker did release, with only a tiny bit of adhesive residue left on the surface. Tile recommends you use another adhesive backing on the Sticker after removal, but mine still had enough adhesive left that I could reuse it.

As mentioned earlier, the Sticker is also the most affordable Tile product at around $15 or $20 per tracker (depending if you buy a 2- or 4-pack). Like other Tiles, it has a three-year battery life and a 150-foot range (the maximum distance from which you can detect it with your phone). 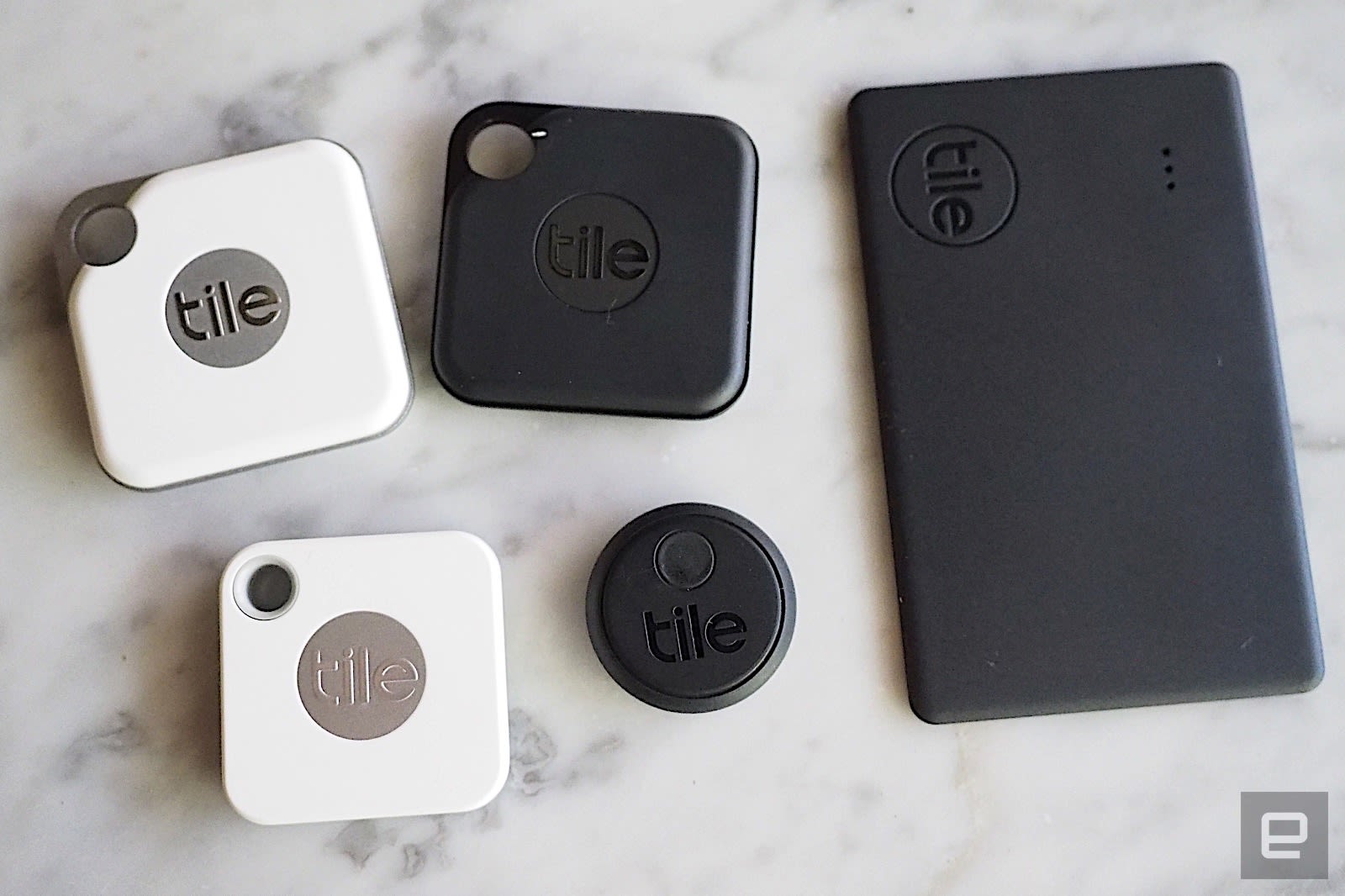 Along with the new Tile Sticker, the company announced a refreshed lineup as well. The biggest change was to the new Tile Slim, which is now in a credit card style design (the previous version was simply a wider and flatter version of the original Tile). This newer iteration is a much better fit for wallets, luggage tags and ID badges. It has a 200-foot range, which is double that of the original Slim. It also apparently has twice the alert volume, has a three-year battery life and is waterproof. The Slim costs $29.99 for a single unit.

Next up are the new Mate and Pro models, which are slightly improved from their predecessors. Design-wise, the Mate is practically unchanged, while the new Pros no longer have a textured surface (also, instead of being called "Sport" and "Style," they're simply just black and white). The Mate now has a 200-foot range, while the Pro now has a 400-foot range. The Pro also apparently has the loudest ring of the bunch. Both the Pro and the Mate are water-resistant -- not waterproof like the Sticker and the Slim -- and have replaceable batteries, which the others do not. The Mate costs $24.99 while the Pro is priced at $34.99 per device. 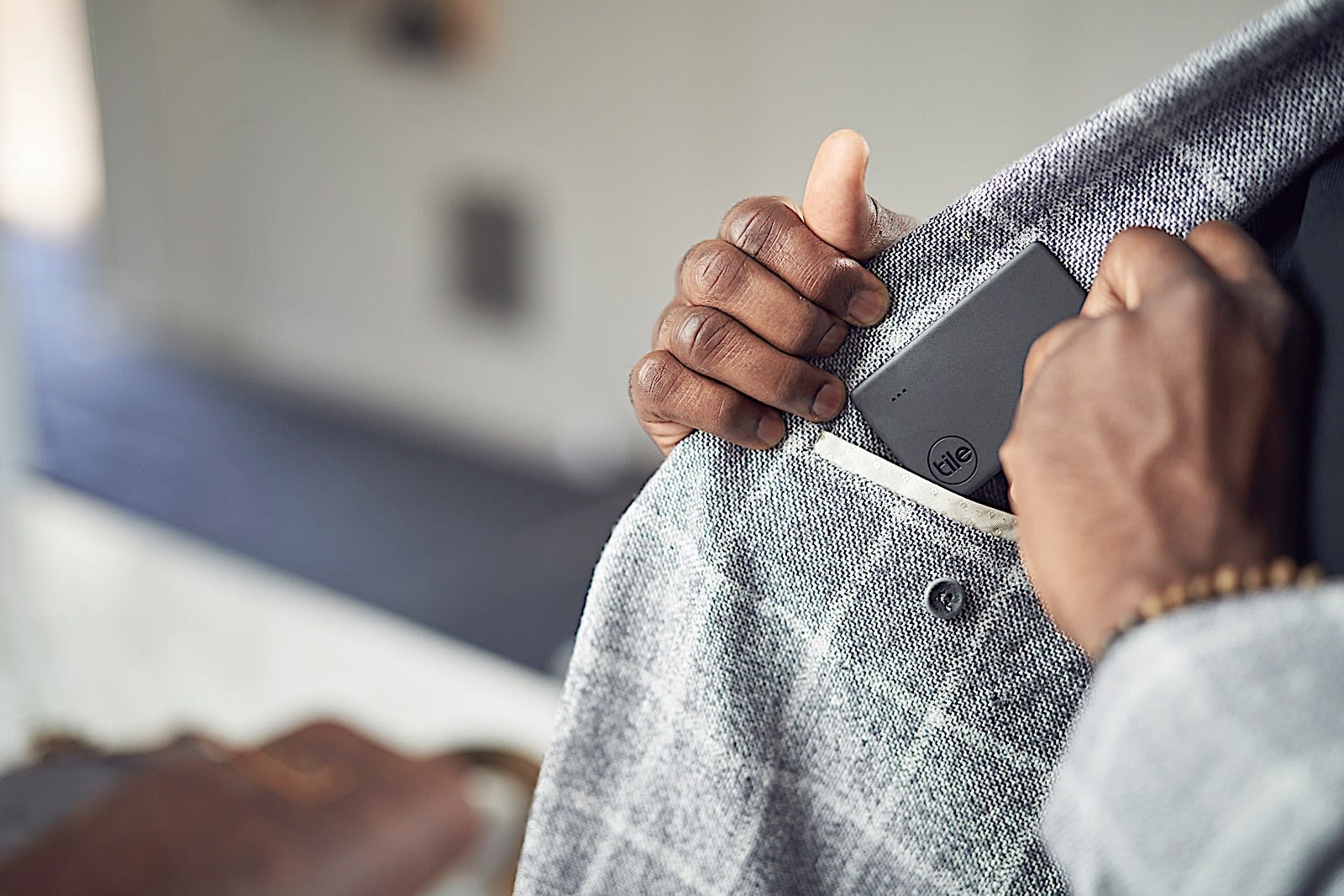 As a reminder on how Tile works, on top of using Bluetooth to help you find your stuff, it uses a crowd-finding feature where other Tile app users can ping the whereabouts of a Tile that's out of Bluetooth range. It's this "crowd-sourcing" feature that sets it apart from just a regular location tracker.

That said, Tile may be facing some tough competition in the not-too-distant future. There have been rumors that Apple is working on location-tracking hardware of its own. But instead of using Bluetooth, it'll apparently utilize a tech called ultra-wideband (UWB), which is said to be much more precise -- almost a hundred times more accurate than Bluetooth. The only caveat is that UWB only works if both devices have the tech, but seeing as the new iPhone 11s do have it, there's a possibility that this rumor could be true. Even then though, the rumored Apple tag will likely only work with Apple products, while Tile works with both Android and iOS. There's also no telling just how much it would cost.

The new Tile products are available starting today at Tile.com as well as major retailers like Amazon, Best Buy, Target and others. They're also available in combo packs: You can get a Tile Essentials bundle with two Tile Stickers, one Tile Slim and one Tile Mate for $69.99; a Pro Combo 2-pack for $59.99 or a 4-pack for $99.99; a 4-pack Mate for $69.99; and a Tile Mate/Slim Combo with two Mates and two Slims for $74.99.

All products recommended by Engadget are selected by our editorial team, independent of our parent company. Some of our stories include affiliate links. If you buy something through one of these links, we may earn an affiliate commission. All prices are correct at the time of publishing.
View All Comments
Tile’s latest Bluetooth tracker is a tiny, waterproof sticker