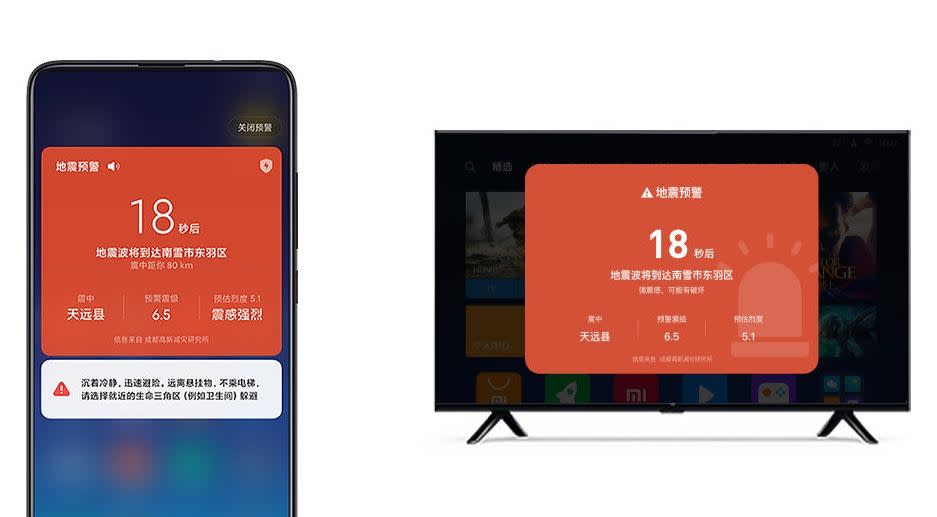 Xiaomi smartphone and set-top box owners in China will soon have access to potentially life-saving early earthquake warnings right on their devices. At its annual Mi Developer conference in Bejing, the Chinese electronics company said its MIUI 11-based smartphones and Mi TV set-top boxes now include an early earthquake warning feature. Xiaomi claims the system is able to deliver warnings "seconds to tens of seconds" before an earthquake arrives. The company has rolled out the feature in China's Sichuan province first, which is one of the country's more earthquake-prone regions, and plans to make it available to all Chinese users in the future.

According to TechCrunch, Xiaomi told Mi Developer conference attendees the feature is the first of its kind globally. However, as with most new technologies, there are prior examples. Following the deadly Tōhoku earthquake and tsunami in 2011, Apple added native earthquake alerts to iPhones in Japan. In the US, the Federal Emergency Management Agency (FEMA) tested its Wireless Emergency Alert (WEA) system last year, which works on both iOS and Android devices. Xiaomi says it's willing to share the tech with other companies.

Correction 10/20 10:45AM ET: An earlier version of this article stated that Xiaomi's earthquake warning feature could work without a data connection. A spokesperson for the company has clarified that it does need a working internet connection.

In this article: earthquake, gear, Mi TV, MIUI, mobile, safety, xiaomi
All products recommended by Engadget are selected by our editorial team, independent of our parent company. Some of our stories include affiliate links. If you buy something through one of these links, we may earn an affiliate commission.