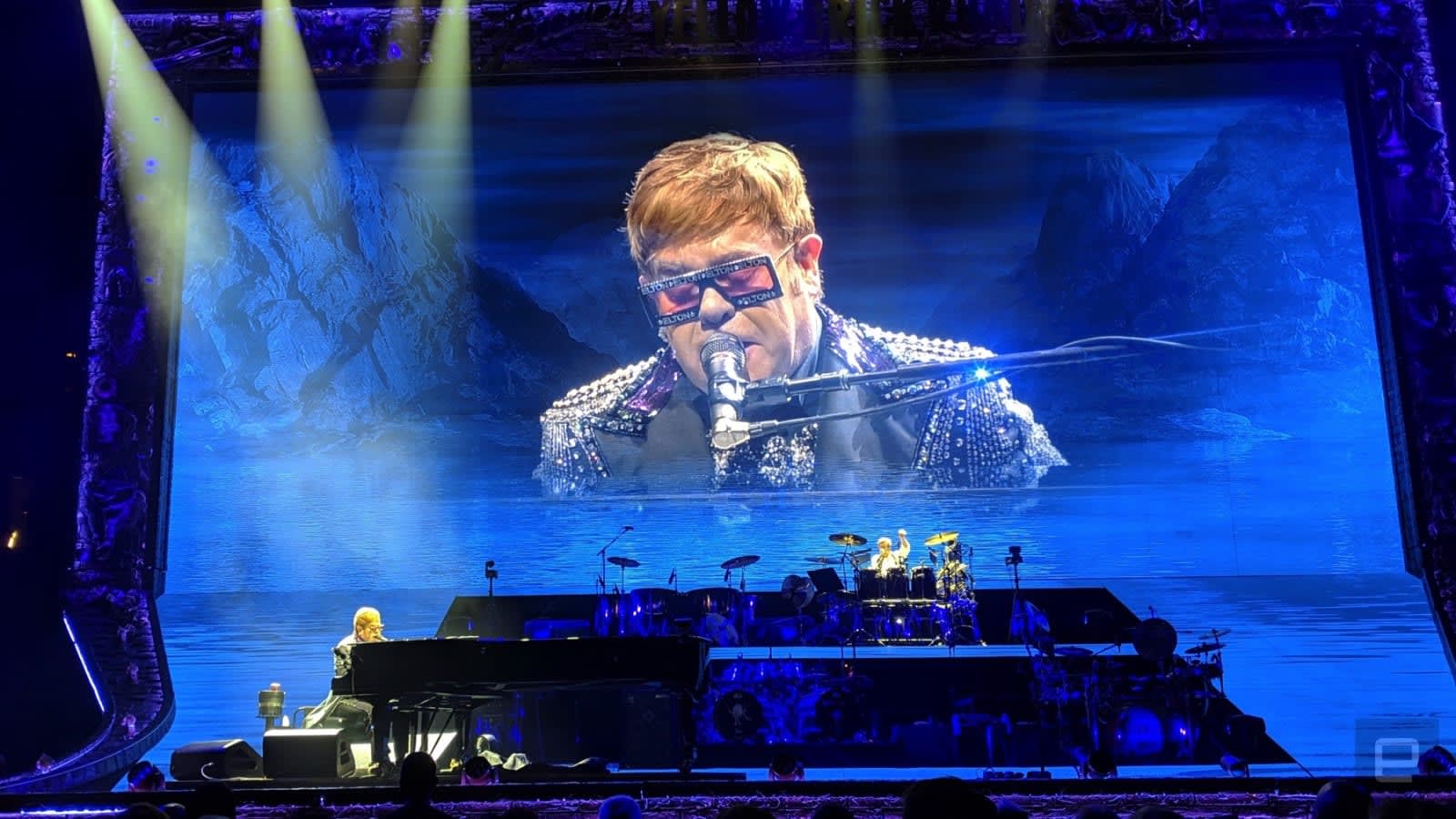 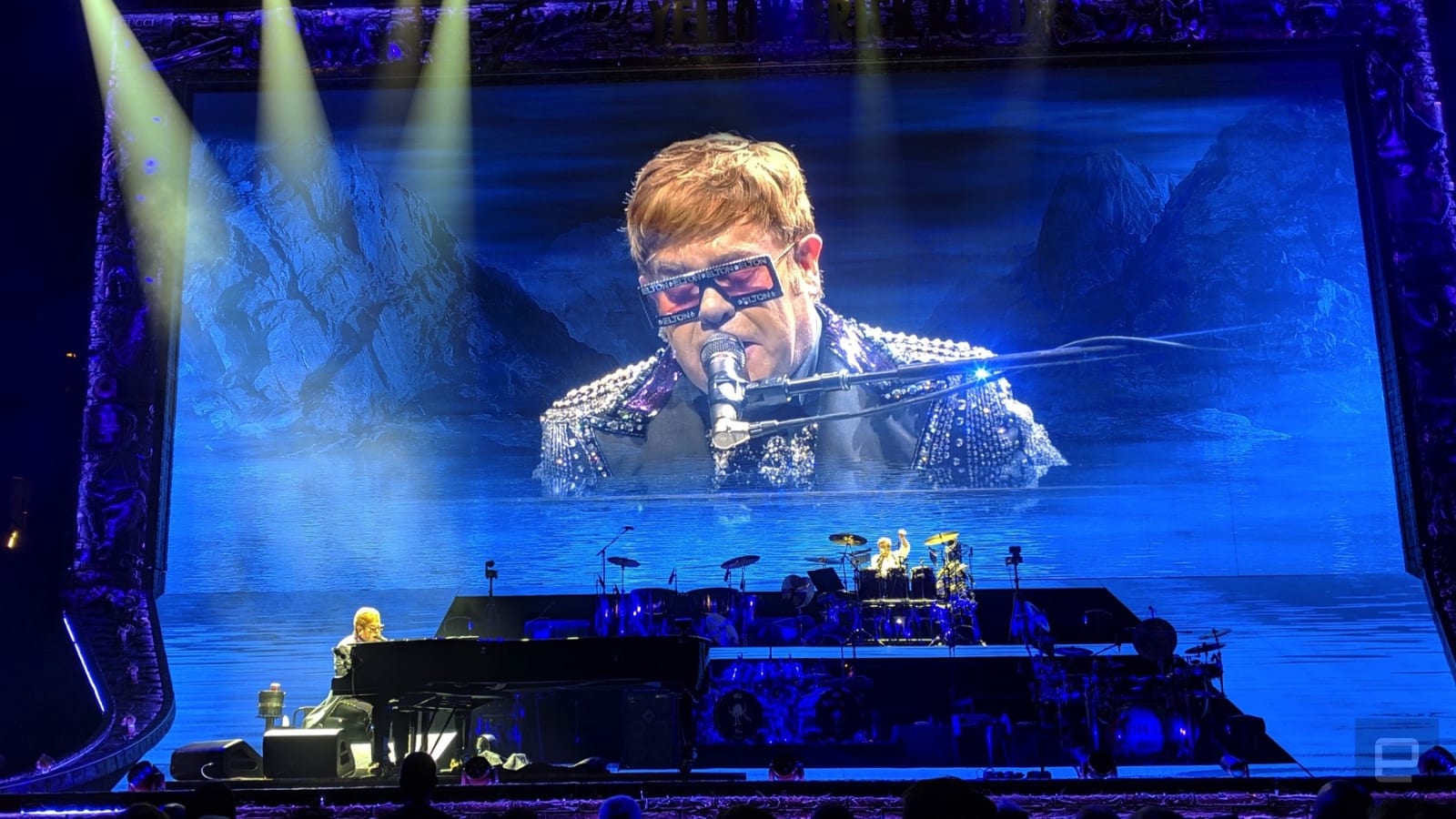 One of the worst concerts I've ever attended in my life -- in terms of pure sound quality -- was at Barclays Center. I get that arena shows are never going to be known for their top-notch acoustics, but the concrete cavern that the Brooklyn Nets call home is particularly bad. It's why I chose it as the venue to see Elton John and test out Peex Live, a service that promises to deliver an ideal music experience no matter how bad your seats (or sound engineer) are.

There's a catch though: You have to wear headphones at a concert. That's about the most unintuitive thing I've ever heard of. Skepticism aside, the tech behind Peex is interesting. There are two main pieces of the puzzle. First, Peex takes a raw audio feed from the stage and mixes it down at its own dedicated console (separate from the house mix). Here the audio is split into individual tracks -- in the case of the Elton John concert, it was broken down into percussion, bass, keyboards, guitar and Elton (vocals and piano).

That audio is then beamed out to the audience using the 5GHz band. Obviously this means there's potential for interference from things like WiFi, but Peex says it works with venues to clear up the necessary channels. Plus, since information is only flowing in one direction, bandwidth is less of an issue. It's more like a radio broadcast than WiFi. 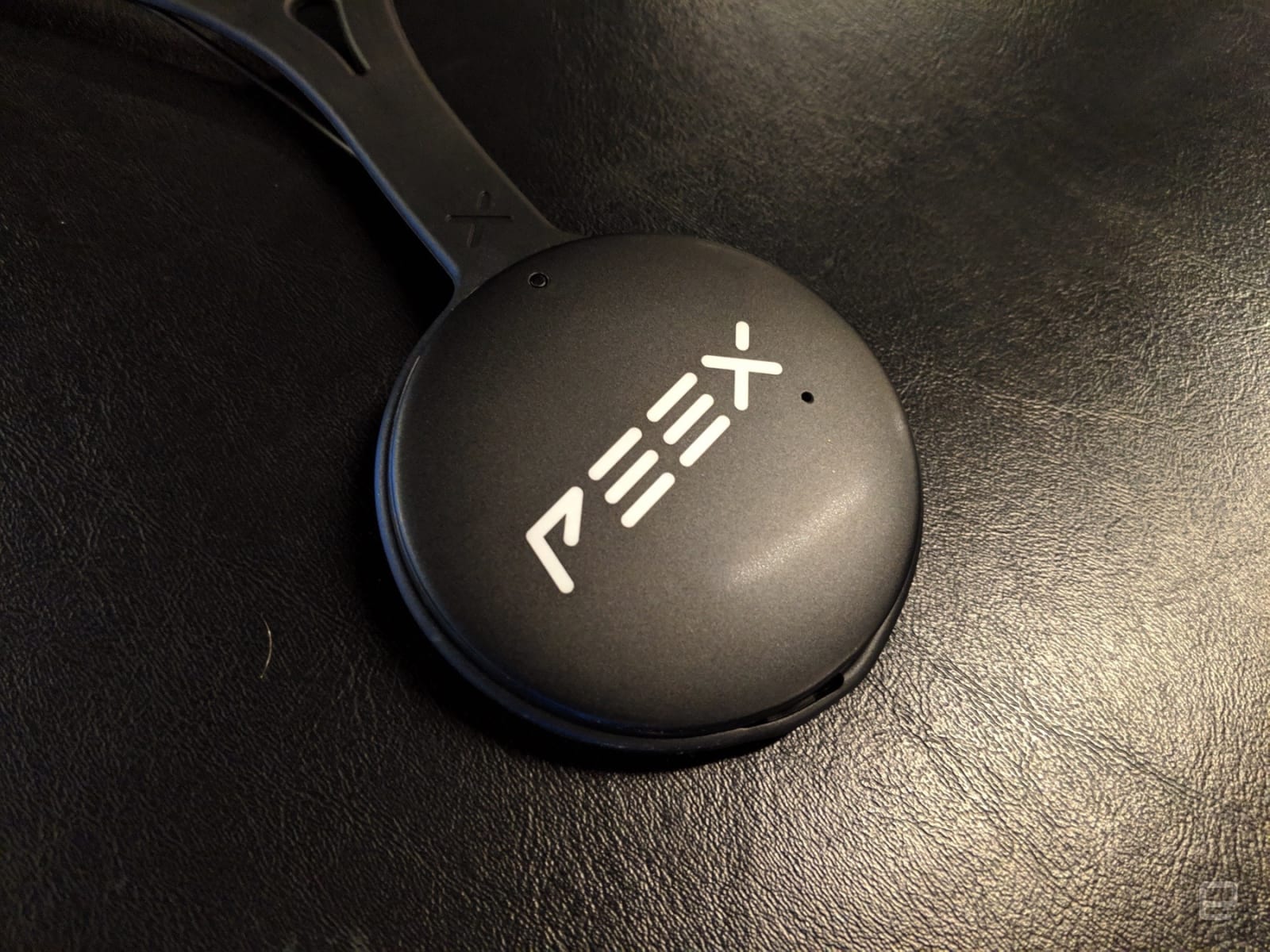 The second part of the equation is a small puck you wear around your neck called the rX. The rX is what receives the audio, pushes it out through a pair of headphones and talks to an app on your phone via Bluetooth.

On the front of the puck is a small hole for a microphone, which is used to pick up the sound coming from the stage in order to sync the feed in the headphones. Physics means the audio data actually reaches the rX before the sound coming from the speakers hits you. We're talking a few hundred milliseconds at most, but it's enough that it would be extremely irritating if it were pumped into your headphones live. So the mic is an absolutely essential part of the setup here. This is also why the headphones connect directly to the puck using a 3.5mm headphone jack. (Remember those?) If the feed went through your phone first or even over Bluetooth, it would introduce too much latency and the Peex would never be able to sync up the audio.

The mobile app's primary purpose is to allow you to customize your mix. You can turn each of the five tracks of audio up or down, or even solo them. This is great if the house engineer doesn't have the guitars turned up loud enough for you or if the bass is getting lost up in the nosebleeds. It could even potentially save the show if the engineer is having a really off night. If you've knocked things out of whack, it's easy enough to slide the virtual faders back to the middle position, though a "restore default" button would be handy. All of this is, objectively, pretty neat.

But what matters is the experience of using it at a concert, and I have to say that despite my skepticism, I was pretty impressed. For one, there is absolutely zero latency. The audio was synced up perfectly the entire time, no matter where I was positioned in Barclays: Mid level directly opposite the stage, upper level to the side, down on the floor, even behind the stage, I encountered zero hiccups. I only ever lost signal when I wandered out into the halls to change locations. The mixer app is clean and functional, though it did crash on me in the middle of "Rocket Man," forcing me to pair with the rX again, which can take some time.

Now, I'm not gonna lie: It was definitely weird to be wearing headphones at a concert. And I'm not sure I'd ever get used to it. But it wasn't as isolating or strange as I feared. The earbuds Peex hands out are designed to let in a decent amount of ambient noise. You can in theory connect any wired headphones you want to the rX, but I'm not sure I'd recommend it. I brought two pairs of headphones with me -- a pair of Sony MDR-7506 studio monitors and a set of Sennheiser CX300 II earbuds -- but I ended up leaving them in my bag. The over-ear Sonys simply would have removed me too much from the concert atmosphere, and the Sennheiser buds wouldn't have delivered a much different experience than the Peex pack-ins.

See, the balance of ambient noise and headphone audio is key to the success here. Directly opposite the stage, with the mixer tracks all set to about halfway, the effect of the Peex was subtle but noticeable. It was able to add some definition to the bass frequencies, which get muddy pretty quickly the further you are from the stage. (Not to mention that reflections off the walls and jumbotron only make things worse.) And it did so without making me feel like I was just listening to music on headphones -- I still felt like I was seeing a live band.

The same was true in the cheap seats on the side of the stage. This is where I suffered through Television, the Unicorns, Dan Deacon and Arcade Fire (all bands that I love) five years ago. The sound at that show was what you might expect out of a middle school auditorium... if you were out in the hallway. Now, to be clear, the audio was much better at Elton John, even without the Peex. But it still helped clean up some of the reflections that are unavoidable when you're right up against a concrete wall.

Things started to fall apart slightly when I got to the extreme ends of the spectrum. Behind the stage, where I was staring at the back of a giant video screen with no speakers facing me, the illusion was shattered. Here it was obvious that I was listening to music on headphones. As the quality of the sound in the arena got worse, the disparity with what was coming through the Peex became clearer. And suddenly it felt like I might as well be listening to a live album at home. To be fair, though, there were no seats behind the stage at the Elton John show, nor are there at most concerts. This was purely for demonstration purposes. 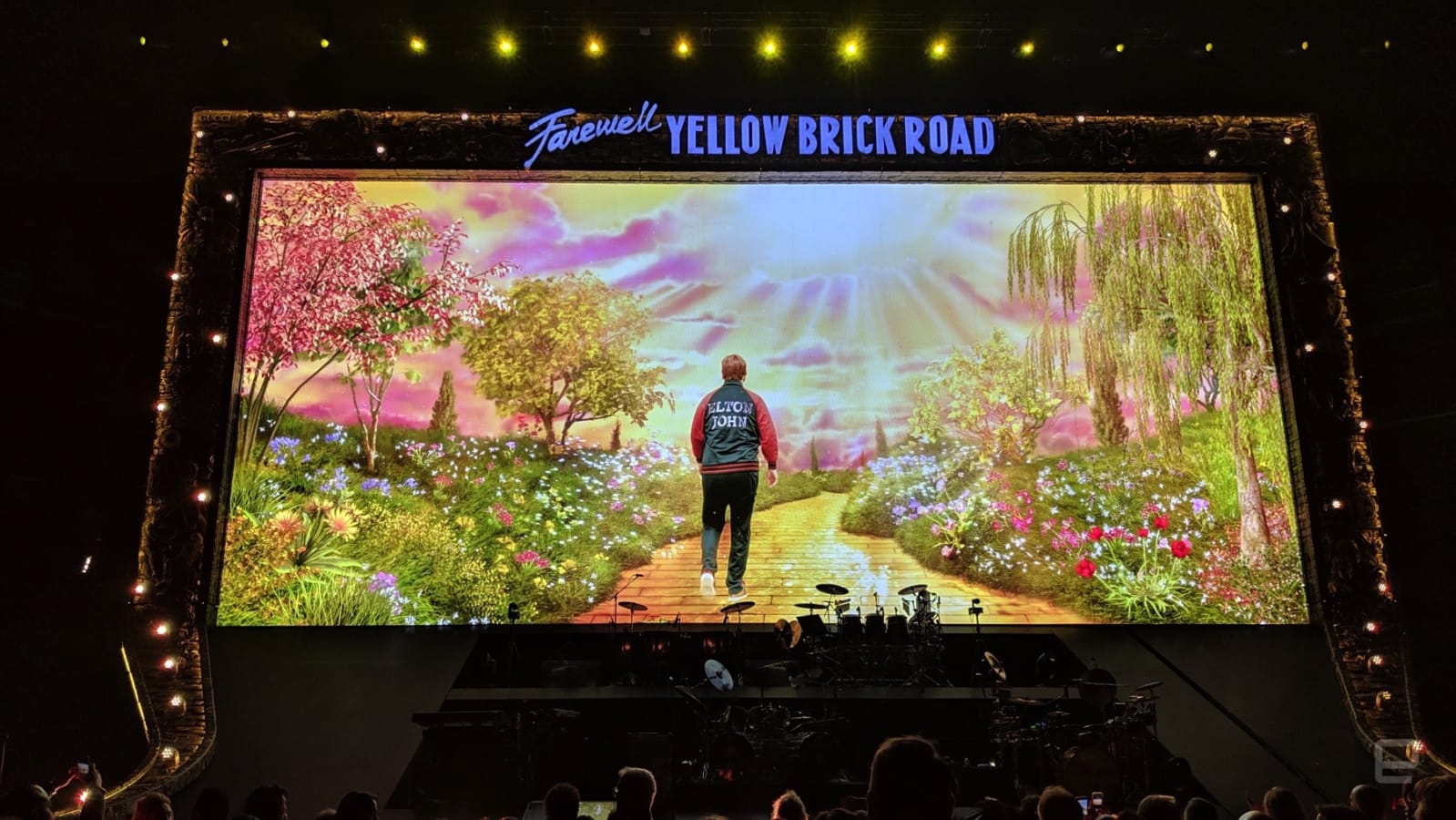 Down on the floor, it was a similar story. Having one of the best seats in the house means enjoying some of the best sound in the house too. Frankly here, there wasn't much need for the Peex. And in a crowd of people dancing and singing along to "Saturday Night's Alright for Fighting," wearing headphones did feel a little isolating. (I'll admit that I took them out here.)

There is still one big unanswered question right now, though, and that's how much the Peex will cost to rent at a show. Whether or not it succeeds will depend on where the company lands with pricing. If it's not any cheaper than simply springing for a better seat, then it's hard to see a lot of people opting to rent headphones at a show. The company is going to have to figure it out soon. While the Peex is currently limited to VIPs and press, the company plans to start opening up to more people at more venues. (Though it was a little vague about when exactly.)

Perhaps its best chance of success, though, is with outdoor festivals. Anyone who has attended Rock the Bells or Bonnaroo can tell you that sound at these giant events is generally atrocious. And since often tickets are general admission, there isn't the lure of buying a better seat to compete with.

It still might take you out of the moment to pop in a pair of earbuds while you're jostling for position at Randall's Island or Union Park. But if your number one priority at a concert is sound quality, then it might be worth the trade-off.

In this article: art, audio, av, barclays, concert, elton john, entertainment, farewell yellow brick road, gadgetry, gadgets, gear, hands-on, live music, music, peex, peex live, rx
All products recommended by Engadget are selected by our editorial team, independent of our parent company. Some of our stories include affiliate links. If you buy something through one of these links, we may earn an affiliate commission.