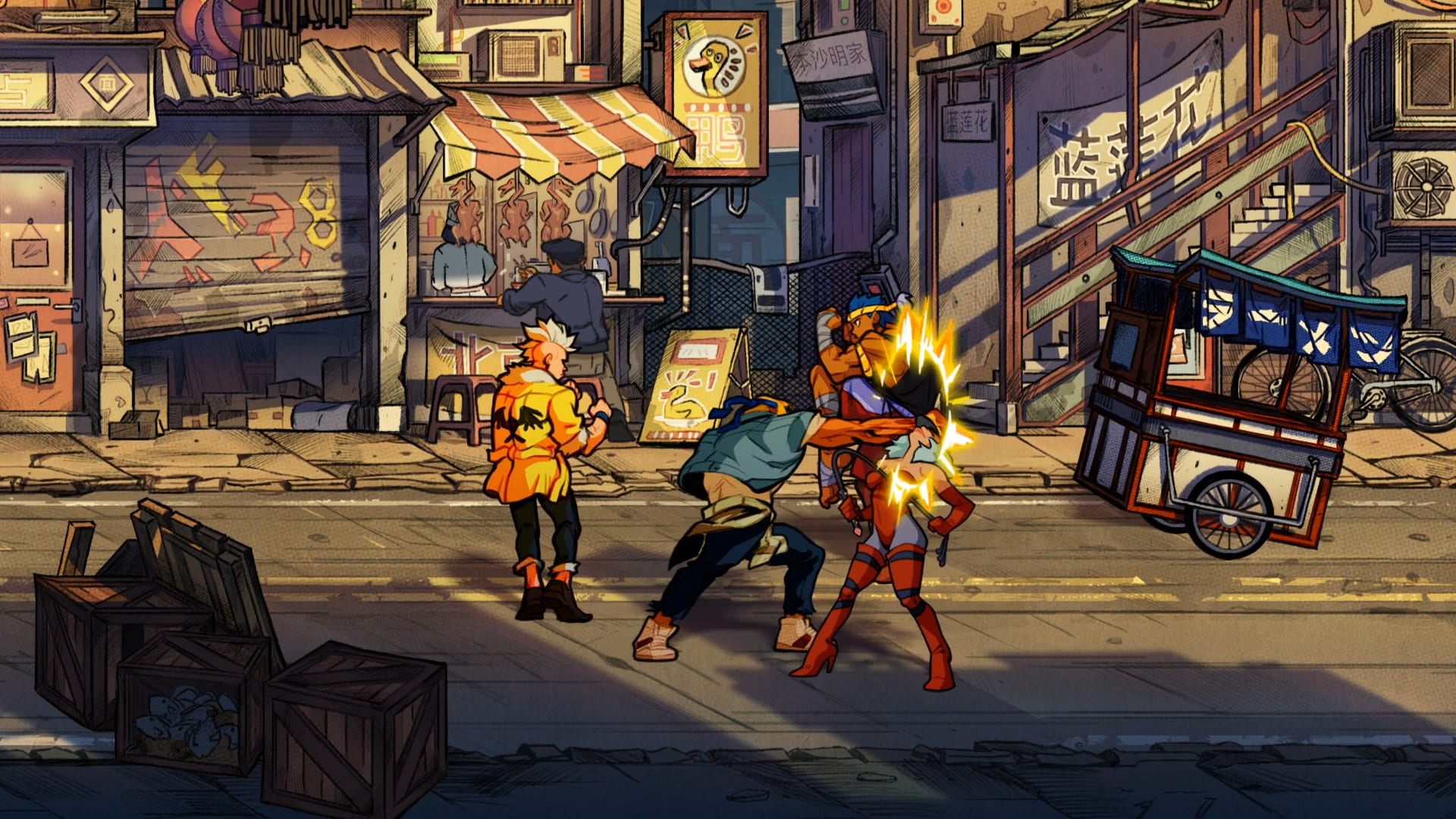 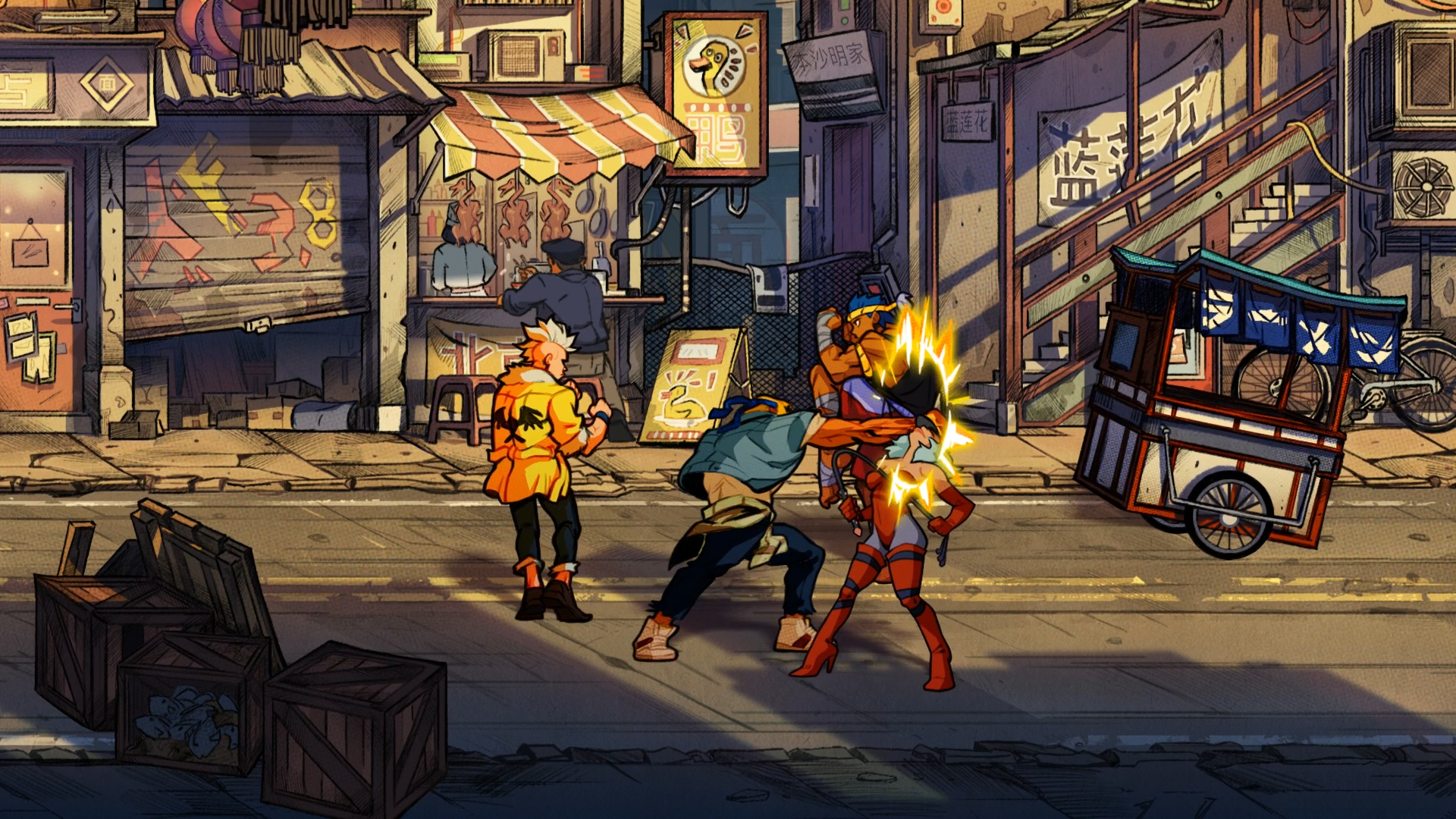 Streets of Rage 4's announcement landed with a bit of a thud. The original trilogy of Genesis games is beloved, and for many remains the benchmark for the genre. It's now been 15 years since Streets of Rage 3, and a teaser trailer for a new game showing a cast of hand-drawn characters against some decidedly modern music looked more like a Saturday morning cartoon than a faithful new chapter. While many were excited for the return, a vocal group voiced their concerns.

The gameplay teaser that followed half a year later showed a 2D game that seemed to play like the originals, but the art style still didn't seem "right." Why is the art such a massive departure? Would the game feel as direct and satisfying to play? Those were the kind of questions I was (silently, unlike many fans on social media) asking myself.

Then came the musicians. Last month, the game's publisher Dotemu announced that Motohiro Kawashima and Yuzo Koshiro, whose contributions to the original soundtracks are legendary, were on board, joined by Hedeki Naganuma (Jet Set Radio), Keji Yamagishi (Ninja Gaiden) and Yoko Shimomura, who's most famous for the Kingdom Hearts series (before that she had worked on music for Final Fight, Street Fighter II, Legend of Mana and many others). To call it an all-star group would be an understatement. At the very least, then, this game would sound great.

So, I came to my 30-minute demo at Gamescom with some trepidation. In all honesty, I expected to hear some great music scoring an underwhelming tribute to a long-dead game series. I was wrong. Streets of Rage 4 plays, and looks, like a dream.

The game is being developed by three studios: Lizardcube, who brought Wonder Boy back to life in 2017 with The Dragon's Trap, is doing the artwork; Guard Crush Games, responsible for the hilariously good XBLA beat-'em-up Streets of Fury is lending its engine and handling the programming; publisher Dotemu is assisting in game design and, naturally, publishing.

It took just a few seconds playing Streets of Rage 4 for me to understand how much love has gone into this game. The characters are hand-drawn, but precise, mirroring the feel of the original pixel art, and everything is richly animated. It still has that saturday-morning-cartoon feel, but with a frame rate 12 times higher. That's a style that publisher Dotemu seems enamored with: the Wonder Boy remake Lizardcube worked on is understandably comparable, and Windjammers 2 similarly supplants decades-old pixel art with sharp hand-drawn lines.

Then there's the background art. While the classic Streets of Rage games had gorgeous, but fairly static backdrops, 4's stages are teeming with life. In the level I played, there were people eating at roadside bars, flies swirling around trash, pots boiling on stoves, cherry blossoms falling on wet paving that reflected the city behind -- it's really quite breathtaking when you stop and admire the scenery. Not that there's much time for that.

Streets of Rage 4 fills your screen with multiple foes to kick, punch and throw aside. It follows the formula of the originals, introducing new enemies as solo threats before adding them to the pool of characters you'll face off against in huge brawls. This gives you a little breathing room to learn each opponent's patterns and quirks, and ensures a continually increasing difficulty level through the game.

The controls will be familiar to veterans, and easy to pick up for newcomers. You could feasibly play this game with a Genesis controller: There's an attack button, a jump button, a 'special attack' button and that's it. Specials are, as in 2 and 3, more like moves in Street Fighter than the original game's screen-clearing cop car. Rather than arbitrarily limit how often you can do a special, the moves take away some of your health, which can be replenished with regular attacks until you get hit. There's also a leaping special, which can be pulled off, appropriately, by pressing jump and special at the same time. 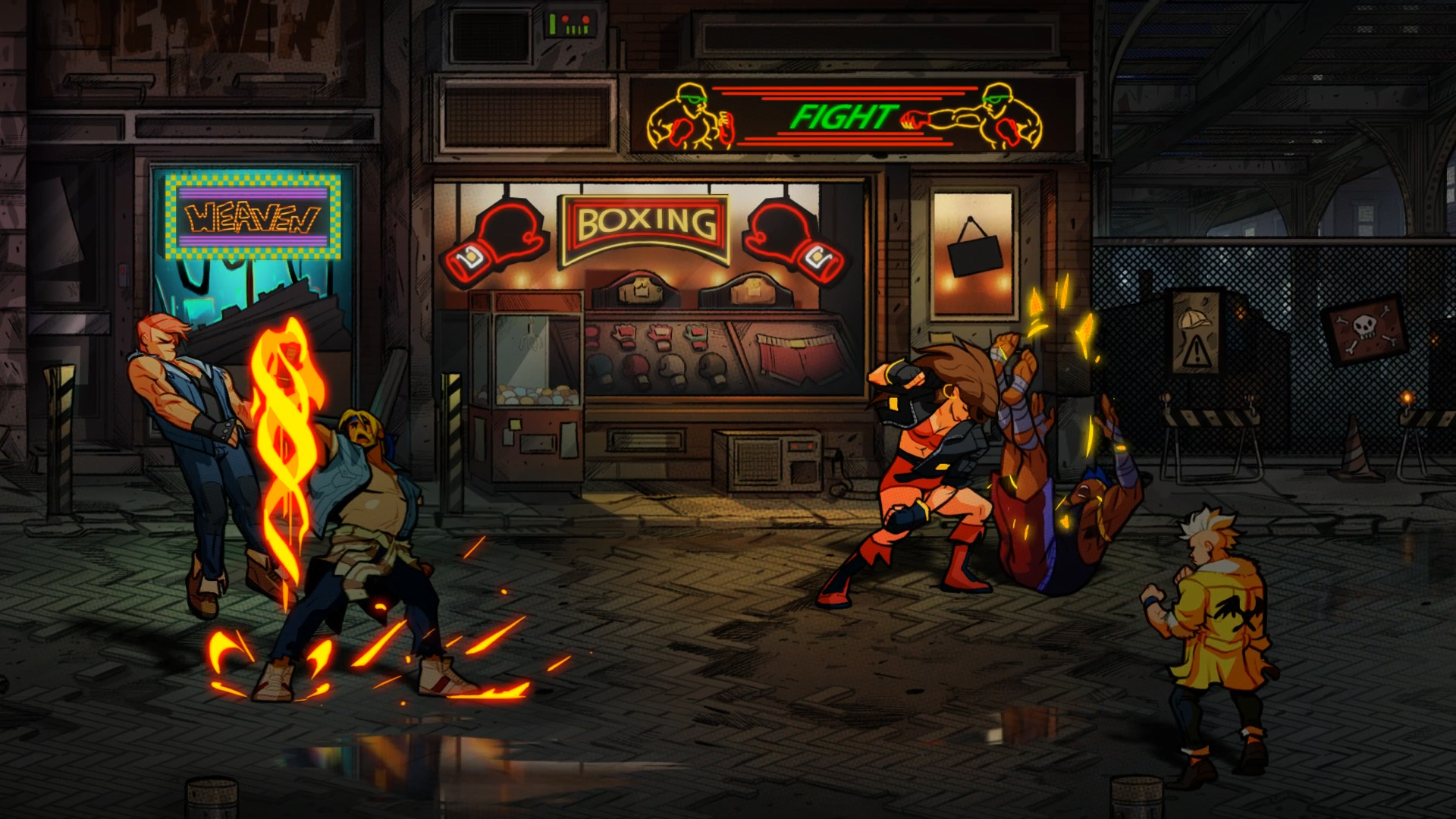 Streets of Rage 4 feels tight. The controls are responsive, there's a sufficient weight to attacks and the same patterns and techniques I used decades ago worked as expected. The special system is nicely balanced, encouraging you to risk your health in the hope that you can evade hits until you regain life. There are also some environmental hazards, like electricity, acid and fire, which should add some variety and strategy to fights. There's no throwing out the rule book here, just little tweaks and changes, as you'd expect from a sequel.

At present there are three playable characters, although that could increase before the game's eventual launch. Series mainstays Axel and Blaze are joined by a new character named Cherry. She's the daughter of Adam Hunter, who was the final playable character from the original game, and had cameos in later games. Cherry plays a bit like Skate from the second game (which tracks, as he's her uncle) and is faster-but-weaker than the lumbering Axel. She also has a guitar on her back and one of her specials is using it like Pete Townshend on an unsuspecting enemy. I'm already a fan.

Ironically, the one thing I expected to love about Streets of Rage 4 wasn't there. I could barely make out the music because publisher Dotemu's booth at Gamescom was far louder than the tiny speakers connected to the TV. Thankfully IGN has uploaded some gameplay from the level I played, and while there's still some work to be done with character voices and foley, I like where it's going. There's also a new Motohiro Kawashima track on Dotemu's Bandcamp that sounds as wild as anything he created for the old games:

So, yeah, against all odds, Streets of Rage 4 has won me over in record time. While the developers haven't announced when the game will arrive, we do know that it'll be available on all the expected platforms: PlayStation, Xbox, Switch and PC. I imagine Dotemu will continue to trickle out information on characters, enemies, music and the like over the coming weeks and months before announcing the release date and pricing.

In this article: art, av, design, dotemu, gamescom, gamescom2019, gaming, genesis, guard crush games, lizardcube, sega, streets of fury, streets of rage, streets of rage 4
All products recommended by Engadget are selected by our editorial team, independent of our parent company. Some of our stories include affiliate links. If you buy something through one of these links, we may earn an affiliate commission.