The first flagship phones of the year are here. In fact, depending on how you math, the first flagship phones of the decade are here, and Samsung is ready to set the stage. Over the past two or three years, camera notches got smaller, fingerprint sensors disappeared under screens and display aspect ratios got taller. There's not a lot that smartphones can do to surprise us anymore. This year, the most unexpected thing about the new Galaxy flagships is their names -- the S20, S20+ and S20 Ultra. Samsung left 11-19 in the last decade, and even that was already exposed (no thanks also to the abundance of leaks).

Still, it's nice to get the official specs for the new handsets, if only so we could finally make the appropriate comparisons to decide whether to upgrade. This year's flagships come in three sizes -- the 6.2-inch S20, 6.7-inch S20+ and the 6.9-inch S20 Ultra. That last one is a souped up model for those who want extremely high-resolution selfie cameras and a lot of zoom. For those looking for something a little less advanced, the S20 and S20+ are probably the more suitable options.

All three models feature panels that run at 120hz, though only at 1080p. At their native resolution of Quad HD+, the screens run at 60hz. You can tweak the refresh rate setting so you can decide whether to have a faster display or a sharper one. 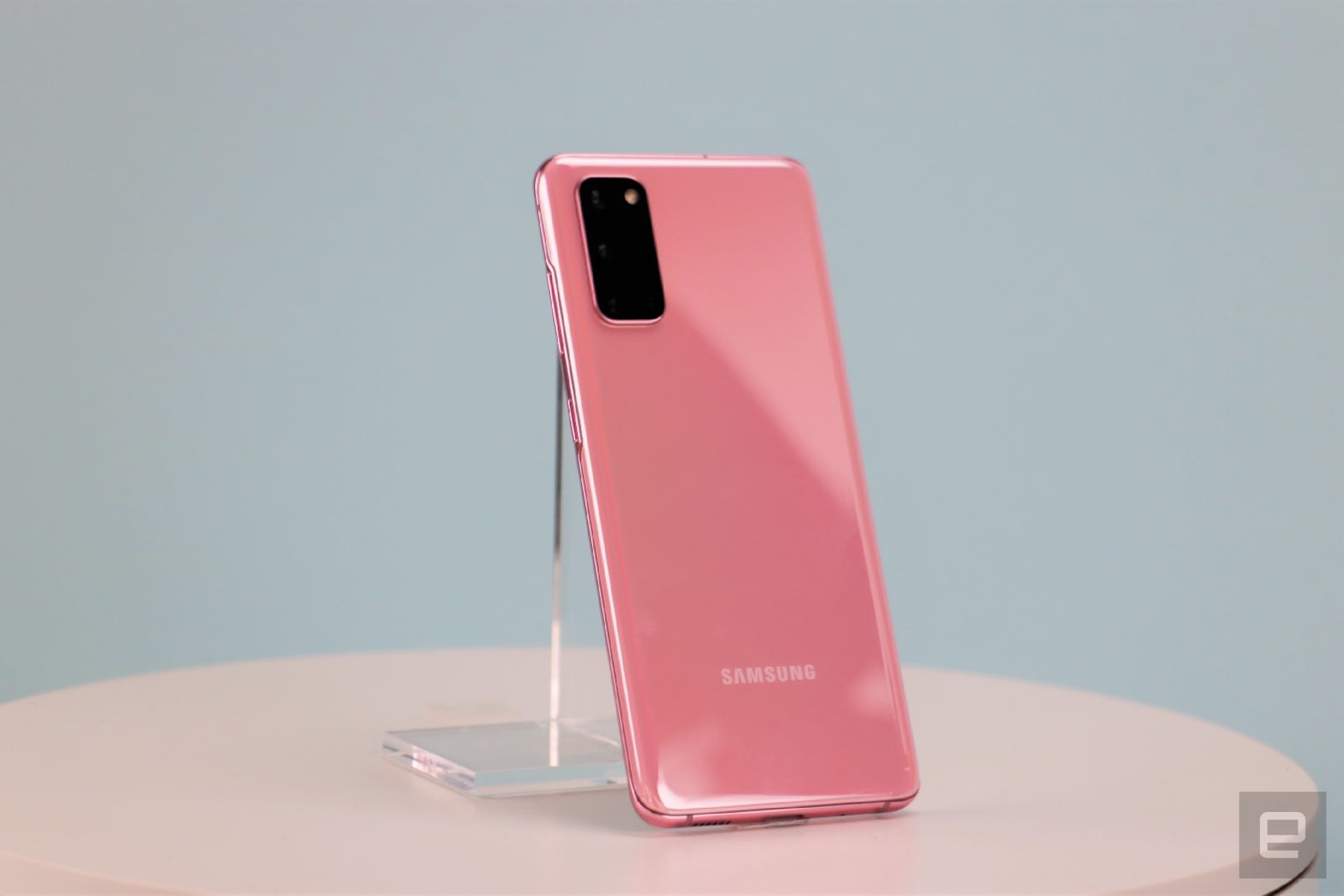 The most interesting highlight for the S20 series is in photography. Samsung said the new flagships use "our biggest image sensor yet," which enables sharper photos as well as better low light performance.

Because it's the smallest, the S20 only has a triple camera setup on its rear, while the S20+ (and the Ultra) has an additional depth sensor. The setup comprises a 12-megapixel "Ultra Wide" option with a 120-degree field of view, a primary 12MP sensor with a 79-degree field of view and f/1.8 aperture, as well as a 64MP telephoto with an aperture of f/2.0. All three phones pack a new feature called "Space Zoom" that offers up to 30x zoom on the S20 and S20+ (up to 100x on the Ultra), using a combination of a 3x hybrid optic zoom and software.

You can also capture super high-res video on the S20s -- they support up to 8K footage that you can record and use a tap to share feature to stream to one of Samsung's 8K QLED TVs. The phones also offer updated Super Steady stabilization to make your clips look smoother, as well as a built-in video editor so you can trim your media without needing to first install more software.

There's also a new feature called Single Take that snaps a variety of formats when capturing a shot. When you use Single Take mode on your laughing baby, for example, the S20 will save a brief video loop, an ultra-wide shot, a version with a filter applied by AI and a cropped option. 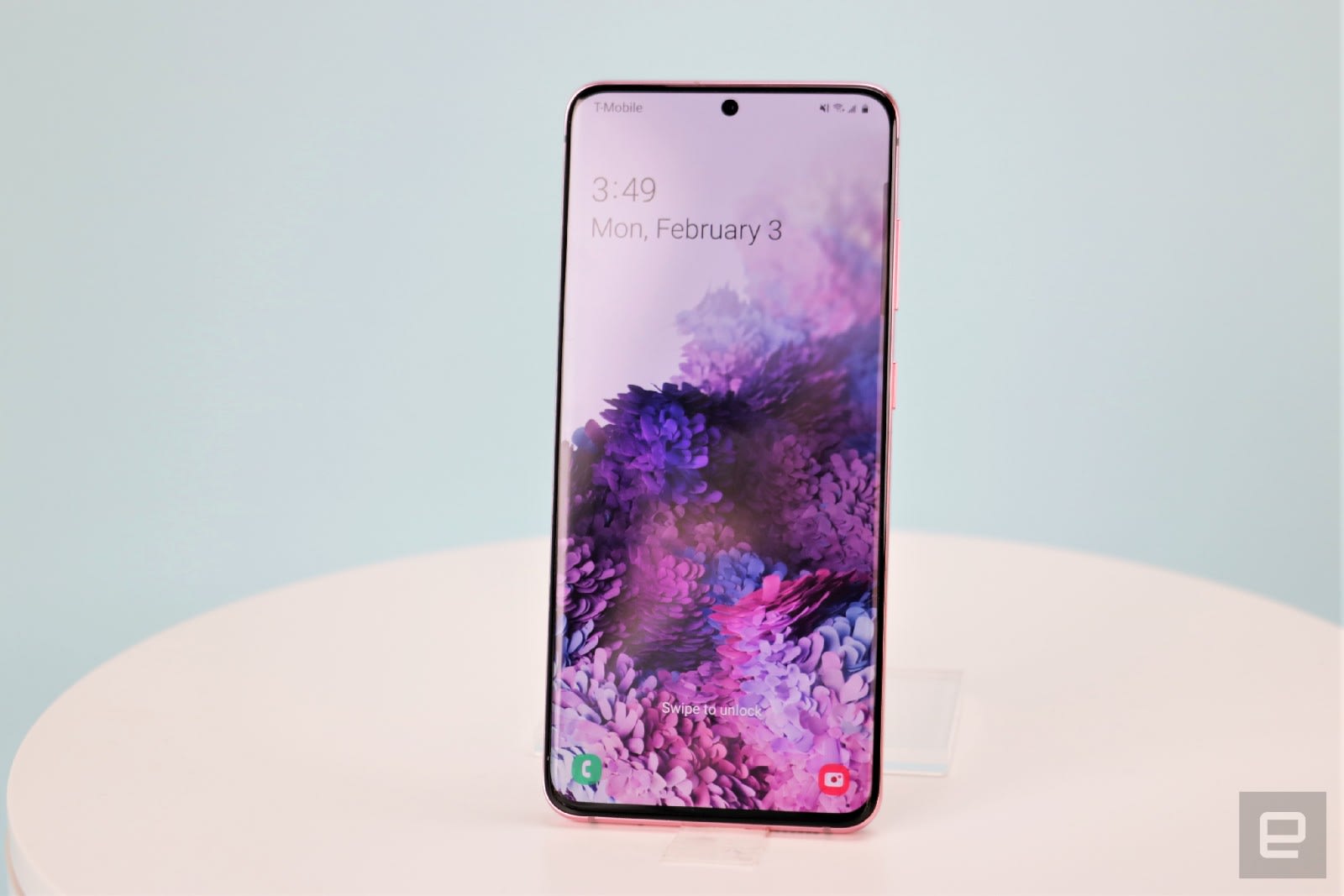 Aside from the cameras and displays, the other highlight of the new S20s is... 5G. This year, the networking capability isn't a bonus reserved for the highest end variant like before. All three S20s will support 5G, although only the S20+ and Ultra are compatible with millimeter wave technology.

You'll also find Google's Duo video-calling service better integrated within Samsung's dialer and contacts apps, so you can more easily call your friends. There's also a new Music Share tool that lets you and your friends stream music to the same Bluetooth speaker, while a new Spotify-centric Bixby Routine creates personalized soundtracks based on your activity. Those who love playing Fortnite on their phones will also appreciate the new 240hz touch response time in tandem with the 120hz screens for more responsive gameplay.

Providing all the power for that is the Snapdragon 865 or Samsung's own Exynos, depending on the region, and all models come with at least 12GB of RAM. The S20 and S20+ come with a 4,000mAh and 4,500mAh battery respectively, and Samsung hasn't provided battery life estimates yet. Given the faster screens and 5G support though, runtime might take a hit -- but we'll have to test the phones out to know for sure. The S20 starts at $999.99 while the S20+ comes in at $1,199.99, and both models will be available in gray, blue and pink. Pre-orders begin February 21, with the phones arriving in stores on March 6th.