It seems to draw some inspiration from Porsche's iconic 911 Turbo.

Hyundai has unveiled a new concept EV called the Prophecy with an ultra-aerodynamic profile and joysticks instead of a steering wheel. Meant to be on display at the cancelled Geneva Motor Show, the electric car aims to convey Hyundai's current design style called "Sensuous Sportiness." It's fair to say they succeeded, as it looks like a Porsche 911 Turbo from the rear and front while the side profile is lifted straight from a wind tunnel test.

The wheels are pushed well to the corners to maximize space in the interior, which has plenty of the tech you'd expect in a concept EV. Joysticks are used to control it in place of a steering wheel and have buttons that let the driver access various functions. It's also got a pillar-to-pillar display in the dashboard, which swivels "allowing for a spacious interior and seat position," Hyundai wrote in a press release.

It features eco-friendly materials, with colors, textures and ambient lighting all designed to help passengers decompress. Meanwhile, the "Clean Air Technology" distributes purified air inside the vehicle. "In addition, the treated air is circulated back out in the atmosphere as clean air," Hyundai said, though don't count on fixing global warming with that feature. 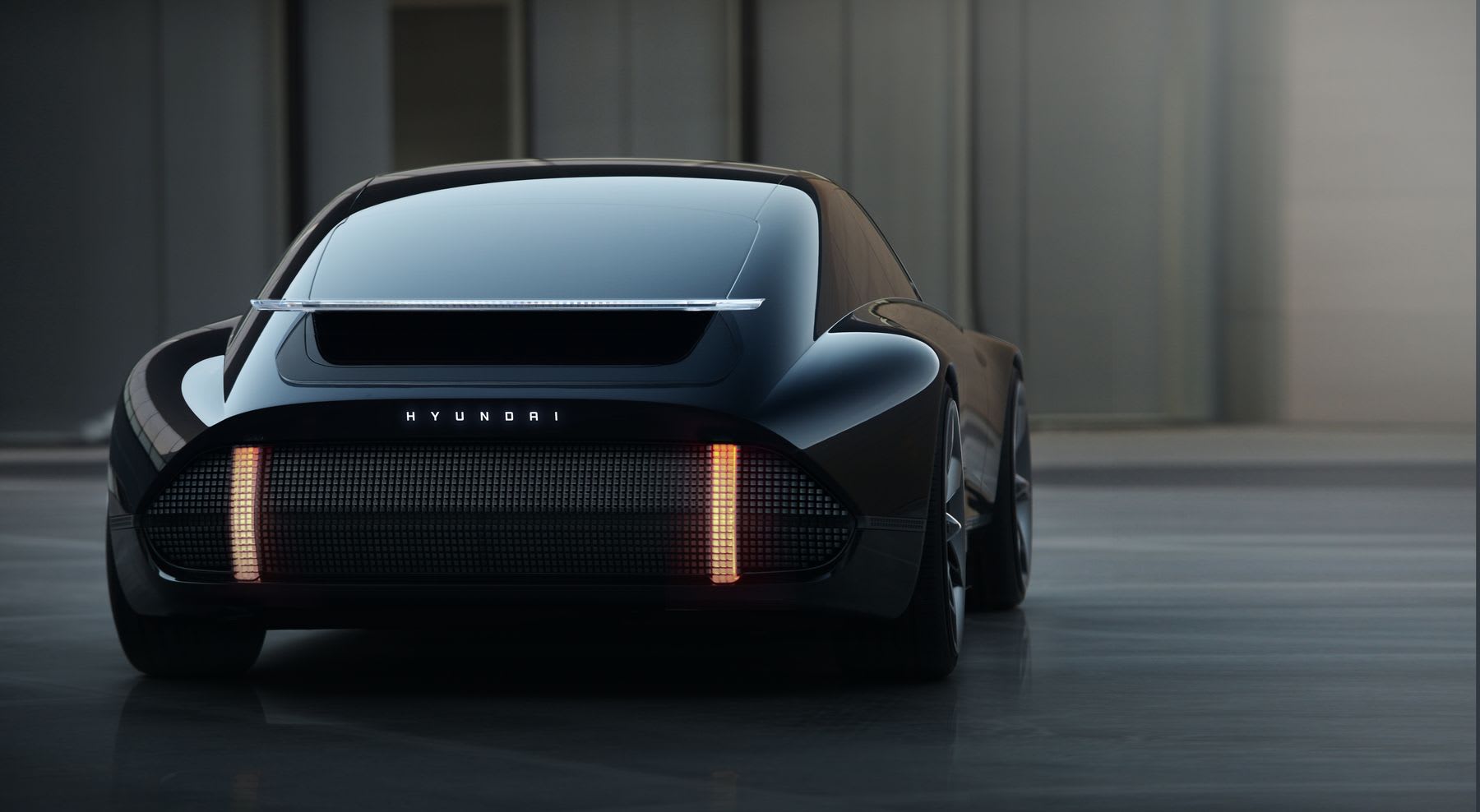 The main attraction is the aerodynamic exterior of the vehicle (especially considering that Hyundai didn't release any images of the interior). Hyundai compares the profile to a "weathered stone" and it certainly looks like it would slip through the air without much resistance.

From the rear it strongly resembles a Porsche 911 Turbo, as mentioned, especially the bulging rear renders and rear spoiler. That spoiler is actually made of a clear acrylic material to "call attention to the functional beauty of the components" inside, like the lighting and camera monitoring system, Hyundai said.

The front also looks Porsche-like, down to the covered headlamps. Those, along with the lights on the tail lamp and spoiler, use Hyundai's pixel lamp technology first seen on last year's 45 concept. That tech is designed to scream "electric car" to onlookers, and will be used in the future as "a signature design element in future Hyundai models," the automaker said.

It's too bad that we won't be able to see this concept in person, because I suspect that it would look even more dramatic than the pictures suggest. Hyundai said the Prophecy name is meant to foreshadow future Hyundai production vehicle technology, however, so we'll no doubt see it at another auto show once the coronavirus risk has passed. 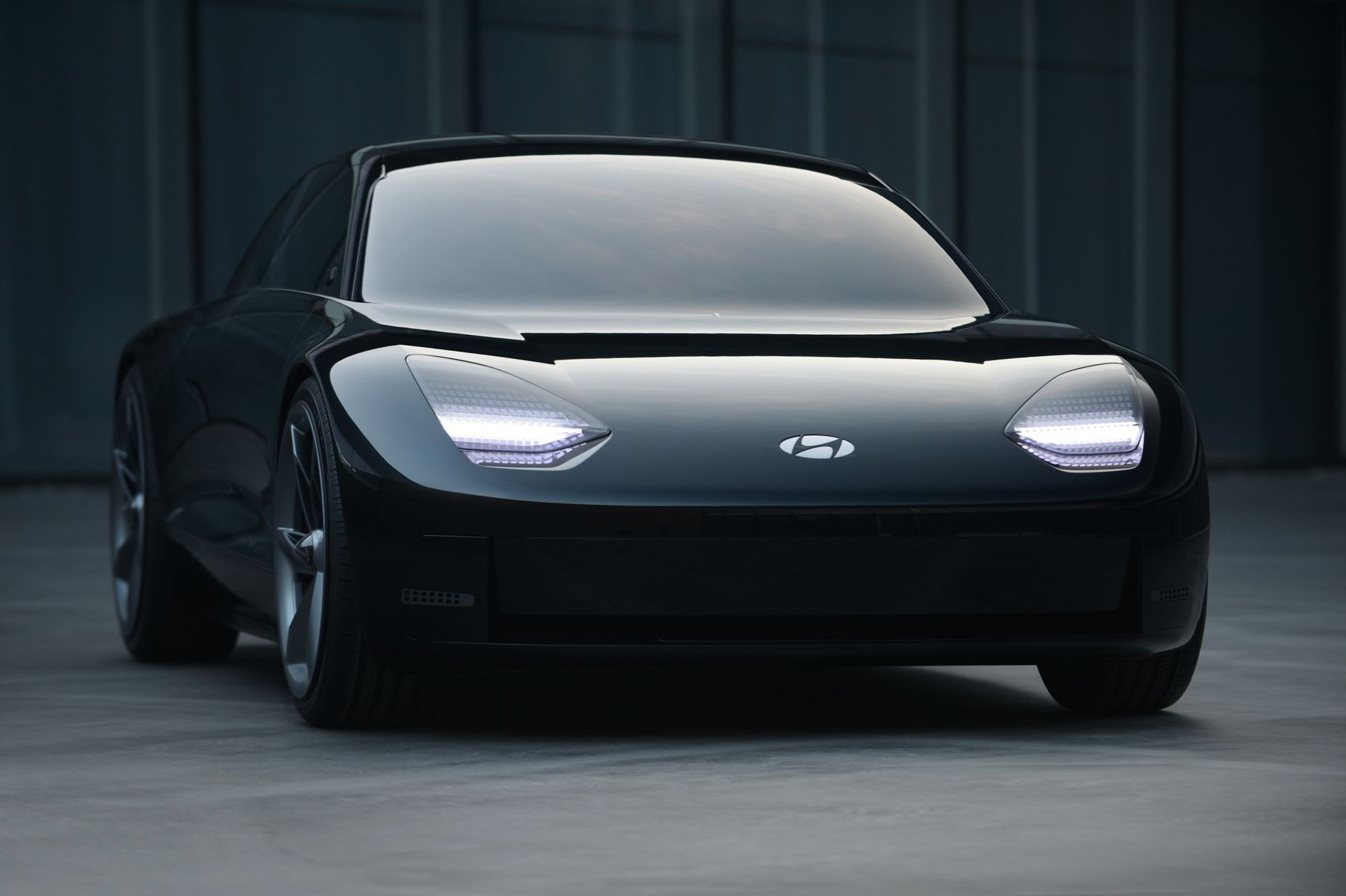 All products recommended by Engadget are selected by our editorial team, independent of our parent company. Some of our stories include affiliate links. If you buy something through one of these links, we may earn an affiliate commission. All prices are correct at the time of publishing.
Hyundai's slippery Prophecy concept EV is controlled by joysticks
concept
EV
gear
Geneva Motor Show 2020
Hyundai
Prophecy
tomorrow
transportation