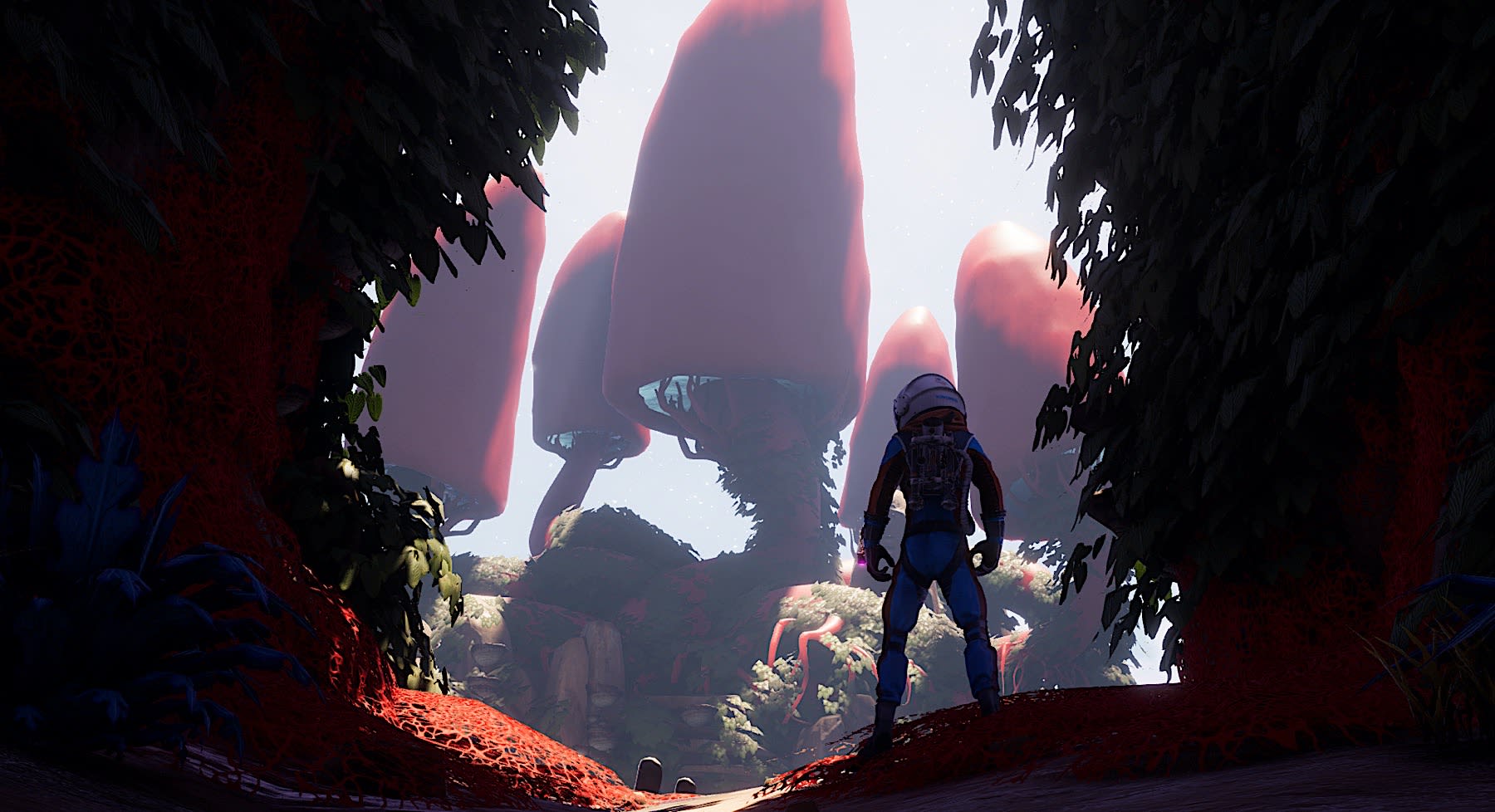 I step on to the glimmering blue teleporter and beam aboard my Javelin spaceship, a slew of aluminum, carbon and silicon particles in hand. Immediately, some screens on the upper deck start playing an advert for something called Mini-Mall Monkeys. I scramble up the stairs and stare dumbfounded as the booming voiceover explains how anyone can make tiny humans by "adding sub-zero radioactive water to a microlife power packet mix." The clip, performed by real actors in brightly colored outfits, is shot like a toy commercial from the 1990s.

"Watch them stroll, shop and live as they autonomously move throughout their very own shopping complex, completely unaware of your presence," the voiceover exclaims. "Engage in a fascinating examination of standard Earth activity, or declare a Black Friday and send your shoppers into violent bargain-hunting frenzy where only the strong survive!"

All of Journey to the Savage Planet is like this. The space exploration game you can play solo or with a friend online is simultaneously relaxing and silly. Alex Hutchinson, the co-founder of developer Typhoon Studios, calls the adventure a satire. "But it's an earnest satire," he stressed.

One of the adverts shown on the ship.

The humor permeates the entire experience. Take the opening five minutes, which includes a training video by "the fourth-best interstellar exploration company," Kindred Aerospace. Martin Tweed, the firm's eccentric CEO, explains that your mission is to explore planet AR-Y 26, document its flora and fauna and decide if it's suitable for human habitation. The production values are laughably bad -- the font choices are outdated, the visual effects are awful and every scene is clearly shot in front of a green screen -- to highlight the firm's general incompetence.

"I should also mention that while every effort has been made to ensure a comfortable and safe journey, recent budget challenges, plus the unknown nature of the obstacles you'll be facing, mean that we were unable to send you anything in the way of equipment," Tweed explains jubilantly. Luckily, there's a 3D printer on the Javelin that can turn space junk into useful gear.

You can head back out and retrieve your loot, which sometimes includes the option to "shamefully" bury your mangled corpse.

Once you've watched this opening skit, you're free to step outside and start exploring. The first cave has some spherical Pufferbirds that you can slap or kick like an NFL player trying to score a field goal. Hit the feathered creatures with enough force and they'll explode into a pile of green goop that resembles the slime (in the UK, we called this "gunge") used on countless Nickelodeon shows in the late 1980s and early '90s.

Keep roaming and something will inevitably kill you -- a mistimed jump into a chasm, perhaps, or a tangle with a nasty Pikemander -- and you'll be 'reprinted' back on the Javelin. Your bodiless companion, a smarty-pants AI called E.K.O, will then crack a joke like: "Just remember that you did your best. It wasn't very good, but you did your best."

The planet is crawling with carefree Pufferbirds.

You can head back out and retrieve your loot, which sometimes includes the option to "shamefully" bury your mangled corpse. Alternatively, you can boot up the Javelin's computer -- which has a primitive desktop interface, frequent screen flicker and a loading bar that glitches backward before moving forward again -- to read some emails before tackling another mission. These include a note from the Monocorp First Galactic Bank of Commerce, which is somehow "delighted" to share that your balance is now -$492,237.

"While this level of debt may seem substantial, with your recent promotion to Intergalactic Explorer -- combined with its accompanying two-percent bump in annual salary -- we can now project that you will likely be free and clear of debt in as little as 47 years," the message reads. "This projection represents a significant step down from your previous projection of 51 years and puts you well above average in terms of debt elimination among the general population."

Thankfully, the game offers more than comedic charm. The planet is split into beautiful biomes that surround a mysterious tower at different elevations. To satisfy your employer, you need to explore each region and find the teleportation hubs that connect to the Javelin and, eventually, higher and more dangerous biomes. A simple compass at the top of the screen indicates the direction and distance to your current objective. While that's invaluable, it's on you to chart a path through the planet and figure out the exact destination.

The correct route often requires a surprising amount of platforming. As the game progresses, you'll slowly unlock gear that lets you double jump, grapple and grind around the environment. You'll also discover a shuriken-shaped seed that you can throw on select plants to create a custom grapple point. The highest biomes require a delicate ballet of jumps and grapples -- both with predefined grapple points and those created with seeds -- to traverse. While it never reaches Mirror's Edge or Dying Light-levels of parkour complexity, it's fun and immensely satisfying to move around without touching the ground.

You have a mission -- to explore the planet and investigate its seemingly manmade tower -- but there's no ticking time bomb or save-the-world apocalypse to deal with. That means you can ignore the main quest line at any time and poke around the world without E.K.O or anyone else questioning your actions and telling you to hurry up. It's a similar vibe to No Man's Sky and other space exploration games that prioritize puttering about over Halo-style action.

Relaxing detours are not only encouraged but required if you want to complete the game's numerous side quests, which include finding rare alien alloys, fuel sources for your ship and edible orange goos that raise your maximum HP. They're also necessary if you want to complete your role as a cartographer. Pressing up on the D-pad (or tab, if you're playing with a mouse and keyboard) will bring up an X-ray-style overlay that highlights missing items in your encyclopedic Kindex. You can fill in the blanks by moving your on-screen reticule, holding down R1 (or the Z key, if you're on PC) and waiting for a small meter to fill.

Relaxing detours are not only encouraged but required if you want to complete the game's numerous side quests.

Completing this task will often reveal humorous descriptions about the planet. The section on the health-restoring vitality plant, for instance, reads: "They're drugs. What, you thought eating a big orange berry is gonna cure your gout? They're not miracle fruits, they're hallucinogens." The cartography process sounds simple, but some creatures will run away, teleport or burrow underground like a mole. Locking on for long enough can be tricky, especially if your target has decided that your flesh and bones would make a tasty meal.

If you want to stay alive, you'll occasionally need to fight back. Slaps and kicks aside, your main weapon is a plasma pistol with unlimited ammunition. You can craft various upgrades, including a faster reload and supercharged shot, but you won't find a shotgun or any other firearm on the planet. Instead, you'll have to rely on exotic fruit -- bombegranates, blight bombs and shock fruits -- to increase your combat options. At first, these items will defuse as soon as you pick them up. With the right space suit upgrades, however, you can stow a handful of each fruit and throw them whenever you like.

Some creatures require quick movement and precise shooting to defeat.

Most of AR-Y 26 is filled with docile prey that you can ignore or brush aside with a quick backhander. Every so often, you'll encounter a pesky predator, though, that requires some nimble dodges and precise shots to dispatch. The frog-like slamphibian, for instance, can create a bunch of miniature typhoons that are difficult to avoid. The reptilian pikemander, meanwhile, will curl up into a ball and charge at you with devastating force.

Journey to the Savage Planet has a few boss battles, too, which force you to constantly switch platforms, dodge attacks and identify moments of vulnerability. The encounters aren't particularly original -- if you've played a game in The Legend of Zelda franchise before, you know what to expect -- but they're a welcome break from the game's otherwise relaxing pace.

At $29.99, Typhoon's first game is an easy recommendation for PlayStation 4, Xbox One and PC players. It's clearly meant for people who don't have the time or patience to explore an entire galaxy (hello, No Man's Sky and Elite Dangerous) or even a small colony like the one presented in The Outer Worlds. You can complete the main quest line in 10 hours, which is perfect for a weekend binge or playing over a few consecutive nights. And, if you're smitten by the game's colorful world, there are plenty of collectibles and space suit upgrades to hunt down once the credits have rolled.

One of the game's Zelda-inspired bosses.

Journey to the Savage Planet is a tad bittersweet, though, because it's the first and only game that Typhoon will make as an indie developer. Google acquired the team last month to bolster its Stadia studio in Montreal, led by former Assassin's Creed producer Sébastien Puel. For now, it's unclear if the roughly 30-person group will be working autonomously or as part of a larger group. If it's the latter, we may never see the Typhoon logo again.

Regardless, Journey to the Savage Planet should be remembered and commended for its comedy. Many blockbuster video games, including the popular Borderlands franchise, have tried to combine humor and space adventure. Few deliver a procession of jokes, though, that don't feel repetitive or embarrassingly crude after the first five hours. Somehow, Typhoon's brand of "endearing satire" doesn't fall into this trap. The writing isn't clever or particularly ambitious, but the farts and goo retain their childlike charm throughout. For such a small team, it's a minor triumph and proof you don't need the largest budget or world to succeed.

Source: Journey to the Savage Planet
In this article: art, gaming, Journey to the Savage Planet, sci-fi, science fiction, Space, Space Exploraton, Typhoon Studios
All products recommended by Engadget are selected by our editorial team, independent of our parent company. Some of our stories include affiliate links. If you buy something through one of these links, we may earn an affiliate commission.