'Journey to the Savage Planet' is surprisingly relaxing

When I first heard the name 'Journey to the Savage Planet,' I tensed up. I've played tons of space exploration games that put a heavy emphasis on survival. They're brilliantly tense affairs, but I wasn't sure that my sleep-deprived body and mind were ready for that kind of onslaught at E3.

Thankfully, the first title by Typhoon Studios is nothing of the sort. In fact, it's the complete opposite -- a relaxing and consistently funny adventure that's perfect for people who don't want to feel stressed out.

The first-person title takes place on a vibrant world called AR-Y 26. You play as a galaxy-trotting explorer for Kindred Aerospace, a company that is, well, probably not the best employer. "For the eighth year running, Kindred has been voted the fourth best interstellar exploration company by our peers," Martin Tweed, the firm's chief executive proudly explains in a promotional video. You then step out of your spaceship and do, well, whatever you like. The game sets a couple of tasks -- scan the planet to determine if it's fit for human habitation, and investigate a strange, tower-like structure -- but you're free to wander and mess around instead.

And oh boy, can you mess around. With an Xbox One controller, for instance, I discovered that you can slap and 'power slap' aliens by tapping and long-pressing the X button respectively. I must have spent five or 10 minutes sprinting through the undergrowth, looking for unsuspecting aliens that I could smack with seemingly superhuman strength. 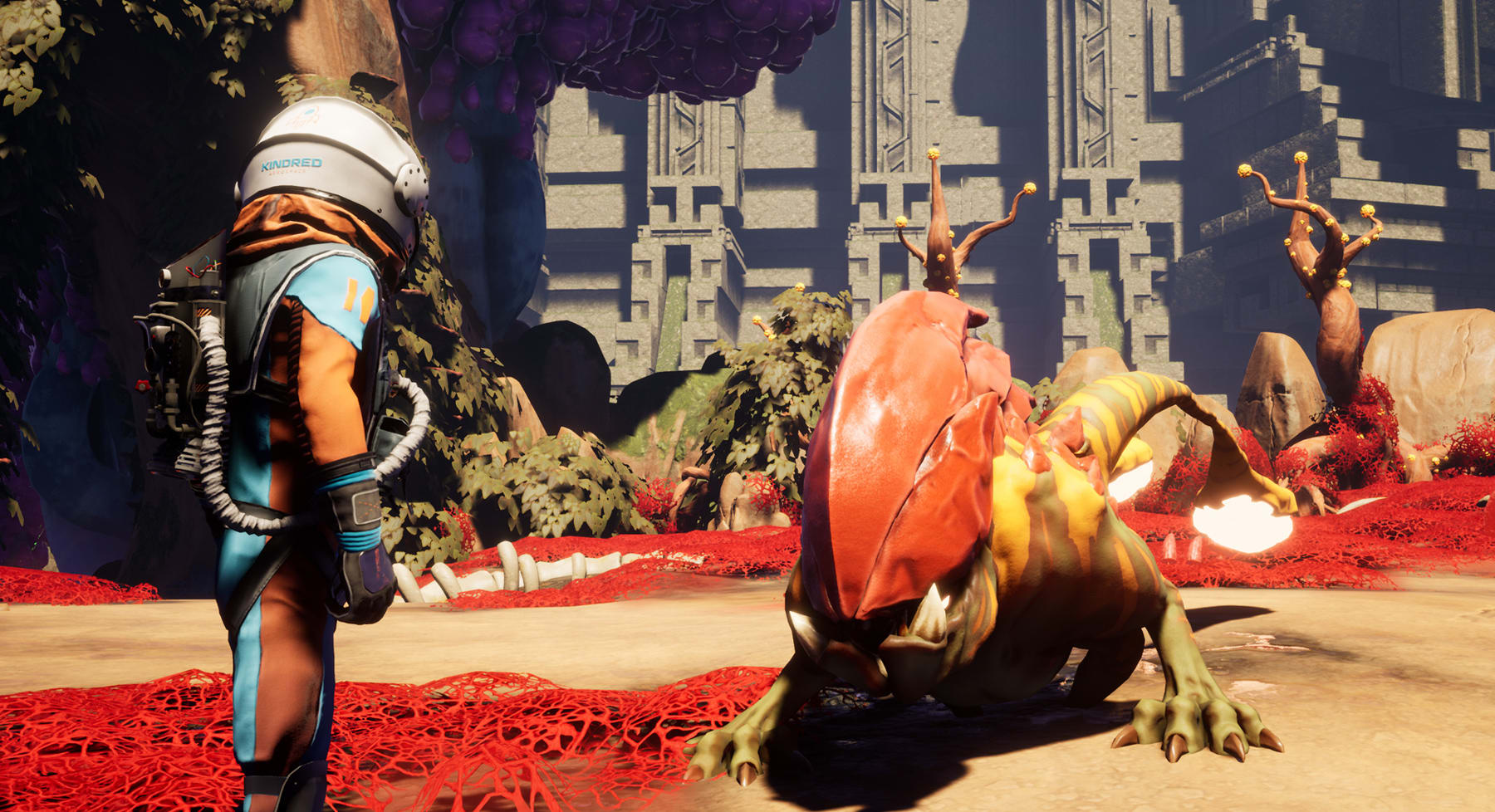 The game does have some dangerous creatures, though. Early in my gameplay demo, I found a lizard-like creature that could curl up into a ball and charge at ferocious speed. If I dodged correctly, the alien would reveal its weak point for a few seconds -- a long tail with glowing orbs -- that could be exploited with my futuristic blaster. Later, I had to tackle two of these monsters simultaneously, which required some precision double-jumps and evasive strafing. Unsurprisingly, it took a few tries before I could vanquish them both and retrieve the special resource they were guarding.

All the while, the game delivers some surprisingly hysterical dialogue. The first time I ate some orange flora -- a collectible that boosts your character's maximum health, among other stats -- a virtual assistant questioned my sanity and why I would consume something I knew literally nothing about. I couldn't but help laugh. "Yeah, that was a stupid thing to do," I told myself. "But I do it all the time in video games!" Later, when I died and respawned in my spaceship, the robotic voice came up with a poem about my short-lived expedition. I can't remember the exact words, but it made me grin and shake my head in a 'I can't believe they wrote that' way. 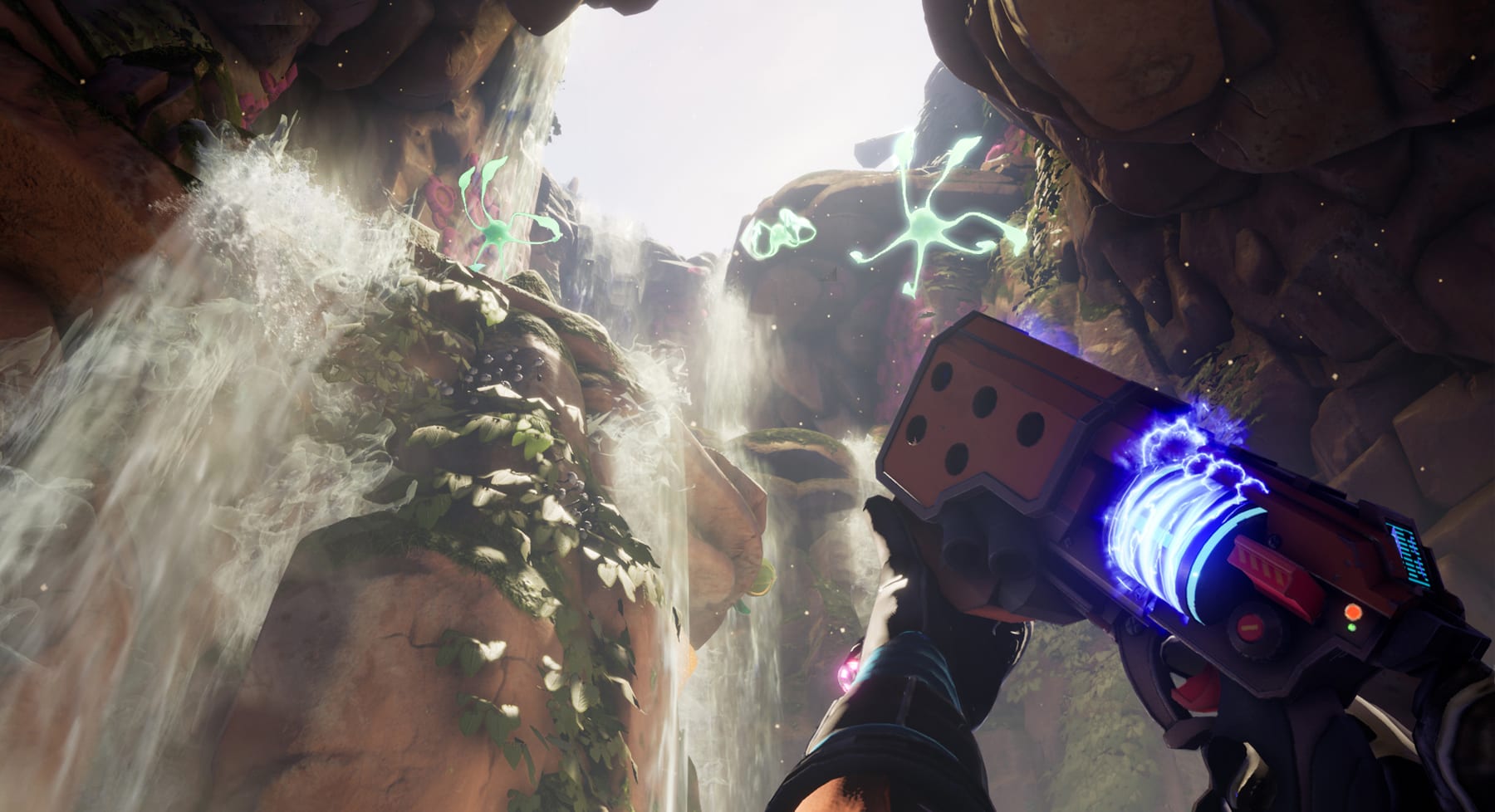 Typhoon Studios, a Canadian developer comprised of former Ubisoft and Electronic Arts employees, calls it an "earnest comedy." The team wanted to build a smaller and more light-hearted title that didn't require hundreds of hours to complete. You might play the game for a couple of hours after work, or breeze through most of the quests over a weekend. With that in mind, Journey to the Savage Planet won't be a $60 game. The exact price is still a mystery, but the company hinted that it'll be a budget title for PlayStation 4, Xbox One and, via the Epic Games Store, PC players.

Plenty of games let you explore an alien world. Few have the same charm and distinctive personality as Journey to the Savage Planet, though. There's a chance, of course, that the humor will wear thin after a few hours and expose a somewhat by-the-numbers shooter underneath. What I saw, though, didn't leave me worried or concerned. Typhoon Studios has found its voice and I'm excited to see how the game turns out next year.