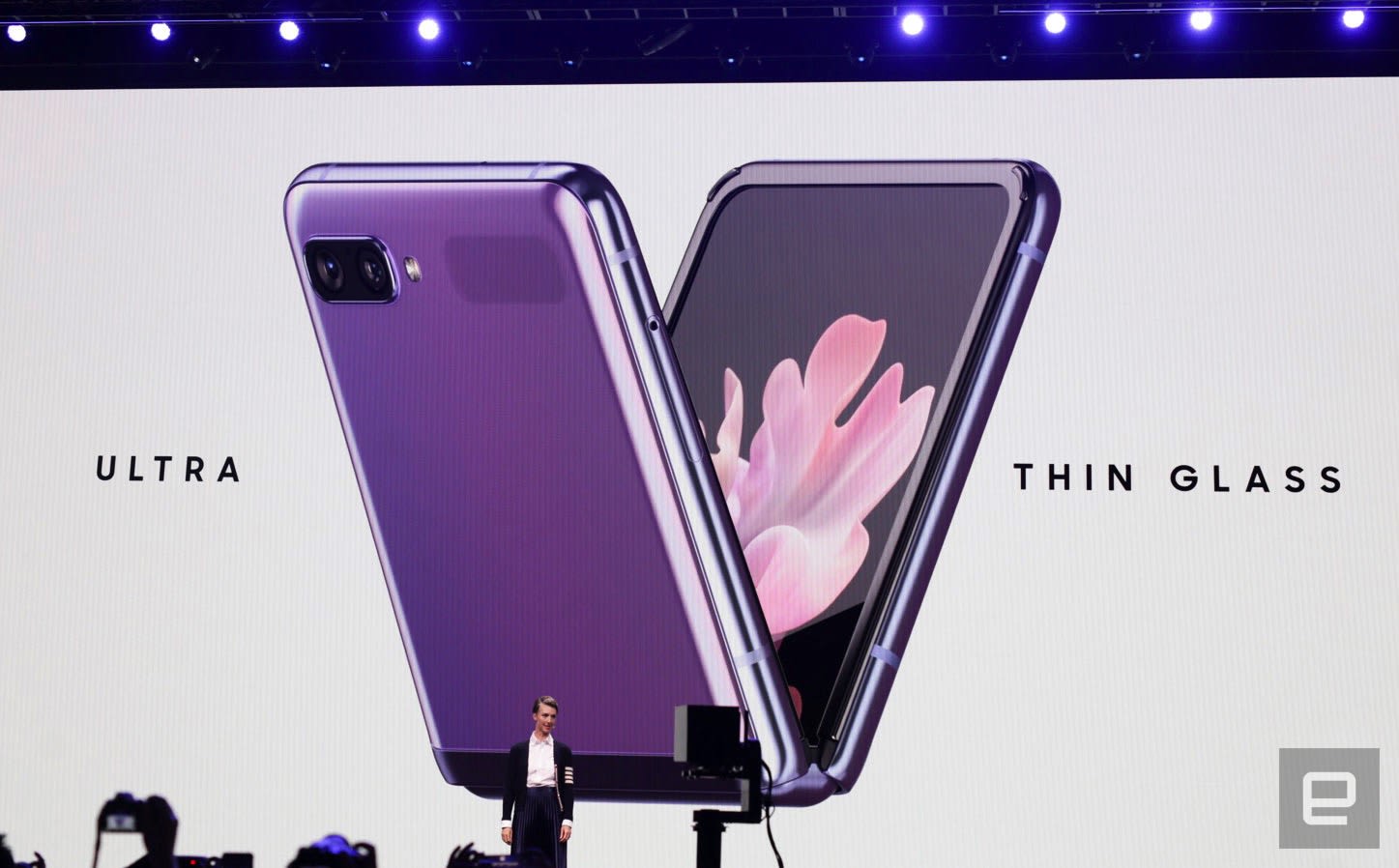 Samsung announced its first folding phone one year ago -- and what followed was tumultuous, to say the least. The Galaxy Fold's fragile design caused major delays, and its high price made many question exactly who this phone was for. The troubles haven't stopped Samsung from trying again, though: the company just announced the Galaxy Z Flip, its latest folding phone that has a design that's extremely similar to Motorola's recently-revived Razr.

Numerous leaks had already given us a good idea of the Galaxy Z Flip's design, which features a giant 6.7-inch screen when it's open. It's nearly square when closed, and there's a tiny screen on the back for notifications. It also lets you take a selfie when the phone is closed. The main display goes nearly edge-to-edge, without the big "chin" you'll find on the Razr. When it's open, you can see the same sort of hinge crease that was found on the Galaxy Fold, but this time out Samsung is using very thin glass rather than the plastic covering found on the Fold. The screen's full resolution when open is 2,636 x 1,080.

The phone features a three-stop hinge, so you can hold it open at three different angles -- not just open and closed. There's also a a "flex" mode that lets you have different parts of an app running on two halves of the display. One example Samsung gave was watching a YouTube video on the top half and leaving comments on the bottom half. (Speaking of YouTube, Samsung is including a free subscription to YouTube Premium.)

The front-facing camera comes in at 10 megapixels with an F/2.4 aperture, while there are two cameras around the back. The main wide-angle camera has a 12-megapixel sensor with an F/1.8 aperture, optical image stabilization, and up to 8X digital zoom. The second camera is a ultra wide angle shooter, also with a 12-megapixel sensor. It has an F/2.2 aperture and a 123-degree field of view.

Samsung says it has a 7nm, 64-bit octa-core processor but didn't say specifically what processor it is -- rumors pegged it as the Snapdragon 855 Plus, but we haven't confirmed that yet. It also has 8GB of RAM and 256GB of storage, and the battery is rated at 3,300 mAh. Naturally, wireless charging and fast charging are on board, as well.

As rumored, the Galaxy Z Flip will be available in just a few days on February 14th, and it'll start at $1,380.

Source: Samsung
In this article: foldable, galaxy z flip, gear, mobile, s20event, samsung, smartphones
All products recommended by Engadget are selected by our editorial team, independent of our parent company. Some of our stories include affiliate links. If you buy something through one of these links, we may earn an affiliate commission.