To the surprise of absolutely no one who paid attention to Samsung's hype-building for Unpacked, it had more to reveal about its foldable phone. The device is now officially known as the Galaxy Fold, and much like the prototype we saw back in November, we're looking at a 4.6-inch secondary AMOLED display on the outside, followed by a much larger 7.3-inch Infinity Flex AMOLED screen when the device is unfolded.

It has a price and date, too: a whopping $1,980 when it launches on April 26th (May 3rd for Europe), meaning you'll have about two months to gather all that money while choosing between "Cosmo Black," "Space Silver," "Martian Green" and "Astro Blue."

In terms of resolution, the smaller 21:9 screen comes in at 840 x 1,960, and the main foldable screen is 1,536 x 2,152, with both featuring the same 420 dpi density which is quite high for a tablet. Samsung added that the larger polyimide-based display panel has been tested to withstand 200,000 folds, which equates to over five years of usage if you fold it 100 times a day. That's quite a bold claim, but also a reassuring one if true.

There's no specific mention of the Galaxy Fold's processor model except for a "7nm 64-bit octa-core processor," but Samsung did mention its 12GB RAM plus 512GB UFS 3.0 storage space -- the latter apparently reads twice as fast as other smartphones that are mostly using UFS 2.1 chips. There's also a 4,380mAh battery which is cunningly split across both sides for the sake of weight distribution. It's just a question of whether this amount of juice is adequate for handling that larger panel while offering multi-tasking at the same time.

Speaking of battery, much like the S10 and S10+, the Galaxy Fold also does wireless charging as well as Wireless Powershare -- you'll be able to use it to wirelessly charge other devices, including the freshly announced Galaxy Buds.

Compared to the bulky prototype we saw on the dimly-lit stage, the Galaxy Fold is thankfully much slicker. When folded, the device comes in at 17mm thick, but when fully open, that goes down to 6.9mm -- even slimmer than the 7.8mm-thick S10 and S10+ announced today. Interestingly, Royole's FlexPai still manages to beat the Galaxy Fold's folded thickness by 1.8mm; and it's also able to fold down completely flat, unlike the Galaxy Fold due to its hinge. 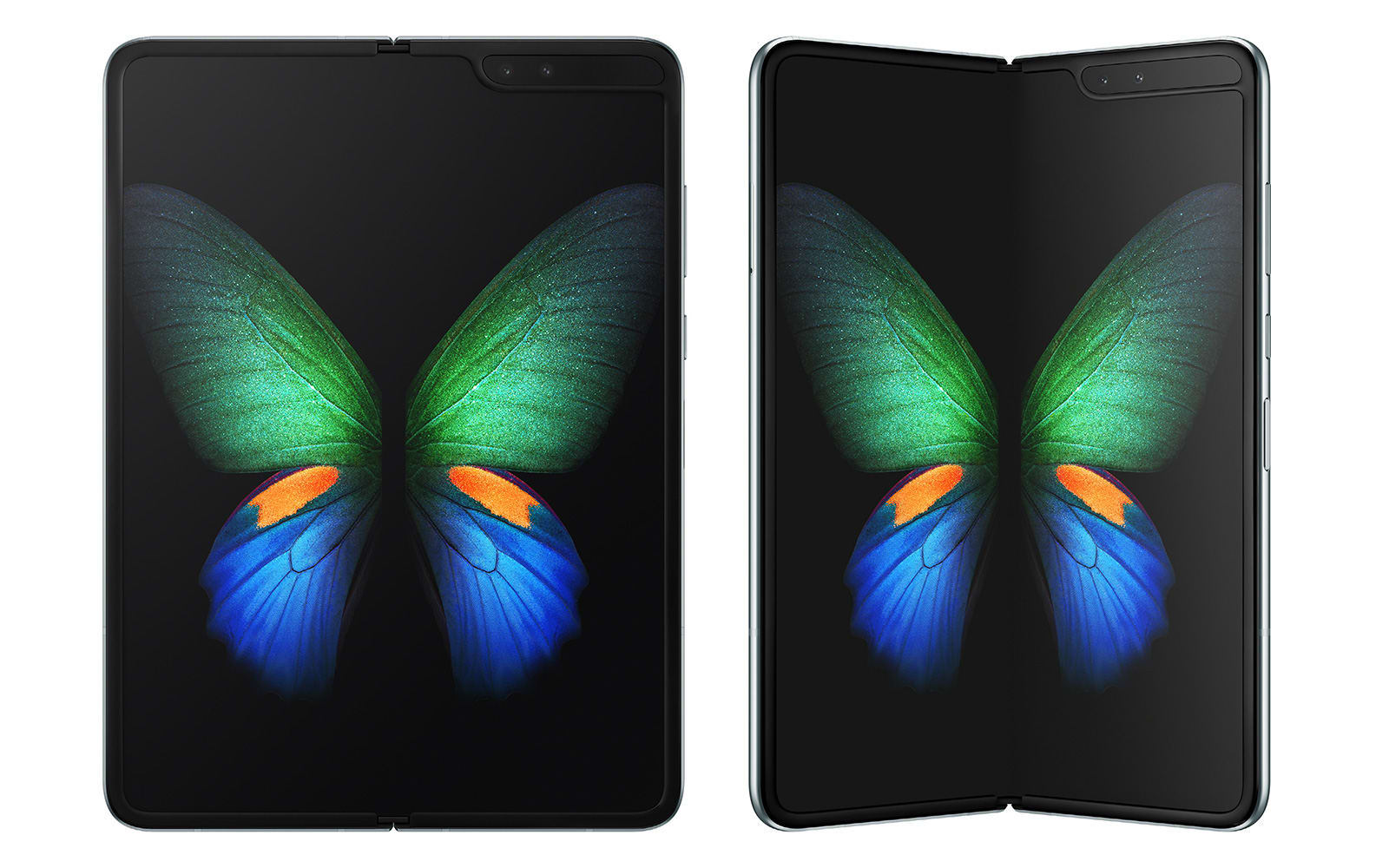 In Samsung's defense, the Galaxy Fold does pack more components. In addition to the extra screen, bigger battery, wireless charging coil and dual AKG speakers, this device also has a total of six cameras to ensure all three sides -- front and back when folded plus the tablet side when opened -- are covered.

You have a main triple set consisting of a 16MP f/2.2 123-degree ultra-wide shooter, a 12MP f/2.4 telephoto camera with optical stabilization, and a 12MP dual-pixel wide camera also with optical stabilization plus variable aperture -- f/1.5 and f/2.4. Then there's a dual selfie camera set on the tablet screen side: you'll be using the 10MP dual-pixel f/2.2 wide camera, which is assisted by an 8MP f/1.9 RGB depth camera. Sadly, this part eats up some of the screen space at the top right corner, but it's otherwise a near-all-screen tablet. Last but not least, when folded, you still have a 10MP dual-pixel f/2.2 front camera. 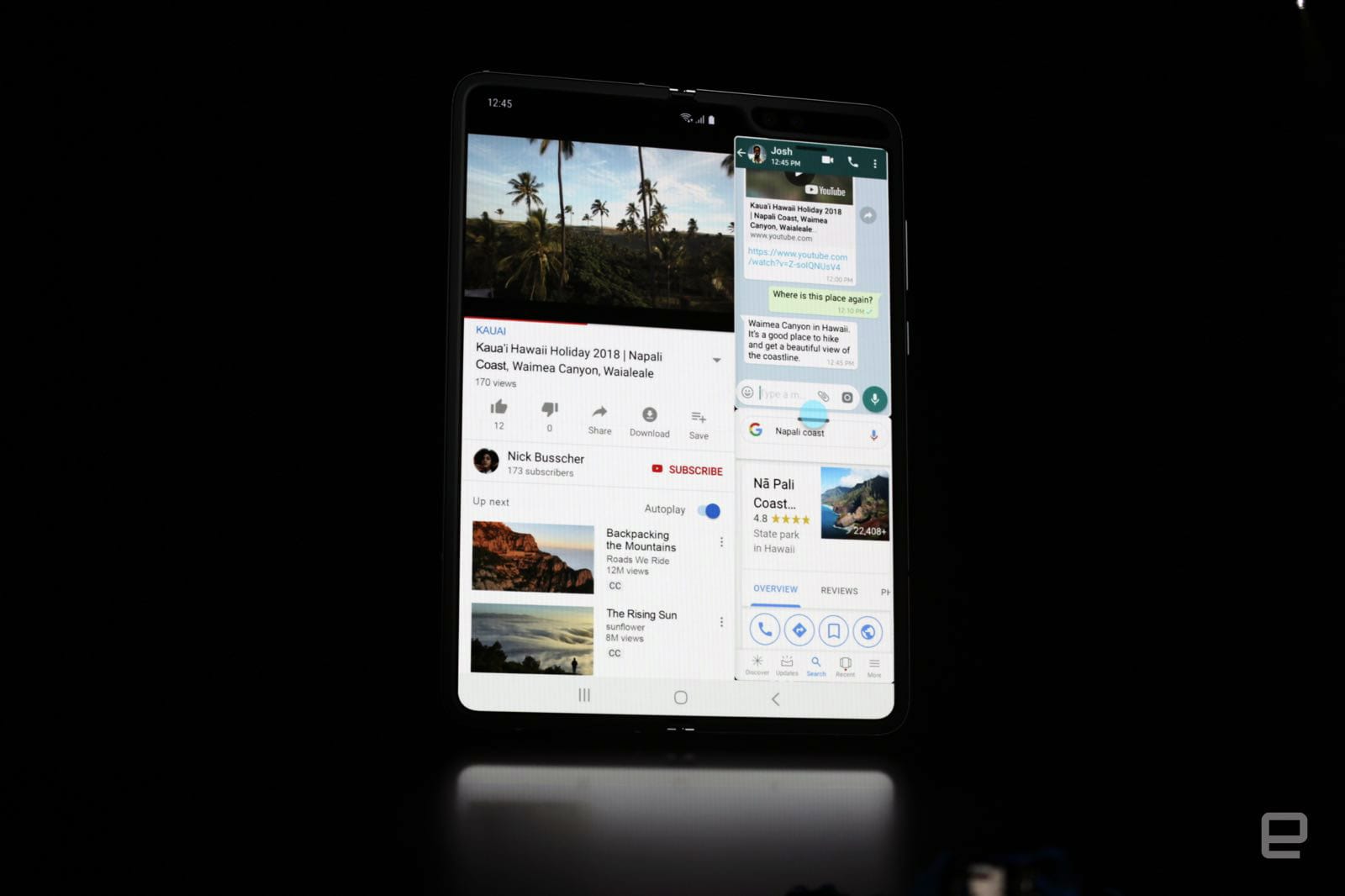 As announced at the earlier developer conference, Samsung has been working closely with Google to make sure users get the most out of this new mobile form factor. With App Continuity, this Android 9 device lets you switch between both screens while staying in the same app, as shown on stage using Google Maps and Netflix. Similarly, when an app notification pops up on the front display, simply unfold to launch the app on the larger screen -- though you may have to unlock the device first using the fingerprint reader on the frame.

We also saw a slick demo of Multi-Active Window. The demonstrator had WhatsApp, Chrome and YouTube running side by side (Galaxy Fold will be shipped with YouTube Premium, by the way), and he was able to enlarge one of those apps by simply dragging it into the larger window. It was indeed a good demo, but as always, we shall see how the device fares in real life -- it's all down to app compatibility at the end of the day. 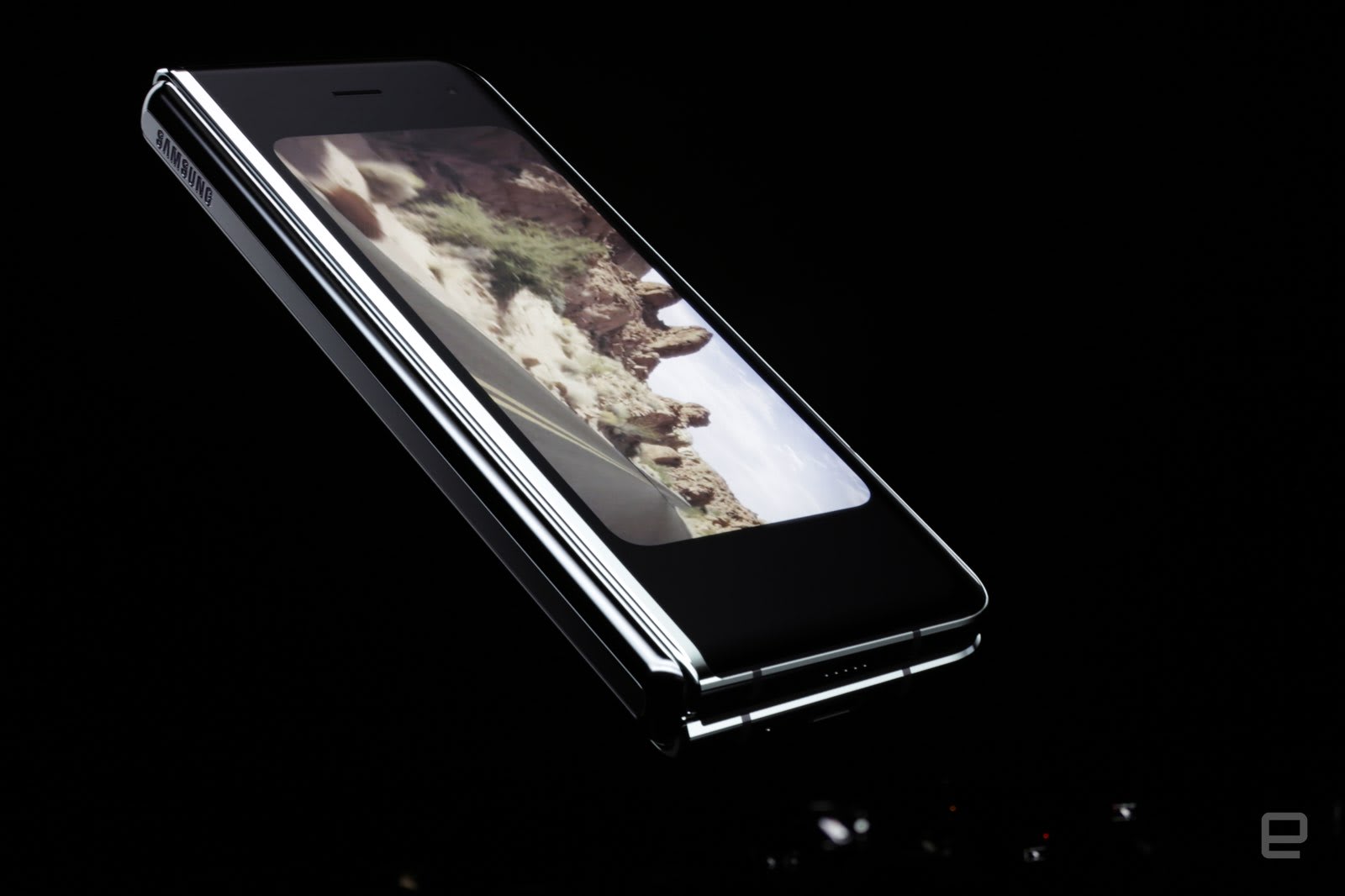 So far, the Galaxy Fold seems to be a well-polished package with good intentions. The specs check out, the screen is apparently durable, the software seems slick, and there's no shortage of cameras no matter which way you hold the device. The only problem here is the price: at almost $2,000, the Galaxy Fold is clearly not for everyone, but you have to give Samsung credit for wholeheartedly pushing the envelope. And of course, the competitors -- which in turn become Samsung Display's potential clients -- are undoubtedly figuring out how to follow suit, which is exactly what this slowing mobile market needs right now.

Kris Holt contributed to this article.