Samsung's true wireless Galaxy Buds are tailor-made for the S10

Like its new phones, Samsung's latest true wireless earbuds weren't exactly a well-kept secret. Heck, they were even tipped in the company's own Galaxy Wearable app. Leaks aside, Samsung officially debuted its new Galaxy Buds today alongside the Galaxy S10 and Galaxy S10+. Thanks to the rumors ahead of time, we already knew they could be charged on the back of the company's new phones via the included case and a feature called PowerShare. And pics of the earbuds from nearly every angle revealed they'd look similar to the IconX that debuted in 2017.

Both of those key features turned out to be true, but there was some info that hadn't made the rounds just yet. Indeed, the Galaxy Buds aren't that much different from the IconX in terms of design, but they are 30 percent smaller and feature a more ergonomic design. Both of those design changes should help them stay in place better during a workout. What's more, AKG audio powers the Galaxy Buds. This isn't too much of a surprise since AKG is a Harman brand, and Samsung bought Harman back in 2016.

Like many wireless headphones these days, the Galaxy Buds have an Ambient Sound mode that will pipe in audio from the world around you. There's even a Quick Ambient Mode that you can activate with a tap -- just long enough to tell your running partner goodbye. Samsung says "adaptive dual microphones" ensure whoever is on the other end of your calls can hear you clearly, even if your in a noisy office or loud coffee shop. This is done with an "inner mic" that picks up your voice internally when you're in a loud spot. The Galaxy Buds sense this automatically and switch from the microphone on the outside to that mic on the inside. The company repeatedly stated these true wireless earbuds aren't just for listening, they're designed for talking too. 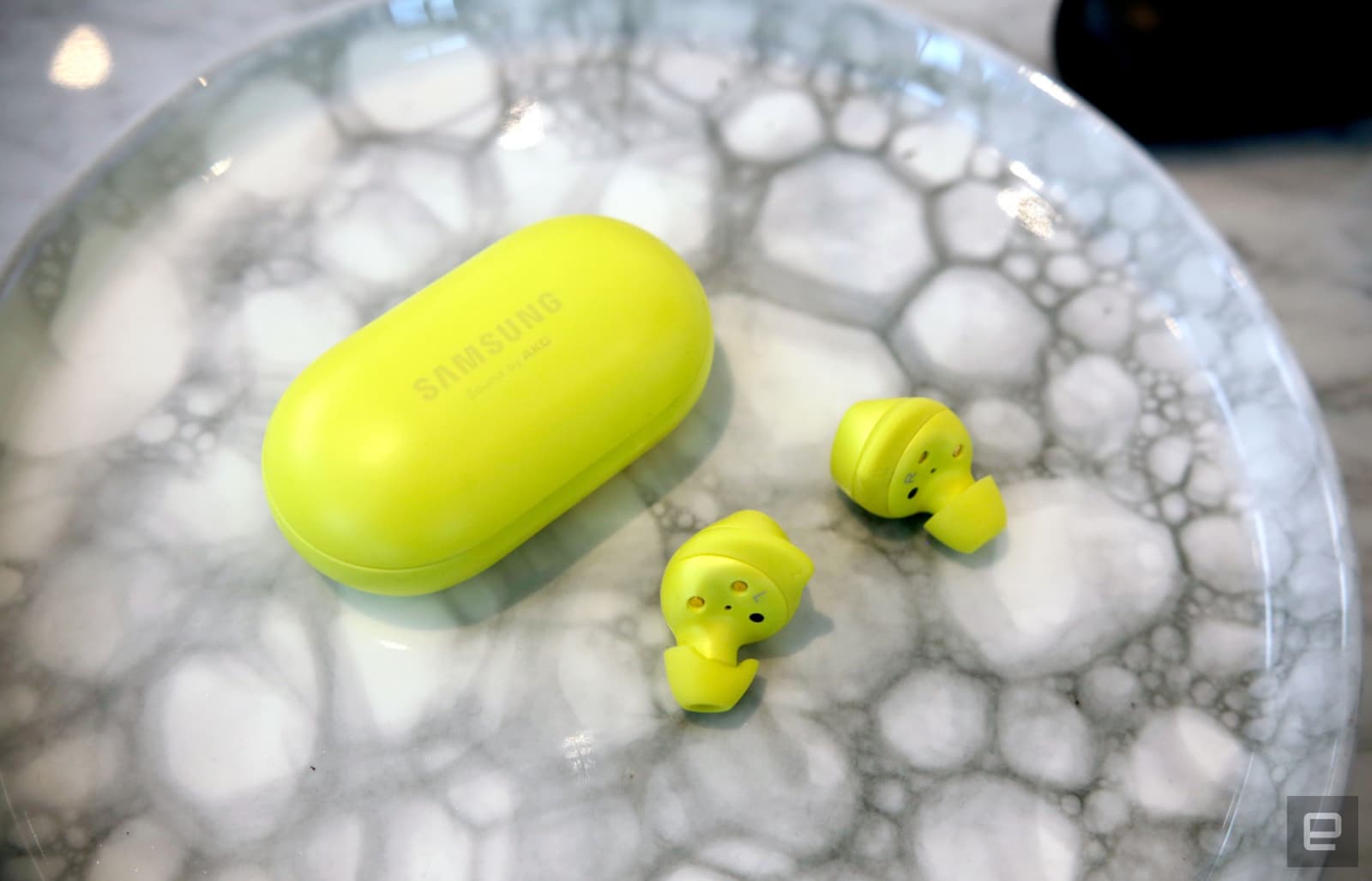 In terms of battery life, Samsung says you can expect up to six hours of music on a charge, and up to five hours of calls. The included case holds an additional seven hours worth of battery life if you need to charge up while on the go. There's also a quick-charge feature that will give you just over 1.5 hours worth of use with a 15-minute charge. And if you really find yourself in a pinch, just place the case on the back of the Galaxy S10 or S10+ to top it off via the aforementioned PowerShare. Samsung also tossed in a quick-pairing feature so you won't have to wait for your Galaxy Buds to sync up with your shiny new phone.

The Galaxy Buds will cost $130 when they go on sale at the end of March, and they'll be available in black, white and yellow. If you pre-order a Galaxy S10 or S10+ before March 7th though, Samsung will toss in a pair for free. If the Galaxy Buds sound good and perform well, Samsung could have a compelling alternative to a lot of the existing true wireless earbuds that are already on sale. They will work with other devices, after all. Most of the best-sounding options right now are around $300. Even the best all-around set -- the Jabra Elite 65t -- still costs $170, and Apple's AirPods are priced at $159. A significantly lower price tag puts the Galaxy Buds closer to an impulse buy than a carefully considered long-term investment. 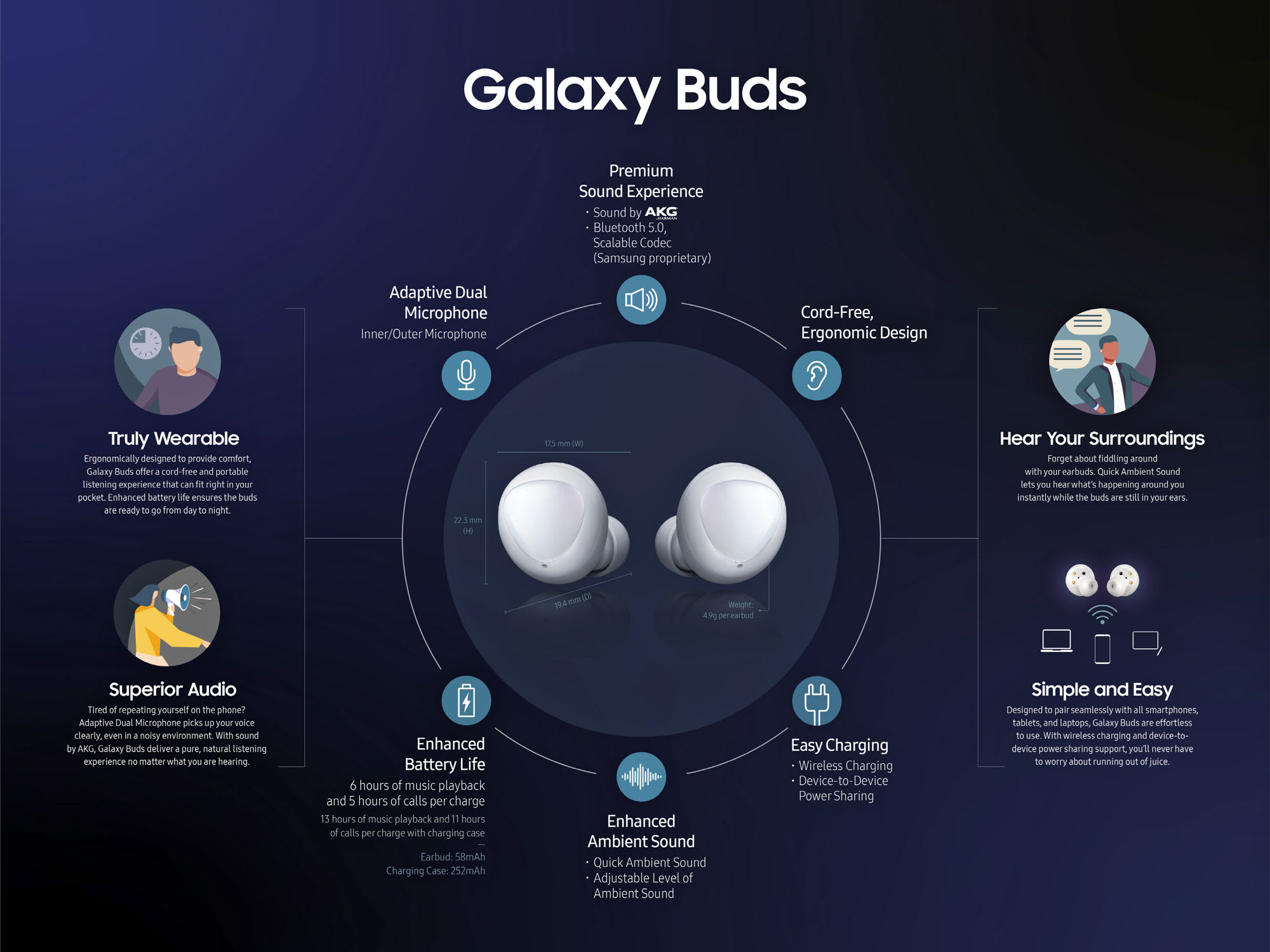