Stellar sound is bogged down by constant frustration.

Not every audio company was quick to jump on the true wireless bandwagon. Some of the big names in headphones took their time crafting a set of earbuds before making a debut. Sennheiser was one of those, and its Momentum True Wireless model didn't arrive until late 2018. Thankfully, the wait was mostly worth it. They have some of the best audio quality I've heard on a set of earbuds like these. But there are a few complaints, and given the nearly $300 price tag, those caveats become major issues. 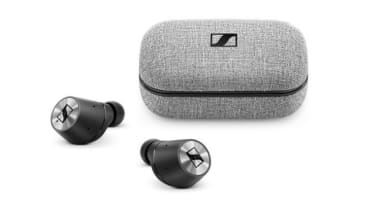 Design-wise, Sennheiser built some of the better-looking true wireless earbuds I've seen. Sure, these devices are tiny, so there's not much room for aesthetic flourishes, but the company kept it simple here and that's a good thing. The Momentum True Wireless earbuds are simple and round instead of slightly larger, rectangular housings like much of the competition. And the aluminum touch panels on the outside are much more attractive than plain black plastic. The buds are smaller than most, so they tuck nicely into your ear. They don't stick out quite as much as models from Bose, Sony and others, which means you look slightly less awkward when you wear them out in public. They're also lighter and far more comfortable to wear for long periods of time. Even the cloth-covered charging case is surprisingly pretty.

On the buds themselves, instead of physical buttons, Sennheiser opted for touch controls. These were the source of most of my frustration. First, there are several actions that require multiple taps or a press and hold, both of which are difficult to master. Volume changes, for example, are done with a long press on the left earbud to turn down or on the right to turn up. All playback controls -- play/pause and skipping tracks -- are on the left earbud while all the call and audio-transparency controls are on the right. After weeks of use, I still can't get the touch features to work on the first try for things that require multiple taps. And when that list includes key controls like skipping tracks, this becomes a major issue. 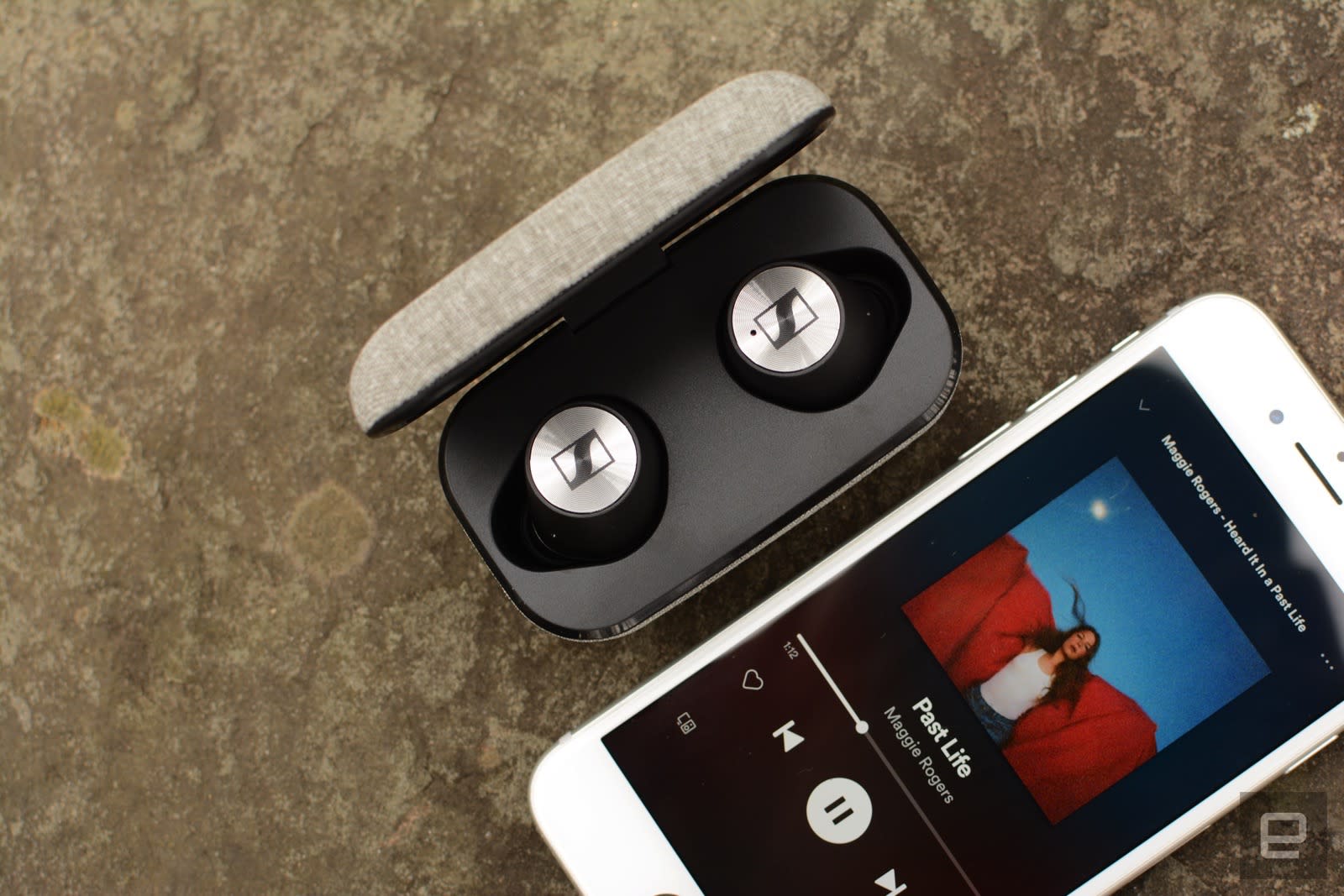 Part of the problem is that the controls aren't intuitive. There is a walkthrough in the companion app during the initial setup and a reference guide that's easy to find, but I had to consult it way too often. It's just a headache. I don't want to have to look up how to put earbuds in pairing mode every time I switch devices. For the record: You tap and hold on both earbuds for five seconds -- not exactly the first thing that comes to mind when you're trying to access a basic feature.

In terms of sound quality, Sennheiser has tuned the best-sounding true wireless earbuds I've tested. And really, it's not even close. Before now, the audio on Master & Dynamic's MW07 was top of my list, but the Momentum True Wireless has comfortably taken over. Sennheiser's model exhibits an openness to the sound that rivals over-ear headphones. There's a depth to the audio that gives the illusion of actually listening to a roomful of musicians rather than just instruments on a recording. Drums sound big and bold with bass kicks and snare hits that have much more oomph than on other true wireless earbuds. You really get a sense of this on tracks like Nine Inch Nails' "Into The Void," Florence + The Machine's "What Kind Of Man" and Massive Attack's "Unfinished Sympathy."

This is thanks in part to a well-tuned EQ. Those drums and other sounds wouldn't come across nearly as well without proper equalizer settings. There's plenty of bass and it's punchy too, but fans of hip-hop and other low-end-heavy styles may crave a smidge more. Personally, I like a lot of bass, and I was pretty happy with the sound out of the box. Ditto for treble. It offers a solid complement to the other frequencies without overpowering or becoming too screechy. You can tweak everything with the EQin Sennheiser's Smart Control app, though the changes it allows are limited. I found the default tuning to sound better than any of the alternatives I tried. 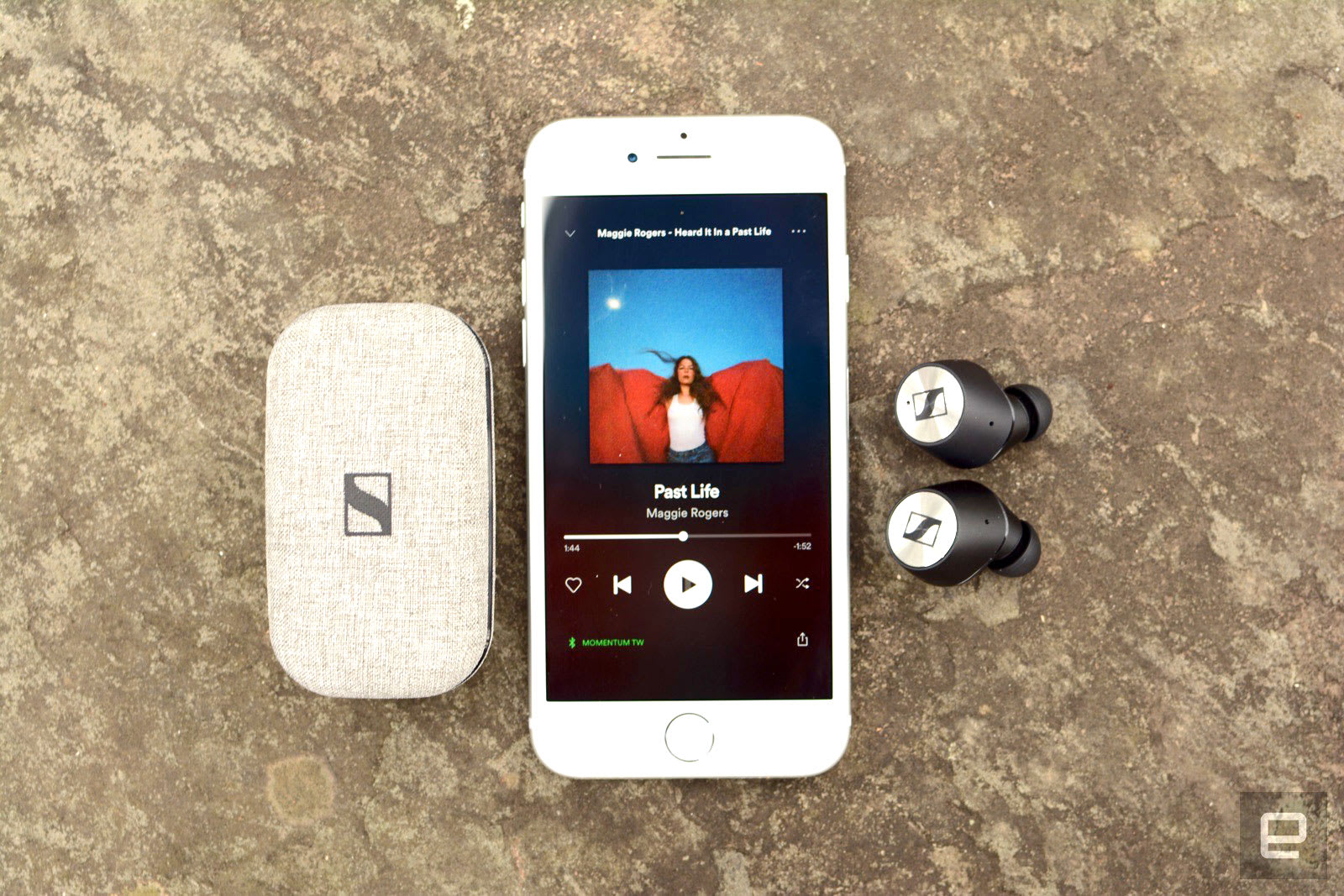 The software will also give you battery levels for each bud and offers control of the Transparent Hearing feature, a tool that allows you to hear what's going on around you while listening to something else. Since the multi-tap touch controls on the earbuds themselves were a source of great frustration for me, I found myself just using the app to turn that on when I needed it. You can also toggle other features in the app, like access to a voice assistant or Smart Pause, which automatically pauses whatever you're listening to when you take one of the earbuds out of your ear. Most people will want to leave these things enabled, but it's nice to know you have the option to disable them should you feel the need.

Smart Pause, while handy, was a source of some headaches. The feature works well when you remove one earbud. As advertised, it will pause the music, podcast or whatever you have playing so you can have a conversation or order a cortado. However, the second you remove the other earbud, the music resumes. It's so annoying that anytime I had to take both out, I just put them in the case to avoid the low, grungy hum of the Deftones while I was trying to chat with someone.

When you put the buds in the case, they don't automatically turn off like they're supposed to. Ditto for automatically turning them on when you take them out. If you're listening to music when you nestle the Momentum True Wireless in its case, it will pause, but if you tap "play" on your phone, it will start right back up. The earbuds remained connected to my phone and powered on the whole time. If the case was plugged in, they would consistently turn off, but in my experience, simply stowing them in the case wasn't enough to turn them off or disconnect them from my phone. Sennheiser says the reason for my headaches is that the automatic shut-off feature only works when there's still battery left in the case. If your case is completely dead, the buds won't turn off when you put them away. Again, yet another source of frustration. 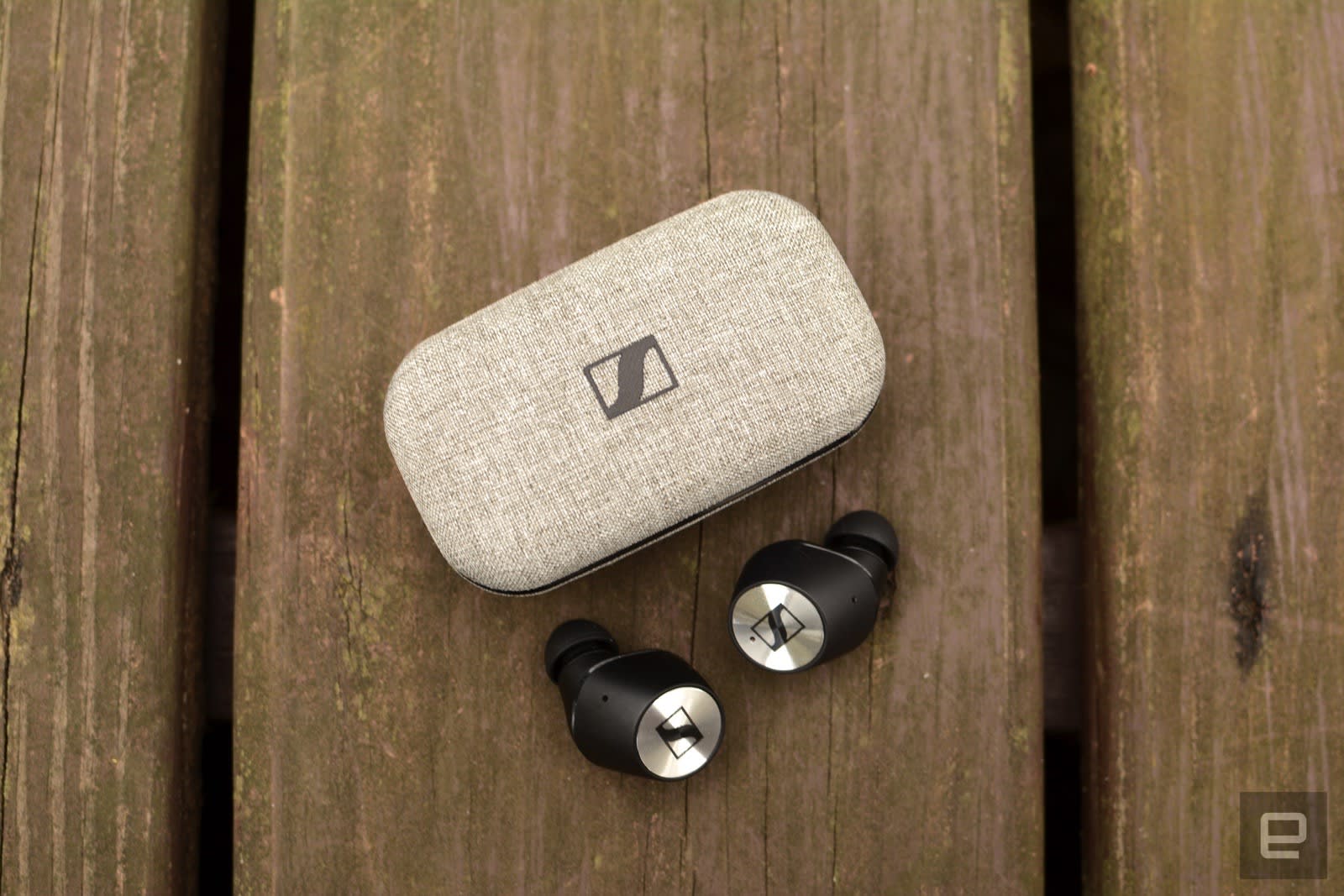 The Momentum True Wireless are plenty comfortable. Well, as comfortable as having something shoved in your ear canals can be. The earbuds come with three sets of tips, or "ear adapters," as Sennheiser calls them, to help you find the coziest fit. With some true wireless earbuds, I start to feel discomfort after an hour or so, but that wasn't the case here. There aren't any wings or nubs to keep the buds in place during a workout, but I didn't have any trouble with them falling out at the gym. The Momentum True Wireless is only IPX4-rated, or splash resistant, so you should look for another option if you plan to get super sweaty.

Battery life is always a primary concern on devices like the Momentum True Wireless, but Sennheiser has done a solid job. The company says you can expect up to four hours of playback on a charge, and I was able to muster just under that before needing to tuck the buds away to recharge. This isn't too concerning, since I almost always used the Momentum True Wireless at full volume, which will certainly eat up the battery faster. The included case offers an additional two charges available when the time comes to power up. It also has a battery indicator beside the USB-C port, so you'll know if you're at zero percent, below 50 percent or above 50 percent battery level based on the color of the LED. 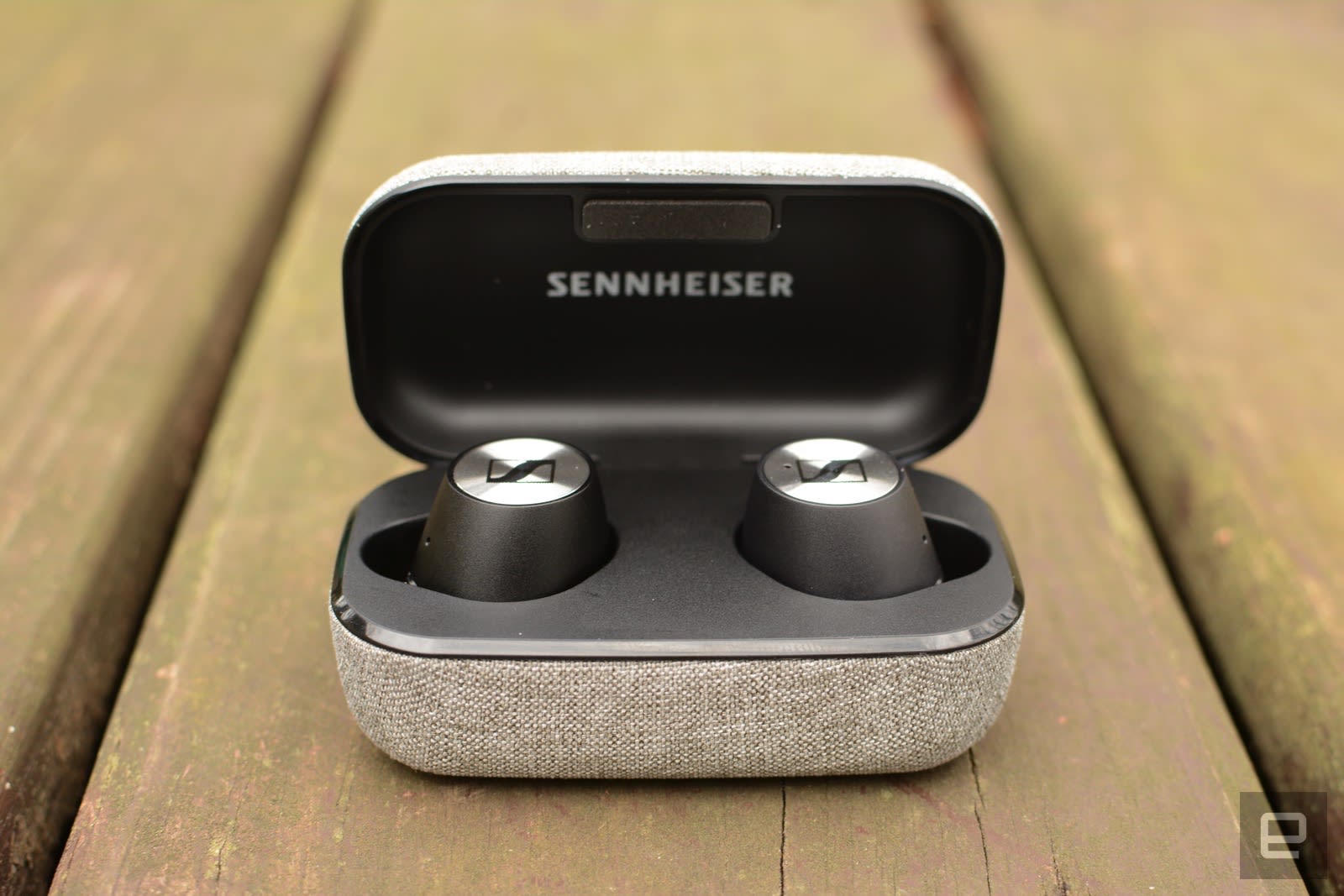 I've read reports of issues with Bluetooth connectivity, but I never encountered any problems there. The Momentum True Wireless easily paired with both my iPhone and my MacBook Air, and I didn't experience any dropouts or other issues with the connection. These earbuds will only pair with one device at a time though. Having both my phone and my laptop connected is a luxury I've enjoyed with the Jabra Elite 65t and other units. It's probably not a dealbreaker for most people, but it's certainly something to consider.

Sennheiser shows off its audio prowess with its first true wireless earbuds, but the Momentum True Wireless is hampered by a number of annoying issues. Despite best-in-class audio, frustrating touch controls, a puzzling Smart Pause feature and unreliable automatic shut-off keep it from being truly great. And that's problematic for a set of $300 headphones.