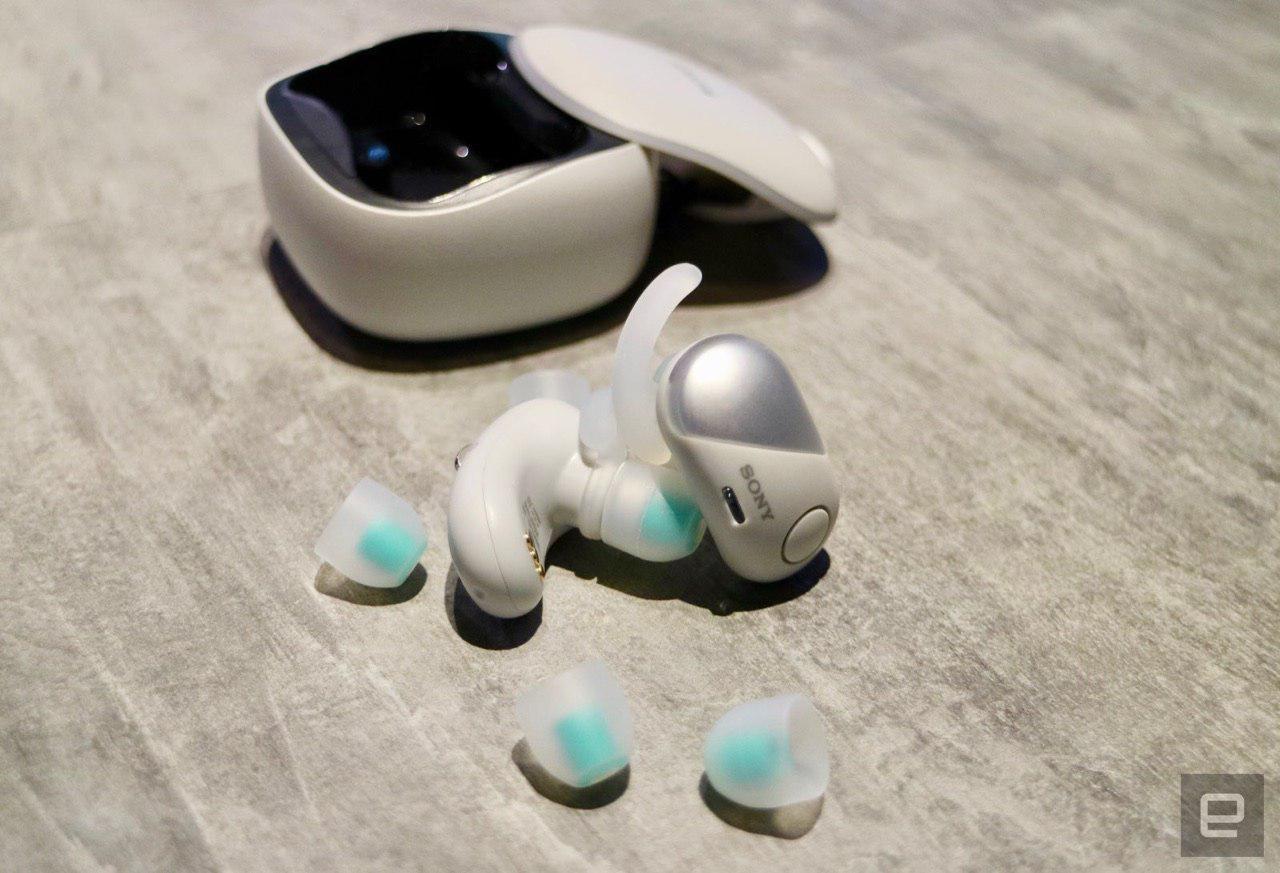 During last night's press event, Sony revealed its latest sports earbuds with totally wireless and wireless models -- two of which feature active noise cancellation. Now that CES is officially open, I stopped by the company's booth to try out the in-ears that interest me most: the totally wireless WF-SP700N. After a few minutes of listening, I was quite impressed. Over the last year or so, the number of true wireless earbuds has increased exponentially. New companies are popping up with the devices all the time and most of the big names in audio have announced models of their own. In fact, Sony debuted its WF-1000X back at IFA, but the WF-SP700N that's here at CES has had the sporty treatment. This includes IPX4 rating that protects the tiny audio devices from sweat and moisture at the gym or during a run. In fact, Sony claims it's the first to put active noise cancellation in a pair of true wireless water-resistant sports earbuds.

Like a few of Sony's other audio gadgets, the WF-SP700N features an ambient sound mode, so you can let a bit of outside noise in while you're listening to that Yacht Rock playlist on Spotify. And like most other totally wireless earbuds, they come with a charging case that can offer two full charges or a 15-minute quick charge. Should you need the latter, Sony says 15 minutes will give you up to 70 minutes of listening time. When fully charged, expect up to three hours of battery life at a time with the WF-SP700N and nine hours total when you factor in the case. That's on the lower end of what I've seen recently, with most companies claiming around five hours of playback on a single charge.

After a few minutes listening to the earbuds, I came away quite impressed by the audio quality. The WF-SP700N has punchy highs and a solid amount of bass that's not overpowering. I've found these true wireless devices tend to lack a healthy dose of base a lot of the time, but I'm happy to report that's not the case here. The bass is slightly better on the Bose SoundSport Free I've been using for a while now, but that model is also a bit more expensive. I'll take a bit less low-end tone for the $70 difference.

Like most of what Sony announces at CES, the company says the WF-SP700N will ship this spring. When it does, expect your choice of white, black, yellow and rose gold/gray color options when you're ready to part with $180/£190 to grab a pair. That's not a bad price considering some totally wireless earbuds cost $250 or more.

In this article: audio, av, ces2018, gear, hands-on, sony, WF-SP700N
All products recommended by Engadget are selected by our editorial team, independent of our parent company. Some of our stories include affiliate links. If you buy something through one of these links, we may earn an affiliate commission.